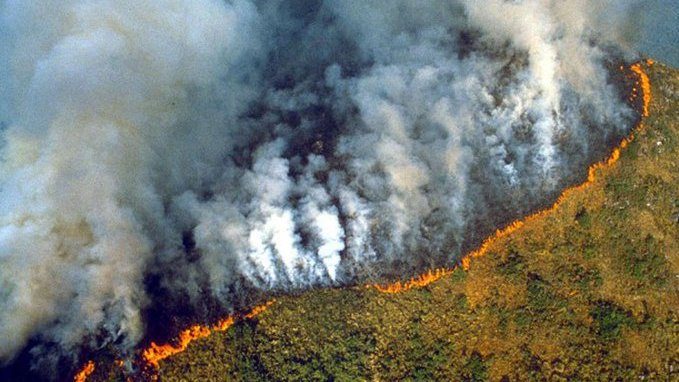 Amazon forest was also known as the ‘Lungs of the Planet’ that produces 20% of the Earth’s oxygen. The Amazon rainforest spans in nine countries Bolivia, Brazil, Ecuador, Peru, Colombia, Venezuela, Guyana, Suriname and French Guiana, however, Brazil constitutes 60% of the rainforests. The rainforest is house to 40,000 plant species, 2,200 types of fish, 430 amphibian species and 380 reptile species. Also, there are around 400 to 500 Amerindian tribes that live across the Amazon rainforest.

Also Read: 10 Most Beautiful Forests In The World

Why is the Amazon Rainforest on Fire?

Now, these forests are on fire from last few days and nobody is taking it seriously, however, this is a serious situation that must be dealt with full care by the Brazil government agencies. There are around 2,500 fires currently burning across the rainforest and now they are emitting a huge amount of carbon and the smoke can be seen from thousands of kilometres away. There are various data that suggest that fires in Brazil increased by 85% in 2019.

The fire has been erupted because of land degradation, land clearing and farming that reduces the availability of water and hence warms the soil and increases the chance of drought, later, combining all these factors, it will constitute to fires and make it more fierce. It is not the first time that the forces have erupted in Amazon but the intensity of fires this time is very fierce because of illegal forest clearing to create land for farming. The need for land for cattle farming in Brazil has increased quite significantly and it is one of the reasons for increasing deforestation. Also, the rate of deforestation has been increased under President Jair Bolsonaro who took office on 1st January 2019 and number of fires rose by 84% since last year.

Also Read: Why Amazon Rainforest Are So Important? & Why We Should Care?

The world should care about the Amazon rainforest firest because it will affect the biodiversity of the world. It will directly reduce the rain across South America and other regions of the world as well. All human activities are inducing Carbon into the atmosphere and this kind of natural devastation also increases carbon content in the atmosphere that will induce Global warming. All countries have set target by signing the Paris Agreement to slow climate change.

The Brazilian government has set a target to reduce/stop illegal deforestation and restore 4.8 million hectares of degraded Amazonian land by 2030, however, this target will be impossible if we fail to stop these fires. Both Brazil national and state government have come forward to protect Amazon. Also, international actors are playing a key role.