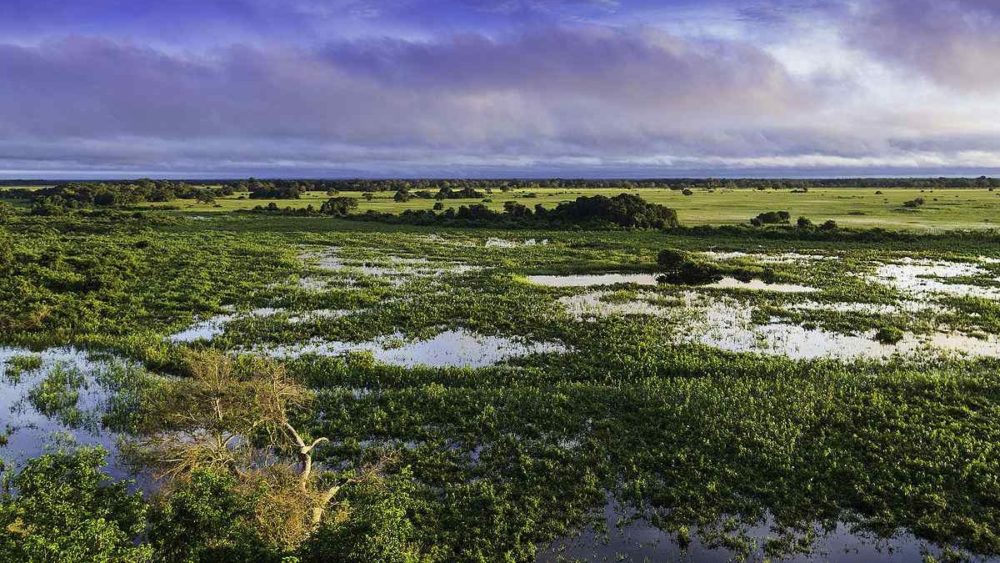 Wetland is a distinct ecosystem that is created when water meets land. This can exist either permanently or seasonally. Wetlands play a vital role in the survival of human life because of their ability to performing various functions like water purification, water storage, processing of carbon and other nutrients, stabilization of shorelines making it different from other lands. They are the habitat of many plants and animals as well. Wetlands are found in all the continents. Apart from being most biologically diverse of all ecosystems, wetlands are treated to eyes as well. Let’s have a quick look on top 10 wetlands of the world.

Major Wetlands in the World

Kakadu wetlands, located in the northern territory of Australia, is spread nearly to 20,000 square kilometers. Kakadu is home to exceptional natural beauty and unique biodiversity. It has been inscribed as a World Heritage listing because of both its cultural and natural values. Kakadu is basically a photographer’s dream as it offers a variety of breath-taking scenes. Not only rich in natural beauty, but it also has plenty of native wildlife. If you are a fan of wildlife, then this place definitely should be in your bucket list.

Pantanal, the world’s largest freshwater wetland, is a seasonally flooded plain nourished by the tributaries of the Paraguay River. It is considered to be one of the world’s most gratifying habitats. During the rainy season, it becomes home to 260 species of fish. During the dry season as water quantity decreases, many birds and other animals migrate to Pantanal. About 80 percent of the Pantanal is in Brazil, the rest of the parts being with Bolivia and Paraguay. Pantanal is a habitat to a diversity of species of birds and animals.

The city of Arles, France hosts one of the famous wetlands in the world known as Camargue. The bay time to visit the Camargue Natural Park area is during Spring and the Autumn because during that time thousands of birds migrate to the park’s wetlands. Bird-watchers from all over the world visit Camargue in huge numbers during this season. Flamingos being the main attraction, lots of tourists visit Camargue to admire its natural beauty and diverse wildlife. A large area of this park is UNESCO designated biosphere reserve.

Located in south-western Vietnam, Mekong Delta is the region where the Mekong River merges into the sea through a network of tributaries. Covering an area of 40,500, this region encompasses a large portion of south-western Vietnam though the size of the area covered by water is totally dependent on the season. Mekong Delta is home to a variety of flora and fauna. It is known to be the most productive region in agriculture and aquaculture in the whole of Vietnam. Mekong Delta is often called a rice bowl of Vietnam.

Also Read: Top 10 Most Beautiful Parrots In The World

Residing on Merauke Regency, Wasur National Park is the largest wetland area in Indonesia. Eminently preserved by the WWF, this park has been designated as Wildlife Reserve. Due to its diverse ecosystem and high biodiversity, this park is one of its kind, which gives birth to its other name “The Serengeti of Papua”. The park is home of approximately 358 bird species, out of which around 80 species are endemic to Wasur. Around 111 species of fishes are found in this eco-region and a large number of these are recorded as originating in Wasur. This park is definitely heaven of bird watchers and nature lovers.

To prevent saltwater from the sea from infiltrating onto the freshwater which is used for irrigation purposes, a barrage has been constructed near Thanneermukkom. Many rare species of aquatic life and animals live in and alongside the backwaters. The tranquil backwater cruises are a once in a lifetime experience. Alappuzha, popularly known as the ‘Venice of the East’, hosts world-famous houseboat cruises which make one soak in nature at its finest form.

Okavango Delta of Botswana exists like a dazzling ornament at the heart of the Kalahari Desert. A maze of gleaming pools, rambling channels and astonishing islands teeming with unique wildlife consolidates together to describe Okavango Delta. It is sometimes called “the river that never finds the sea” as most of the water is lost to evaporation and transpiration instead of draining into the sea. It’s glaring channels spread over the deserts of the Kalahari. It is a habitat to a variety of animals like elephant, hippopotamus, giraffe, crocodile, lion, cheetah, rhinoceros and zebra.

Everglades National Park protects an exceptional mural which attracts millions of tourists from all over the world. It is a habitat of many unique and endangered species like the manatee,  American crocodile, and the elusive Florida panther. It won’t be wrong to call it an international treasure as it is won the titles of World Heritage Site, International Biosphere Reserve, a Wetland of International Importance, and a specially protected area under the Cartagena Treaty. Everglades is located in south Florida, the USA had 1.5 million acres of wetland.

The Sunderbans ecosystem is an astonishing natural wonder of South Asia as well as of the world. This amazing delta lies in West Bengal, India and stretches to Bangladesh. Sunderbans, being the largest halophytic mangrove forest in the world has an area of approximately 10,000 square kilometers. This delta is a combination of delta’s of two major Indian Rivers, The Ganga and the Brahmaputra. Sunderbans is famous as the kingdom of the Royal Bengal Tigers. Due to the abundance of Sundari trees in this area, it was named Sunderbans and is a tiger and biosphere reserve.