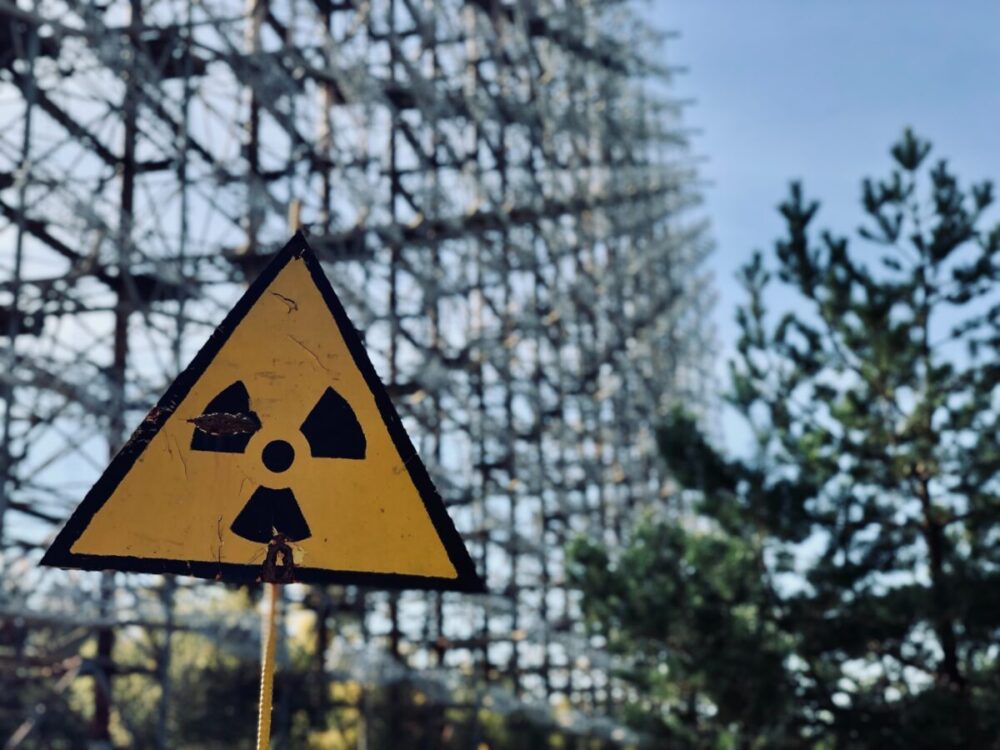 As the site of the deadliest nuclear accident in the world, Chernobyl is now a surprisingly sought-after tourist destination. But deadly radiation still pervades the landscape around the zone, so why is it safe to visit Chernobyl at all? It was nearly a decade ago when Ukrainian officials opened the site to tourists, declaring that visits were safe–though tours would regulate strict precautions. Since then, thousands of visitors have flocked the Exclusion Zone. Even though it was confirmed by experts that large doses of radiation can cause acute sickness, tissue damage, and increase the risk of cancer.

Nevertheless, human beings and other living organisms are bathed every day in radiation. The sources of these emissions are cosmic radiation from the sun and stars, terrestrial radiation emanating from the Earth itself, and some of the natural minerals in the planet’s crust. Nature has existed in these conditions for millions of years of constant low-level emissions. Most living organisms have evolved mechanisms of regeneration and protection to survive.
However, the case is different for Chernobyl. The Exclusion Zone’s source of radiation is a fine dust that contains radioactive elements from the content of the reactor. And this dust is being dispersed by the weather around the whole territory. That’s why to ensure no contamination occurs during visits, tourists are advised to move strictly on the safe routes and follow the guide’s instructions. For your safety, here are the ground rules for visiting the Chernobyl Zone in details: 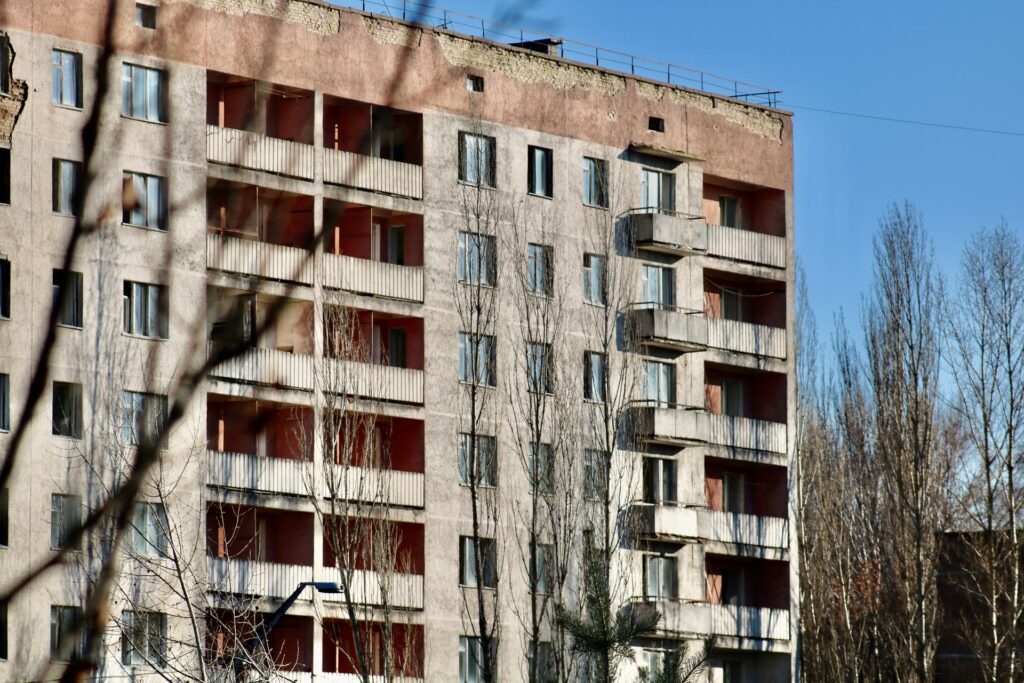 Chernobyl is like going to an open-air museum with Soviet relics. Treat the site the same way you would when you visit the Holocaust or Louvre Museum. Just observe and explore the area. You can take photos, but don’t take anything out of the Zone. Not only is this punishable by law, but there are also perfect explanations why this rule is implemented. As explained by a tour company manager, the goal here is to preserve the Exclusion Zone, as much as possible, for the coming generations. Nature is already starting to reclaim it. Therefore, the company hopes that tourists will be sensitive to the particular challenges of preserving the site. Besides showing respect, the rules are set to keep visitors safe.

In addition, touching any structures, objects, vegetation, or even sitting on the ground is prohibited. Chernobyl is, indeed, still a dangerous place. Even a small piece of fabric that is no bigger than a washcloth, is still, up to this day, emitting scads of gamma and beta particles. Of the two, the beta particles, the most dangerous sources of radioactive contamination, are the ones you will acquire when you touch anything in the 10km Exclusion Zone. By the same token, it is also prohibited to put any belongings on the surfaces of the buildings or the ground. By doing this, you are putting your belongings at risk of getting contaminated. Upon exiting the zone, however, visitors will be checked for radiation at the same checkpoint. To learn more about what will happen during the tour, you can visit chernobylstory.com for more information.

Stay With The Group and Don’t Wander Off 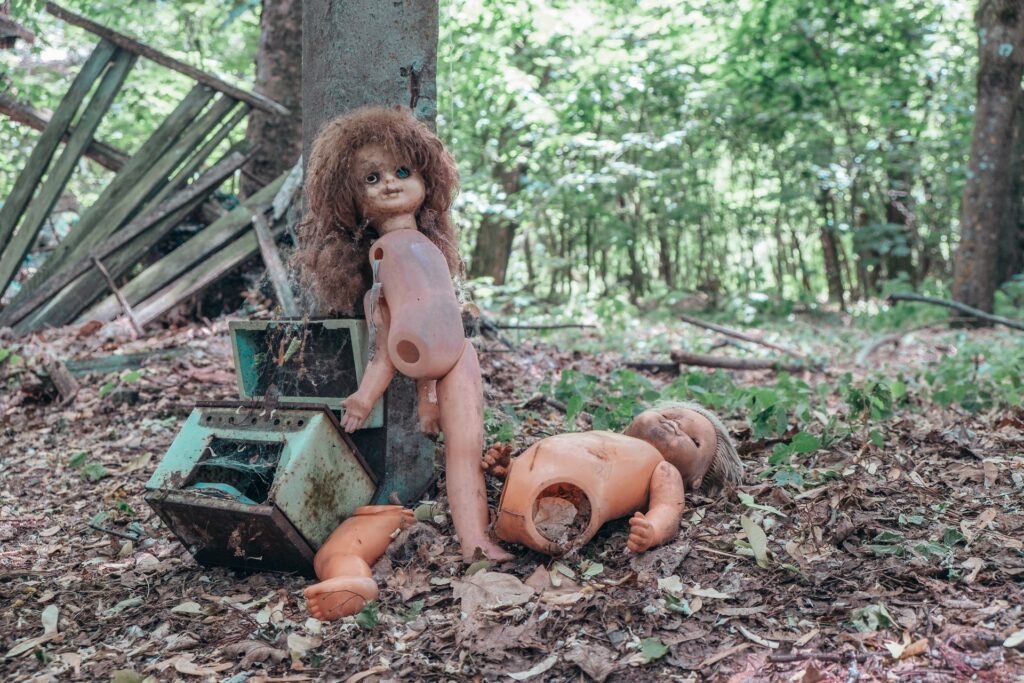 On-going radiation-safety protocols prescribe that visitors are restricted to specific areas and are not allowed to wander on their own. Since the operation of tours inside the Exclusion Zone, tour guides make sure the visitors understand that there are still several radioactive “hot spots” in the site that are more contaminated than others and insist no one should wander off the designated routes. Normal tours will take you around the Duga radar, the city of Pripyat, and to the memorial viewpoint just outside the power plant.

There are a significant number of abandoned villages in the zone, and all are quite fascinating to view. Tourists can see small cottages, farmhouses, and plenty of vegetation. Be careful entering any of these uninhabited areas, especially the forest, as vegetation always carries far higher levels of remaining radioactivity than concreted places. Claire Corkhill, a nuclear-waste-disposal researcher at the University of Sheffield, clarified that the exclusion zone contains a “vast forested region” that hasn’t been decontaminated. Since it’s impossible to clean the soil underneath the trees. Furthermore, tour guides will also remind visitors all the time not to step on the dust in dried-out puddles, and the moss for it tends to concentrate radioactivity.

Don’t Eat Inside The Zone 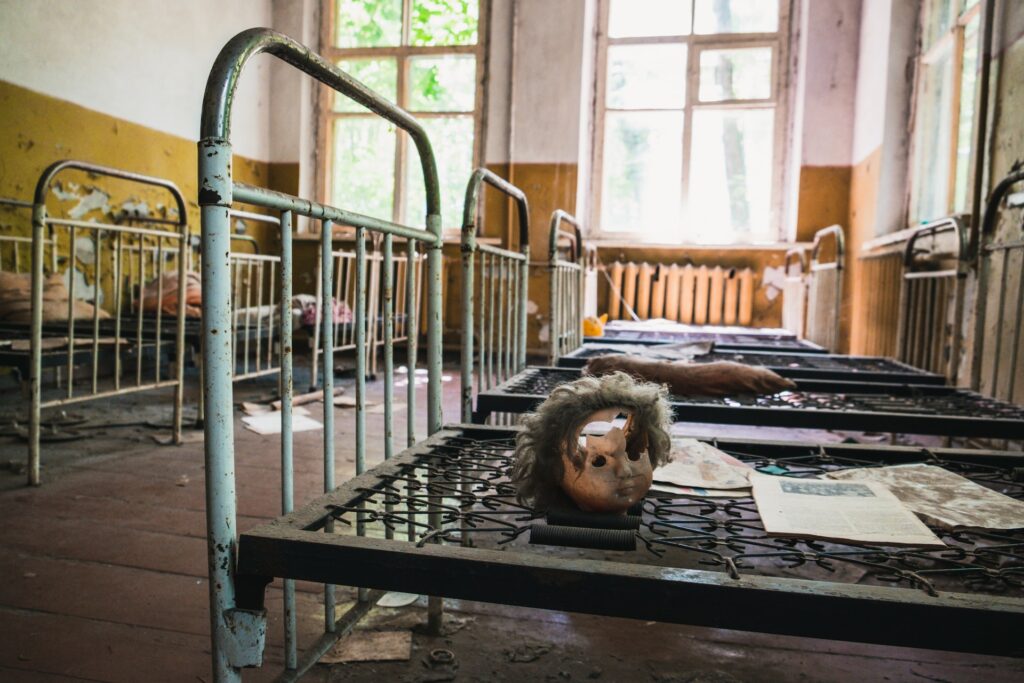 It is prohibited to eat in the open air during your tour in the 10km Exclusion Zone. There’s a small chance for radioactive particles to be ingested or get through the body while eating in the open air. Instead, you could take a break and eat at Canteen 19, Chernobyl’s most popular dining hall, where food is cooked from the ingredients brought from the outside of the site.

The canteen offers a menu of solid Eastern European prices, including schnitzel, kompot, borscht, and sweet, cream-filled crepes. Coffee machines are also available but it’s often out of order. Visitors are obliged to come through a radiator detector before entering the cafe. The inside of the restaurant looks like an institutional lunch-line serving style similar to that of a grade school cafeteria. Yet, for most guests, the best part of Canteen 19 is the pack of puppies that gather outside the cafeteria–the descendants of pets left behind during the evacuation. However, tourists are again warned not to touch them, as there’s a slight possibility that radioactive residue may cling to their fur. Also, if you’re wondering what is allowed during your visit to the zone, visitors are only permitted to drink bottled water. It’s forbidden to use or drink water from open sources like rivers and lakes as they too can be contaminated. 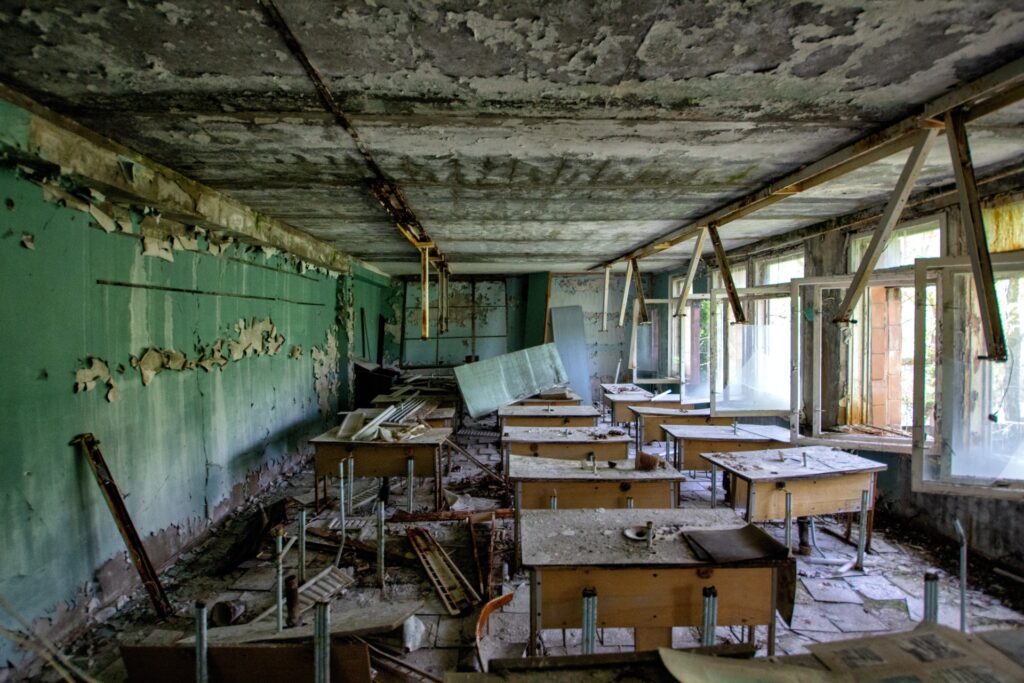 As mentioned, there are a great number of abandoned areas surrounding the Chernobyl Exclusion Zone. One of the famous ghost towns is the city of Pripyat which was once housed by 50, 000 residents. Other sights to see are the kindergarten, educational institutions, cinema, gymnasium, public buildings, not to mention the stunning cultural place which contains a swimming pool overlooking the famous Ferris wheel. As of July 2008, most tours were banned to enter any crumbling buildings due to their current structural stability–with decaying wooden floors and littered broken glass, debris, and concrete scattered in the place. It’s important to be cautious when passing by these deteriorating premises as there were already reports of accidents that happened here last 2012 when one of the building’s floors collapsed, injuring several tourists. 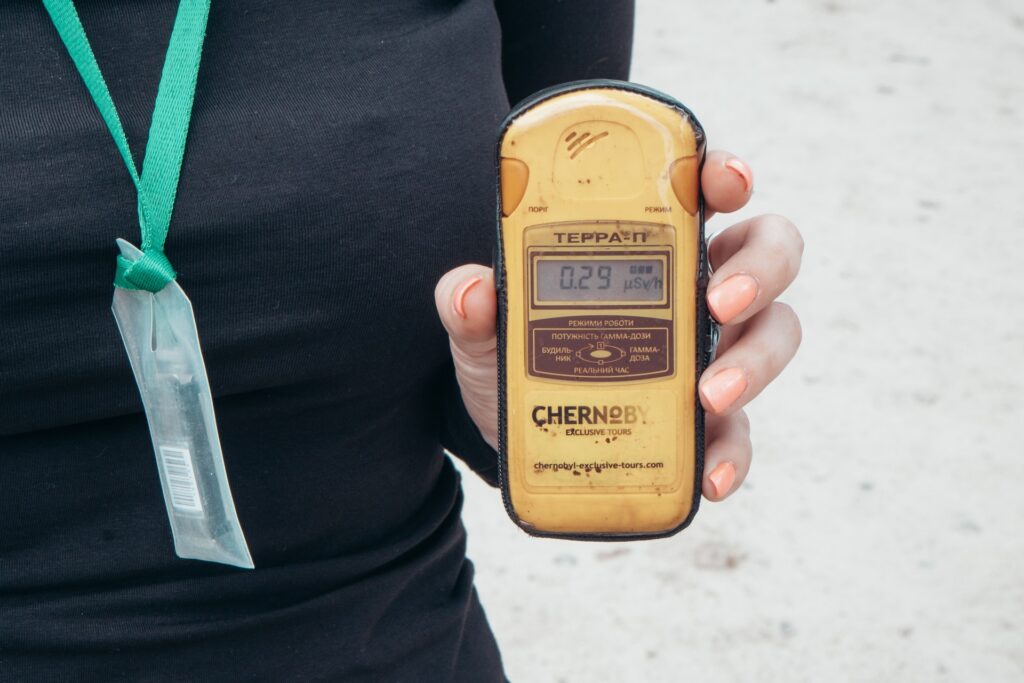 Radiation levels shouldn’t be unsafe or harmful given the short amount of time tourists spend on the site. As explained by radiation specialists, those who visit the zone for less than 48 hours will be exposed to a dose of radiation similar to what is experienced on an overseas flight. That is, as long as visitors will follow the safety guidelines such as the strict dress code. Tourists are not allowed to enter the Exclusion Zone in open clothing and shoes. Wearing shorts, skirts/dresses, sandals, and short sleeves is strictly prohibited. You don’t need any uniforms to be admitted to Chernobyl. What you can wear, on the other hand, are long sleeve shirts, pants, and comfortable closed shoes. The reason for this dress code is to avoid the risk to get the open parts of the visitor’s body being contaminated by radioactive particles. Failure to comply, however, will result in the person’s non-admission to the tour.

Despite the reports that Chernobyl is now safe for tours, tour companies are still concerned with guests’ safety, providing guidelines before and during the excursion. Again, if you’re planning to visit Chernobyl, always follow these main rules: refrain from touching anything in the zone, move strictly on the designated paths and don’t wander alone, do not eat in the open air, never enter any collapsing buildings, and most of all, always follow the strict clothing code–to avoid being contaminated with residual radioactivity.

Rest assured, Chernobyl, as a site of great tragedy, will offer its travelers an unforgettable and emotional experience. As a responsible traveler, be respectful to those who have suffered and of your surroundings. Avoid grabbing anything as a souvenir. Apart from the fact that it may be contaminated, it’s our duty to leave everything as we find it as tourists.