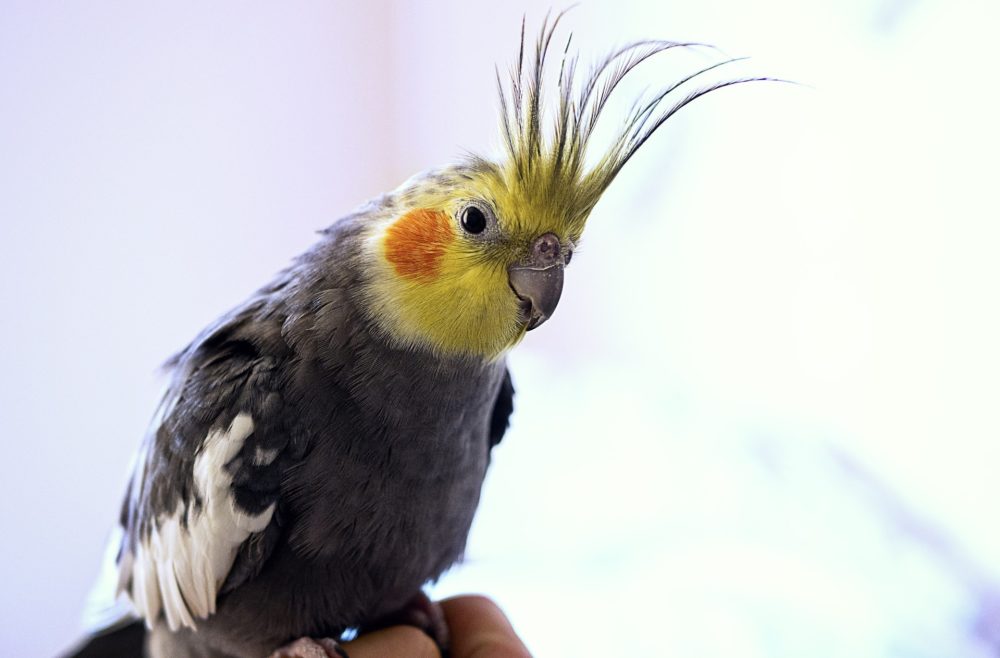 With their colourful plumage and the fantastic ability to mimic human speech, parrots are one of the most popular pets. Parrots also known as Psittaciformes, includes more than 350 species, including parakeets, macaws, cockatiels and cockatoos. They generally feed on seeds, nuts, fruit, buds, and other plant material. Parrots mostly live in the warm areas of the Southern Hemisphere, though they are found in many other regions of the world, such as northern Mexico, Australia, South America and Central America, which have the greatest diversity of parrot species. Here is the list of 10 Types of Small Parrots

The cockatiel is a species which is endemic to Australia. They are famous household pets and ranked second in terms of popularity only next to the budgerigar. Cockatiels are generally vocal parrots, with more varieties found in male species as compared to that of the female. Cockatiels can be taught to sing specific melodies and speak many words and phrases. It is one of the types of small parrots.

The parrot species are very good father and mother are responsible for hatching of the eggs and also taking care of the newborn chicks. They do not allow them to fly off and abandon them because they are quite protective of the family. The species require a good sleep each day that is approximately 14 hours. They are awesome whistlers and some of the species can whistle entire songs. 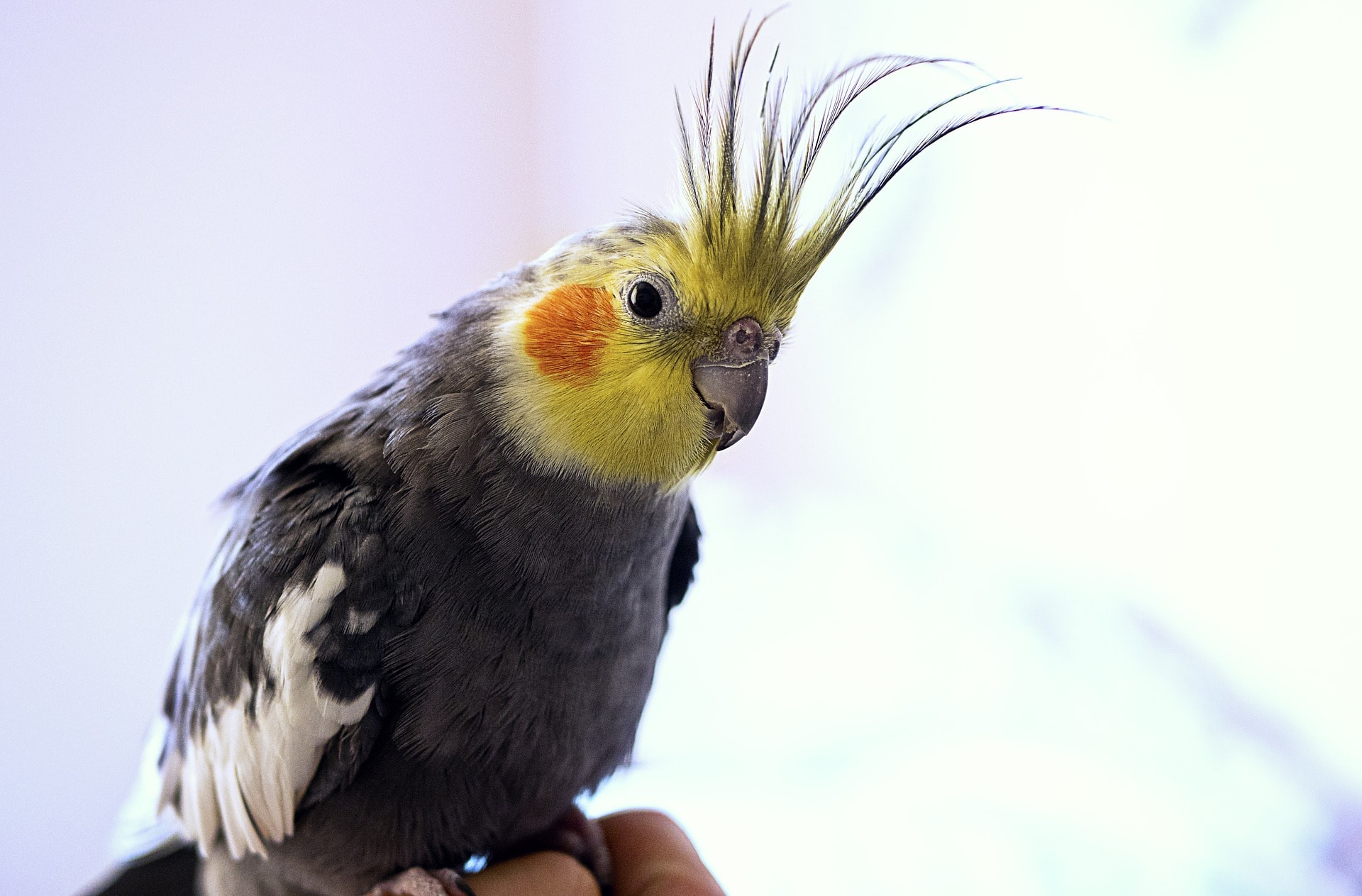 The African grey parrot is a medium-sized, black-billed parrot with an average weight of about 400 grams. It has a darker grey shade over the head and both wings, while the head and body feathers have a slight white edge on them. African grey parrots are famous for its high level of intelligence and incredible speaking ability to mimic sounds made by other animals, including human speech.

It is one of the most popular pet bird species known for their intelligence. There is various research that has been done on the mental capacity of African Grey parrots by researchers across the globe. The most prominent work has been done by the Dr Irene Pepperberg conducted with her famous African Grey, Alex. By using Alex in the trial, it is being said that they have the mental and emotional capacities of a 5-year-old human child. 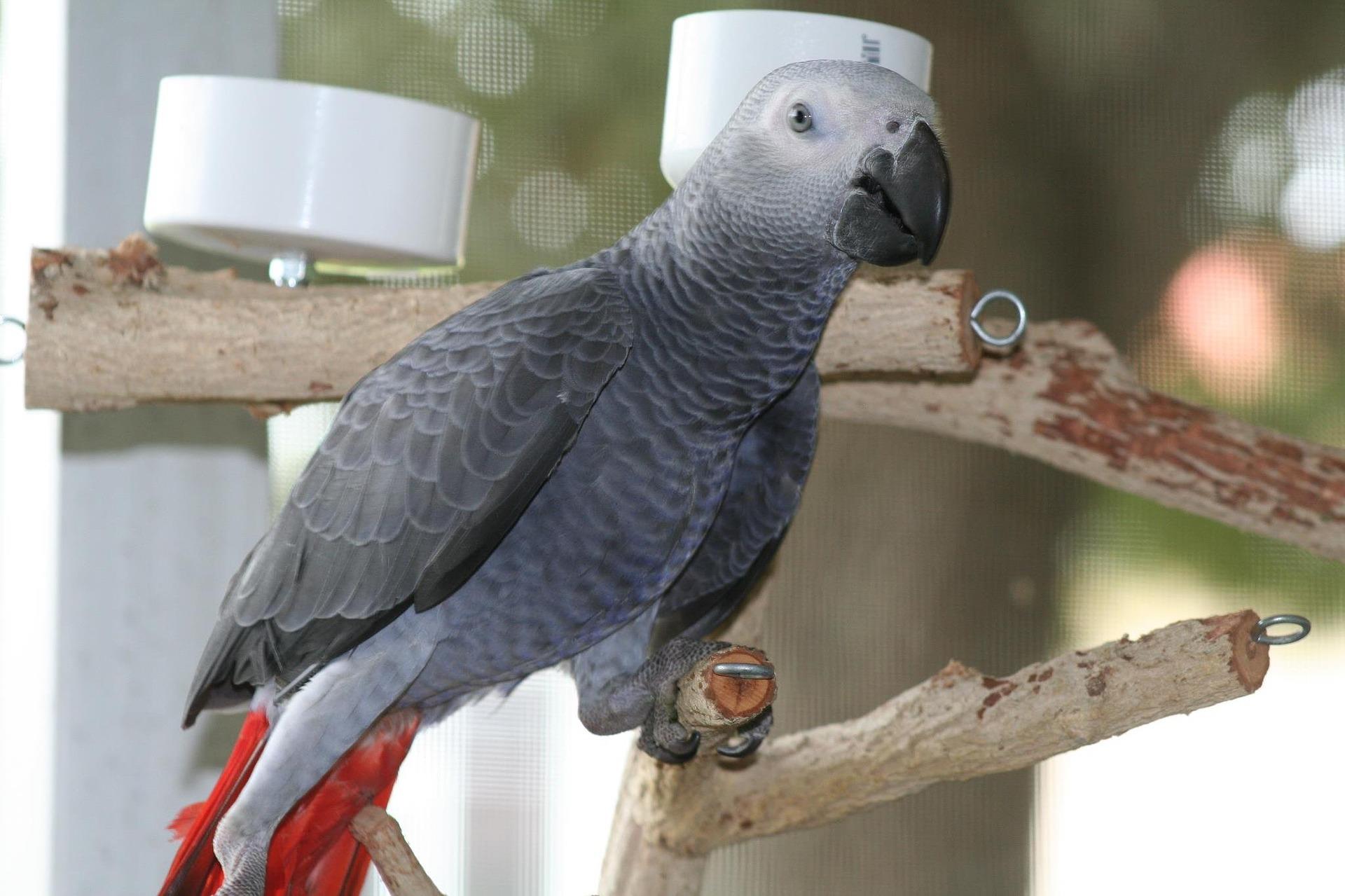 Budgerigar, nicknamed as the budgie, is a small, long-tailed, seed-eating parrot. Budgerigars are the only species in Australia to be found thoroughly in the drier parts of Australia. They generally grow wildly and experience harsh inland conditions for the last five million years. Budgerigars are mostly green and yellow in colour and are also popular pets all around the world due to their small size, low cost and ability to mimic human speech.

Wild budgerigars can grow upto 18 cm (7 in) long and weighs approximately 30 to 40 grams including the wingspan. They have a green body colour including abdomen and rumps, however, backside and the pitch have black mantle markings. Talking about the forehead and face, they are yellow in adults. They can be seen throughout the drier parts of Australia and prior to colonisation, they had survived harsh inland conditions for five million years. 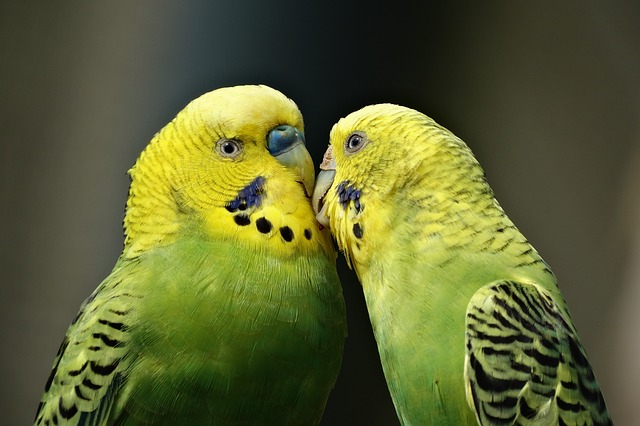 Cockatoos is one of the 21 species of parrot belonging to the bird family Cacatuidae. The Cockatoos parrot species has a mainly Australasian distribution, ranging from the Philippines and the eastern Indonesian islands of Wallacea to New Guinea, the Solomon Islands and Australia. The main difference between cockatoos and other parrots which makes them really unique is feathers on top of their heads. Cockatoos are also recognised by the unique showy crests and curved bills and also their plumage is generally less colourful than that of other parrots.

The average lifespan of the species is approximately 60 years or longer, however, it depends on the species. The oldest known cockatoo in captivity was known as a Major Mitchell’s cockatoo named “Cookie”, It lives in Chicago that lived to be 83 years old. The plumage of the parrot species is less colourful, however, it can be white, grey or black and often with coloured features in the crest or tail. The species is diurnal and it required daylight to find their food. 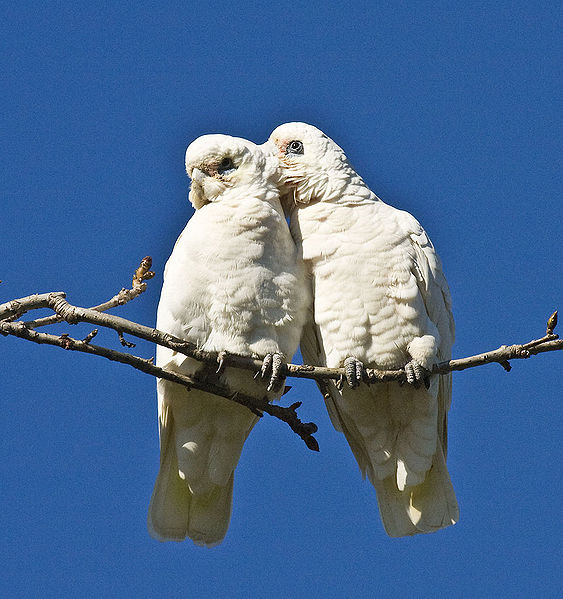 Macaws are most popularly known as the giants of the parrot world. Macaws are native to humid evergreen forests of tropical South America and they can also be found in south-eastern Mexico to the Peruvian Amazon, Colombia, Bolivia, Venezuela and Brazil in lowlands of 500 m up to 1,000 m. It is the national bird of Honduras and is perhaps one of the most easily recognizable birds in the parrot family which is well known for its Colorful and entertaining features.

The Poicephalus also was known as big boned bird comprises ten species of parrots which are native to various regions of the Afrotropic ecozone, including Sub-Saharan Africa, ranging from Senegal in the west, Ethiopia in the east, and to South Africain the south. There are slightly different forms of species but they all generally are stocky birds with short broad tails and relatively large heads and beaks. They feed primarily on seeds, fruits, nuts, and leafy matter. 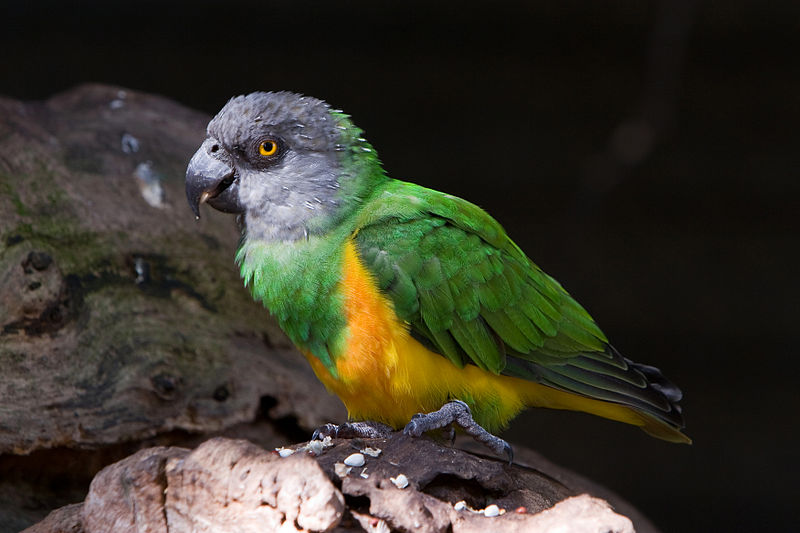 Amazon parrot is medium-sized parrots native to the New World ranging from South America to Mexico and the Caribbean. They have been observed to eat a variety of 33 different foods throughout the year, with seeds forming up to 82 per cent of its diet. Amazon Parrots are striking birds which are found in large varieties of colour and they are also one of the most popular options as pets. Amazon parrots are highly intelligent, loving and incredibly social birds which are often seen in flocks or family groups. 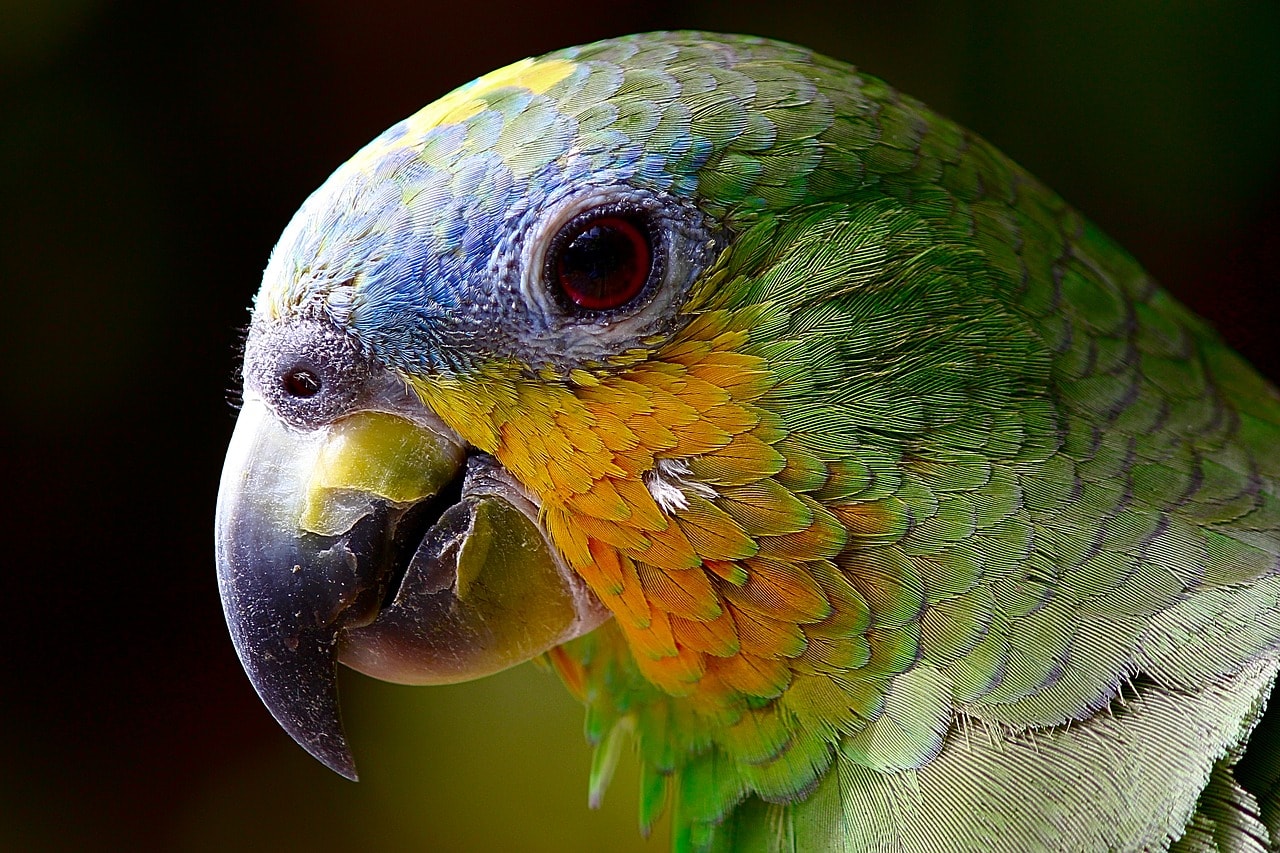 The monk parakeet, also known as the Quaker parrot, is a small, bright-green parrot that has a greyish chest and greenish-yellow abdomen. Native to South America, quaker parrots are commonly found throughout the United States They usually have a long, pointed tail, a large head, and a hooked bill. Many North American cities now have local colonies of Monk Parakeets, established by birds escaped from captivity. 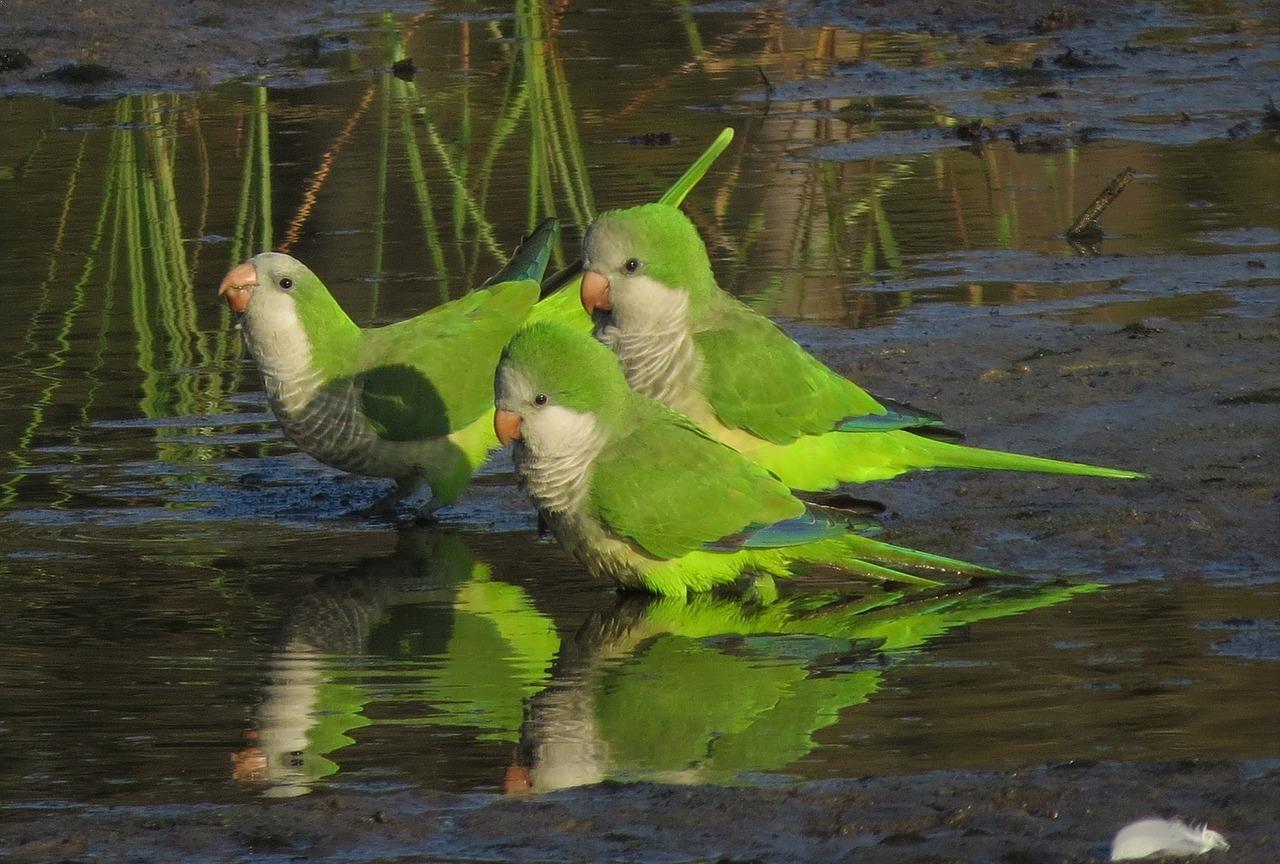 Conures are a diverse, loosely defined group of small to medium-sized parrots. They belong to several genera within a long-tailed group. Conures are intelligent, playful and comical birds that constitute one of the most wonderful pets. There are many different types of conures available, and deciding which type of conure is best for your situation can be quite confusing. 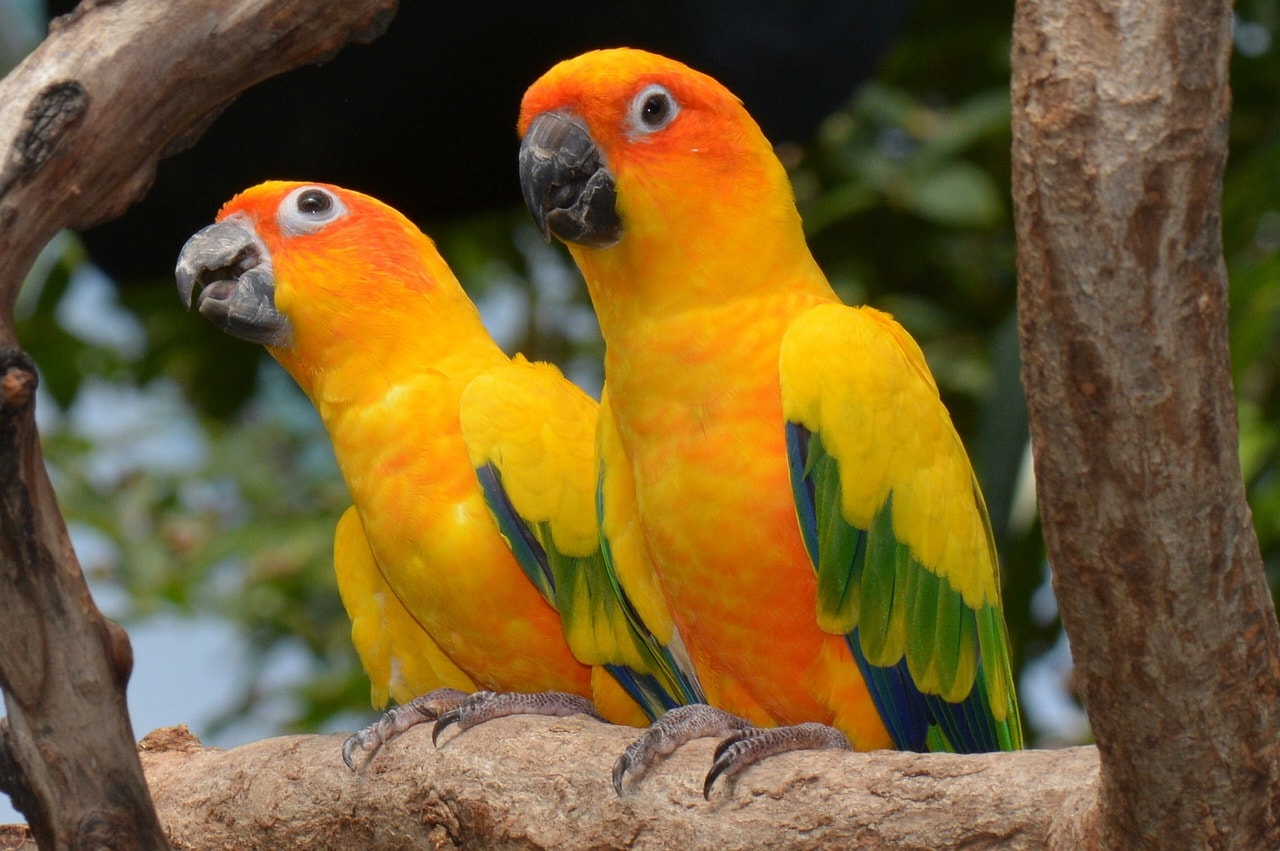 One of the types of small parrots, Pionus are medium-sized parrots native to Mexico, and Central and South America. The White Capped Pionus is the smallest of all Pinous parrots. They are characterized by having the chunky body, bare eye ring, and short square tail. The Pionus is one of the quietest types of parrot that one will ever find. Also, the Pionus parrot is the best-kept secret of the bird world. It has also got all of the good qualities of the popular companion species. 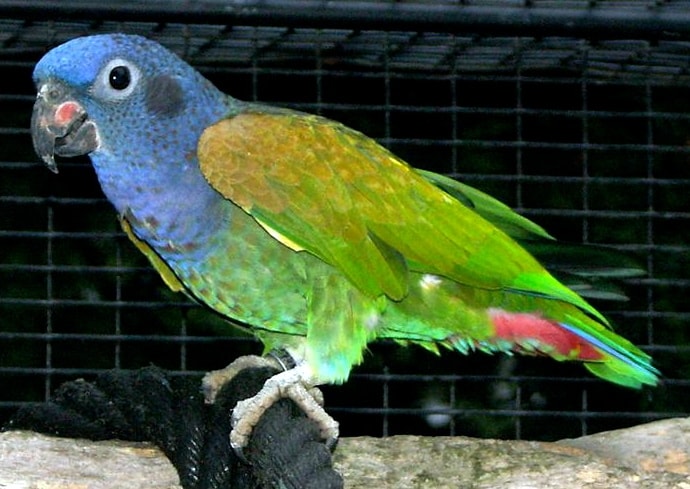 These are the 10 small types of parrots. Do post your comments.

What Happens if the Police Do Not Read You Your Rights?
To Top
We use cookies to ensure that we give you the best experience on our website. If you continue to use this site we will assume that you are happy with it.Ok