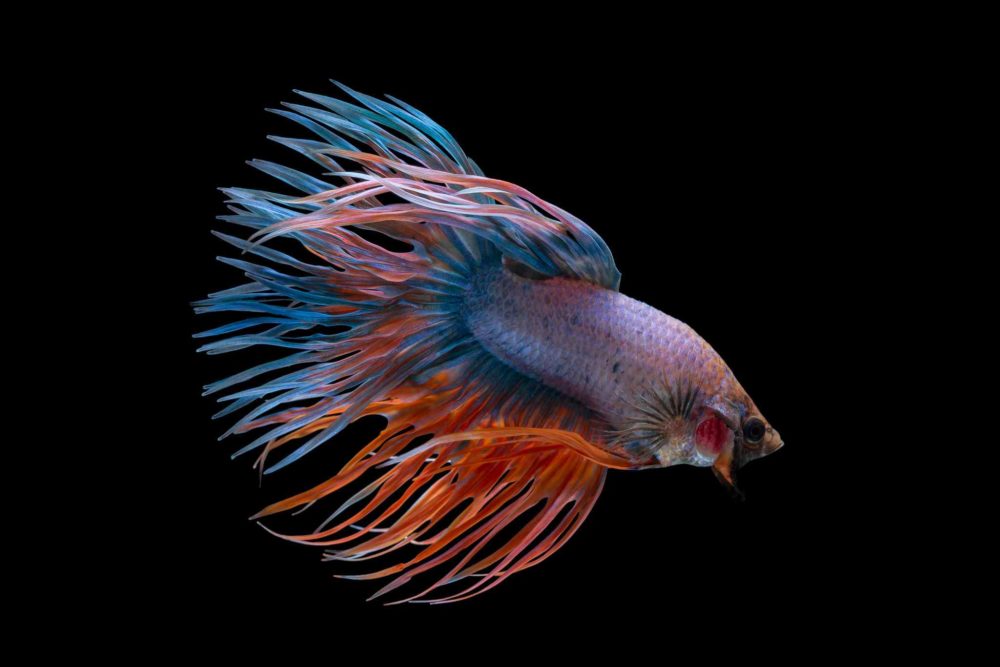 The Betta fishes are also known as Siamese fighting fish. They are very popular fishes in the aquarium trades. They are known to be highly territorial. Males are observed to be more aggressive in nature than females. Sometimes these fishes even kill each other if they are kept in a very small tank. These creatures are very distinct as they are very dangerous yet they seem to be so quiet from their beautiful appearance. The fishes have very amazing caudal fins’ patterns and colours. They have a large variety of species having gorgeous tails like veil tail bettas, red tail bettas, half-moon tail bettas, rose tail bettas, delta tail bettas and super delta tail bettas, spade tail bettas, etc. Unfortunately, the number of these fishes are decreasing and are listed Vulnerable by the IUCN. Read on to find out more about this aggressive yet beautiful types of Betta Fish.

The crown tail betta fishes are very popular in the United States for their beautiful caudal fins. They are a very aggressive type of fishes. They come from family Gourami and the minimum tank size has to be 5 gallons. The average lifespan is of 2 to 3 years. They are carnivores fishes. They are known to be native to Thailand. They are usually found in red and blue colour. These fishes grow maximum to 3 inches. The tank’s light level condition must be dim. In addition to providing your fish more natural type habitat is floating plants, gravel or fine sand.

Also Read: Top 10 Most Beautiful Fishes in the World One of the beautiful types of betta fish, the Veil tail betta fish is the most common type of betta fish. They can easily be spotted as they have a long, flowing, and downwards swooping tail. Their tails arch up, then swoop down again as the fish floats or swim appearing to look like a veil. This is the reason how they got their name – ‘Veil Tail’. The Veil Tail bettas can be found in any local shops. 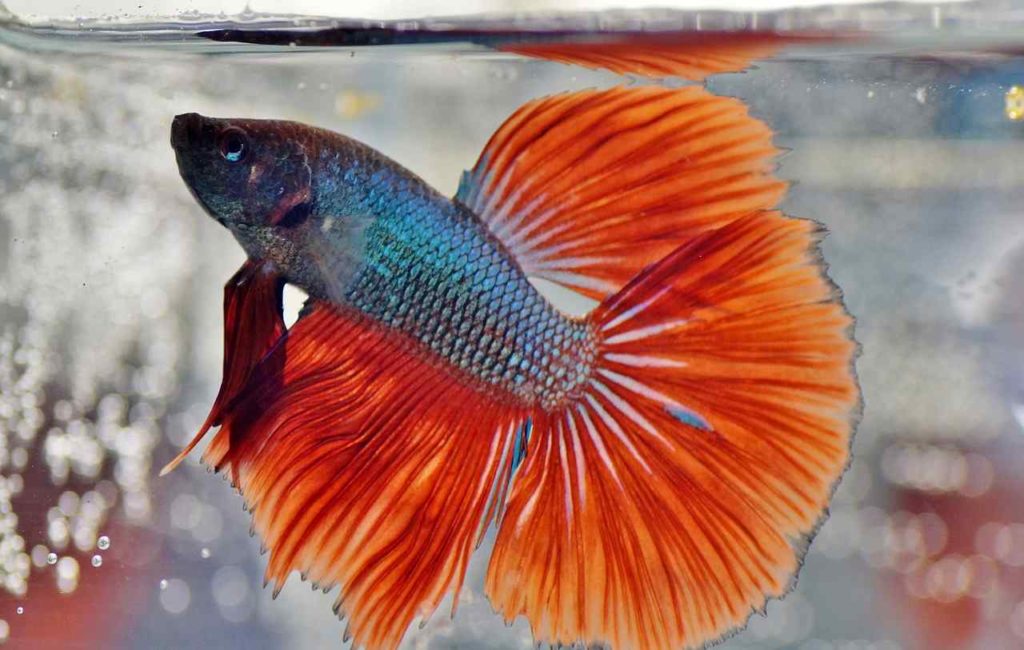 The plakat bettas are a very short finned variety of fishes. Plakats have large strong bodies, large jaws and small fins. Unlike the long fins fishes, the plakats have short fins so that they can move quickly during the fights and suffer less damage. Plakats aren’t easily found in local aquarium stores. You can get it on Aquabid.com or directly from any Thai local store. They are also very aggressive type fishes. They are also known to be more resistant to diseases which makes them favourable to the Betta owners. It is one of the beautiful types of betta fish in the world. 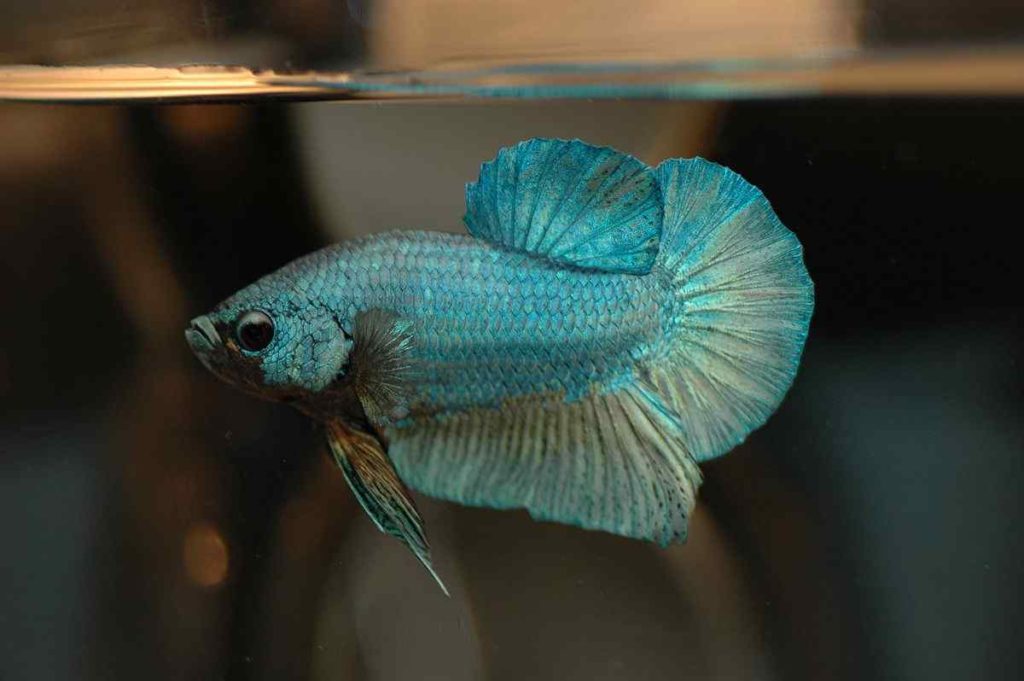 The Half moon betta freshwater fishes are known for their beautiful fins and colour. Betta fishes can breathe from their labyrinth organs which allows them to breathe from their surface. The minimum tank size must be a 1/4th gallon. The maximum water temperature must be 82 °F. These are native to Cambodia, Thailand. 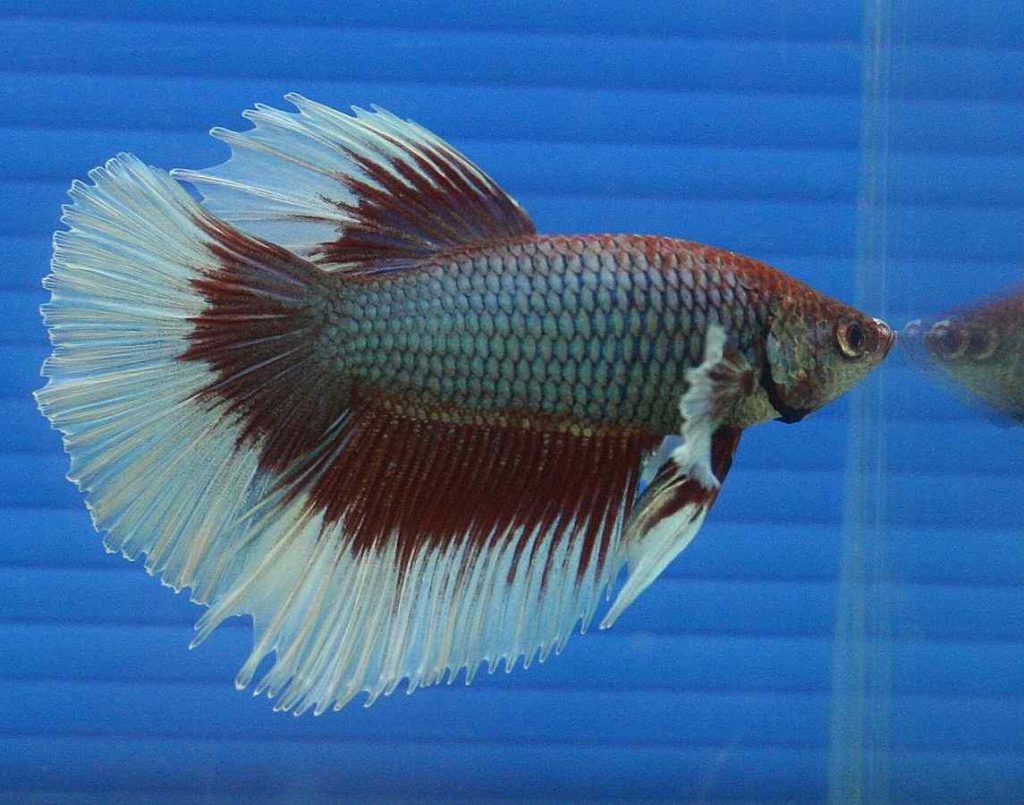 One of the beautiful types of betta fish, the Comb tail betta fish are similar to the crown tail fishes. The tail’s rays are longer than the webbing. However, the comb tail fishes use this feature more subtly. The difference between the fin’s rays and webbing is not so large. Their fans aren’t as spiky as the crown tail’s but have a pointed appearance. The Comb tail fishes are also known as the Half-Sun fishes. This fish is the combination of Crown tail and Half-moon fish. This results in a large tail and 180° sight. 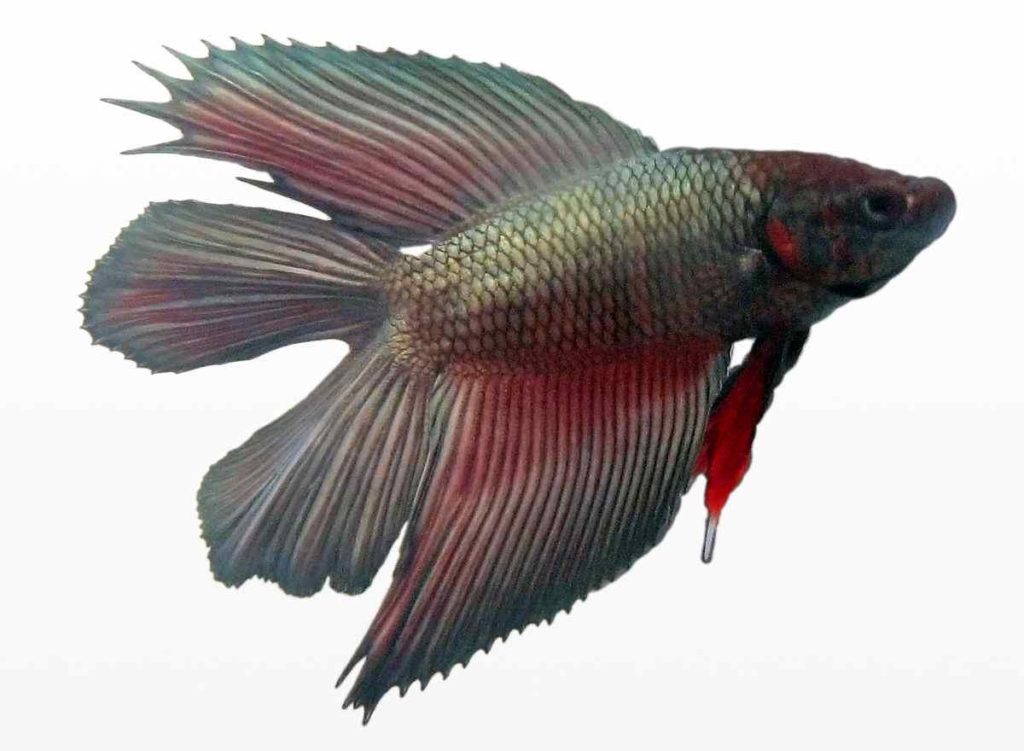 These are peaceful fishes. The minimum tank size must be a 1/4th gallon. The water condition should be 75-86 °F. They belong to Belontiidae family. Double tail betta fish tend to have large dorsal fins. It possesses two distinct tails which are separated at the base. The caudal fins are equally divided at the base. While flaring, their tails almost make a full circle. They have shorter bodies than other tail types. This leaves them to more Swim Bladder problems. The Double Tail Bettas are mixed colour fishes which differentiate them from other betta fishes. The Double Tail fishes are a carnivore and their diet should consist of quality flake food, pelleted Betta diet, frozen or freeze-dried bloodworms and brine shrimp. 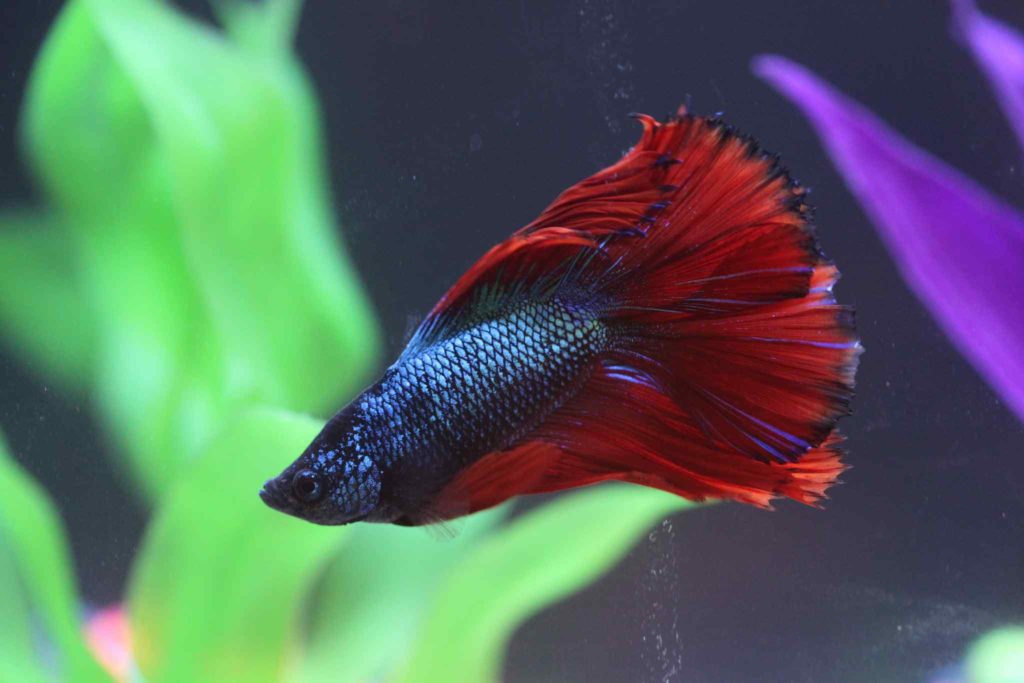 Rose tail betta is a beautiful version of Half-moon betta fish. The difference between the two is the excessive branching on the rays of the fins which causes overlapping giving a rose like aesthetic. Their lifespan is of 4 years. The caudal fins are spread over 180° angle which causes the fins to overlap. It is one of the beautiful types of betta fish in the world. 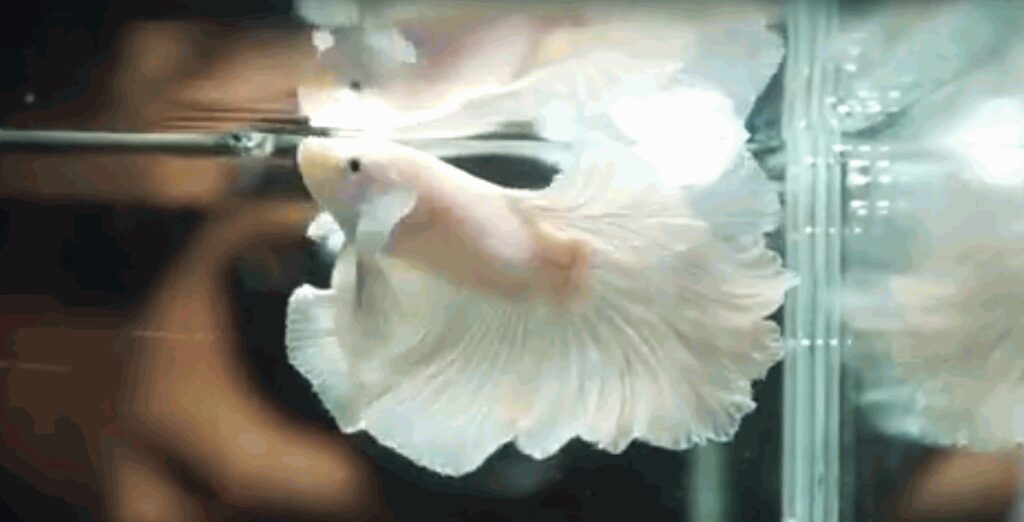 It is strictly not a ‘tail’ type fish. They have extra large pectoral fins which result in these fins looking like elephant ears, hence the name. This distinct fin aids these fishes during swimming expeditions. Like all the other betta fishes, the Elephant/Dumbo ear bettas are also found in many different colours. They grow up to lengths of about 6.5 cm when mature. They have slim profiles against flowing fins that sometimes appear bigger than their actual body. These fishes are native to Asian waters of Vietnam. The tank size requirement is of 20 gallons. Water temperatures should also be 75-82 °F. 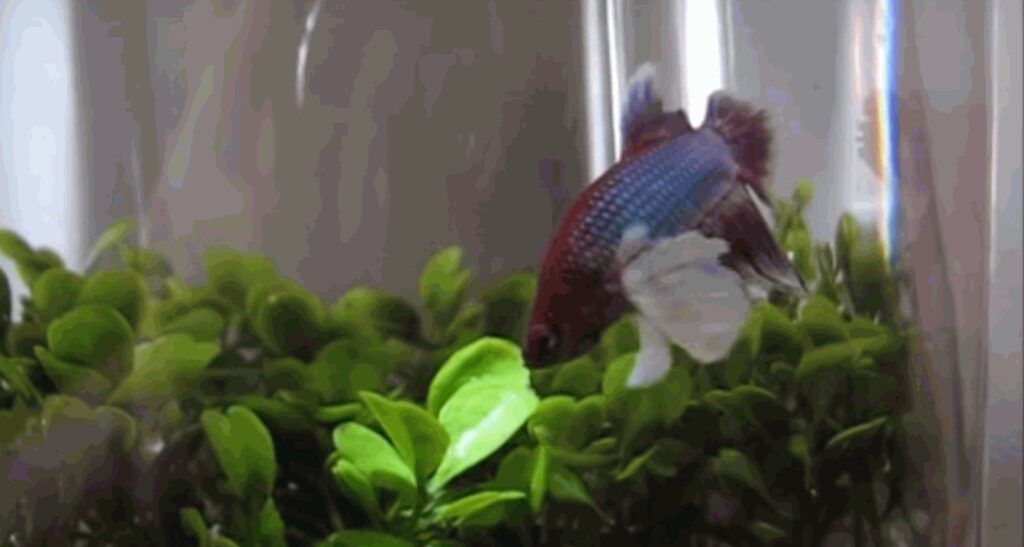 A delta tail betta fish has a narrow body and towards the end of it, the fins get wide open. The body widens towards the tip which gives it a triangular shape. The Delta tail is the right name for any non – half-moon betta. Anon – Halfmoon is when the tail has straight caudal edges just like a Halfmoon, but they don’t reach 180 degrees.

As you can guess the appearance of the fish from the name itself, they have spade-like caudal fins. They have very clear spade-like shaped caudal fins. The tail has a wide base which then narrows to a point smoothly. The Spade tail bettas not very common and you will rarely find them. It is one of the beautiful types of betta fish in the world. 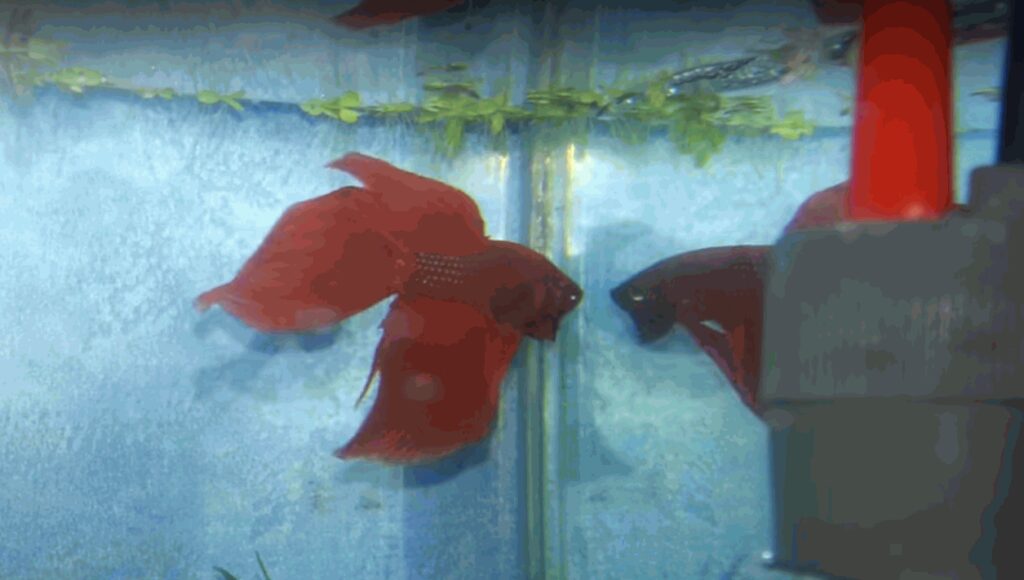 These are the 10 beautiful types of betta fish in the world. Do post your comments.