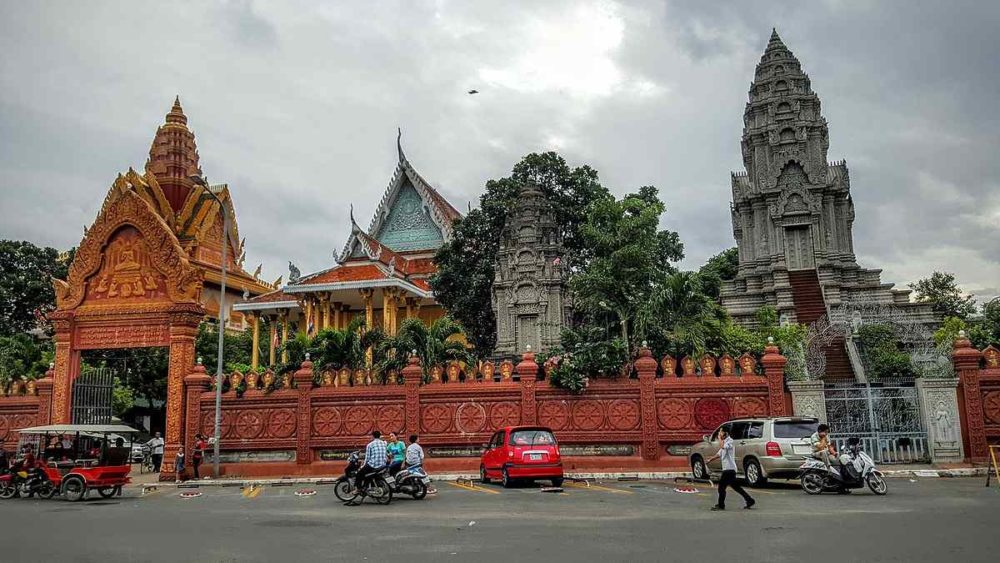 Phnom Penh, the capital city of Cambodia is a vibrant, bustling and a worth visiting place. Situated at the confluence of three rivers, the Mekong, the Bassac and the Tonle Sap, the city was once considered as the ‘Gem’ of Indochina and a historical, and cultural hub with fantastic french built structures. It is also one of the biggest and wealthiest cities in Asia. There are so many tourist attractions in Phnom Penh that will leave the visitors spellbound.

The enchanting beauty of the city retains its former charm as a leafy South East Asian capital with fantastic riverside trails, walkable riverfront, lined with parks, restaurants and bars and much more. One can explore the beautiful attractions ranging from the ornate Royal Palace, Silver Pagoda to the National Museum, displaying elegant artefacts from around the country.Here are the 10 tourist attractions in Phnom Penh,

Royal Palace, a Royal residence in Phnom Penh, is one of the most splendid architectural achievements in Phnom Phen. The palace was built in 1866 by the Majesty of Preah Bat Norodom, a royal king of Cambodia. This beautiful place with its classic Khmer roofs and ornate gilding dominates the diminutive skyline of Phnom Penh. The tower roof is marvellously decorated with golden coloured tiles. The palace also boasts many beautiful buildings including, Throne Hall which is situated to the left of the main entrance, a 59-meter long tower, Silver Pagoda and much more.

Night Market in Phnom Penh is located adjacent to Mekong riverfront and offers a wide and varied range of Cambodian handicrafts silks, art, and also provides cheap food and cheap products including T-shirts, jeans, shoes, and dresses and much more. The venue also encompasses tasty dishes for foodies. One can find here an array of food stalls ranging from spring rolls to Cambodian sausages, grilled meats and more which attracts not only the local people but also many foreign visitors.

Designed by Cambodia’s best-known architect, Vann Molyvann, this is an important Phnom Penh building which is also knowns as the National Sports Complex. The Olympic Stadium is one of New Khmer architectures and includes a sports arena and facilities for boxing, gymnastics, volleyball and other sports events. It is a multi-purpose stadium in Phnom Penh, Cambodia that has a capacity of 70,000 people. Despite its name, the Olympic stadium has never hosted an Olympic Games as it was built to host the 1963 Southeast Asian Peninsular Games, but the games were cancelled due to political problems in Cambodia. It is one of the tourist attractions in Phnom Penh.

Sisowath Quay is a fantastic three-kilometre long boulevard, located along the intersection of the Mekong and Tonle Sap rivers. This is the most bustling area in the city, with a wide variety of boutiques, bars, cafes, restaurants and luxury hotels. In fact, this is a shoppers’ haven and tops the list of shoppers’ favourites location. Nevertheless, Sisowath Quay has a cool, relaxing atmosphere that allows both Cambodians and tourists to enjoy in a delightful manner. The venue enjoys a most strategic location, is located at the meeting point of almost all roads that lead to the key highlights of the city.

One of the tourist attractions in Phnom Penh, Wat Ounalom is the phnom phone’s most conspicuous temple and probably the most attractive place in the city. It was established in 1443 and consists of 44 structures. The temple was damaged during the Khmer Rouge period but was later restored. It is an historic place that houses a stupa that contains an eyebrow hair of Buddha and an inscription in Pali. The temple was built in 1443 to enshrine this eyebrow hair (ounalom) of Lord Buddha, and also houses an interesting collection of magnificent paintings and cultural relics that throw light on the life of the Lord Buddha.

The National Museum of Cambodia is the largest archaeological and cultural history museum located in the heart of Phnom Phen, Cambodia. The museum houses one of the world’s largest collections of over 14,000 items, from prehistoric times to the periods of Khmer Empire including Khmer art, sculptural, Khmer ceramics, bronzes, and ethnographic objects and much more. Also, one of the most spectacular exhibits of the museum is the eight-armed statue of Lord Vishnu that dates back to the 6th century. Another remarkable attraction is the image of King Jayavarman VII in a meditation posture that can be seen in the West Gallery displaying artworks from Angkor Wat.

Psar Thmei, literally ‘New Market’ is often called the Central Market, is a large market located in Phnom Phen. It is constructed in the shape of a dome with four arms branching out into vast hallways that encompasses countless stalls of items selling at a very low price. One can also find much secondhand stuff in the market. For some time, it was the biggest market in Asia. Central Market is undoubtedly one of the best markets of Phnom Phen for browsing. In fact, it is the cleanest and has the widest range of products for sale on the entire city.

The Independence Monument in Phnom Penh was built in 1958 to memorialize and to commemorate the independence of Cambodia. This fantastic monument is one of the most striking landmarks of Phnom Penh that stands on the intersection of Norodom Boulevard and Sihanouk Boulevard in the centre of the city. The monument is built in the form of a lotus-shaped stupa, and some style taken from other Khmer historical sites. It is one of the tourist attractions in Phnom Penh.

Russian Market is one of the most popular markets among tourists and the best place in the city. This fantastic place encompasses everything from beautifully hand carved statues, colourful lanterns and handmade silk scarves to fake bags, printed T-shirts and much more. It is called the Russian market because it was a popular market among the Russian expats during the 1980s when most of the western expats in Phnom Penh were Russian.

One of the tourist attractions in Phnom Penh set on a grassy hilltop of a 27 metres high tree, Wat Phnom is on the only hill temple in the town. Centrally located in the heart of Phenom Phen, it is a historical Buddhist temple (wat. It was built in 1372 and is the tallest religious structure in the city. Also, the interior of the temple has a central altar complex with a large bronze seated Buddha surrounded by other statues, flowers, candles and other items of devotion and worship.

These are the 10 tourist attractions in Phnom Penh. Do post your comments.