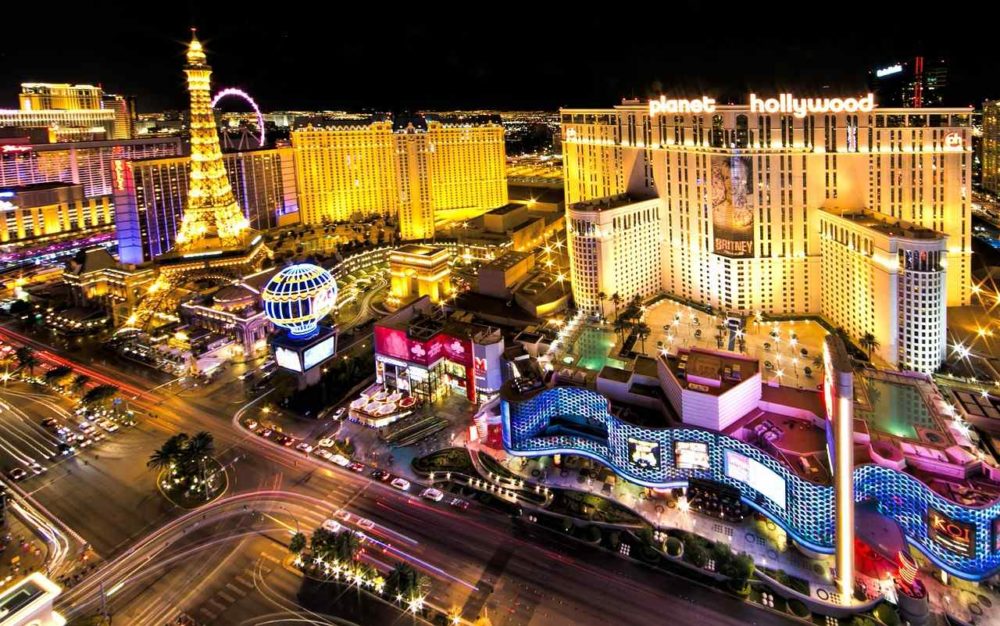 Las Vegas is a resort city located in the U.S state of Nevada. Las Vegas was sometimes known as the “Sin City” because of its mob history and gambling. However, Las Vegas is a great place to visit as it is popularly known for its vibrant nightlife, 24-hours casinos and other entertainment activities. The cooler winter temperatures and pleasant weather in summer attract tourists from various parts of the world. Here are the 10 tourist attractions in Las Vegas,

Luxor Las Vegas is a deluxe five-diamond hotel and casino situated on the southern part of the Las Vegas Strip. Known for its iconic pyramid shape, Luxor features a casino and live entertainment. Luxor encompasses an area of about 120,000-square-foot. It has a casino with over 2,000 slot machines and 87 table games. The hotel is named after the city of Luxor in Egypt. It is the sixth-largest hotel in Las Vegas and the ninth-largest in the world. The hotel has 30 storyes with modernized design and contains a total of 4,407 rooms including 442 suites.

The Fremont Street Experience is a pedestrian mall and tourist attraction located in Downtown Las Vegas. Fremont Street Experience is an incredible entertainment and gaming destination in the heart of the world’s most exciting city. Also, this world-famed venue is home to Viva Vision, the largest LED screen in the world. Other major attractions include SlotZilla Zip Line, The Parking Plaza, Neonopolis complex and many more.

One of the tourist attractions in Las Vegas, The Las Vegas Strip is a stretch of South Las Vegas Boulevard that is known for its concentration of resort hotels and casinos. The Strip is about 6.8 kilometres long and many of the largest hotel, casino, and resort properties in the world are located on the Las Vegas Strip. Its contemporary architecture, lights and a wide variety of attractions make it a beautiful scene. It is also one of the most popular and iconic tourist destinations in the United States and the world. Most parts of the Strip has also been considered as a scenic route at night.

Stratosphere Tower is a 1,149 feet tower located in Las Vegas. It is the tallest freestanding structure in the United States, and the second-tallest in the Western Hemisphere, only next to the CN Tower in Toronto, Ontario. It encompasses top-class facilities such as casino, mall, hotel, the restaurant at the top of the tower named as the ‘Top of the World’ restaurant for an unforgettable experience.

Madame Tussaud’s in Las Vegas is a wax museum located at the Venetian Las Vegas casino resort in U.S state of Nevada. The museum was opened in 1999 and became the first Madame Tussaud’s venue to open in the United States. It was originally founded as a travelling show in France in 1794. It encompasses more than 100 wax figures of world-famous celebrities, film and TV characters, athletes, musicians and superheroes, as well as 4D movie theatre.

The Shark Reef Aquarium at Mandalay Bay is a public aquarium located in Mandalay Bay Resort and Casino in Las Vegas. It covers an area of about 95,000 square feet and displays numerous different species of sharks, fish, reptiles, and marine invertebrates. Shark Reef aquarium is the home of over 2,000 animals including the sawfish, giant rays, endangered green sea turtles, piranha, jellyfish and the rare golden crocodile. Also, this interactive place offers a glimpse of the Earth’s polar regions to the visitors.7. High Roller Ferris Wheel.

High Roller is a 520-feet diameter giant Ferris wheel Located at the heart of the Las Vegas Strip in Paradise, Nevada, United States of America. From the ground to the top of the tallest cabin, The High Roller stands out at 550 feet, making it the world’s tallest Ferris wheel. At night the wheel is illuminated by 2,000 LED system of different solid colours moving around the rim making it a great attraction for visitors on special events as well as on holidays. It is one of the tourist attractions in Las Vegas.

Paris Hotel Eiffel Tower in Las Vegas is a premier hotel and casino located on the Las Vegas Strip in Paradise, Nevada. It is 540-foot tall and a replica of the Eiffel Tower. It offers top-class facilities to visitors such as restaurants, bars, shops, casino and much more. The recently opened Hexx Kitchen & Bar and Hexx Chocolate & Confessions is the first “bean-to-bar” chocolate maker in Nevada. Also, Beer Park opened on a 10,000 square-foot deck overlooking the Las Vegas Strip the is Las Vegas’ first rooftop bar and grill.

One of the tourist attractions in Las Vegas, Gondola ride in Las Vegas through the “canals” at the Venetian Hotel and Casino is one of the most attracted places for tourists. The Venetian Hotel on the Las Vegas Strip rejuvenate the visitors of a gondola ride and provides a true experience of being Italy as the Gondola ride is designed as the mimic of Grand Canal of Venice in Italy. However, it offers panoramic views and creates an illuminating scene which is best fit for photography and other joyful experience for visitors.

The performances take place in front of the Bellagio hotel and are visible from various points of the Las Vegas Strip. The show takes place every day in the afternoon and in the evening. Also, just two minutes before a water show starts, the nozzles begin to break the water surface and the lights start illuminating the hotel tower usually with purple or red-white-and-blue colour which is accompanied with certain music.

These are the top 10 tourist attractions in Las Vegas . Do post your comments.