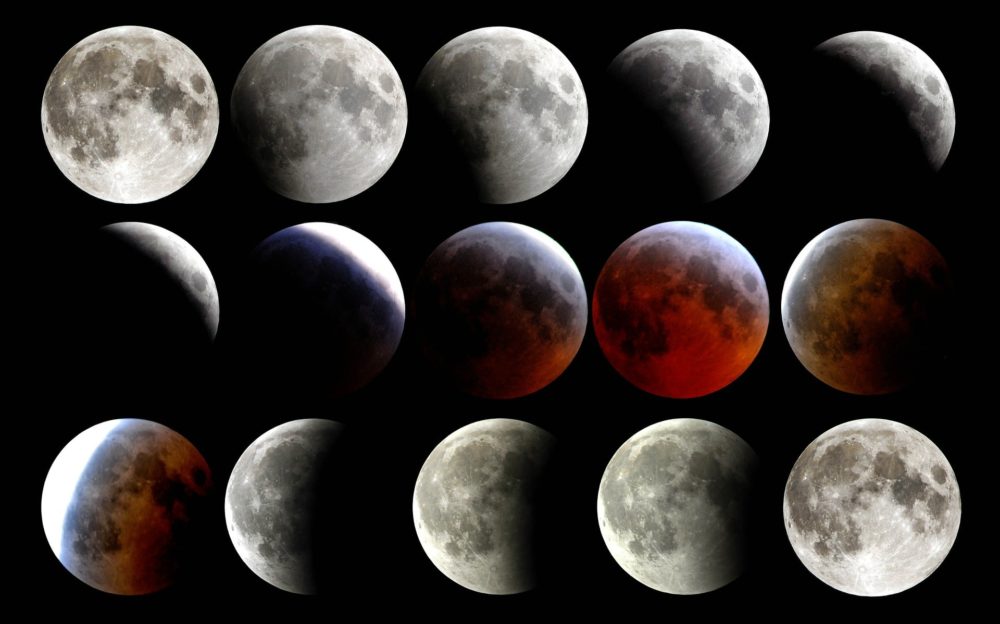 Next week will be quite happening from a space point of view because the longest eclipse of the 21st century happens next week and the Earth will colour the moon blood red. The astronomical event will take place in late July and it will be a longest total lunar eclipse in roughly 100 years.

On 28th July early morning, Earth will pass between Sun and our 4.5 billion old satellite to cast the longest shadow of the 21st century. The shadow colour will range from orange to an eerie blood-red hue that too if you are in the middle of the eclipse. 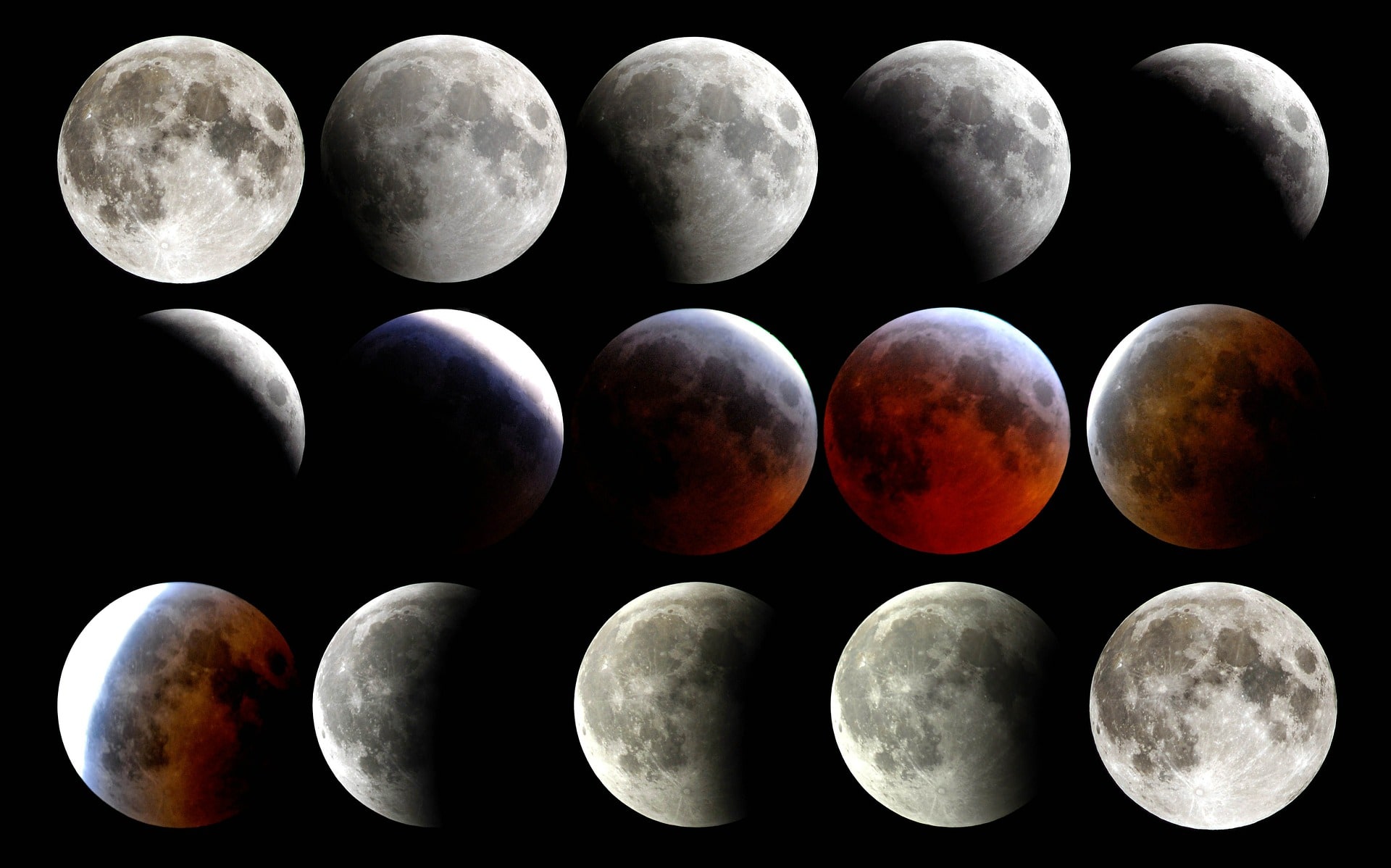 A total lunar eclipse and total solar eclipse are similar, however, tier appearances are significantly different. During a solar eclipse, the moon passes between the sun and the Earth to cast a shadow on our planet, However, the shadow is colourless because Earth has no atmosphere to reflect any light.

Earth has a somewhat different story because our planet is rich in a nitrogen-rich atmosphere and takes while sunlight and scatters around blue colours. This is the primary reason why we see blue skies and sun yellow. However, during sunset and sunrise, the light reaching our eyes have been more thoroughly scattered, so much that blues are nearly absent. This is the reason we see light appear more orange or even red. 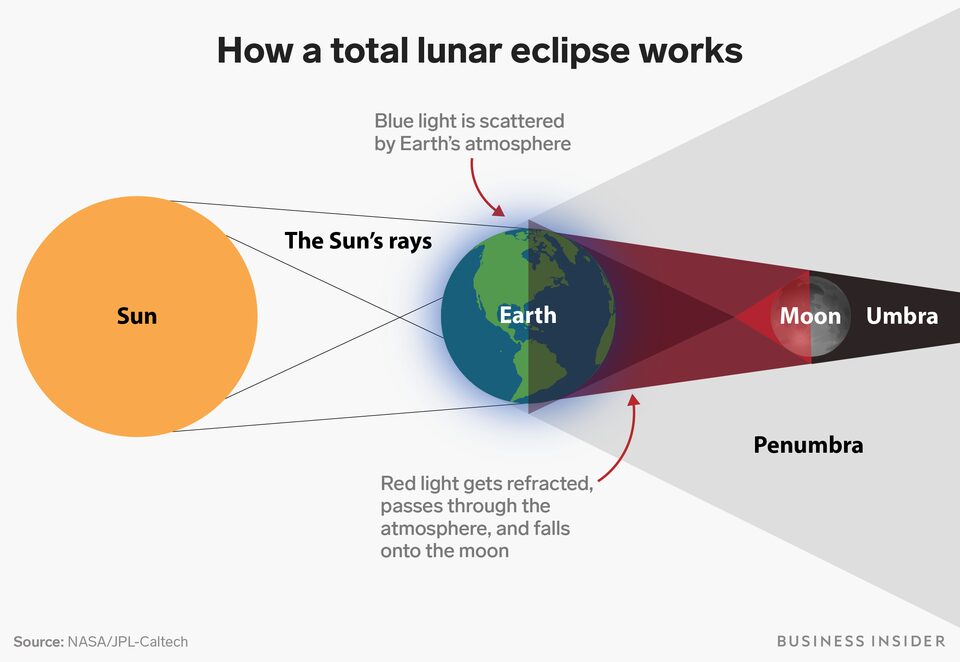 The Earth, Moon, and Sun during a total lunar eclipse. (Shayanne Gal/Business Insider)

“If you were standing on the moon’s surface during a lunar eclipse, you would see the sun setting and rising behind the Earth,” David Diner, a planetary scientist at NASA’s Jet Propulsion Laboratory, wrote in a blog post.

“You’d observe the refracted and scattered solar rays as they pass through the atmosphere surrounding our planet.”

Now, you understand that why lunar eclipses are orange-red: All of that coloured light is focused on the moon in a cone-shaped shadow called the umbra. During this time, the Moon is also covered ultra-fine, glass-like rock dust called regolith, which has a special property called “backscatter“.This bounces a lot of light back the same way it came from, in this case toward Earth.

So, when we’re looking at the moon during a total lunar eclipse, we’re seeing Earth’s refracted sunset-sunrise light being bounced right back at us.

The red colour is never quite the same from one lunar eclipse to the next due to natural and human activities that affect Earth’s atmosphere.

“Pollution and dust in the lower atmosphere tend to subdue the colour of the rising or setting sun, whereas fine smoke particles or tiny aerosols lofted to high altitudes during a major volcanic eruption can deepen the colour to an intense shade of red,” Diner said.

Related: Top 10 Brightest Objects In Space That You Can See With Your Naked Eye

Now, Where and when to see the total lunar eclipse

If weather conditions will be ok, the total lunar eclipse will be visible in eastern Africa, the Middle East, and central Asia. Also, Scientists in Antarctica should also have a great view.

Other regions including Europe, eastern Asia, Australia, Indonesia, and other regions will also enjoy a partial lunar eclipse where the moon passes partly through Earth’s shadow. In the Australian continent, Western Australia will be the only Australian state to catch the entire eclipse.

You can still watch on a live webcast, though, if you’re located elsewhere.