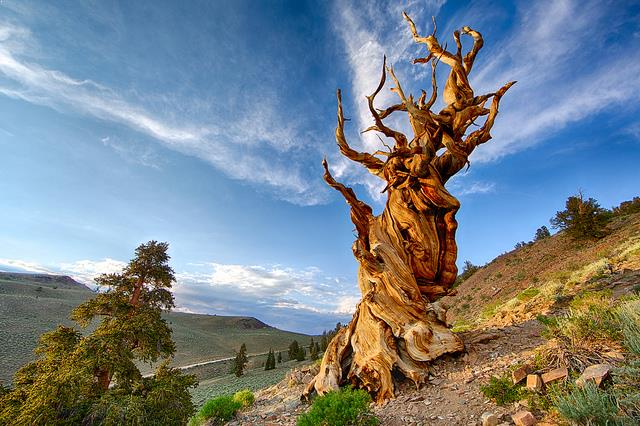 What is Earth without greenery? Even a sapling does the work of hope in the barren piece of land. Forest is the guardian of our Earth. The ways in which trees help us is no doubt a big list. They don’t just provide shelter to the tired traveller but also inspire the artist. They give food and sometimes also a meaning to our life. The rings secure myths and memories within them. Had Sir Isaac Newton not steeped into an orchard in Lincolnshire, England and had an apple not fallen on his head, he would have probably never developed the law of Gravitation. We can clearly say that trees have magically transformed the face of mankind. There are 60,065 species of trees around the world. Here are 10 most famous trees in the world, each having a unique tale to tell. Have a read.

FAMOUS TREES IN THE WORLD

Methuselah of the species Great Basin Bristlecone Pine is 4,848 years old. It glorifies the White Mountains of California in the Inyo National Forest’s ‘Forest of Ancients’. One of the oldest trees in the world until 2013 when another ancient Bristlecone Pine of 5,000 years old of Methuselah is the oldest tree in the world. The rings of the trees look perfectly majestic. Today, both the famous trees are under high protecting along and their precise location has been kept as a secret to protect them. Tourists can visit the Methuselah Grove from mid-May till the end of November.

Related: Top 12 Fastest Growing Plants And Trees In The World

The Ashbritle village is home to Britain’s oldest living tree. Believed to be planted during 2,000 BC; the Ashbritle Yew is in the Churchyard of St. John the Baptist. The tree has seven trunks; one hollow central trunk and six trunks surrounding it. Yew trees are considered to have a significant place in Christianity. People worship it as a symbol of renewal and resurrection. Even though Yews are poisonous, they also produce an anti-cancer drug. If myths are to be believed, a pre-roman Chief is said to be buried under the mound beneath the 40 feet canopy. Unfortunately, with time the Ashbritle yew has fallen sick. 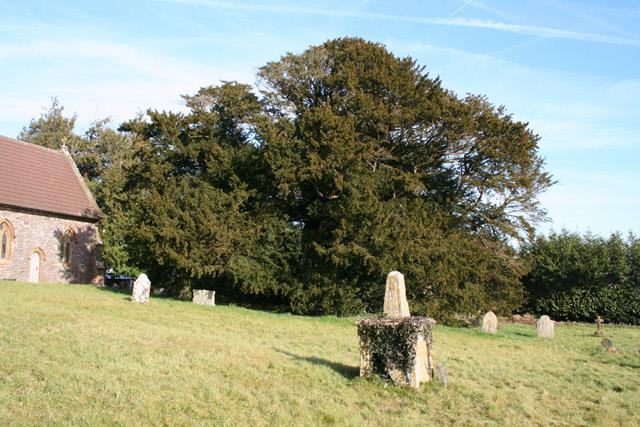 The World’s largest living tree, General Sherman is a gigantic sequoia tree. It is located in the Giant Forest of Sequoia Nation Forest in Tulare Country of California. The General Sherman tree is 275 feet tall and is more than 36 feet in diameter at the base. That’s not all, it keeps on growing. Every year it grows 60 feet more. The tree has been named after William Tecumseh Sherman who was the General in American Civil War. Tourist can visit the Sequoia National Forest to see the magnificent creation. It is also home to the Washington Tree, which was once the second largest tree until burnt by a lightning stroke. 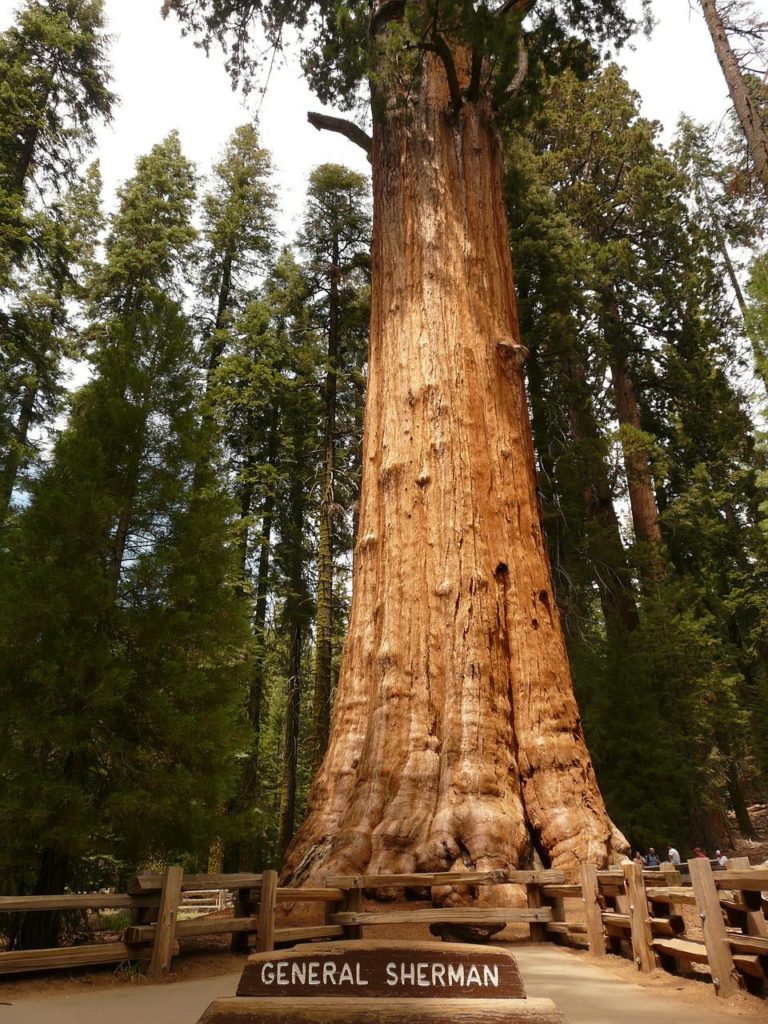 The island of Socotra in the northwest Indian Ocean in Yemen is known for its rich biodiversity. Its flora and fauna are unique. One-third of its trees are endemic to the island. One of the most famous trees among them is the Socotra Dragon Tree. Also known as the Dragon’s blood tree, its name is derived from its resins. If legends are to be believed, the Dragon’s Blood tree grew from the blood of an injured dragon that fought with an elephant. The trees on the Granite Mountains and limestone plateaus have a distinctive appearance. The branches grow in a dichotomous branching pattern, thus creating a base for the crown of the tree. The resins of the tree are used for various purposes like paint, dye, medicines, and cosmetics, among others. The strange looking tree’s branches and leaves give it the shape of an umbrella. It is also listed as one of the oldest trees in the world. 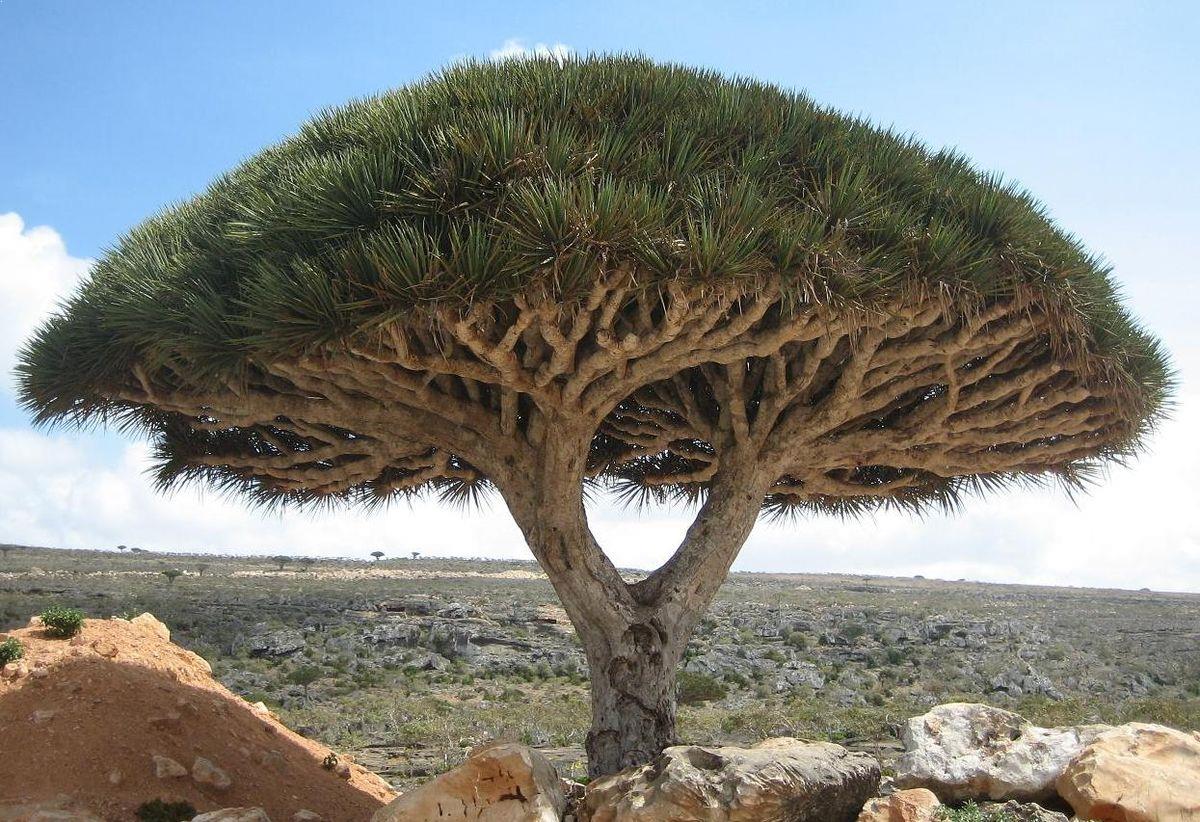 Nottinghamshire Sherwood’s forest is home to Major Oak, a Quercus Robur. According to the legends, the 1000-year-old tree once provided shelter to Robin Hood while he was escaping from his enemies. First, it was known as Cockpen Tree. Today, Major Oak is 52 feet tall, 23 tons and measures a waistline of 35 feet. The enormous size is believed to be the result of germination of several oak trees. Even the trunk is huge; the Oaktree has a hollow interior. This is caused by the fungi but this helps mammals and insects to hibernate inside it. Major Oak is a famous tourist attraction and is visited by countless people throughout the year. 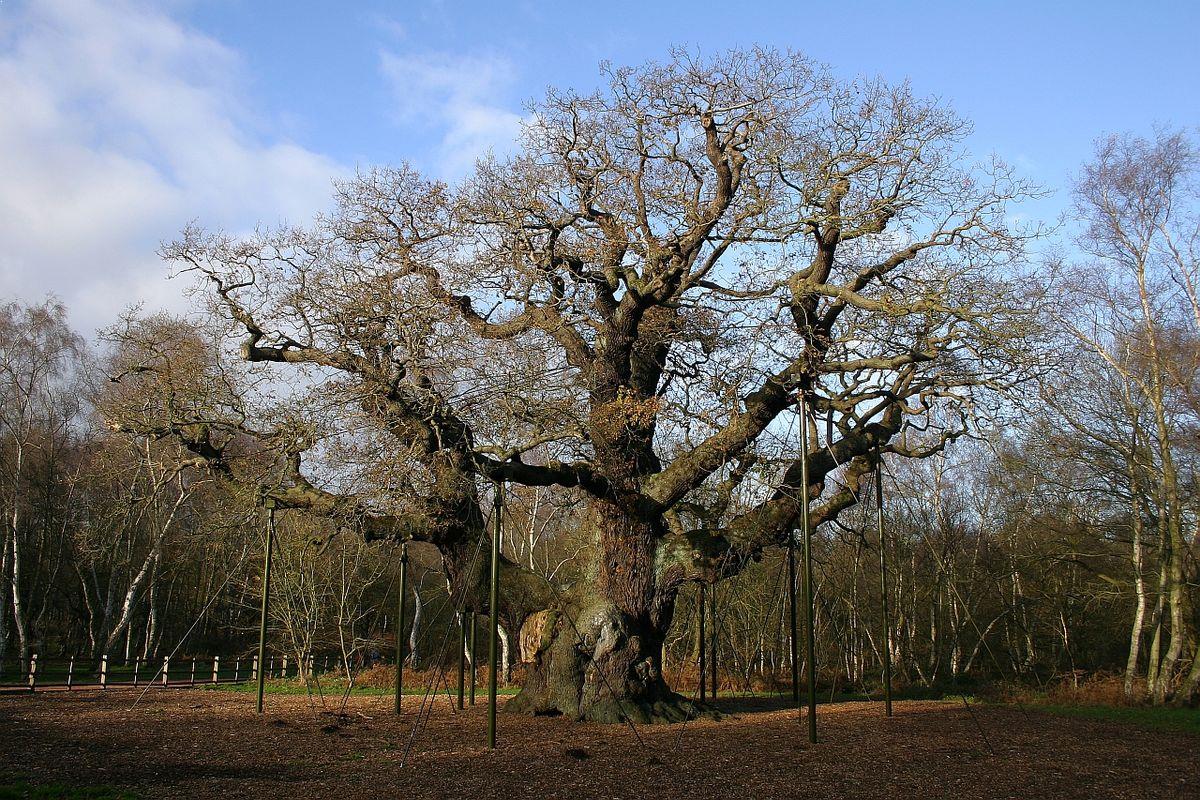 6. THE AVENUE OF THE BAOBABS

Madagascar in Africa was once a dense forest. But the absolute madness of developing civilisation uprooted the entire land, just leaving behind the Baobabs. The Avenue of the Baobabs is a group of ancient Baobabs trees that stand tall on either side of the muddy road between Morondava and Belo Tsiribihina. The trees grow up to 30 metres tall, with a circumference of 50 metres around and diameter of 11 metres. The best time to visit this place is during sunset. It seems as if the roots like canopies are touching the red sky. 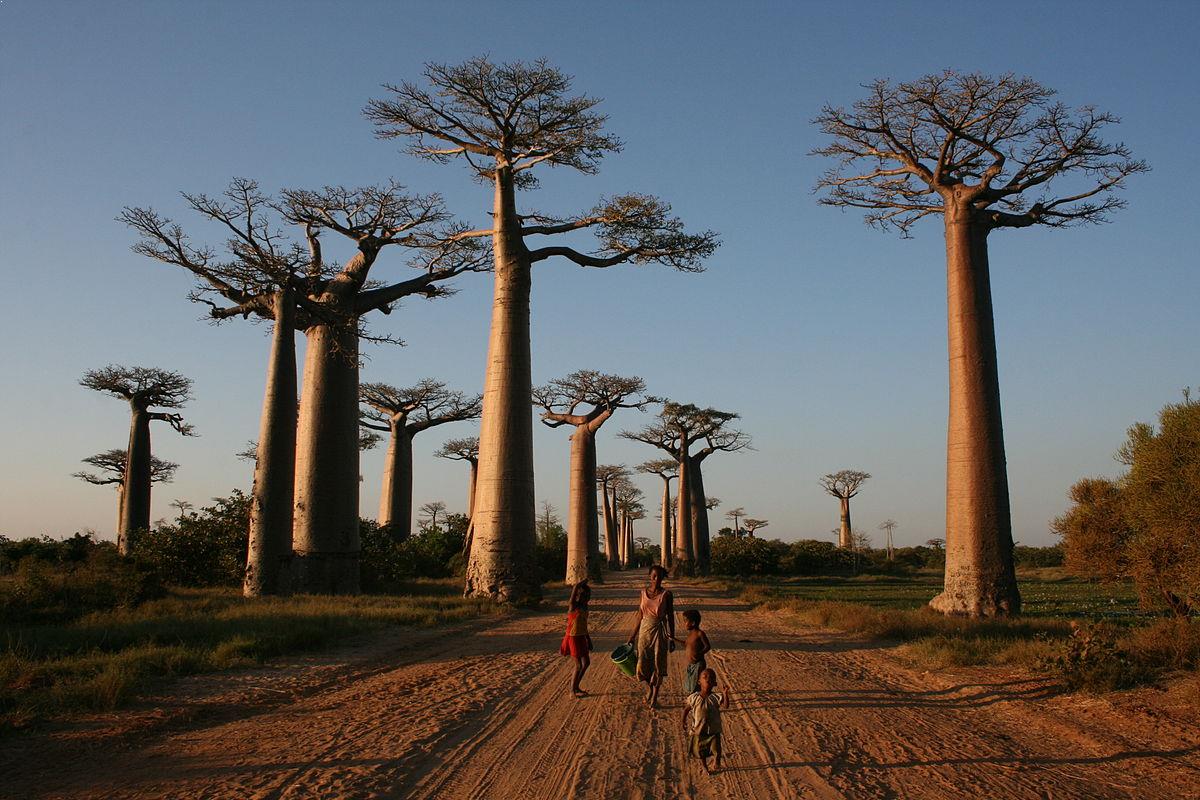 Back in 249 BC, King Tissa planted the Maha Bodhi sapling that was sent by Emperor Asoka through his daughter. The sapling was from the main stem of the holy Bodhi tree in Bodh Gaya. The tree now more than 2265 years old. It is the oldest living tree that was planted by humans. Anuradhapura in Sri Lanka is considered as a pious place for Buddhists and other tourists as the tree from which the sapling of the sacred fig tree was collected were the same tree under which Buddha got enlightenment. 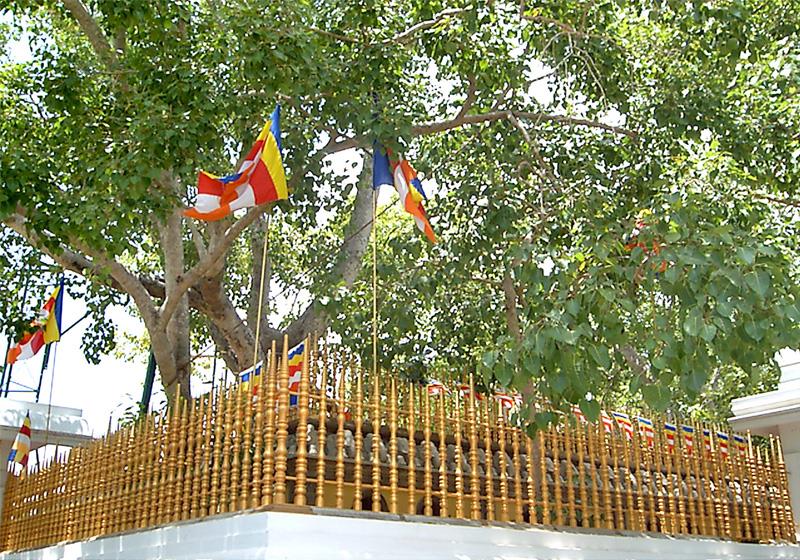 Belonging to the family of Malvaceae, Boab Prison Tree is derby has and has many myths related to it. This tree is 1500 years old and located in a remote area of Australia. The gnarled trunk has a circumference of 14.7 metres and it looks as if it’s growing upside down. The widespread myth is because of the hollow appearance of its trunk, which is natural in case of Boab trees. It is said that once it was used as an aboriginal prison. But there is no evidence to prove this. Today BOAB Prison tree is a popular tourist destination. 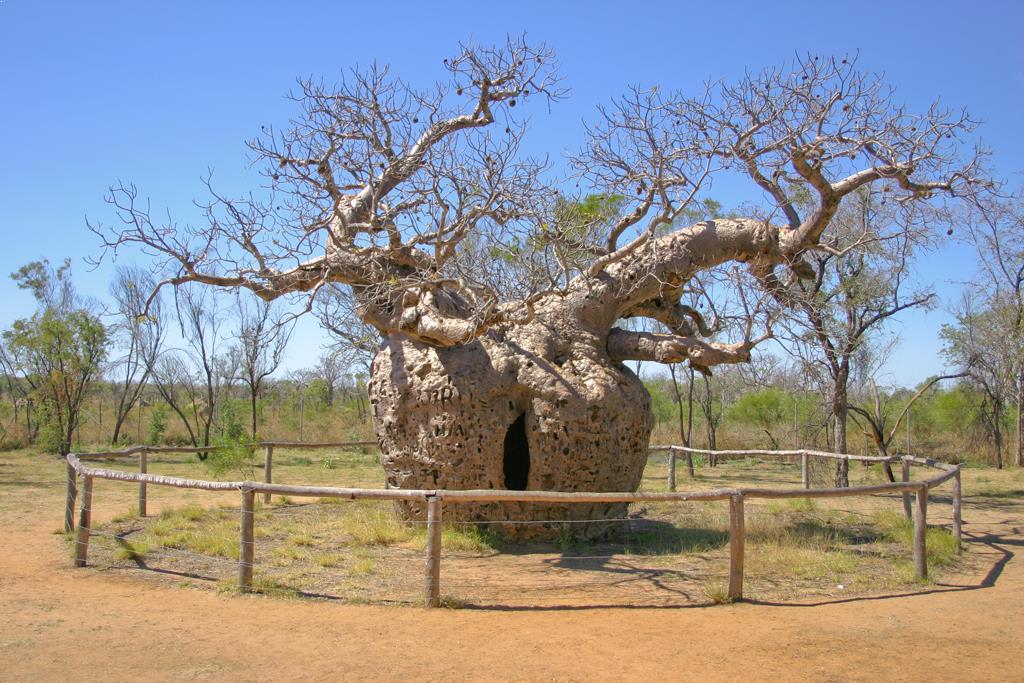 Arbol Del Tule in the Mexican city of Oaxaca is the stoutest tree in the world. It has a circumference of 36.2 metres, although the trunk is buttressed. Even though its height is difficult to measure due to its broad crown, it can be quite clearly said that it is giant. The tree is around 1400-1600 years old. The tree is locally known as the ‘Tree of Life’ due to the impression of animals on its trunk. It is also associated with the religious beliefs. 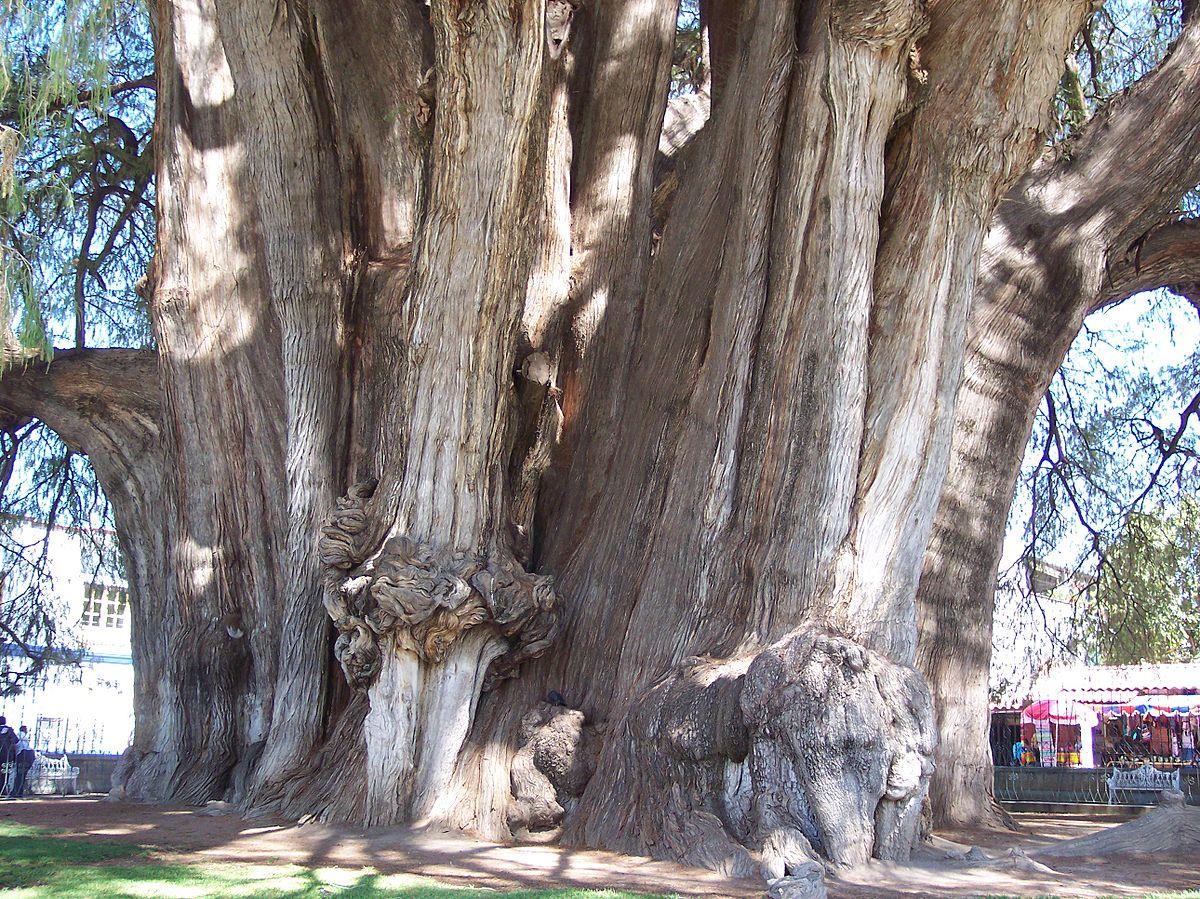 One of the most photographed famous trees, the Lone Cypress stands on the 17-mile drive in Pebble Beach. The 250 years old tree adorns the beauty of the beach. The Monetary Cypress is native to the Fanshell beach and Pescadeo beach in pebble beach and across the Carmel bay at Point Lobos. The lone cypress on the granite rock along with the Pacific Coast truly justifies the beauty. 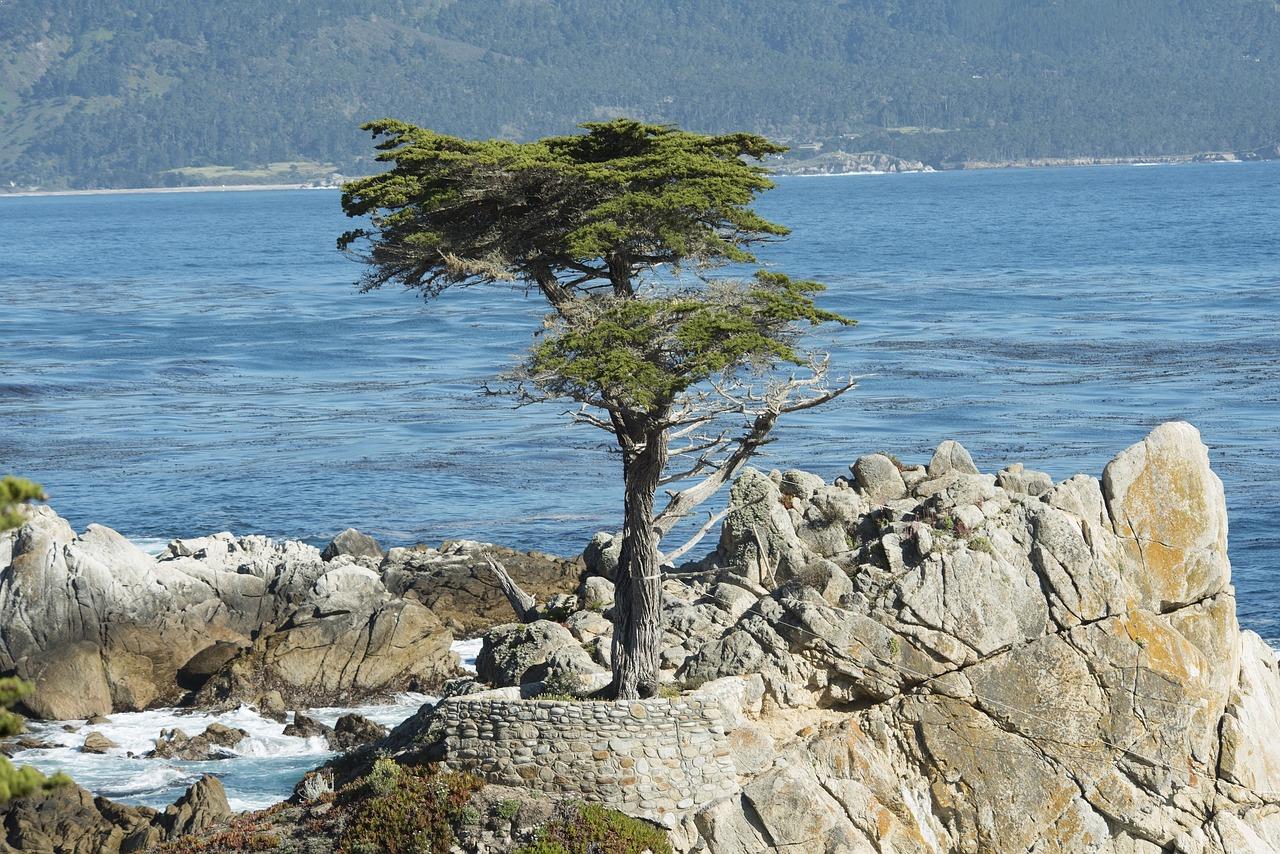 These are the most famous trees in the world. Do post your comments.