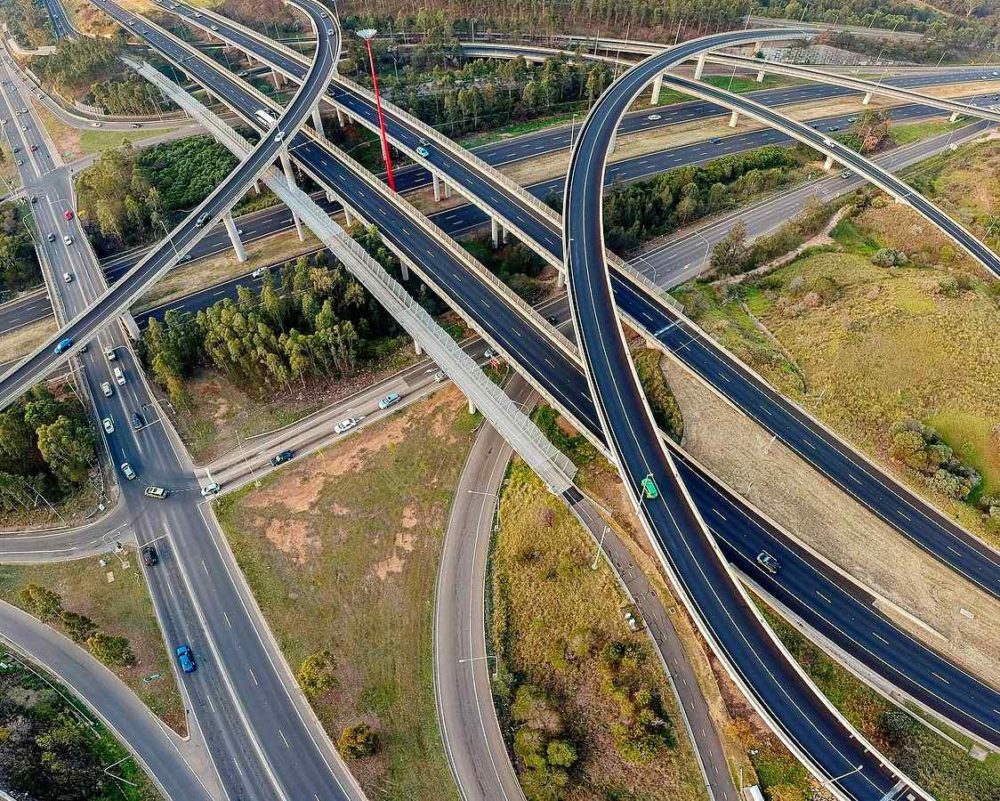 An interchange is a road junction that uses grade separation used mainly to divert the traffic. Interchanges are considered to be marvels of engineering as it requires a deep understanding, accuracy, and planning for its successful construction and working. Here are the mind blowing interchanges in the world,

Gravelly Hill Interchange is the junction 6 of the M6 motorway where it meets the Gravelly Hill area of Birmingham, England. It is colloquially named as Spaghetti Junction throughout U.K. The construction of this interchange started in 1968 and was opened on 24 May 1972. The nickname Spaghetti Junction was coined in 1965 by journalists from the tabloid newspaper Birmingham Evening Mail which is based in Birmingham. There is a total of five levels across which there are 559 concrete columns, having a height of about 24.4m. To accommodate two railway lines, three canals and two rivers, the engineers elevated 21.7km of the motorway. This junction provides access to and from the Tyburn road, Aston Expressway and Lichfield Road/Gravelly Hill Road and other local roads.

This interchange is located in the historic centre of Shanghai – Puxi in China. It is a 6-level interchange connecting Nanbei Road and Yan’an Road. There are no dedicated HOV/bus/truck lanes. It can be considered a unique interchange as mostly the interchanges have less than 6 levels and this is the one with 6 levels. The centrally located interchange has a central pillar known as the Nine-Dragon Pillar. It is a stack type of interchange i.e. it is a free-flowing type of interchange. The roads are constructed in a stack form to allow easy flow of the vehicles thus making transit free from traffic jams.

Tom Moreland, a Spaghetti Junction is a stack interchange. It is a five-level interchange located in Atlanta, Georgia in the United States. It is the intersection of Interstate 85 and Interstate 285 along with several access roads in north DeKalb County, Georgia. It is named from Thomas Moreland – one of the United States’ leading road building experts. The interchange handles currently 3,00,000 vehicles per day. It has 14 bridges, with the highest raising 90 feet running from North Crest Road to I-85 South. I-85 is the major traffic corridor from the north-eastern suburbs to the downtown of Atlanta.

The Judge Harry Pregerson Interchange is a stack interchange in Los Angeles, California. It is located in the Athens and Watts communities of LA. It is about 130 feet high and allows free movement of traffic. The interchange allows Metro Green Line tracks, direct HOV and Metro Express Lanes and the Harbor Transitway all of which contribute to the high imposing structure of this interchange. It is named after the federal judge Harry Pregerson who presided over the lawsuit concerning I-105 freeway’s construction.

Also Read: 10 Most Beautiful Highways In The World

One of the mind blowing interchanges in the world, The massive Xin Zhuang Interchange is located in Shanghai, China. This interchange lies at the intersection of freeways A4, A8, and A20.

The South Bay interchange is a massive interchange located in Boston, Massachusetts, USA. Its construction began in 1997 and ended in 2003. This interchange includes Interstate 90, Mass Pike Extension and Interstate 93. It is one of the mind blowing interchanges in the world.

One of the mind blowing interchanges in the world, The High Five Interchange in Dallas, Texas, USA is a complicated five-stack interchange. Its structure is very complicated due to close proximity and high-occupancy vehicle lanes. It is one of the first five-level stack interchanges built in Dallas, Texas, United States. It is located at the junction of Lyndon B. Johnson Expressway (Interstate 635) and the Central Expressway (US highway 75). This $261 million construction was started in 2002 and completed in December 2005. It is included in the list of ‘World’s 18 Strangest Roadways’ by Popular Mechanics because of its height which is as high as a 12-storey building, it’s 43 permanent bridges and other unusual design and construction features. It is known as a ‘labyrinth of lanes’ and a ‘five-level marvel of engineering’. The highest ramps are 120 feet above the ground.

The Light Horse Interchange is a motorway located in Eastern Creek, New South Wales, Australia. It is located at the junction of M4 Western Motorway and West link M7. Its construction started in 2003 and was opened to the public in 2005. It is the largest in the southern hemisphere. As it is a major feature of Sydney’s road network, it includes unique landscaping and lighting features. A steel tower of 55 meters was installed at the centre of the interchange. The tower is visible to motorists from 2 kilometres away. The interchange’s maximum height is 23 metres.

The interstate 695 is an Interstate Highway in Baltimore County, Maryland in the United States. It is 51.46 miles (84.84 kilometres) in length. It is maintained by Maryland Transportation Authority. It is four lanes wide.

These are the 10 most mind blowing interchanges in the world. Do post your comments.