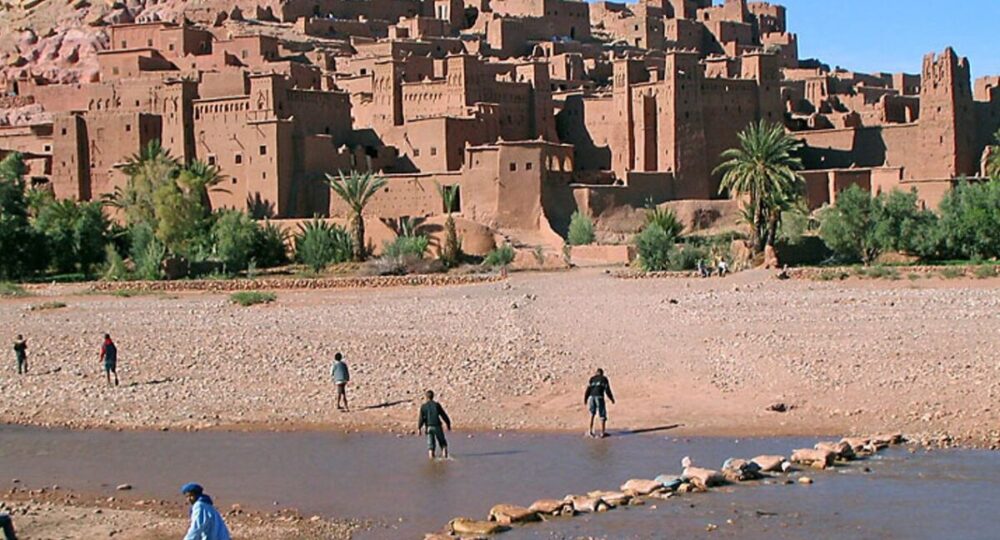 Morocco is a country in the North-West of Africa and is home to various natural, historical and cultural beauties. The geography of the country is very different, from the coastal strips on the Atlantic Ocean and the Mediterranean Sea to the high peaks of the snow-capped mountains of the Atlas to the great expanses of the Sahara Desert. In short, a country rich in everything, and we could not fail to visit it!

On our trip to this great country, we relied on a local tour operator named “Marrakech Expedition 4×4”, it’s managed by a team of guide professionals who made us feel at ease, from the first time we contacted them, by accommodating all our needs, desires and curiosities. You can find out more here.

There are many curiosities about Morocco, so many that it would be impossible to tell them all, but I will start by telling some of them.

Our Morocco tour began in Casablanca, Alì has been our point of reference since the beginning of our travel arrangements, and as soon as we landed at the airport, we immediately found our first friendly face. The entire trip was organised step by step aboard a Toyota 4×4, convenient for excursions in the desert and owned by the agency that also provided the driver.

The journey with a driver was a constant reassurance from stage to the stage that allowed us to get in touch with the Moroccan people and discover places or situations not known to all tourists. 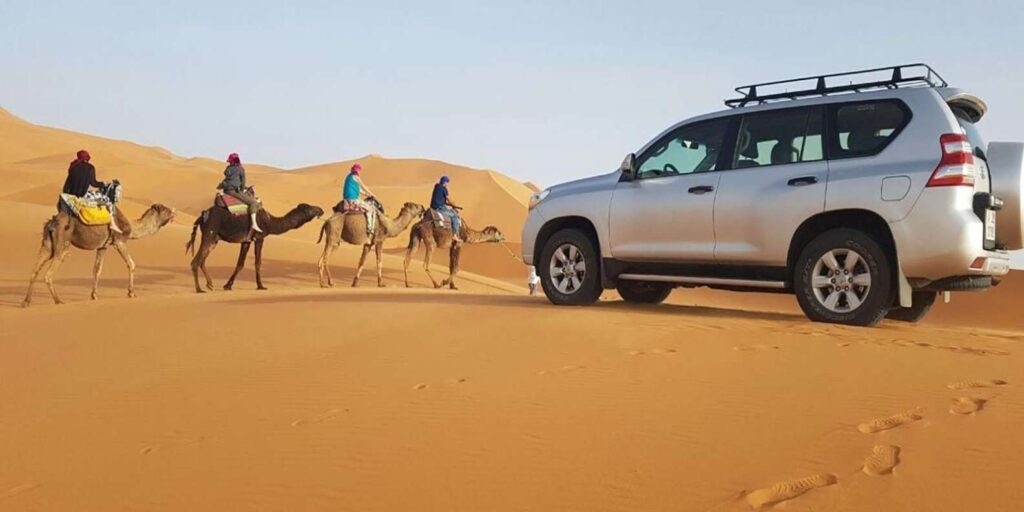 From Casablanca we then moved to Rabat, the Capital of Morocco, one of the 9 UNESCO World Heritage sites in Morocco and one of the four Imperial Cities along with Marrakech, Fez and Meknes.

In our third stage, we had already realised the variety that this country offered. From city to city, the surrounding environment changed considerably. Casablanca is a big city full of places of worship, instead, Rabat is more modern almost comparable to a European city, than arrived to Chefchaouen we found a quieter city but the medina (old part of North African city) was completely blue! Called the Blue Pearl of Morocco, it’s a picturesque and relaxed city where all the houses are painted blue. There are several legends related to this colour, some say that it was painted by the Jews in the 1930s to represent the Sky and the Sea created by God, and some say that the colour is used to keep the interior of the houses cool and away from mosquitoes and termites, others say it is a tribute to the Ras el-Maa waterfall or a way to call the attention of merchants.

From Chefchaouen we moved then to Fes, the oldest of the Imperial Cities of Morocco, with immense white houses and tangled alleys of the medina that make you get in touch with the daily life of the Berbers: from those who sell spices and flour, to those who work iron or hand-woven fabrics, to those who sell street food… 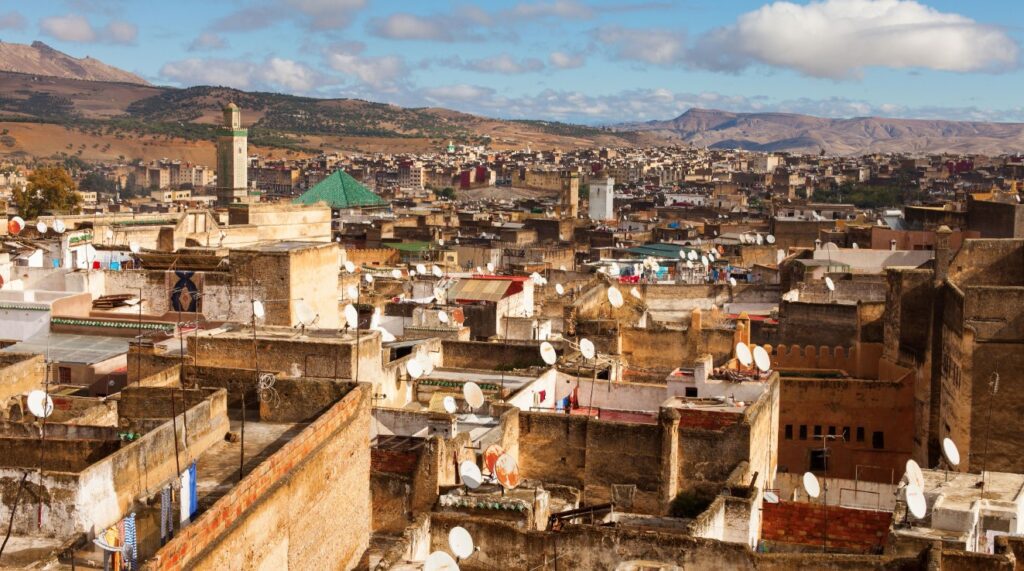 Our Morocco tour then turned towards the South, passing through the mountains of the Middle Atlas and observing along the way the cedar forests and Barbary Macaque in their natural habitat. We then passed from the volcanic rocks in which the Ziz gorges are carved, to the plateau of the Middle Atlas and then we arrived in the Desert, where we had the pleasure to travel by a camel to reach a Berber Camp in the middle of the sand dunes of the Erg Chebbi (the highest dunes in North Africa).

The Morocco desert tour was nothing short of marvellous. We stayed overnight in Berber tents, equipped with mattresses, blankets and pillows. At night we gathered around a campfire and accompanied by the sound of traditional Berber drums, we enjoyed a sky full of stars.

Our next stay organised by this local tour operator took us to Marrakech, also called the Red City. With a local guide and his valuable advice, we visited the landmarks of the city: Marrakech’s Souk (known as the most exotic marketplace to shop in the world), the Madrasa (the largest Islamic college in Morocco with pools, gardens, fountains and surfaces covered in zellij (mosaic tilework)), the Jemaa el-Fnaa (a UNESCO Heritage Site and a unique concentration of popular Moroccan cultural traditions where you can admire snake-charmers, Berber musician, henna tattooing, traditional medicine, preaching, Gnaoua dancers, fruit and traditional food, dental care…) and many many more things!

From Marrakech, we then moved on to the city of Essaouira. In this area, you can see a fantastic image: goats climbing the Argania Spinosa trees! The food shortages in this area lead the goats to acquire the dexterity to climb the highest branches of trees in search of the most tender leaves. The Argan tree grows mainly in this area of the world, in fact, the oil that is extracted is one of the rarest and it’s used both in the kitchen for food products and for cosmetics for skin and hair.

Our Morocco tour ends visiting El Jadida (where we visited the ancient medina and an old Portuguese fort declared by Unesco as a World Heritage Site) and then we went back to Casablanca.

Our driver stayed with us till the end of our journey and transferred us to the airport.

Last but not least, one thing I didn’t mention yet is the Moroccan cuisine! If anyone offers you a mint tea it’s a gesture of hospitality and it’s not kind to pass up, it’s a thirst-quenching, it warms you up, it wakes you up and you can drink it in the morning, after meals or at any time. I loved it!

The food of Morocco is one of the best cuisines in the world and it has an incredible variety. Couscous’s the traditional family meal on Friday but you can find it anywhere anytime. It’s cooked with steam and added to meat and vegetables. Another thing you cannot absolutely miss is the tagine (made from spiced vegetables accompanied by meat, chicken or fish); but there are also a lot of things to try: trotters, pastela, rfisa, zaalouk, harira, fried sardines, meat with prunes…. and so much more!

So what are you waiting for? Don’t you want to visit Morocco?