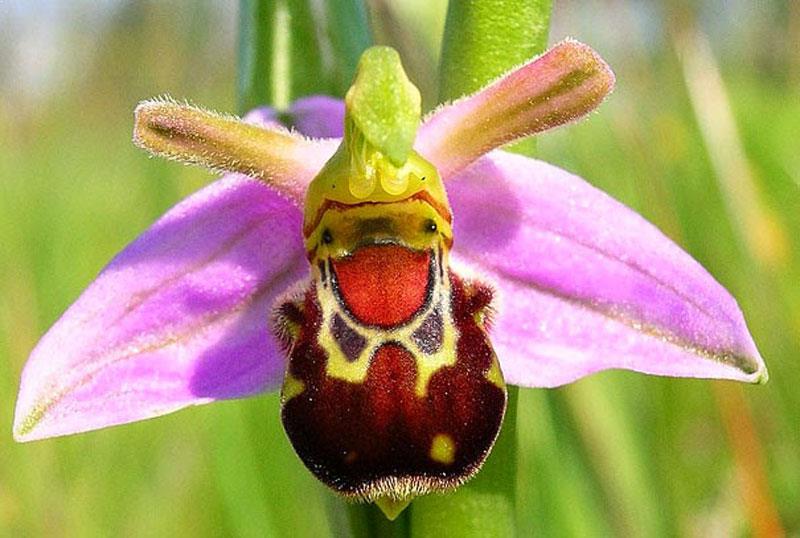 Your garden probably has beautiful roses, lilies, jasmines and chrysanthemums but did you know about these strange yet beautiful flowers that grow in exotic places in the world? Most of these strange looking flowers are orchids because they use the shape of the flower to attract different pollinating animals. Take a look at our list of the ten strange-looking flowers in the world.

This strange-looking flower has evolved to look like a female bumblebee. The petals and sepals resemble the body of a female bee and contribute to an interesting pollination strategy. When male bees see this flower, they get fooled into thinking that the flower is a bee and approach it. In doing this, when they land on the flower, the pollen gets stuck to their bodies and gets pollinated. Also, read about beautiful roses in the world.

Scientifically known as Ophrys bombyliflora, is a species of terrestrial orchids mostly seen in Asia and Africa. These flowers are popularly known as ‘bee orchids’ because it appears like a furry body of a bee. The unique feature is that the flower mimics the shape of a female bee and this resembles tricking other male bees to be attracted to them for mating.

This orchid is found only in the Mediterranean and grows at high altitudes. The plant can grow up to 20 inches tall and bears flowers between March and April. The orchid is named after the shape of its flower which looks like a naked man with a smiling face. These orchids are usually pink or purple and grow in clusters. Though the flower looks like a naked man, it is actually hermaphrodite which means a single flower has both male and female reproductive organs.

Scientifically known as Orchis Italica and it belongs to the Orchidaceae family. The flower species are popularly known as the “hanging naked man” and it is mostly seen in the Mediterranean areas and regions like Jordan, Turkey, Italy, Portugal, Spain, Israel, Greece and many other places. It needs partial sheds because too much light will hurt the plant. The plant can grow up to 20 inches high. 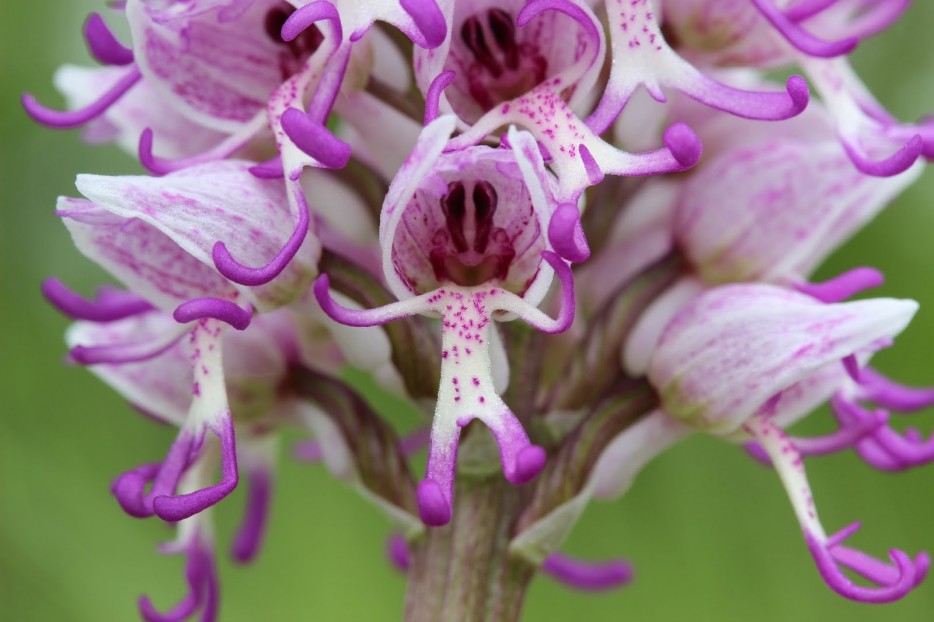 The flying duck orchid is named after the shape of the flower which has an uncanny resemblance to the shape of a duck in flight. This strange-looking flower is found only in Australia and is very small, with its petals measuring up to merely 1.5 centimetres. The petals and sepals have shades of purple and brown on them and the shape is part of a strategy to attract pollinators like insects and small birds.

The strange flower species grow between September and January and the flower can be 1.5 to 2.5 centimetres in length. The colour of the flower can vary from deep red to purple with some parts being green. One of the first specimens was obtained by Europeans was from where the Sydney Opera House of Australia situated in Sydney and it was retrieved in 1803. 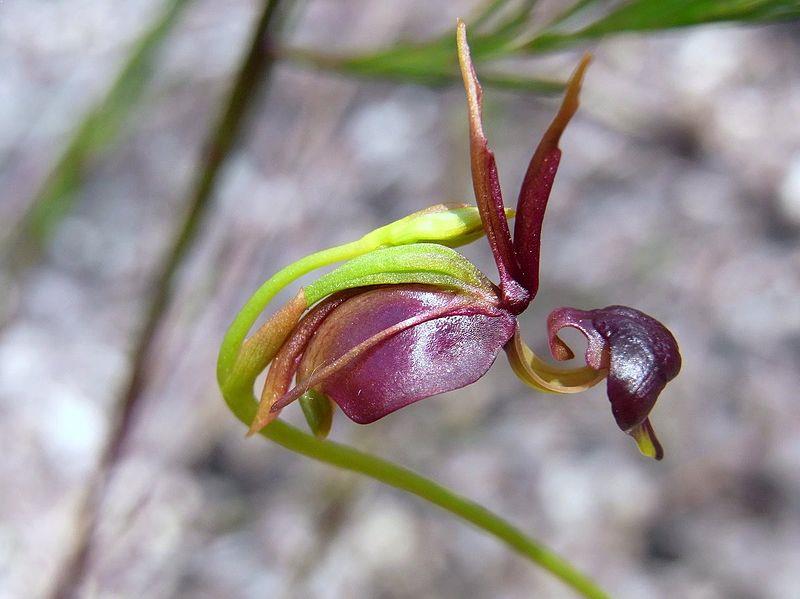 As the name suggests, this flower looks like juicy bright red lips. However, it is not the petals of this flower that are red but rather the bracts i.e. the outer covering that protect the bud before it blooms. These bracts son wither away to give way to a small white petal. This plant is found in the rainforests of South and Central America and the red lip like structures serve the purpose of attracting pollinating animals like butterflies, bees and small birds.

This species is greatly threatened because of the rapid deforestation taking place in the rainforests of South and Central America because of the loss of pollinating species as well as being cut down to make way for plantations and roads. Also, known as ‘” hot lips” or “hooker’s lips.”, however, officially it is known as Psychotria Elata and it is one of the most strange-looking flowers in the world. The leaf-like bracts is from the Psychotria genus in the family Rubiaceae which contains about 1900 different species. The bright colours of the lip like flowers capture the attention of the butterflies and silk moths.

The dancing lady orchids are of many types and colours and are found throughout South America and Mexico. The petals of the flower are of unequal size and are arranged so that they look like a lady dancing in a gown. Each branch of this shrub bears tens of flowers that grow in clusters. Pink, yellow, white and red are the most commonly found colours of this flower though mixed colours are also known.

The blooming season of the flower is mostly between autumn to winter and it appears in various colours such as yellow, and brown, however, it is also seen in red, pink, and purple. The flower was the first officially described by Olaf Swartz, a Swedish botanist, in the year 1800. The word was taken from the Greek word “onkos” which means “swelling or mass that signifies the bump-shaped lips of the flowers. 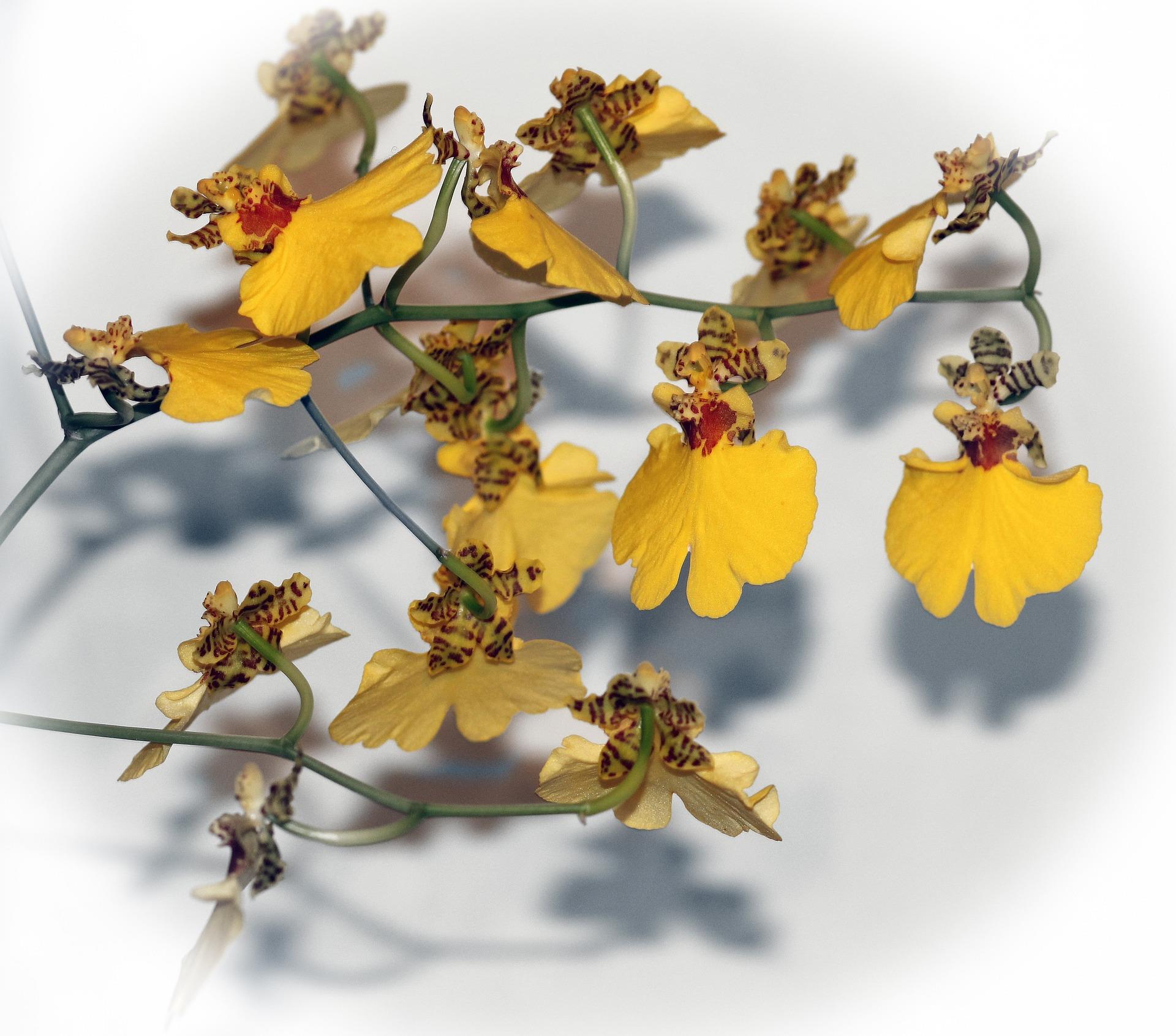 This strange-looking flower is found in Asia and is named after the white coloured farm bird – the egret – also native to Asia. The petals of the orchid are spread out in a way that resembles the egret’s white wings and long neck. It is a small flower, not more than 4 centimetres in length but is full of nectar in order to attract pollinators and ensure the survival of the species. It blooms only once a year in the summer. 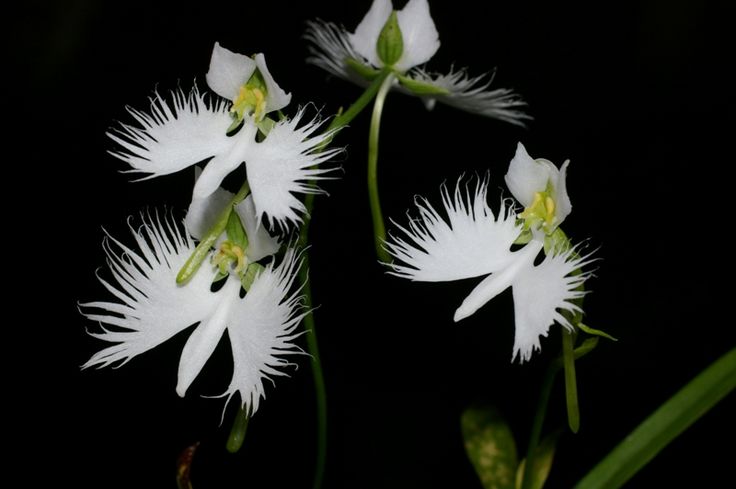 This rare and beautiful orchid grows only in a small area in the Columbian Andes at a high altitude. This strange-looking flower is named after its shape which looks like a blanket swaddling two babies. It is a 10-centimetre long flower that blooms in the summer and has large waxy petals. The shape of the flower is designed to facilitate pollination. When an insect approaches the flower, attracted by its strong smell, and tries to eat the nectar, it gets forced down a long tube at the bottom of which the nectar is located. The anthers (pollen-bearing parts of the flower) are also located at the bottom of this tube and while eating the nectar, the pollen gets stuck to the insect’s body. Thus when it goes to another flower, it transfers the pollen there. 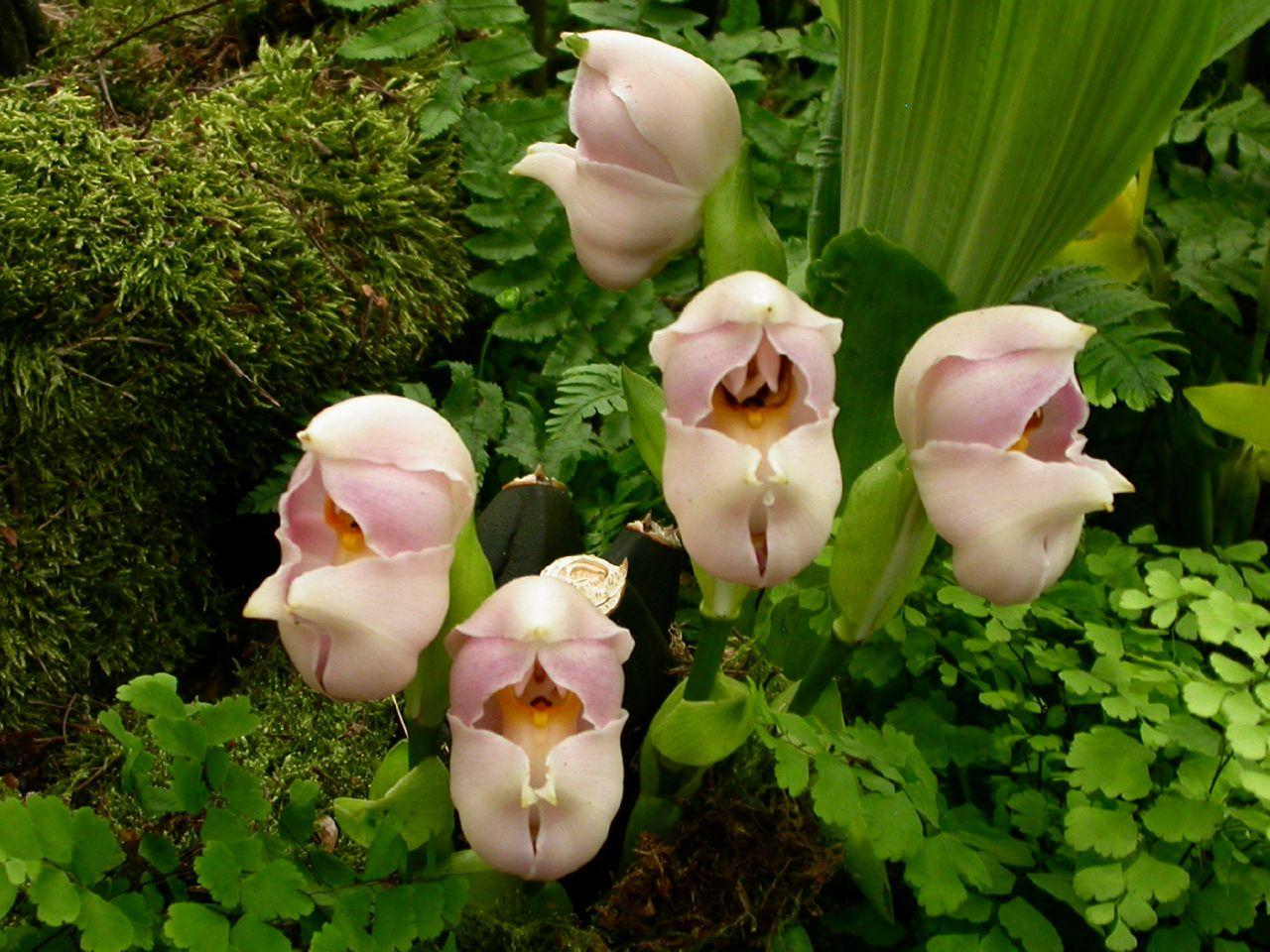 Also known as Darwin’s slipping flower, this flower was first discovered by Darwin in the southern parts of South America. It has bright red, yellow and orange colours with a white coloured band and is a very attractive looking flower. It has a size of 4 inches and blooms only in the summer. Hummingbirds are the main pollinators of this flower and they come to eat the white band. In this process, the pollen also gets transferred onto the body of the bird and when it goes to another flower, pollination occurs. 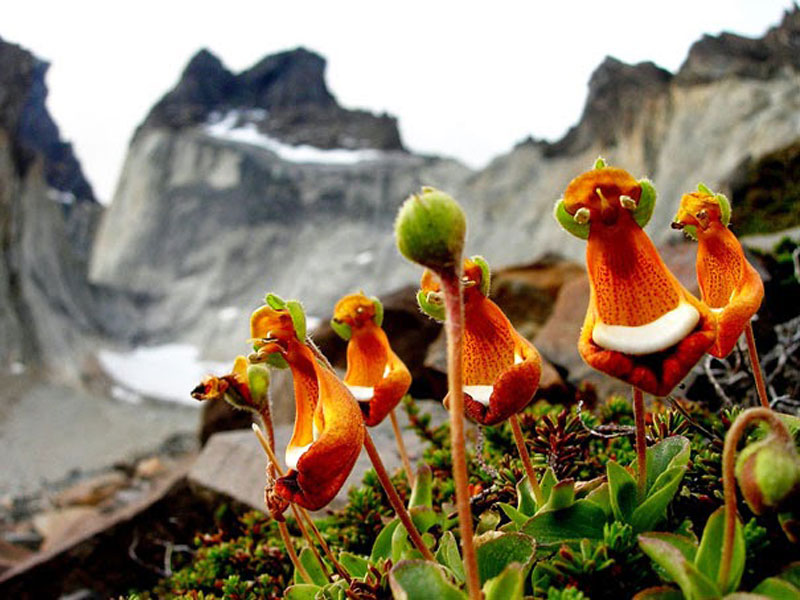 This strange looking flower grows in tropical regions of Asia including in India, Thailand, Malaysia and some countries of East Asia. This rarest flower has black and purple petals and when in full bloom, it looks like a bat in flight. This flower is relatively large with petals 12 inches in length and is mostly black, but may also be purple, brown and maroon depending on the environmental conditions. It is one of the most beautiful strange looking flowers in the world. 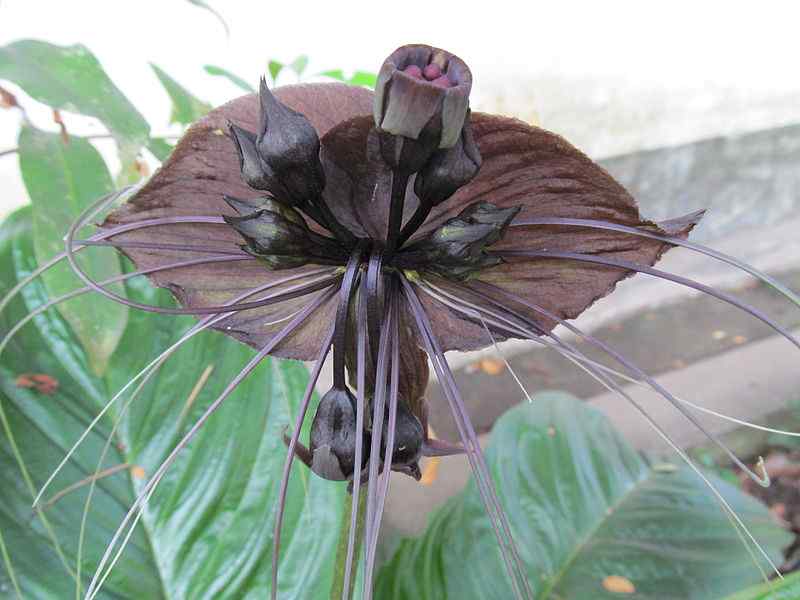 This sinister looking flower has been variously called the Monkey’s hand or hand flower but the deep red colour of this strange looking flower and the finger-like petals do make it look like the Devil’s hand. This flower is native to Mexico and was revered by the Aztecs who harvested the flower for generations. The fruit of this tree is also sometimes used in traditional medicine to cure heart diseases. It is an extremely hardy plant and can grow in a variety of climate including low rainfall.

Would you like to have any of these strange looking flowers in your garden? It is quite possible that you may not have seen any of these flowers before because they are very rare and require specific environmental and climatic conditions to grow. These are very difficult to provide outside their natural habitat which makes it all the more important to protect the natural habitats of these strange looking flowers before they disappear completely due to deforestation.