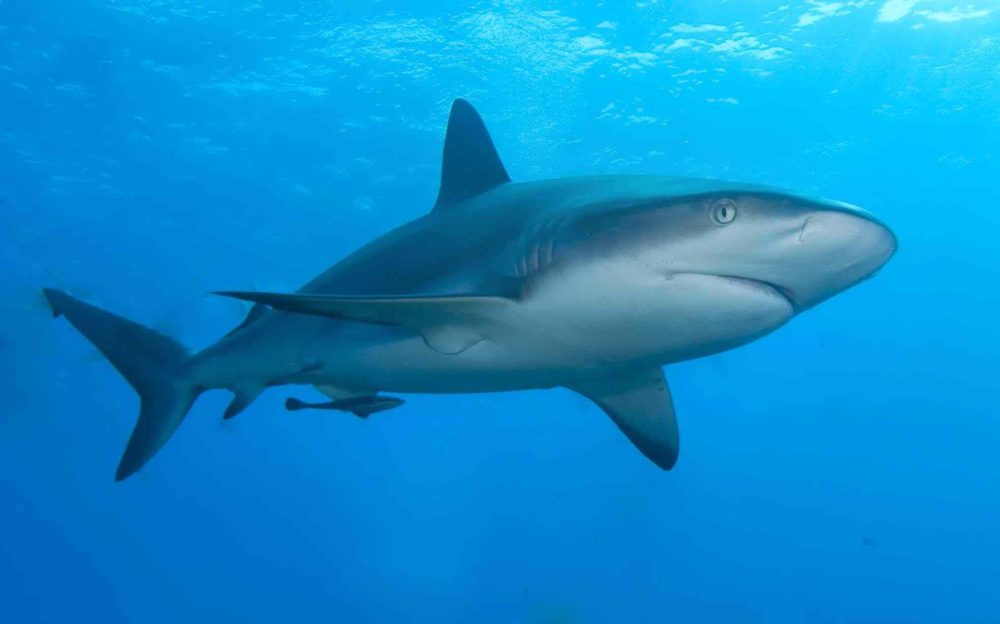 There are more than 465 known species of sharks dwelling in the oceans all over the world! As we know, sharks are considered as one of the most aggressive and threatening aquatic species-almost at the top of the marine food chain- and anyone in their right mind would fear these massive beasts. But on the contrary, are there any harmless shark species? If you are looking for more information about this, you came to the right place. Here are the top 10 least dangerous Shark Species,

The Whale shark is the world’s largest living shark! Oh, and wait, if that’s not enough it is the LARGEST LIVING FISH as well! Whale sharks can grow up to 40-45 ft. and can weigh as much as an enormous 13 tonnes! They have a vast menu to choose from and fortunately for us-and most sea and ocean dwellers- their most cherished food is plankton! They base their diet on small fishes and tiny plants found in the ocean. It is considered as one of the most harmless shark species ever and it is not for nothing they are often called as ‘gentle giants’.Did you know? A whale shark can be as long as a big school bus weighing as much as 50,000 pounds. Also, read about An intersex shark discovered near Taiwan.

The largest non-cetacean animal in the world mostly seen in open waters of the tropical oceans and rarely seen in waters with a temperature below 22 °C 72 °F). Talking about the appearance, the head is wide flat with two small eyes at the front. The mouth is situated at the tip of the snout is approximately 1.5 meters wide. It has five large pairs of gills and has over 300 to 350 rows of tiny teeth, however, the function of these teeth is still known. They have a grey with a white belly and has skin markings of pale yellow spots that are unique to each individual. 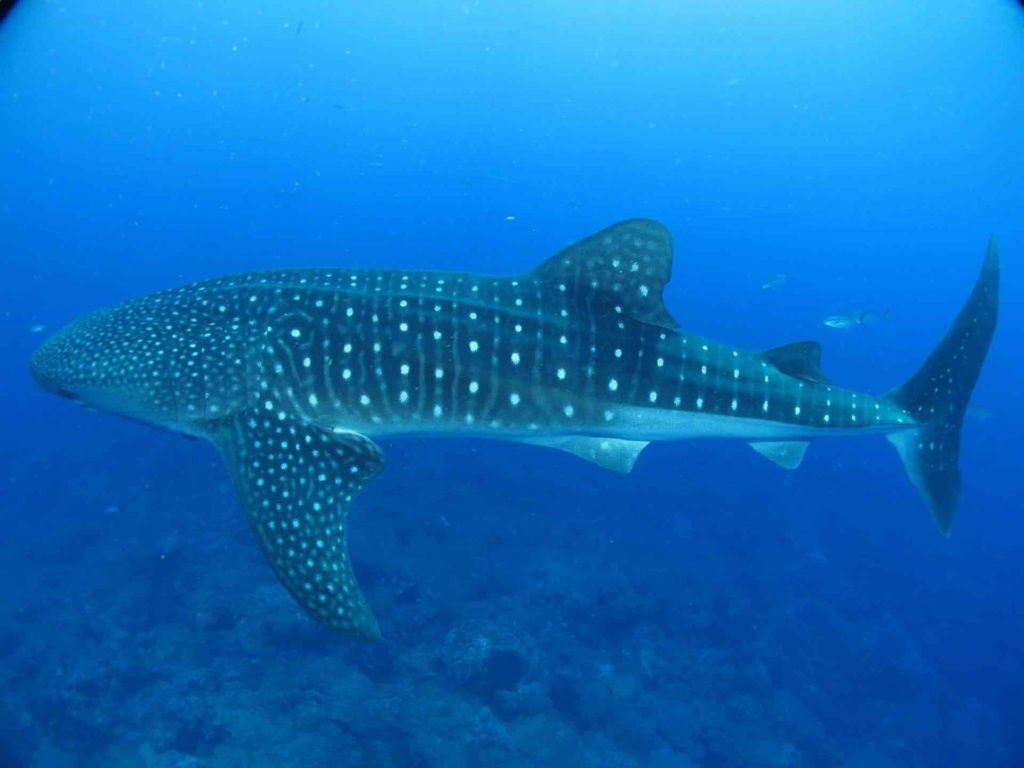 Usually found along the coasts of the Eastern Pacific, the Angel Sharks have flat bodies which help them camouflage and become great ambush predators at the sea-bed. These are predators and hunt fishes and other sea animals which come too close to it but humans are relatively safe. The only time an Angel Shark has been known to attack a human is when it was accidentally stepped on. Otherwise, even though they are considered prolific, they are not known to be aggressive. In fact, where do you think they get their ‘Angel’ name from?

Talking about the appearance, the body of the shark is covered with black, brown, reddish, grey or greenish sandpaper-like skin. The dark splotches and white spots can be spotted all over the back side of the body. This will help in camouflage on the sandy floor. The shark species has a flat body, large pectoral fins and wing-like fins resembles species of rays with two dorsal fins, however, the anal fin is missing. The carnivore animals love to eat fish, crustaceans, molluscs and squids. The species will only attack humans when provoked and injuries can be painful because of long and sharp teeth. 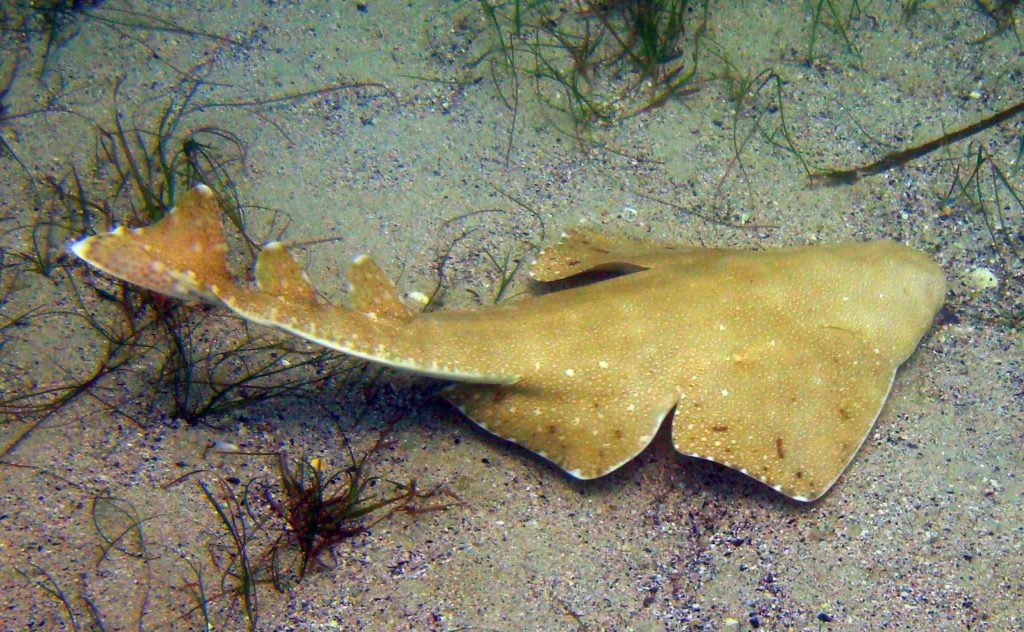 By the look of it, you might find it terrifying, but actually, these shark species are far from that. Also called as the ‘living fossil’-because they are found very deep in the ocean (minimum 100m) – these sharks have retractable jaws along with razor-sharp teeth which help them hunt. But, being so deep in the ocean they are rarely known to ever encounter humans. Till date, there has been not one documented case of a Goblin shark ever attacking a human.

Additionally known as Vampire Shark because it avoids light by living deep in the sea. They are mostly seen at 270 m to as deep as 1300 m (890 ft to 4300 ft) and poses no real danger to the humans. It like to feed on fish, molluscs and crab, however, have bad eyesight. Till now, we don’t have any incident when it attacked a human, however, they fall prey to other sharks such as the Blue Shark. Scientifically known as Mitsukurina Owstoni because the first specimen was found off the coast of Japan in 1898 by a naturalist called Alan Owston. 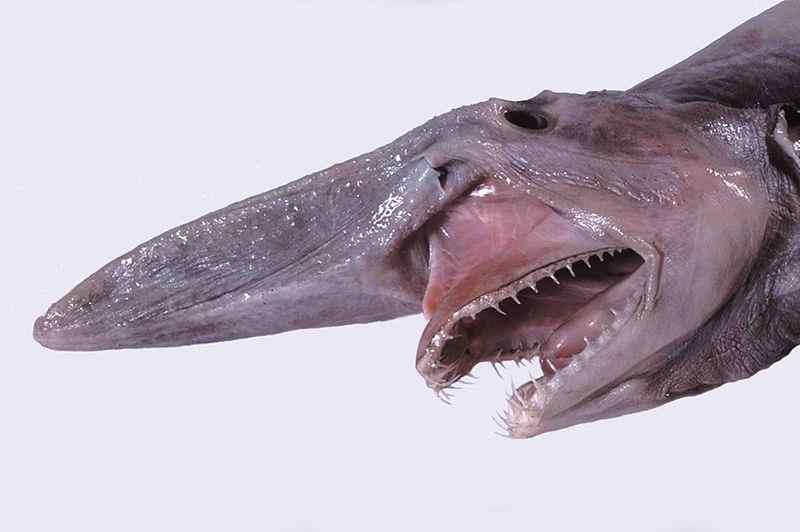 Adult leopard sharks reach a length just over 6 ft. and are known to pretty much keep to themselves. Although they are primarily found in shallow waters, rarely being found 20 feet below the surface, where humans often swim, there has never been a single reported case of a Leopard shark ever attacking humans. They feed on crabs and small fishes around them.

Generally, when they encounter humans, they are known to drive away from them instead of investigating or attacking. Hence, they are considered to present zero threat to people. You will also like reading about oldest animal species on Earth. The species of hound shark can reach upto lengths of over 6 feet, however, the average is less than 5 feet in length. The shark species are more active in the night than during the day and sometimes even seen lying still on the bottom. The average lifespan of the species is approximately 30 years. 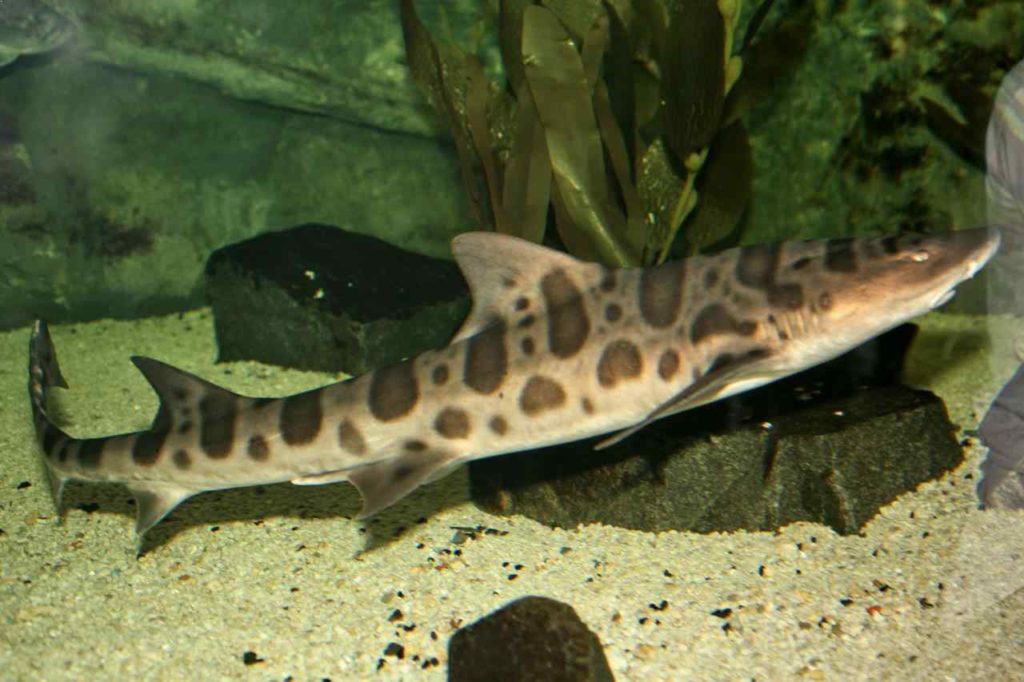 Mostly known to be found along the East Coast of America, the Atlantic coast and southwards, these sharks grow up to 10 meters longs and can weigh 150-170 lbs. They prey on a wide range of fishes, cephalopods and also yellow stingray. The Caribbean Reef Shark is known to be rather passive and in reality, do not pose much of a threat to scuba divers, swimmers or other humans. This fish is known to have such a firm reputation in the vicinity of humans that some ocean guides have turned to feed the Reef Sharks into a whole television show!

The silent sea predator can grow up to 10 meters long and weighs up to 70kg or 154lbs. The shark species is somewhat dangerous to humans but does not have a history of attacks on humans. Additionally known as “Reef Shark”, the species have a unique colour and it appears white to light yellow on the ventral side and grey-brown to dark-grey on the dorsal side. The species is a source of meat and liver oil. 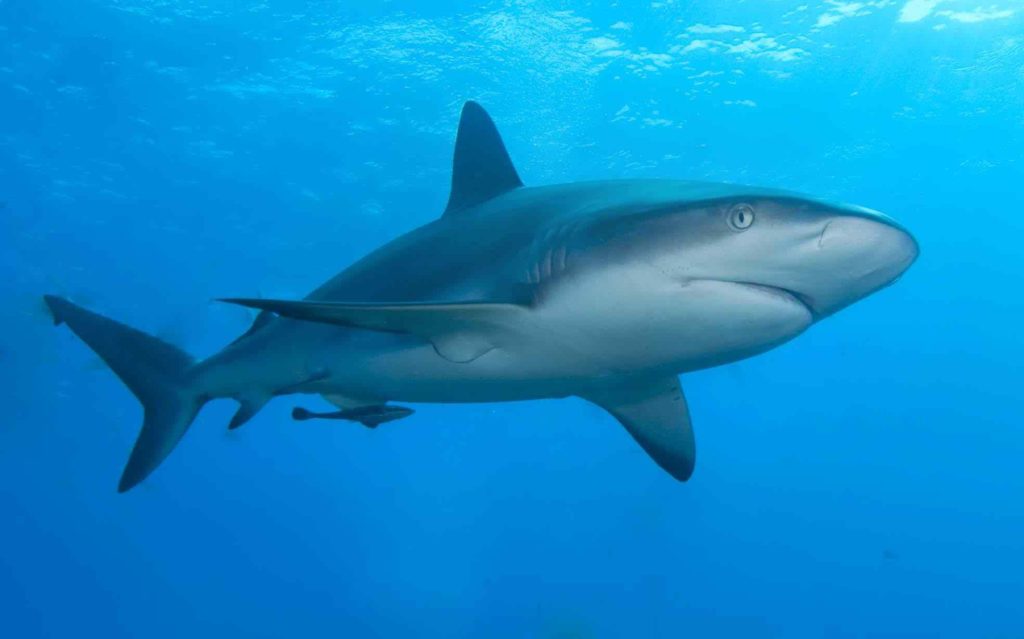 Nurse sharks are slow-moving, bottom-dwellers of the ocean who relatively harmless to humans. Even though they are ferocious predators, there have been extremely few cases of Nurse Sharks ever attacking humans and even when they did, it was when they were directly antagonized and provoked. These sharks can grow up to 15 feet and even though look huge they are not known to be hostile and for the most part, relatively harmless and docile unless they are physically threatened. 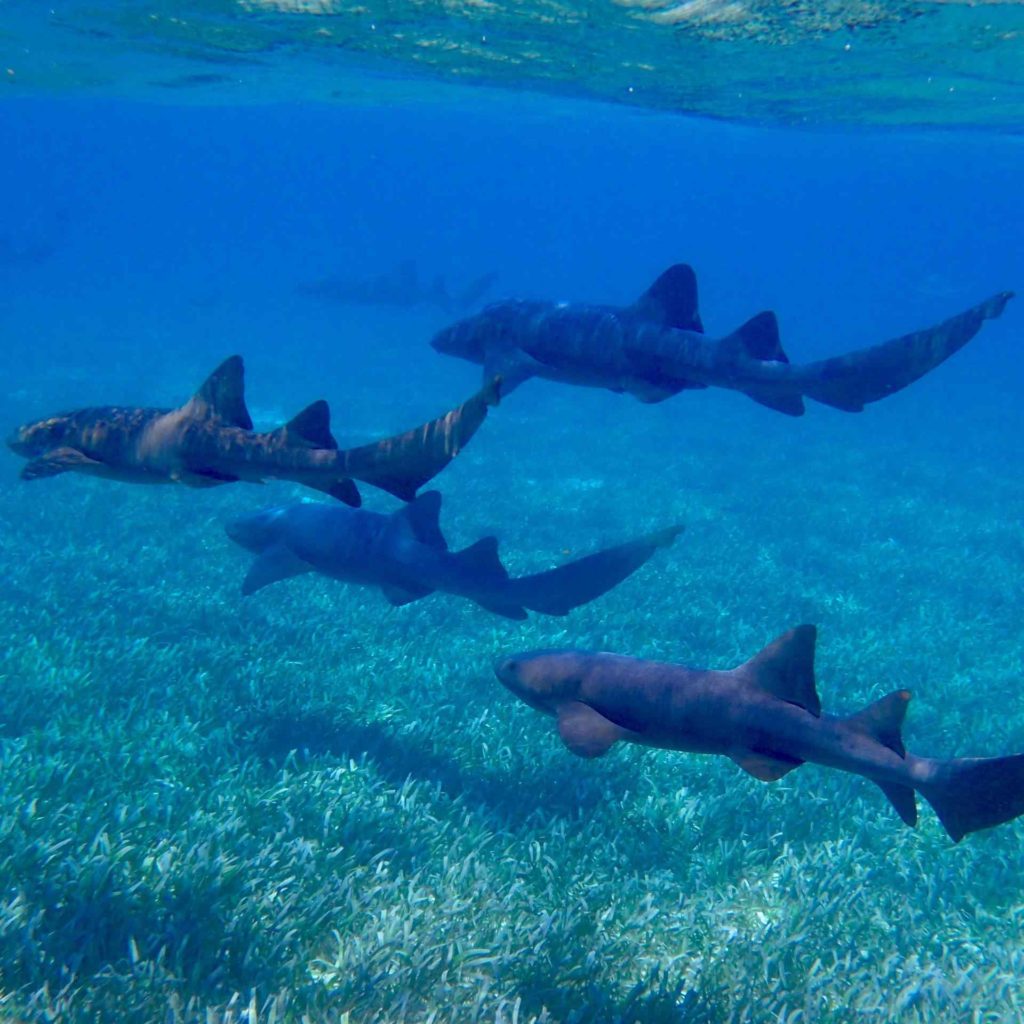 Basking sharks are the second biggest fish in our oceans, second to Whale Sharks and they are considerably similar to them. Just like whale sharks, these shark species are another incredibly large filter feeder, which means that they consume only planktons using a special technique called “passive feeding”. These are passive animals and there has never been an account of basking sharks attacking humans, so you should be pretty safe if you are around one. But these creatures look massive and have really tough skin so humans should be pretty cautious not to provoke this marine beast. 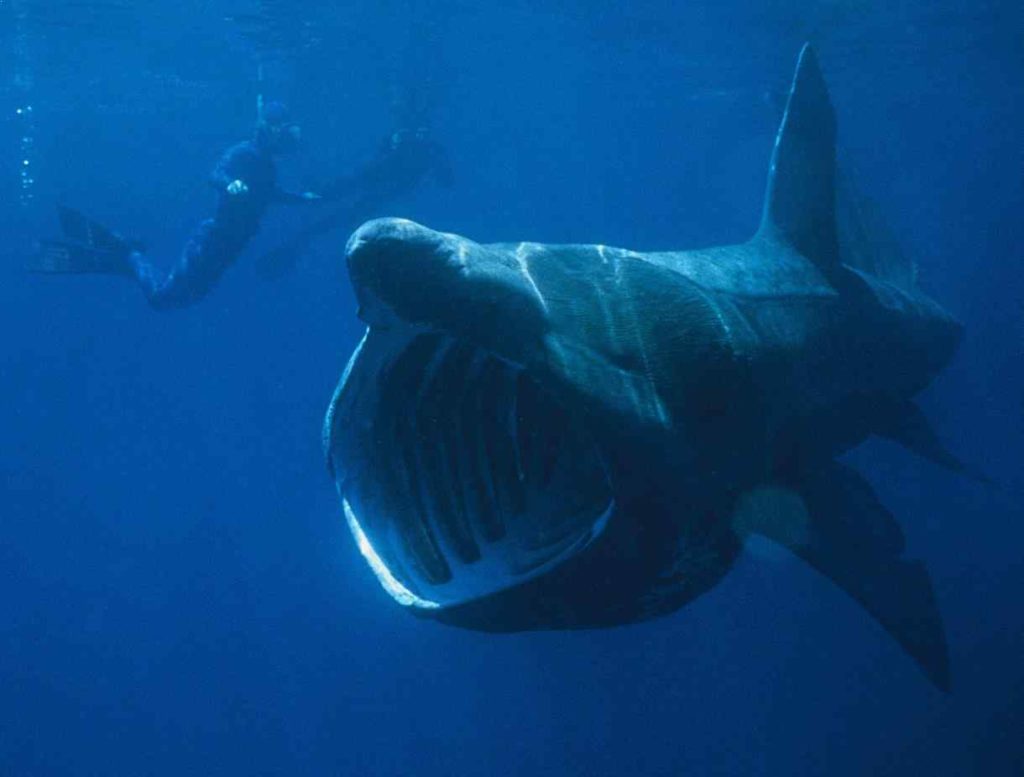 Bamboo Sharks are pretty small sharks measuring around 48-50 inches and are known to be found along the coasts of South East Asia and the Australian continent. They are considered to be remarkable predators but do not have a history of attacking humans ever. These sharks are known to be so gentle and docile that they have been noted to let divers touch and pet them! Taking into account its small size and non-hostile temperament, these sharks are certainly hundred-per cent harmless shark species. You will also love reading about the world’s most amazing animals. 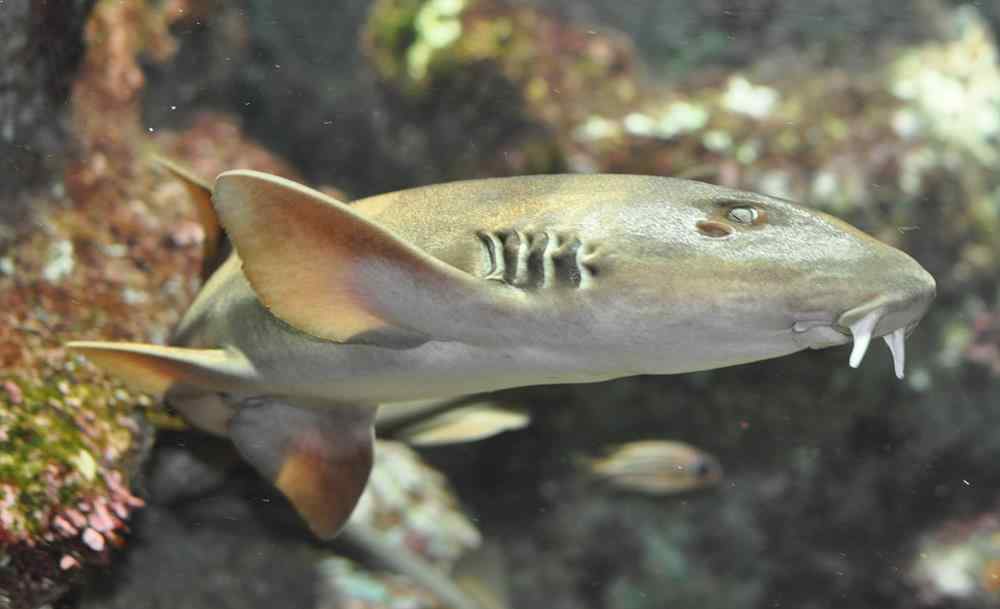 This shark as the name suggests has a huge mouth but ironically, it has tiny teeth! This shark is also a filter feeder mostly relying on planktons and small fishes. These species are really scarce and only about a hundred have been observed ever since its discovery in 1976. So human confrontation has been rare and they are of almost no threat to us. Sand Tiger sharks are another shark species which are considered to be non-threatening. They are found in temperate and subtropical waters everywhere in the world, apart from the Eastern Pacific. While it’s a close relative to the Great White Shark-which relatively eats anything! – these two are found to be polar opposites because the Sand Tiger is harmless to us. This shark species is known to spend most of its time at the bottom, resting on the seafloor feeding on small fishes. 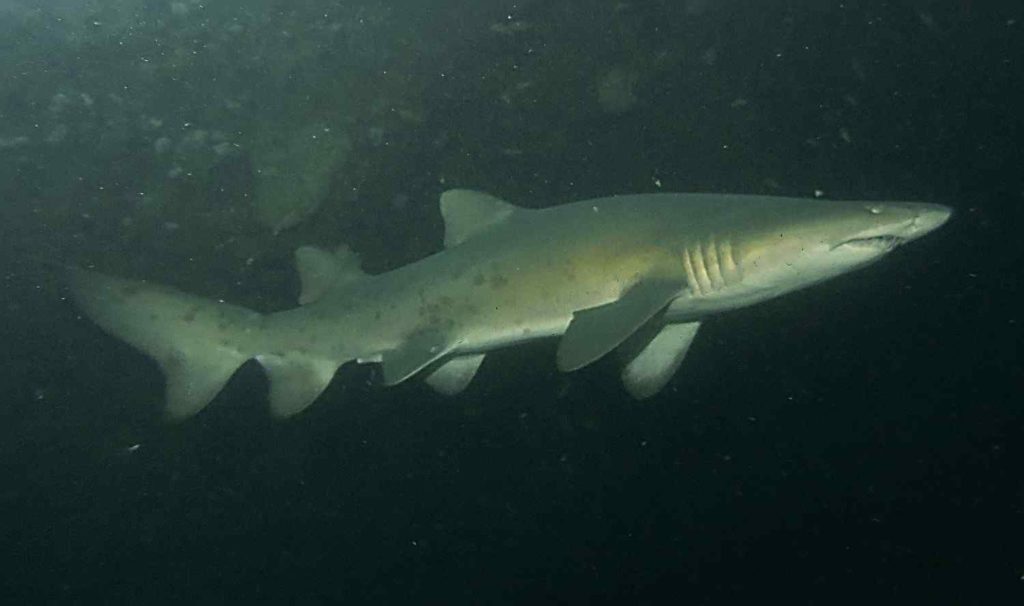 So there it is! The top ten list of harmless shark species and 10 lessons on “there’s more to sharks than that meets the eye”.