In this era of selfies and Instagrammed shots, people have almost forgotten that every self-portrait isn’t a picture clicked with the front camera or on selfie sticks. Self-portraits are a true form of art. Even before the advent of mobile phones and thus the trend of clicking selfies, world-class painters like Vincent Van Gogh, Rembrandt, etc. were taking selfies of themselves through the art of self-portraiture. The artists from the past are believed to have painted their self-portraits because while capturing and portraying all the beauty and reality that see all around them, realised that they themselves are a part of it too. Therefore, here in this blog, we have listed below the 10 most beautiful self-portraits by famous artists.

Self Portraits By Famous Artists

The world famous Dutch painter Van Gogh, creator of the famous painting ‘The Starry Night’ created his ‘Self-portrait’ around the year 1889. This was one among the 40 other masterpieces of his that he produced over a period of 10 years. Due to his lack of money Van Gogh couldn’t pay for models to pose for his painting, hence painted himself. There are two such self-portraits that he created, one with his beard and one without. Even till date, there is confusion among the art critiques as to whether the self-portrait with or without the beard is his final self-portrait. On the completion of his self-portrait with the beard, also known as ‘Self-portrait’, Van Gogh took the painting with him to Auvers-sur-Oise, near Paris, and showed it to Dr Paul Gatchet who though the that the painting was “absolutely fanatical.” He painted it a year after he cut off his own ear. Van Gogh’s ‘Self-portrait without beard’ is arguably one of the most expensive self-portraits by famous artists ever sold. 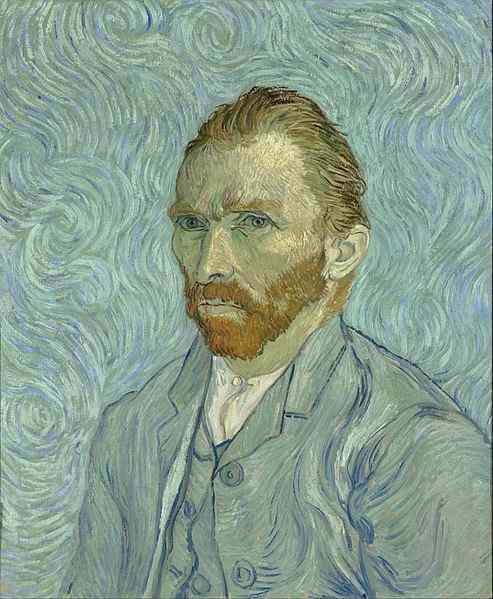 Yet another Dutch painter, Rembrandt van Rijn left behind a rich legacy of painting as well as photography that till date influences painter all over the world. Rembrandt painted his self-portrait in the year 1660 when he was 54 years old. The self-portrait depicts his wrinkled brows with a worried expression that clearly portrays the troubled condition of his mind at that point of his life since the year 1660 was a year of anxiety for him. This self-portrait is one among his over one hundred self-portraits including over forty paintings, thirty-one etchings and about seven drawings that he produced in his painting career. Definitely one of the most famous self-portraits by famous artists, Rembrandt’s self-portraits found its place among the Benjamin Altman Collection, which is exhibited in the Metropolitan Museum of Art since 1913.

Related: Top 10 Most Famous Paintings in the World 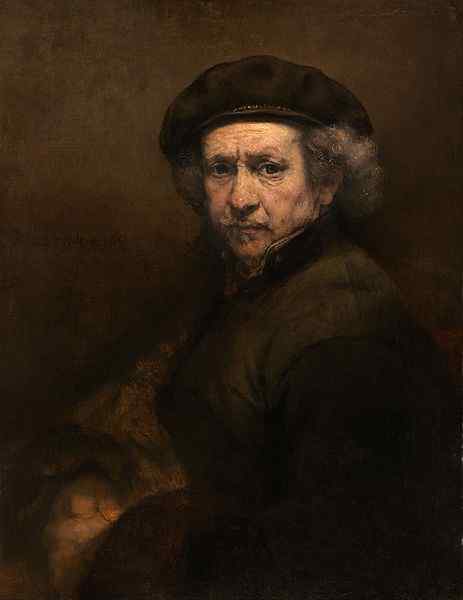 The self-portrait of Leonardo da Vinci from 1512 is accepted globally, however, it is not certain. The painting is a self-portrait of da Vinci at the age of 60 and measures around 33.3 cm × 21.6 cm and put it on the display in Biblioteca Reale, Turin, Italy. The portrait has been reproduced and listed as the iconic representation of Leonardo as a polymath or “Renaissance Man”. It is drawn with red chalk on paper and it represents the head of an elderly man in a three-quarter view, the subject can be distinguished by his long hair and long waving beard which flow over the shoulders and chest. In the portrait, the length of the hair and beard is uncommon in Renaissance portraits. The face can be seen clearly with an aquiline nose and is marked by deep lines on the brow and pouches below the eyes. By analysing, one can imagine the man has lost his upper front teeth and it caused deepening of the grooves from the nostrils. Her self-portraits by excellence are listed among the world’s best self-portraits by famous artists.

One of the beautiful self-portraits by famous artists Raphael was drawn at the age of 23. It measures around 45 cm x 33 cm and located at the world-famous Uffizi Gallery. The self-portrait was believed to be dated back between 1504 and 1506. It was noted in the inventory of the private collection of Duke Leopoldo de’ Medicine and later completed in 1675. The Italian Renaissance painter used oil on board to draw one of the best self-portraits by famous artists. It represents the clearest and recognizable depiction of Raphael himself. Since the painting found in the bank vault, so it was under scrutiny for quite some time.

Edgar Degas made this self-portrait only when he is twenty-one years old, after that he has taken the road to Italy. One of the most remarkable of his fifteen self-portraits. Degas seated as seemingly without fear and anxiety. The pose in the painting was formal and academic and related to the work of Ingres, The painting was sold to the French State in 1927 at the posthumous sale of the collection of his brother Rene Degas. It was done on the behalf of Louvre. One of the self-portraits which are no doubt incredibly famous and are ranked among the most incredible self-portraits by famous artists. Currently, it is located in the musée d’Orsay, Paris, France.

Additionally known as “Portrait of a Man in a Red Turban”, it was created by the famous artist Flemish painter Jan Van Eyck and believed to be a self-portrait. The oil painting was created in 1433 and inscription at the top of the panel Als Ich Can also be known as for I/Eyck can” was considered as an autograph from for van Eyck, however, it is seen little large and prominent. Jan van Eyck work has found its place among the most beautiful self-portraits by famous artists and currently, it is placed in the National Gallery, London, since 1851, having been in England since Thomas Howard, 21st Earl of Arundel acquired it. It is believed that it has been acquired in Antwerp from 1642-44.

Related: 10 Most Famous Works Of Art

The leading figure of the famous visual arts movement called Pop Art that integrated popular imagery into other visual media, Andy Warhol was an artist, photographer, painter, musician as well as a visionary. Warhol ‘Warholized’ himself in his self-portrait in his remarkable signature style just like he did with the portraits of Marilyn Monroe or Campbell’s soup. Warhol is also the man behind the phrase, “everyone will have his fifteen minutes of fame.” Definitely, among one of the best self-portraits by famous artists, Warhol’s self-portrait is a remarkable example of him iconizing the 20th-century modern culture and its derivatives. 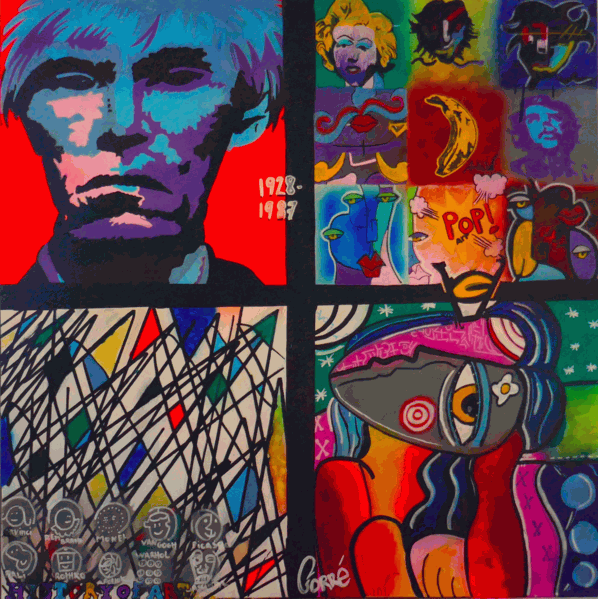 The Neue Galerie opened the self-portrait painting bu the greatest and one of the most resonant paintings by the German Expressionist artist Max Beckmann (1881-1950) on On July 24, 2008. It was painted in 1938, just after Beckmann fled Nazi Germany to seek refuge in Amsterdam. The artist shows himself isolated and withdrawn. It is also depicted that island of his soul and the glance suggest that he is sunk in his own dark thoughts, however, he highlights the head, hands, and musical horn that focuses on the attention of his intellect and spirit. One of the self-portraits by famous artists truly shows abiding faith in the dignity of the individual.

Image Source: Wikipedia Under Fair Use

The beautiful self-portrait of Picasso was painted before his Blue Period and it measures around 81 x 60 cm. Currently, the oil canvas painting located at the Picasso Museum (Musée Picasso) in Paris. Itw as drawn during his second stay in Paris in the winter of 1901 and later, he returned to Barcelona in January 1902. The painter was only 20 years old when he drew this amazing self-portrait, however, he appears considerably older in this portrait. The face is drawn and gaunt from the hardships of the Parisian winter. The tones are cool especially the deep purple of the coat and even the light that have an “anaemic” brushwork except in the face in order to keep it as the stark, ascetic image.

The portrait has been popular for its natural insight and believed to date back between 1595 and 1600. The oil on canvas painting by El Greco usually identified as a self-portrait and shows an influence of Titian and Tintoretto that has been picked by El Greco in Venice. Currently, it is placed n the Metropolitan Museum of Art in New York, however, there is no documented portrait of the artist but it seems he has cast himself in the supporting roles within some of his pictures and these bear some resemblance to the present sitter.

These are the beautiful self Portraits by famous artists. Do post your comments.