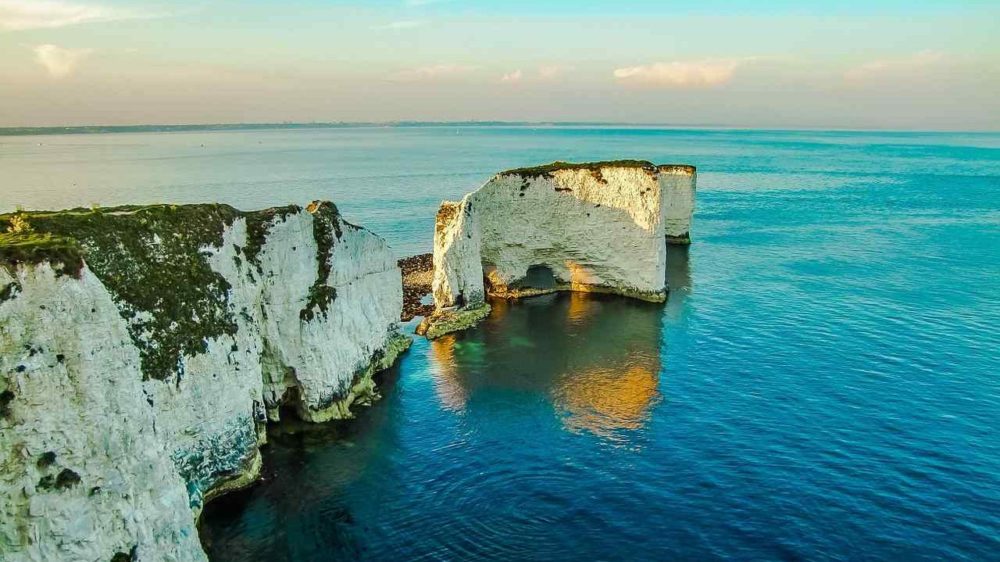 It won’t be wrong to refer sea stacks as one of the most amazing natural wonders in the world. It is surely a priceless creation of mother nature which attracts ramblers, climbers, geologists, and photographers. It is popular for its enigmatic locations and isolated existence. Sea stacks take millions of years to form. As the name hints, sea stack is a huge sheaf of rocks in the sea which appears like a towering stone isolated from the main coastline. Their occurrence needs a water body, a cliff and millions of years. Erosion of rocks by water and wind over time gives birth to the amazing sea stacks. There exists on all seven continents. Let’s enhance our knowledge on the top 10 sea stacks of the world.

At the southern end of Studland Bay, Old Harry can be located easily. Being one of the most popular landmarks on the South Coast which is managed by the National Trust, they are declared as Jurassic Coast World Heritage Site
It is a group of three chalk formations kind of thing which together are referred to as Old Harry Rocks. Although this name was originally meant to refer the single stack of chalk which is located furthest out to sea.

There was a time when another stack known as Old Harry’s Wife was present there, but it tumbled into the sea because of erosion. As per the facts, thousands of years ago, Old Harry and The Needles on the Isle of Wight were connected by a line of chalk hills that eventually eroded away. Both cyclists and pedestrians are found on road leading to Old Harry.

Also Read: 10 Places To See The Most Beautiful Sunset

Sail Rock, popularly known ‘Hin Bai’ in Thailand, is the main scuba diving site in the Gulf of Thailand. To reach Sail Rock, one has to travel for an hour and a half by boat from Koh Tao. This 8m tall rock provides dive site with a max depth of over 40m. A lot of part of this huge rock lies underwater. Since Sail Rock is far away from the islands, marine life is found in abundance. Divers can encounter schools of barracudas, batfish, whale sharks along with many tiny creatures hiding in the wall. This usually tops the list of the divers of Thailand.

Residing in Sarawak, a state of eastern Malaysia, on the island of Borneo is The Bako National Park. It is known for its coastline of steep cliffs, scenic sea cliffs and stretches of sandy bays which took millions of years to form due to the erosion of the sandstone. The sea stack located in front of the beautiful beach of Pandan Kecil is the most prominent attraction of this park and resembles a cobra head coming out of the water. The highly endangered proboscis monkey can be found in the Back park. It is a habitat to an incredible variety of plant species and vegetation types.

Ko Ta Pu, most emblematic karst limestone tower located among the turquoise sea waters, is a treat for human eyes and is really popular because of this spectacular view. This is tiny islet which is just 66 feet tall and is a part of a bigger island off the coast of Thailand known as Khao Phing Kan. It was formed hundreds of millions of years ago due to water erosion. It was left undiscovered until it was featured in Hollywood’s most popular hero, James Bond’s movie. After it got global recognition, it is visited by thousands of tourists every year.

Also Read: 10 Amazing Facts About Caves Of The Crystals

The Old Man of Hoy stands 449-foot tall on the north coast of Scotland. Composed of Red Sandstone, it is definitely one of the tallest sea stacks located in the United Kingdom. Really popular among climbers, this sea stack was first explored in 1966. Around 60m wide gorge separates the stack from the neighbouring cliffs. This stack which is horizontal beds of red and yellow sandstones rise lies upon a podium of dark basalt lava.
The Old Man is often referred to as geological juvenile as it was formed less 400 years ago and perhaps will collapse soon.

Located in Buntsandstein in the North Sea island of Helgoland, Germany, Lange Anna or Tall Anna is a sea stack which stands 47 metres. Locals call it as Nathurn Stak (Northern Stack). The rock is just meant for viewing purposes as climbing is prohibited. This sea stack is very similar to the Old Man of Hoy or Old Harry and was designated as a natural monument in 1969. The stack is becoming a victim of severe weathering wear and decomposition every passing day and nothing can be done to slow the process. As per experts, the top two third layer can collapse anytime.

One of the most popular destinations in Galapagos is the well-known sea stack named Kicker Rock. It is also famous as León Dormido. A volcanic eruption led to its formation hundred of years ago and erosion by the sea across all these years gave it the shape of a sleeping lion after which it is named as Leon Dormido. This amazing sea stack stands 500 feet tall above the Pacific Ocean and is home to a large variety of flora and fauna. It is an underwater paradise because of its picturesque location and unique ecosystem.

One of Oregon’s most recognizable landmarks is Haystack Rocks. It is a habitat of colourful tidepools and diverse birdlife. It towers 235 feet above sea level. Colourful sea stars and other fascinating tidepool creatures can be found in its intertidal area during the time of low tides. It is known to be bird watchers paradise because of diverse varieties of birds found there at all times of the year. It was formed millions of years ago due to lava flows and contributes to Oregon geological history. This sea stack is a part of the Oregon Islands National Wildlife Refuge and is a State protected the marine environment.

The Twelve Apostles is a group of limestone stacks, residing in Port Campbell National Park near the Great Ocean Road in Victoria, Australia. Their closeness to each other attracts thousands of tourists every year. One of the original eight collapsed in July 2005, but the other 7 stacks remain standing at the Twelve Apostles viewpoint. harsh and extreme weather conditions resulted in the formation of The Twelve Apostles because of erosion.

Risin og Kellingin (Risin and Kellingin) are two sea stacks located near the island of Eysturoy in the Faroe Islands near the town of Eidi. The meaning of the name Risin og Kellingin id Giant and the Witch which signifies an old legend which goes as:
“Once upon a time, the chief of Iceland sent a giant and his wife, witch to steal Faroe island for Iceland. They were supposed to work only during the nights because sun rays would have turned them into stone. But however, they were so busy trying to steal Faroe island that they failed to when sun rays emerged. Resulting which they turned into stones, which is now named Risin and Kellingin. The Giant (Risin) is the 71m stack further from the coast, and the witch (Kellingin) is the 68m pointed stack nearer land, standing with her legs apart.

These are the beautiful sea stacks in the world. Do post your comments.