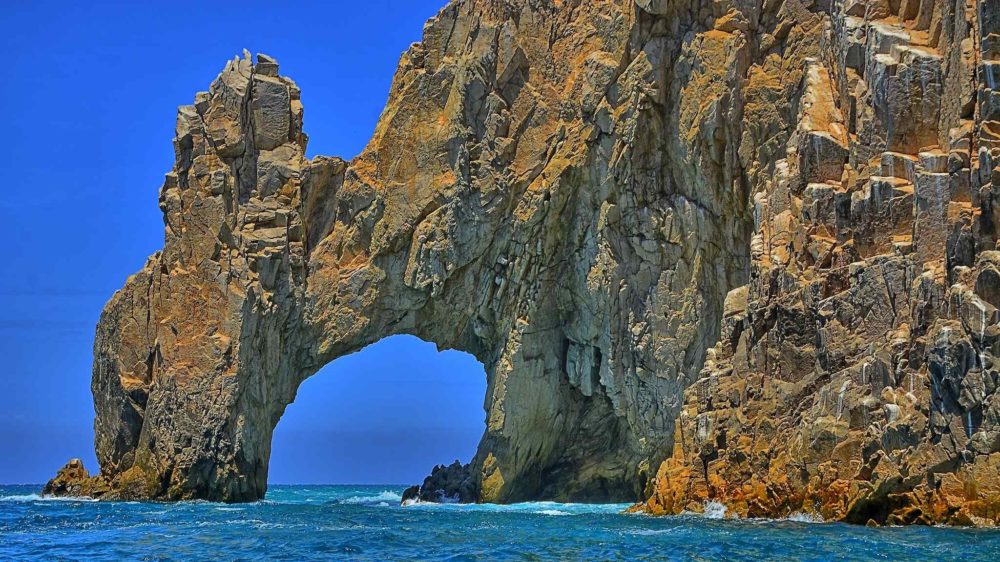 Sea Arch is a natural opening in the shape of a cliff, it is developed when the waves collide with the rock. Arches are formed when the waves attack the weak portion of the rock. Here is the list of top 10 incredible sea arches around the world,

Durdle Door is located in Lulworth Estate in South Dorset. The formation of Durdle Door began 140 Million years ago, there are some Donut shaped imprints on the rock. It is formed by a hard crust layer of limestone. Durdle Door is a privately owned property which is open for people visitors. The length of the arch is 120 meters. Durdle Door is one of the famous cost in Jurassic coast. It comes under the World Heritage Sites.

Legzira Beach is located to the South of Agadir in Morocco. It is the most famous and unique beach in Morocco, there were two arches but one collapsed in the year 2016 due to wave action and the second arch is also considered to be at risk and is continuously monitored by UNESCO. It is a massive arch that is red in colour and glows red at the time of sunset. The are various adventures such as hand gliders and parasailers.

Wharariki Beach is also known as “The Jewel of Tasman”. The Beach is located on the North edge of New Zealand South Island. The visitors to the beach are less as compared to the other Beaches and to reach the Beach you have to cross the forest and sand dunes. The best time to visit the beach is at the time of low tide where you can travel the full length of the beach and enjoy horse riding. The people who like trekking and climbing will consider it the best beach in New Zealand.

Also Read: Top 10 Most Unusual Beaches Around The World

Also known as “The Beach of the Cathedrals” it is named as “The Beach of the Cathedrals” due to the rock formation which looks similar to the Gothic Cathedrals. The beach is located near Ribadeo in Spain. Some of the arches are only visible at low tide and it is the best time for a walk. The arch has a height of 90 meters. It is a popular destination in Spain for the people who are in love with nature. From the year 2015 limited tourists are allowed to enter the beach i.e. Five Thousand.

El Arco is also known as “Los Cabos”. It is a popular tourist destination mainly due to the amazing weather. The Arch is located where the Gulf of California meets the Pacific Ocean, It is the second-longest peninsula in the world as compared to others. The Arch is the main photoshoot point and the Sea Lions can also be seen in the Peninsula. There is a crowd of tourists between November and March to watch the Whales. The water of the sea is most likely safe to drink and is used by Hotels and Restaurants. There are famous spots for water sports such as surfing and diving.

Cathedral Cove is located on the Coromandel Peninsula in New Zealand. The cove can only be reached by boats or by walking through the forest. There are two amazing beaches in the area which separates each other by a huge Rock Arch. The beach has dense sand and Pohutukawa trees all across the area near to the shore and serves as the main spot for a photoshoot. Near to the beach, there is a large pinnacle of Breccia Rock. The rich are there from Centuries and is carved by wind and sea waves, it is in the shape of a large ship moving towards the shore.

One of the most beautiful sea arches in the world, Azure Window is also known as ”Tieqa tad-Dwejra”. It is located on the Island of Gozo in Malta. It is a limestone Arch and is a popular tourist destination in Malta. The Arch is a famous spot for a photoshoot and is also shot in movies and shows. The Arch is almost 500 years old, but in last 30 years, there was a speeding up in the erosion of rock which results in the wide opening of the Arch and this lead to submerge a large part of rock from the left side in April 2012.

The Arch is located on the Na Pali Coast on the Island of Kalalau. It is one of the tallest curves in Hawaii. It consists of two beaches that separate each other by Honopu Arch. Honupu means the “Counch shell” It got its name due to the sound which generates when the Northern wind blows within the Arch. Honopu Arch can only be reached by swimming and boats, but the boats cannot dock up in there and need to leave after dropping the visitors.

Hopewell rock is located on the Bay of Fundy in Canada, It is also is known as “Flower Pot Rock”. There is extreme Tidal condition in this area and the ground is covered by water twice to thrice times per day. As there is a large amount of seawater entering and leaving the area so, it results in flowing off the sand or tiny rock particles. The tourists wait for the whole day to visit the high tice wave and the highest tide visited till today is about 16 meters in height although waves vary from day today. It is one of the most beautiful sea arches in the world.

The Arch is located on Anacapa Island in California. The 12 meters long Arch Rock is the extension on Anacapa Island. It is a natural limestone arch formed when the high-speed waves collide with the arch due to glacier melting. This Arch is an amazing natural beauty and is too massive that it can be seen through a long distance. The Arch can only be reached by foot, taxi, boat.