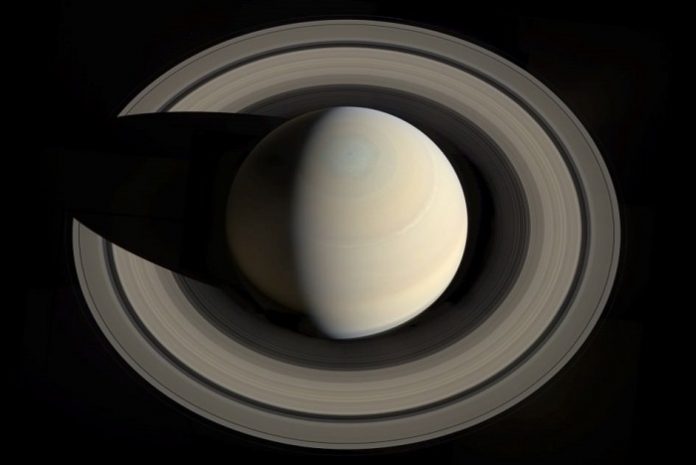 The universe beyond our planet has a ton of breathtaking sights to see, but one of the most beautiful is the Saturn and its rings. Unfortunately, scientists have some bad news for astronomy buffs, as it seems those rings won’t last forever. Almost forty years back, the Voyager 1 and 2 missions visited the Saturn system and captured some stunning, high-resolution images of the planet’s atmosphere and highlighted its many moons, and its iconic ring system. In addition, the probe also revealed that Saturn was slowly losing its rings, and they would disappear in about 100 million years.

The study, which recently appeared in the journal Icarus, was led James O’Donoghue of NASA’s Goddard Space Flight Center and included members from the NASA Jet Propulsion Laboratory, the Center for Space Physics, the Space Research Corporation, the University of Leicester, and University College London.

More recently, the Cassini orbiter visited the Saturn system and spent over 12 years studying the planet, its moons and its ring system and revealed that Saturn is losing its rings at the maximum rate as predicted by the Voyager missions.

Also, New observations from the Keck telescope in Hawaii tell us that there is around 1,814 kg of ice drops to Saturn’s surface every second, enough to fill an Olympic swimming pool in 30 minutes. And according to NASA, if the ring rain stays at that rate, Saturn will lose its inner rings in about 100 to 300 million years.

Related: Top 10 Amazing Things You Can Only Find In Outer Space

The Rings of Saturn, most extensive ring system of any planet in the Solar System were discovered by Galileo Galilei in 1610. 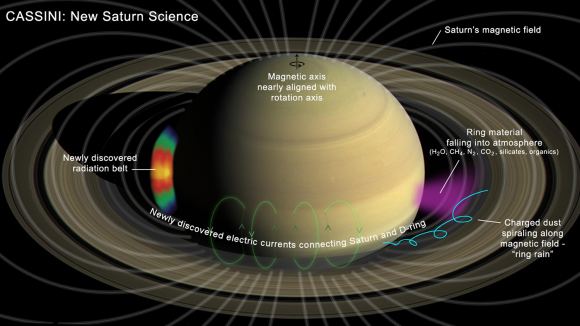 According to the data obtained by the Voyager probes in 1980 and 1981, icy particles from Saturn’s rings are being pulled in by the planet’s gravity after becoming subject to Saturn’s magnetic field which turns them into a dusty “ring rain” in Saturn’s upper atmosphere. The Cassini craft went where no spacecraft has ever dared to go and was not even designed to fly in this environment and studied the loss of Saturn’s ring material as part of its Grande Finale, where the spacecraft spent its remaining fuel conducting 22 orbits between Saturn and its rings.

“We are lucky to be around to see Saturn’s ring system, which appears to be in the middle of its lifetime,” says James O’Donoghue of NASA’s Goddard Space Flight Center in Greenbelt, Maryland.

In 1986, Jack Connerney, A researcher from NASA’s Goddard Space Center and a co-author on the recent study published a research paper and proposed that electrically charged ice particles from Saturn’s rings flowed down invisible magnetic field lines and were deposited as water in Saturn’s upper atmosphere. According to Connerney, these particles became electrically charged either by UV radiation from the Sun or by plasma clouds caused by micrometeoroids, thus bombarding the rings. The team also discovered a glowing band at a higher latitude in the southern hemisphere, which happens to be the spot where Saturn’s magnetic field intersects with the orbit of Enceladus.

These particles, according to Connerney, became electrically charged either by UV radiation from the Sun or by plasma clouds caused by micrometeoroids bombarding the rings. Once that happens, the particles would feel the pull of Saturn’s magnetic field and would be pulled in by Saturn’s gravity along field lines that would deposit them in the upper atmosphere.

These ice particles would then vaporize and chemically interact with Saturn’s ionosphere, which would have the effect of washing away the haze in the stratosphere. These areas would appear darker in reflected light, thus creating the appearance of darkened bands in Saturn’s atmosphere. Another outcome would be an increased lifespan in the electrically charged particles known as H3+ ions (which are made up of three protons and two elections).

The presence of these ions was how O’Donoghue and his team were able to confirm Connerney’s theory. Using the Keck Telescope, the team was able to observe these ions in Saturn’s northern and southern hemispheres thanks to the way they glow in the infrared spectrum (which happens when they interact with sunlight). These bands were observed in spots where the magnetic field lines that intersect the ring plane enter the planet.

They then analyzed the light to determine the amount of rain interacting with Saturn’s ionosphere, which would indicate how much in the way of ice particles were being pulled from Saturn’s rings. What they found was that it matched the high values derived by Connerney and his colleagues in their 1986 study.

The team also discovered a glowing band at a higher latitude in the southern hemisphere, which happens to be the spot where Saturn’s magnetic field intersects with the orbit of Enceladus. For some time, astronomers have known that the geysers that periodically erupt from Enceladus’ southern polar region (which are the result of geological activity in the interior) are responsible for replenishing Saturn’s E-ring.

Now, the team need to analyse how the ring changes as a result of the seasonal change on the planet. Saturn orbital period is 29.4 years and it is one of the primary causes of its rings to be exposed to varying degrees of sunshine.