“In the darkness, you could hear the crying of women, the wailing of infants, and the shouting of men. Some prayed for help. Others wished for death. But still more imagined that there were no Gods left and that the universe was plunged into eternal darkness.”

That’s how Pliny the Younger—an eyewitness to the chaotic eruption of Mount Vesuvius—described how the once-glorious Italian city of Pompeii descended into abysmal darkness. In fact, this is one of the most famous and deadliest catastrophes ever recorded in history.

Nevertheless, the destruction of the city of Pompeii was nothing more than a thing of the past. Today, its ruins are one of Italy’s most popular tourist destinations. Ironically, it was the cataclysmic eruption of Mount Vesuvius that made it so popular among tourists and locals.

Pompeii is also the second-most visited attraction in Italy, next to the Colosseum. It garners an average of 2.5 million tourists every year, which isn’t surprising, considering its historical origins and offerings. These make Pompeii worth traveling. For more details, check sightseeingtoursitaly and book a trip right away.

A Brief Background About Pompeii Pompeii was once a great and peaceful Roman city located in the South of Italy on the bay of Naples. It was a busy and thriving commercial area with a population of around 6,400 and 30,000. But all that turned into ashes when Mount Vesuvius erupted in 79 A.D.

In the first century, the people of Pompeii had no reason to suspect that the closest volcano in their vicinity would be the reason for their end because the volcano hadn’t erupted thousands of years before, and its landscape was as rich and abundant as it is now.

This rich landscape filled with nutritious volcanic soil provided the people of Pompeii with luscious fruits and vegetables. On top of that, its close distance to the sea allows its inhabitants to catch fresh seafood daily.

Furthermore, Pompeii was known to be egalitarian—a principle that everyone is equal in rights and opportunities. Even the poor inhabitants of the volcanic island were expected to have a healthy and filling diet.

The Unfolding Of The Catastrophic Geological Disaster

Mount Vesuvius may not look like it was erupting soon back then, but there were signs of this impending disaster. Around 14 to 15 years before the cataclysmic geological disaster, Pompeii had a great earthquake, which caused significant damage to most of its establishments.

Because of the lack of mechanisms back then, historians believe that the people of Pompeii were still recovering from the onslaught of the earthquake at the time of the eruption. Little did they know that these earthly tremors were already a precursor of what was yet to come.

Around August to October of 79 A.D., one of the most horrible geological disasters ever recorded occurred. Mount Vesuvius erupted, burying the entire city in volcanic ash and pumice. Almost 2000 years later, people rediscovered the site and turned it into a historical attraction.

5 Reasons Why Pompeii Should Be On Your Bucket List 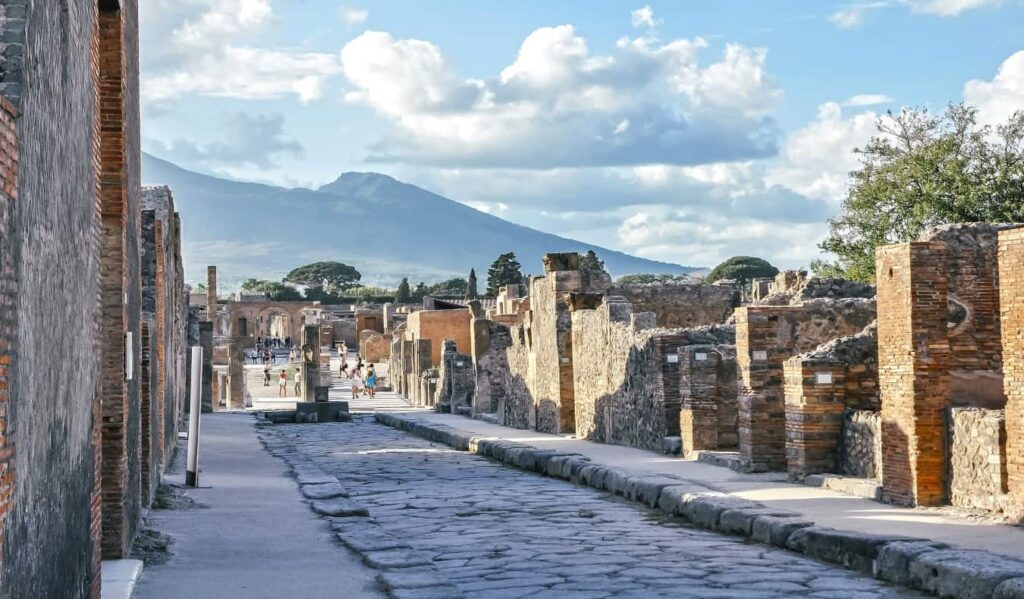 Despite Pompeii’s tragedy nearly 2000 years ago, there are many reasons why you should consider adding the buried city to your bucket list.

1. It’s A Perfect Place To Travel Back in Time

Pompeii won’t be dubbed as ‘the city frozen in time’ for nothing. Despite the volcanic ash and pumice stones that engulfed the entire city, you’ll see how it was perfectly preserved for almost 2000 years—like an ice cube that never melts.

Pompeii is a snapshot of the ancient past. Many establishments (e.g., temples) are left intact, especially the giant pillars that support these massive architectures. You can also see various ancient artifacts and skeletons of its previous inhabitants scattered around the buried site.

Although visiting historical museums is great, nothing beats the experience of strolling around the ancient ruins of the once-mighty city of Pompeii. It lets you step back in time and visualize the life its citizens had without problems.

2. It’s Close By A Friendly Neighbor

Pompeii wasn’t the only city buried in volcanic ash and rocks when Mount Vesuvius erupted millennia ago. The other one is a small town called Herculaneum.

Herculaneum is a small town near Pompeii at the foot of the volcano. Unlike the latter, Herculaneum is known for being an exclusive place popular with the Roman elites due to the number of luxurious villas discovered around the area.

Most of the architecture in Herculaneum remains intact and can be visited today. On top of that, this small town isn’t as busy as Pompeii. So, if you want a more relaxing historical trip to the past, checking out this place would be a better option.

3. It Houses A Collection Of Fine Artworks 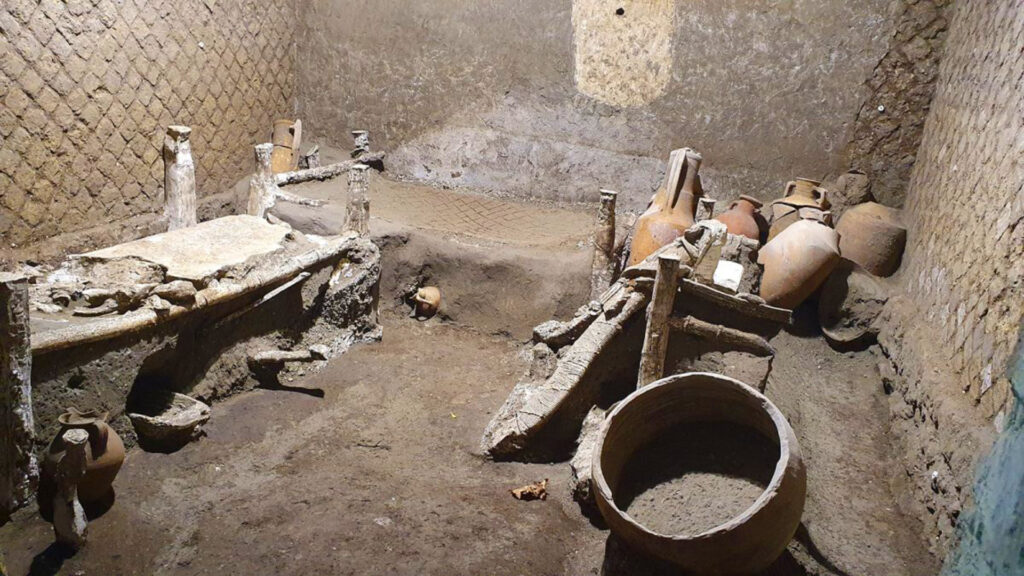 When visiting Pompeii, you’ll see a wide range of great artworks that perfectly illustrate what the life of its citizens may have been like back then. Some of which may include:

These ancient artworks were able to preserve their astonishing designs that showcase the culture and beliefs the people of Pompeii had 2000 years ago. Checking out Pompeii will help you understand how its inhabitants lived their lives before.

4. It’s Home To One Of The Oldest Roman Amphitheaters

Roman amphitheaters were one of the places ancient Romans used to hang out for entertainment purposes (e.g., chariot races and gladiator fights). Built in 70 B.C., the amphitheater in Pompeii is one of the oldest amphitheaters to be built using stone.

In addition, the stadium once held around 12,000 visitors, and tourists and locals are still welcome to sit back, visualize the past, and be allured by the impressive landmark. 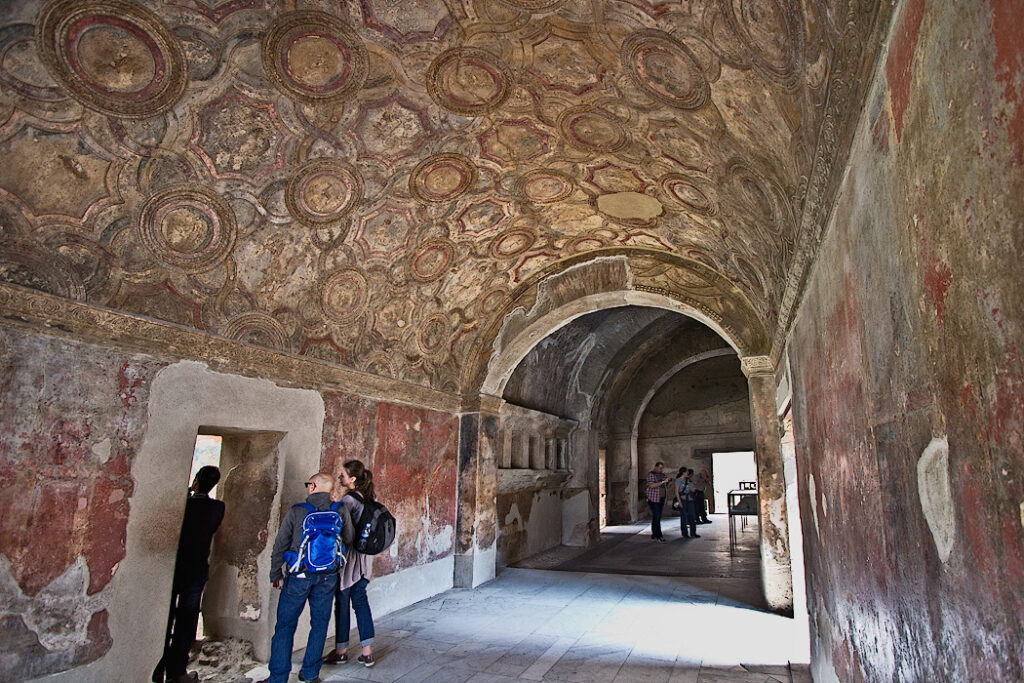 Back then, taking a bath was a public matter, a social gathering where ancient Romans met and had chitchats with their friends. In addition, it wasn’t common for Romans to have a private bathroom of their own unless they were the emperor or an official of the imperial court.

Many of these public bathhouses can be visited today. It’s filled with superior artworks that indicate how grandiose Pompeii was back then.

Pompeii is one of the world’s most famous historical ancient sites, thanks to the eruption of Mount Vesuvius in 79 A.D. Now, the city frozen in time is the second-most visited attraction in all of Italy. This makes Pompeii one of the best cities to visit in the world.