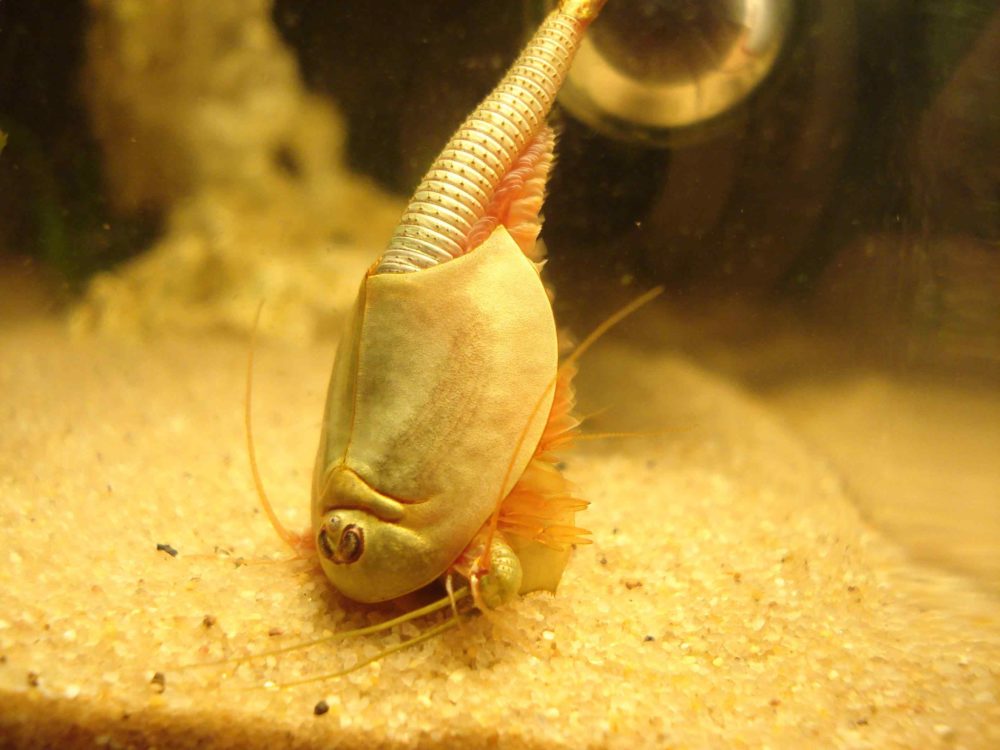 The Earth is an old planet and in geological terms, life started very recently. If the history of the Earth was compressed into a day with 12 am being the time of its formation, life started at about 3 am. The first life forms were merely aggregations of proteins that had some chemical reactions of their own. The first cellular organisms appeared at around 2 pm and sexual reproduction did not start until about 6 pm. Humans, the most recent life forms appeared at 11.58.43, only a few seconds ago in the geological time frame. Here is a list of the oldest animal species that are still found in the world.

You have never seen this tiny bacterium but it is the reason why life is possible on earth. The cyanobacterium is probably the first living organism to appear on earth and so is one of the oldest animal species. It is a photosynthesizing animal that lives in large colonies and produces oxygen as a by-product of its food production. Till today, it is one of the major contributors of oxygen in the world and sustains all other oxygen-breathing life forms.

The microorganism looks like a bacteria, however, they lack nucleus and organelles. But unlike other bacteria cyanobacteria contain chlorophyll a and conduct oxygenic photosynthesis. It is believed that the microorganism is 2.5 billion years old and hence listed under one of the oldest animal species in the world. Also, as per researchers. the early evolution of Earth’s oxygen-rich atmosphere is most likely due to cyanobacterial photosynthesis. The animal species is morphologically and physiologically diverse and mostly seen in terrestrial and aquatic environments. 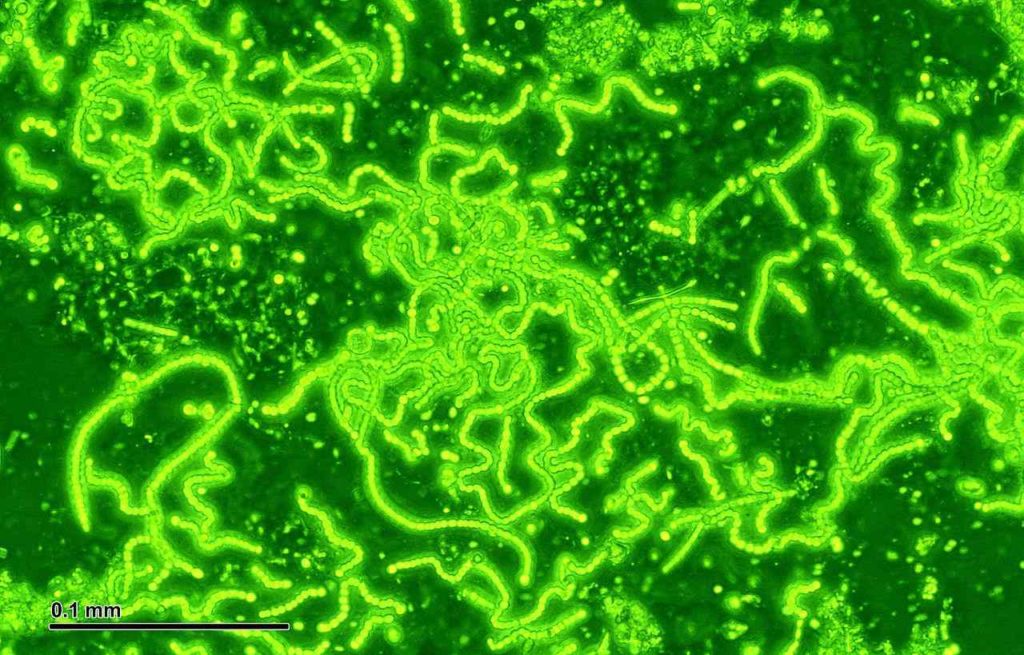 Sponges are some of the most primitive animals that look like plants. They are nothing more than an aggregation of cells and have no internal organs or body parts. They live in marine and freshwater and corals are some of the most well-known types of sponges. They evolved about 580 million years ago and even today support a majority of marine life. They reproduce by vegetative prorogation i.e. when a part of the sponge breaks off; it latches itself to another surface and grows into a new individual.

The species is not listed under coral or plant and comes under animal species tat niether have brain nor or central nervous system. It live on the ocean floor and atach themselves to the solid location under the water and they do not move around. Sponges can cotain 16,000 other animals inside of it and the largest sponges can be around 10 feet wide. Also, a new type of sponge identified evey year There are few sponges that are aproximately dated back to one billion years ago and hence listed under one of the oldest animal species in the world. 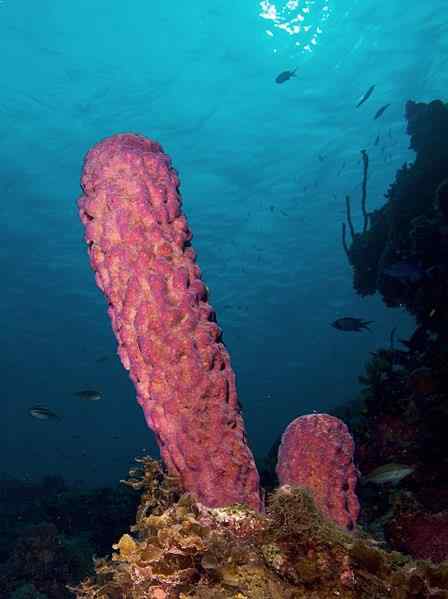 The jellyfish is the most primitive aquatic animal after the sponge and it evolved around 550 million years ago. This is one of the oldest animal species that does not have a brain or a nervous system and has primitive digestive and sensory organs. 90% of its body consists of water giving it a transparent, jelly-like appearance. The most poisonous animal in the world – the box jellyfish – also belong to this category of deadliest fishes and the sting of its tentacles can instantly kill a full-grown human and many larger animals. It is also known as one of the transparent animals on planet Earth.

The mouth of the jellyfish lies at the centre and from there it both eats and discards waste. Also, it serves another purpose of another purpose of water from its mouth and it helps the species to look forward. The species love to eat fish, shrimp, crabs and tiny plants. Also, jellyfish will serve good tasty food for sea turtles who like to eat them quite frequently. In Chinese culture, they are considered a delicacy and are also used in Chinese medicine. 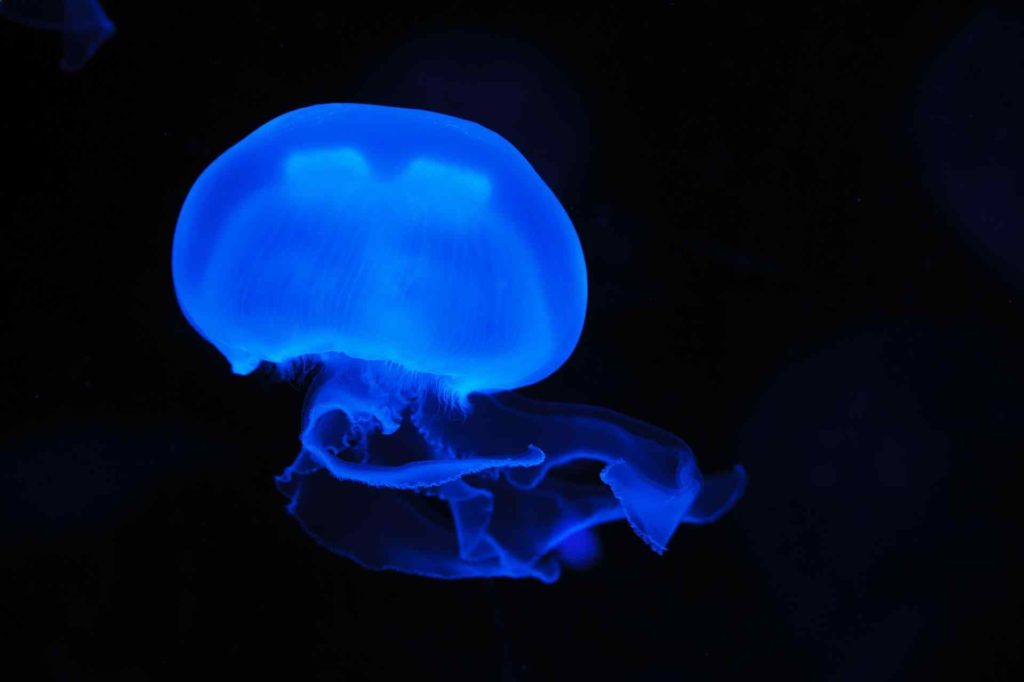 The Nautilus is one of the last members of a very old group of molluscs. It is estimated that this animal originated about 500 million years ago and is older than many dinosaur species. Thus, it is called a living fossil. This animal has a many-chambered shell on its body that it can recede into in case of danger. It also has more than 100 small tentacles near the opening of the shell that help it to catch prey and fend off attackers.

One of the oldest animal species can reach upto 8 to 10 inches in diameter and its shell is white to orange in colour and covered with brown stripes, howvever, the inner side of the shell is pearly. The animal species born with 4 chambers and expands the number of chambers throughout a lifetime. The adult species has more than 30 chambers and it is located in the newest and the largest chamber. It loves to eat hunts and eats crabs, shrimps and fish. 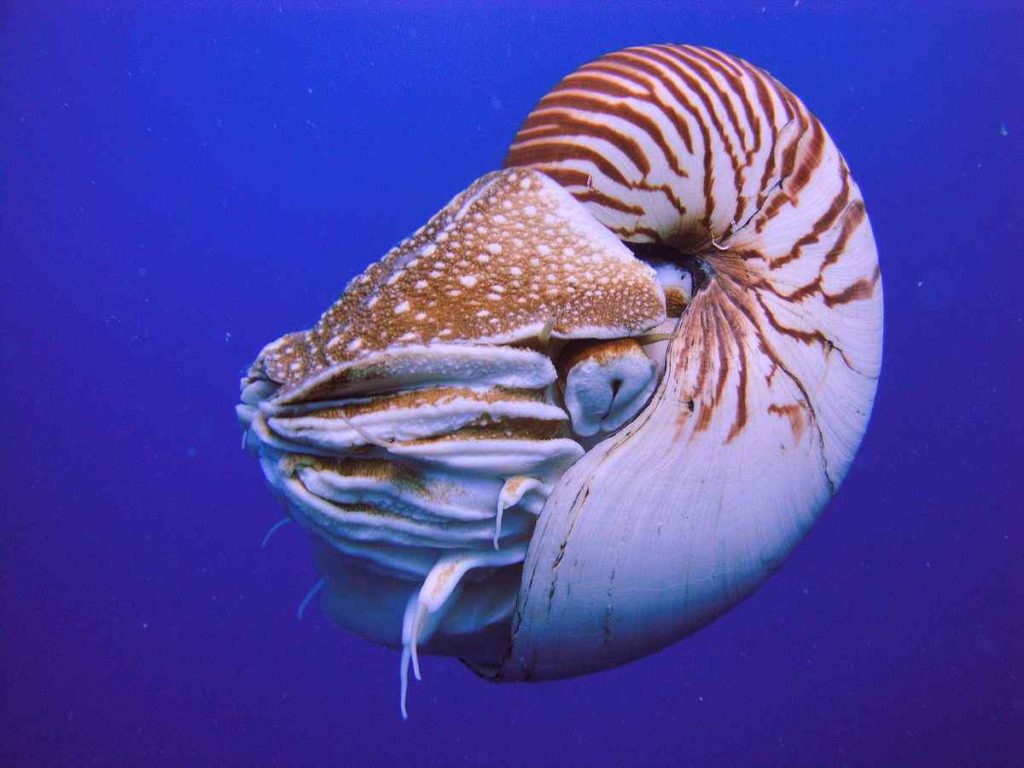 Like the Nautilus, this animal is known as a living fossil since it is one of the oldest animal species on earth and most of the animals in its family are now extinct. It is found in shallow oceans all over the world but is not very common. It has a hard outer shell called an exoskeleton instead of bones. It also has nine “eyes”, only two of which are actually used for sight with the other seven can only sense light. Using these eyes, they can also see ultraviolet rays that are outside the visible spectrum for humans.

The crab can reach upto 8 to 24 inches in length and weighs upto 2.2 to 9.9 pounds. It has a hard outer shell known as carapace which is shaped like a horseshoe. One of the oldest species has five pairs of legs and long tail where the first pair of legs is shaped like pincers and used for feeding. The species have a long and rigid tail and can be used as rubber and helps him to rotate animal from the back to the feet when it flips over. 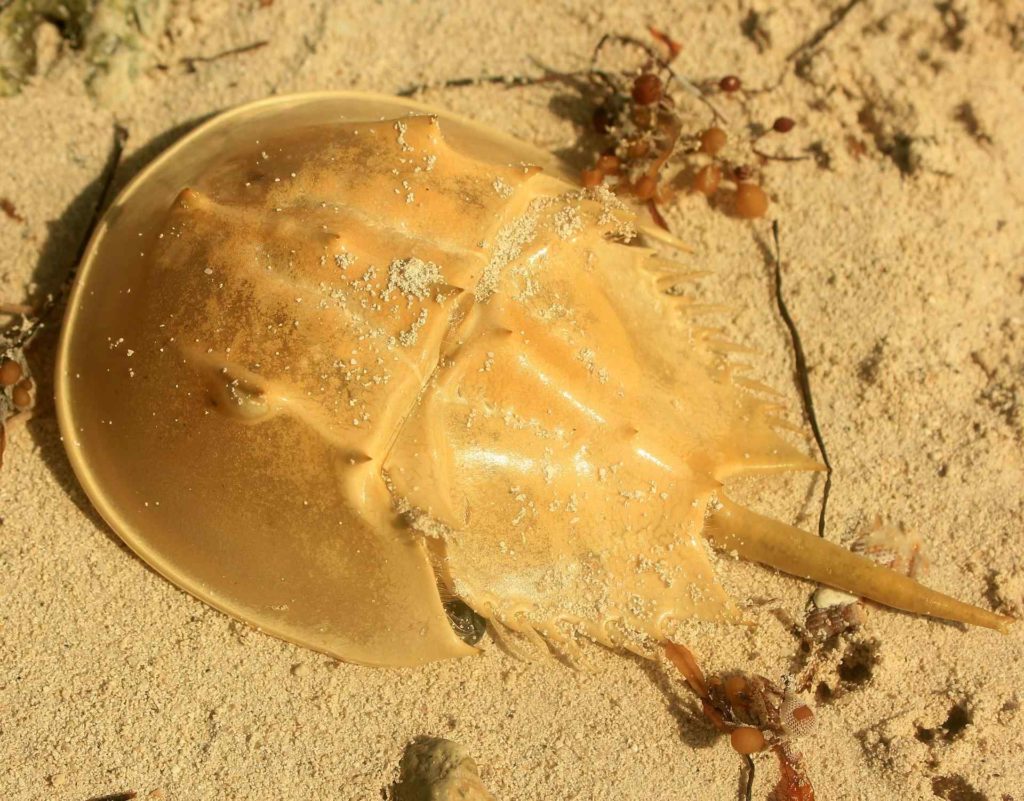 This ancient fish evolved more than 360 million years ago and is today one of the rarest and critically endangered fish in the world. For a very long time, it was thought to be extinct but in recent years, there have been sightings of this fish in the Indian Ocean. This fish lives very deep in the water and has been sighted at more than 2300 feet in depth. It has electrosensory organs that help it detect the presence of prey and the fin structure too is unique and is not found in any of the modern-day fish. The presence of the extra pair of lobe fins shows that it is one of the oldest animal species in the world. 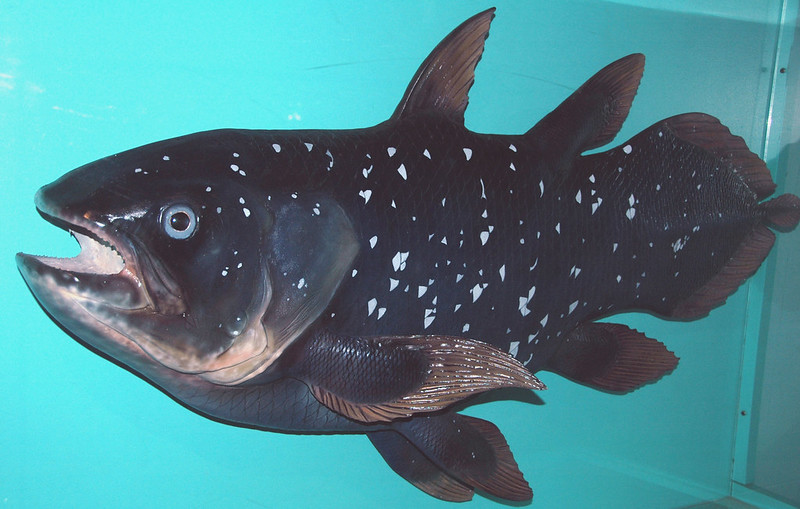 This large fish is found in North America and Eurasia and is one of the oldest animal species that belong to the family of bony fish. It is more than 5 feet in length and can weigh around 200 kilos. It lives in freshwater and lays a large number of eggs, but is critically endangered today since humans harvest these eggs for food. This fish evolved more than 200 million years ago and almost all the bony fish found today are decedents of this fish. 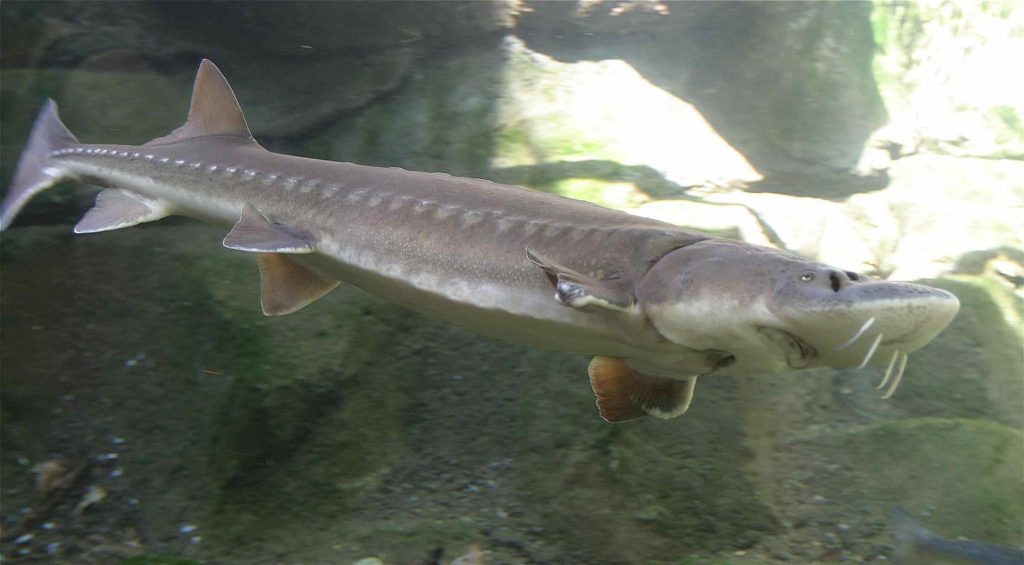 Like the sturgeon fish, the horseshoe shrimp too evolved about 200 million years ago, at the same time as dinosaurs. It is a very small animal with a length of about 2 to 4 millimetres. This is one of the oldest animals in the world and has the capacity to survive in even the harshest geological conditions. The eggs of the shrimp can lay dormant for several years until it finds the right conditions to hatch. The horseshoe shrimp was rediscovered by scientists in 1955 and the eggs were hatched in the laboratory to study this animal. 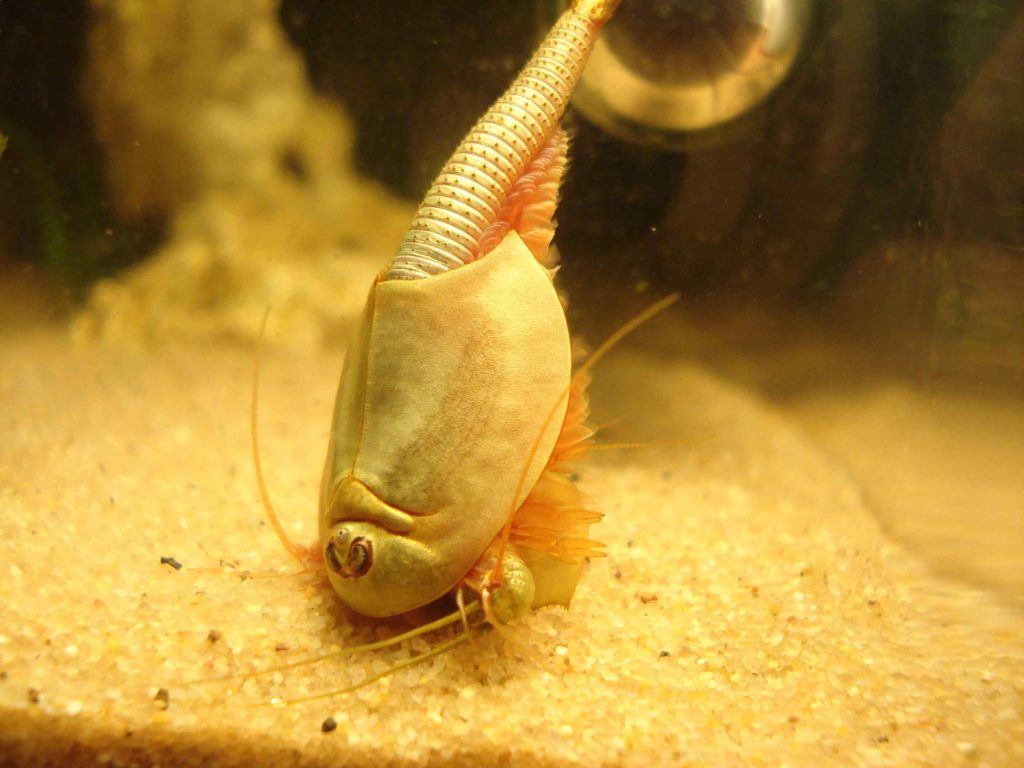 This frilled shark is one of the oldest living animals of the shark family and was discovered near Tokyo in 2007. It has been studied and dated to about 150 million years ago. This animal is an excellent predator and has more than 300 teeth arranged in several rows in its jaw. This animal is very rare today and lives deep in the ocean. Special chemical and physiological adaptations allow the shark to survive at depths not normally inhabited by sharks. The frilled shark is also threatened by pollution and global warming. Also, read about harmless shark species in the world. 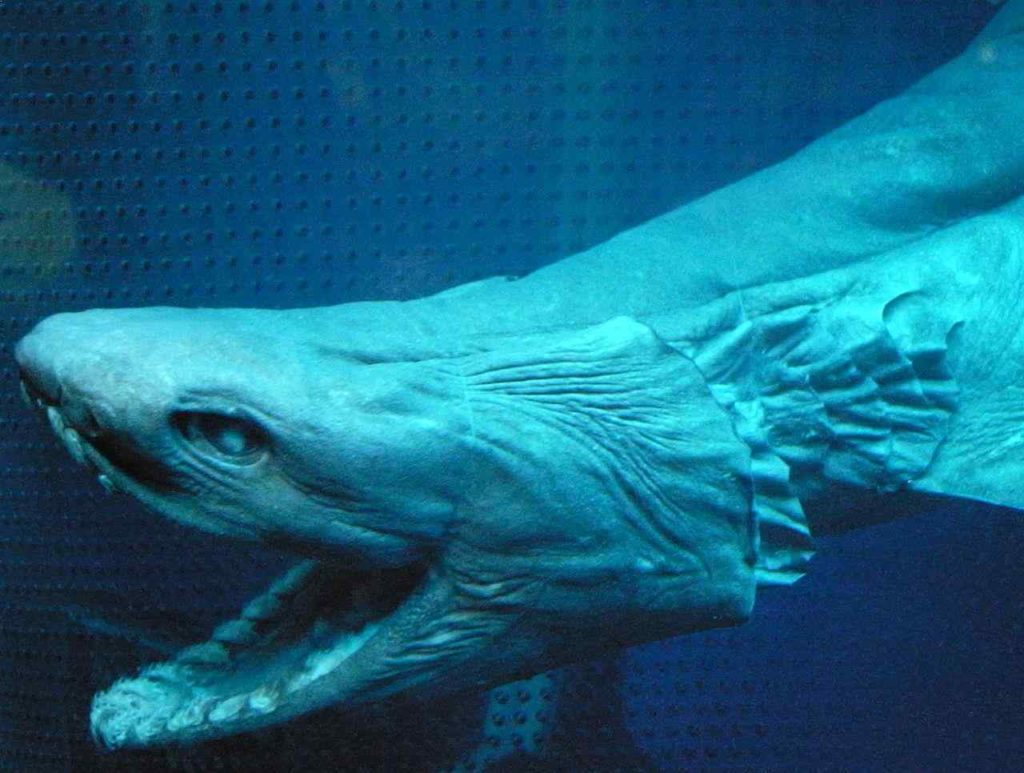 This rare Amazonian animal is a type of ant and is named the “Ant from Mars” since it looks and behaves in a totally different way as compared to any other ant species. It is one of the oldest animals on Earth and is estimated to have evolved about 120 million years ago. It lives in the soil and has no eyes, but has numerous hair-like projections on its body that help it sense vibration and pressure changes in the surrounding soil. This ant was recently discovered and has helped in the study of present-day ants. 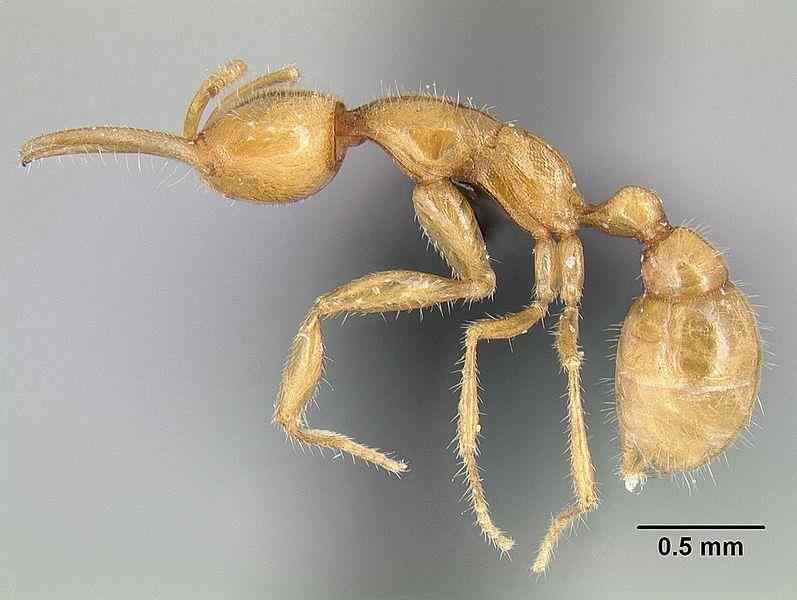 Such animals that are very old and most of their counterparts have died out long ago are called living fossils. This is because the origin of these animals can be dated back to the time of fossils, but they are surprisingly still surviving as a species. The study of these animals can offer us great insights into evolution and the survival strategies used by these animals that enabled them to live on while other similar animals went extinct.

These are the 10 oldest animal species in the world. Do post your comments.