Snakes invoke a sense of fear in humans because of the myth that all snakes are poisonous and their bites are always fatal. However, the majority one is non-venomous snakes and do not attack humans without provocation. Because of certain misconceptions, people are quite quick to kill snakes and this has resulted in a decline in the number of snakes particularly in semi-wooded areas that surround human habitation. Snakes are more often than not beneficial to humans as they keep the rodent population in check. Here is a list of the top 10 non-venomous snakes.

Non-Venomous Snakes In The World

The Anaconda is the largest snake in the world and it is non-venomous. It is found in South America and there are four types of anacondas of which the green anaconda is the largest. It can weigh up to 230 kilos and can be as long as 30 feet. Anacondas capture their prey by striking at it and then suffocating it to death by wrapping their body tightly around it. This is why the snake falls into the category of constrictors. Anacondas are large enough to kill humans although it is rare. They are capable of killing prey that is larger than them including wild pigs, caimans, and large fish. Green Anacondas comes under dangerous amazon rainforest animals.

Anaconda swallows one the whole species in one go when the prey dies. The nocturnal animal hunt mostly in the night. The mating season of the species is reserved as April and may where the mother gives birth to 20-40 young anacondas after six months. The anaconda babies are 2 feet long and they can live individual life from the day they are born. According to various data, they can eat upto 40 pounds of food per day. Currently, there are 4 types of Anaconda, howvever, they are large in size but scientists couldn’t find them easily when they hide in water. 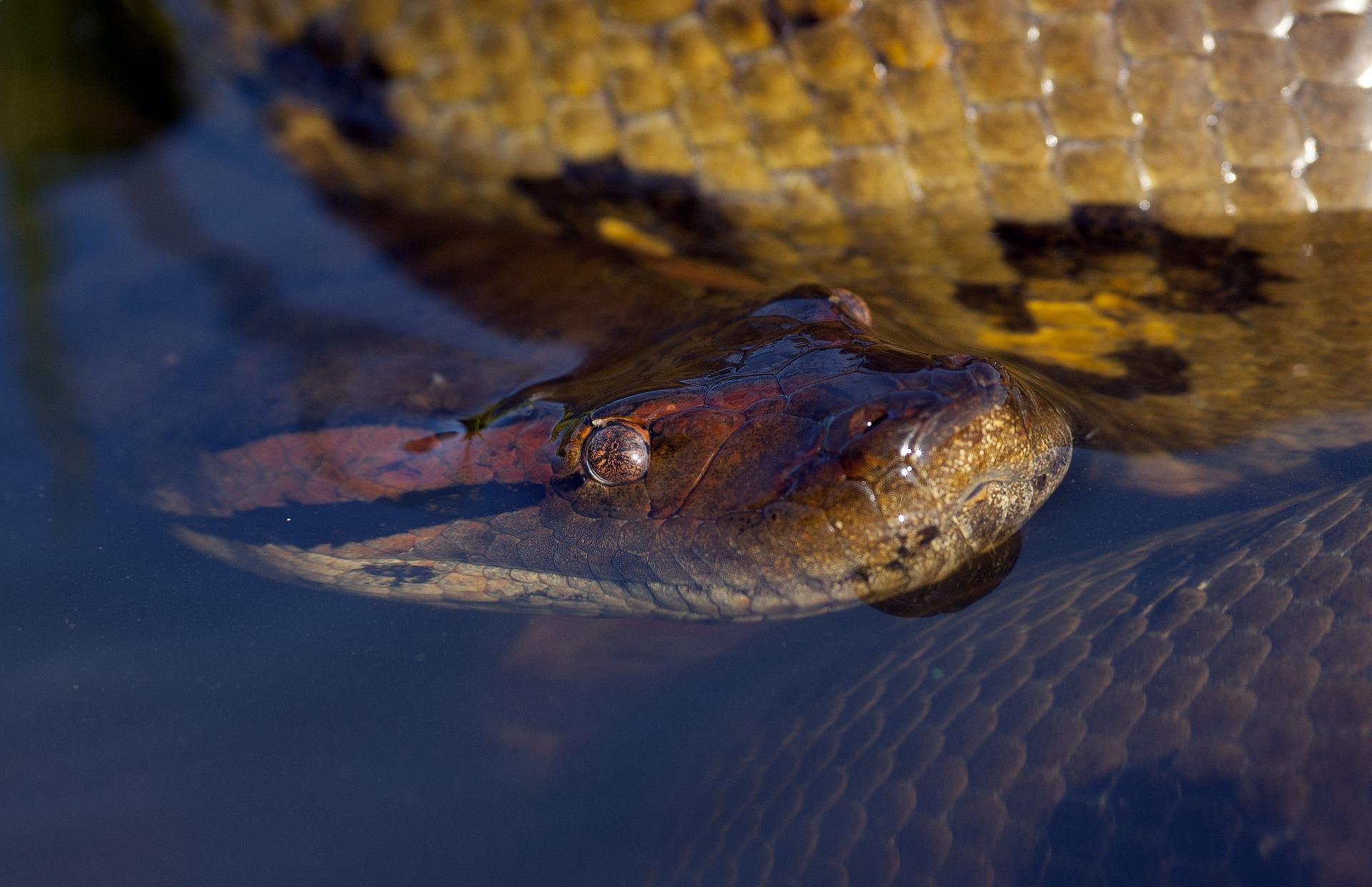 Like the anaconda, this snake is also a constructor which means it wraps its body tightly around the prey to suffocate it. Though it is smaller than an anaconda, it is still one of the largest snakes in the world. There are 26 different species of pythons which are found in Asia and Africa. They live in a variety of habitats like wetlands, deserts, and rainforests. Pythons are more likely to attack humans than anacondas. Despite the potential danger, pythons are kept as pets and ball python is one such popular species. Pythons have excellent camouflage which helps them approach prey stealthily and hide from predators. It also comes under the list of beautiful snakes in the world.

The female species of python lay approximately 12-36 eggs and it’s her responsibility to protect the eggs and keep them warm by coiling her body around them. As soon as the babies hatch, the mother leaves the nest and the young snakes need to take of themselves from the first day only. The cold-blooded animals can easily increase there body temperature by sunbathing. One of the longest known pythons named as Reticulated Python that can reach upto 30 feet in length and most of the python weight vary between 260-300 pounds. 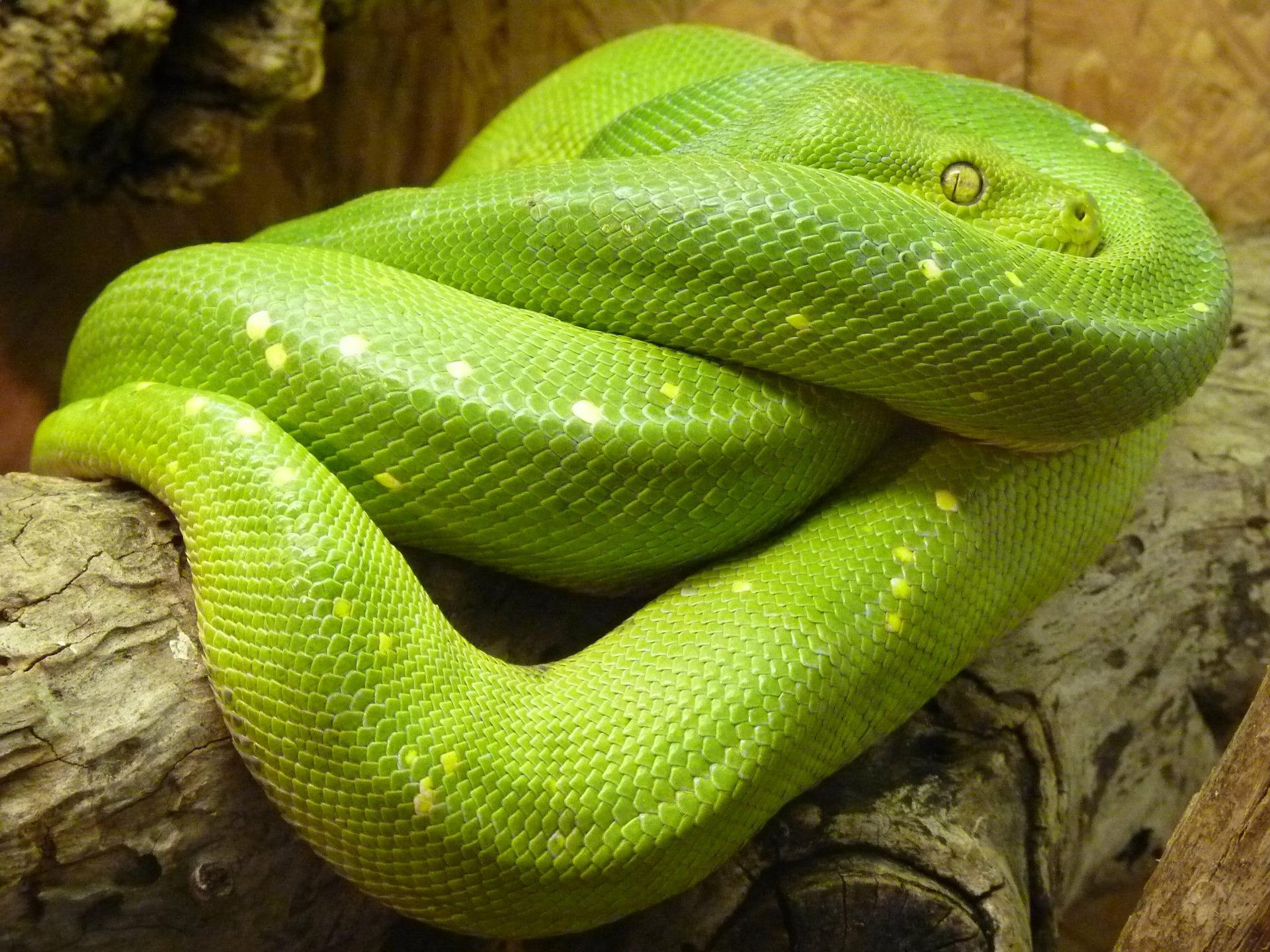 This non-venomous snake looks very similar to the poisonous Coral Snake because of the dark and light patches on its body. The light stripes may be red, yellow or orange making it a very distinct looking snake. These snakes are found in North and Central America in mountainous regions and eat earthworms, insects, and slugs. It is a small snake as compared to the first two on the list, but is remarkable nevertheless. You can also read about the few strongest animals in the world.

The name Milk snake did not signifies that they drink Milk. This is a wrong perception because milk snake is the name given by farmers who believed that these snake species can slither under a cow’s udders and drink their milk. Also, according to the scientists, the milk snake did not have the type of mouths required to suck milk from an udder. The smallest known milk snake is about 20 inches long and the largest one known to grow up to 60 inches long. To conclude, the largest milk snake can be 3 times longer than the shortest milk. 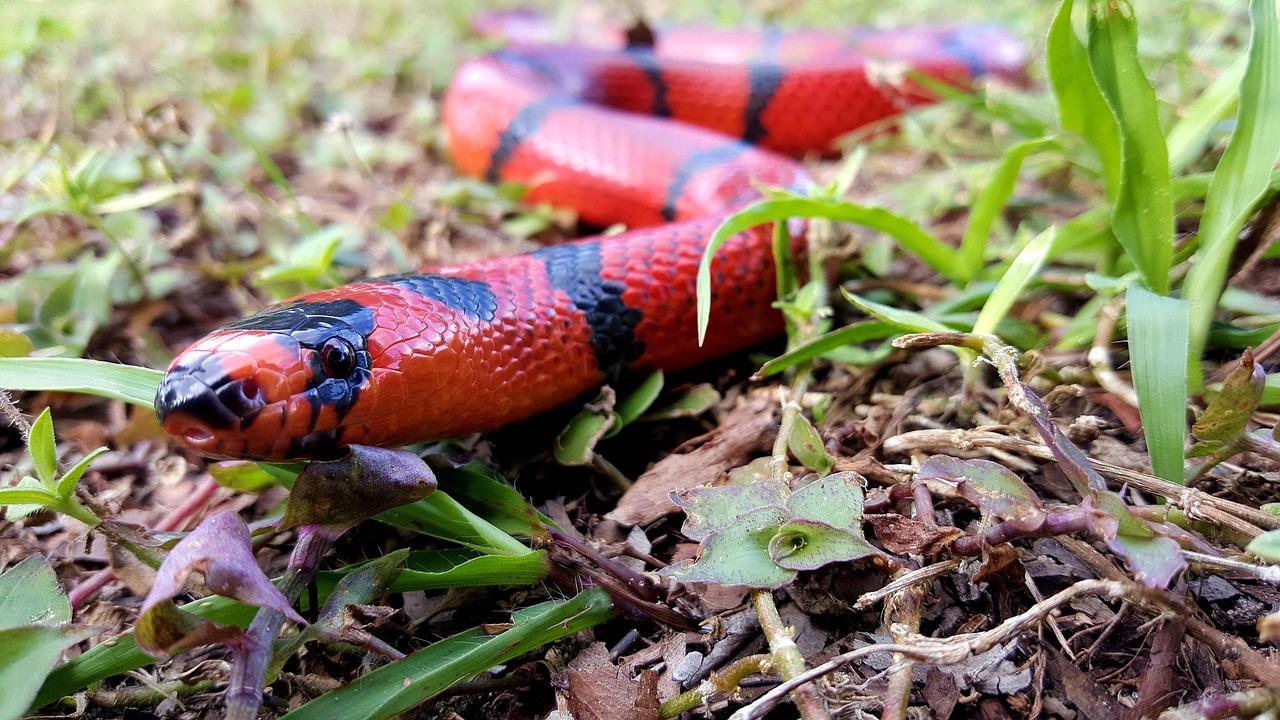 This is a very common snake in North America and is conspicuous because of its large size. It can grow up to 6 feet in length and lives in a variety of habitats like rocky mountains and wooded areas. When these snakes are attacked, they vibrate their tail in leaves which makes a sound similar to the rattlesnake. However, these snakes do not have a rattling tail. They mainly feed on small animals like lizards and rodents and save crops from damage by eating rats that could destroy the crops. It is also considered as one of the beautiful snakes in the world due to its color shades all over the body.

The black rat snake mates once a year and it is similar to all other species of the snakes. Both males and females release a unique smell that attracts both of the species to become prepared for the process and when the mating occurs males usually mates with multiple females. The female’s species give birth to approximately 3 snakes and as much as 80 snakes after being pregnant for three months. Like other snake species, the newborn snake is independent of the mother, however, in some cases mother feeds its offspring. 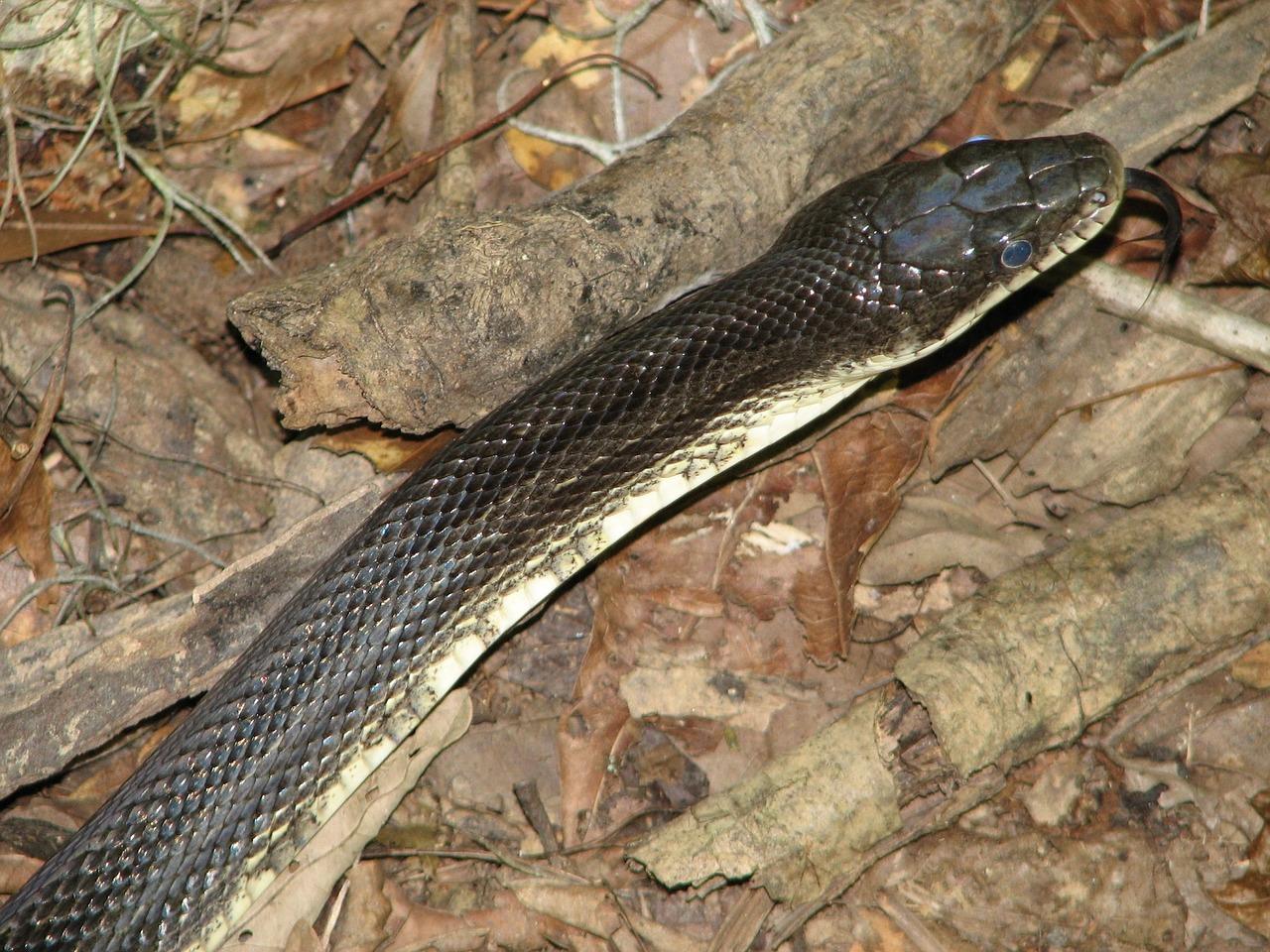 Like the Black Rat Snake, this non-venomous snake is found in parts of the United States, Canada, and Mexico. It is smaller in size, with a maximum recorded length of 72 inches and when it feels threatened; it vibrates its tail and hisses like the Black Rat Snake. Their body is patterned with dark and light brown patches. They live in sparsely wooded areas and farms and eat rodents thus protecting crops. Their diet mainly consists of rats, rabbits and small birds. Here, we have also listed a few beautiful Nocturnal Animals that are only active in the night.

The snake species has a strongly keeled scales that makes it skin rough as compared to other species. Also, dark vertical lines can be seen between the upper labial scales and extend diagonally rearward that starts from the eye to the posterior throat. The body color of the species varies with the ground color along with reddish or brownish blotches running in a pattern all across the body from the head to tail, however, there are other color variations such as white and albino have also been seen. The breeding season of the species in March and they lay eggs in the month of April to June. The female species lay dozens of eggs and leave the eggs unprotected to hatch on its own. The young snake species are greyish and they are approximately 20 to 46 cm long. 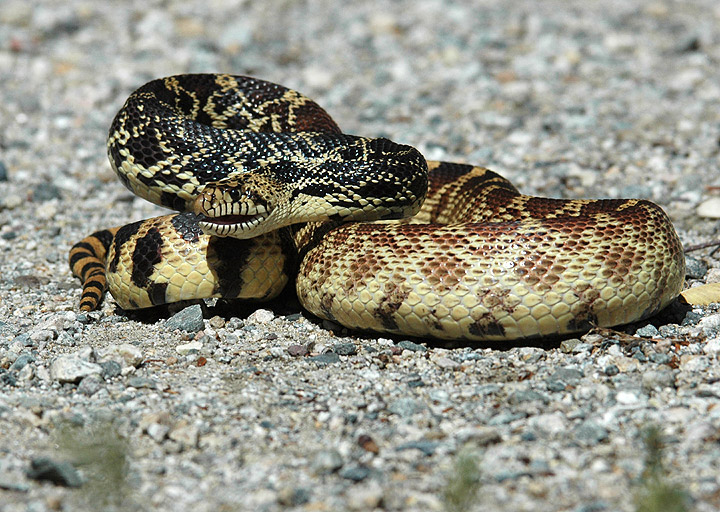 This snake is found in the United States and as the name suggests, is green in color. Its body shows a gradient in color with the back being bright green and the underside yellowish. This helps it to camouflage in both dry and wet vegetation. It is also known as the green grass snake because it inhabits open lands or areas with few trees. It looks similar to the green vine snake common in India because of its long body and green coloration. These snakes can grow up to 45 inches in length and feed on insects small animals like frogs and lizards. You can also read about a few apex predators in the world.

Females species of rough green snakes are larger than males. The species has keeled dorsal scales. The snake species is known for its large eyes when we compare it with the overall species. The average lifespan of the species is about 5 years in the wild and it can reach up to 8 years. The snakes are prey to many larger snakes like black racers or king snakes, birds, domestic cats, and even spiders. Also known as green whip snake-green summer snake, green tree snake, huckleberry snake, and even vine snake. Also, it shares other names such as grass snake or green grass snake with their American relative the smooth green snake. 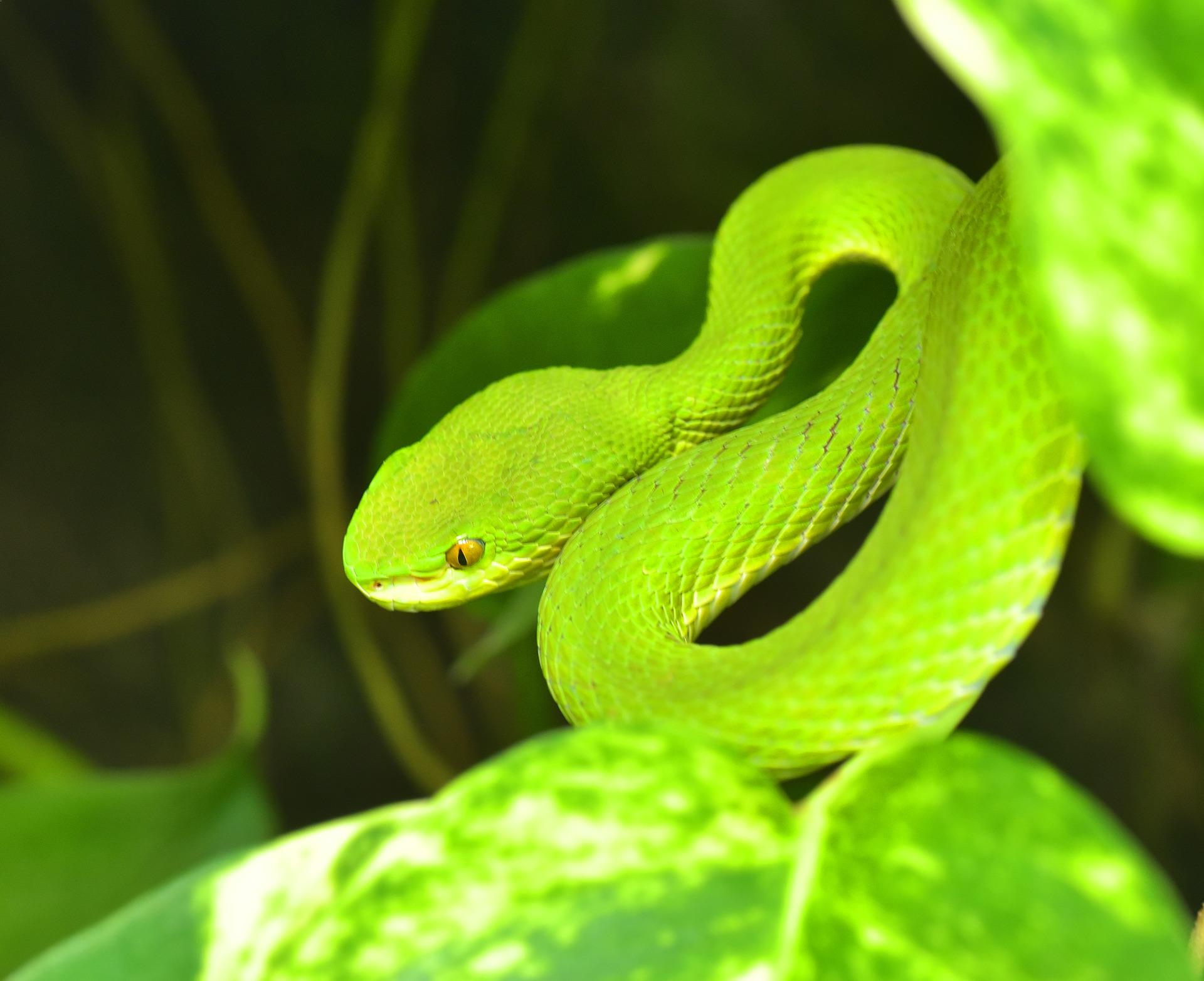 Emerald tree boas, also called green tree boas to look very similar to the green python due to its large body size and similar markings on the body including the bright green colour and white stripes. It lives mostly on tree branches and belongs to the constrictor category. They can be as long as 2 meters in length and have the longest fangs among non-venomous snakes, but unlike venomous snakes, they are not used to inject venom into the prey. the snakes move from one branch to another using their powerful body muscles and tail. It also comes under the world’s most beautiful snakes. 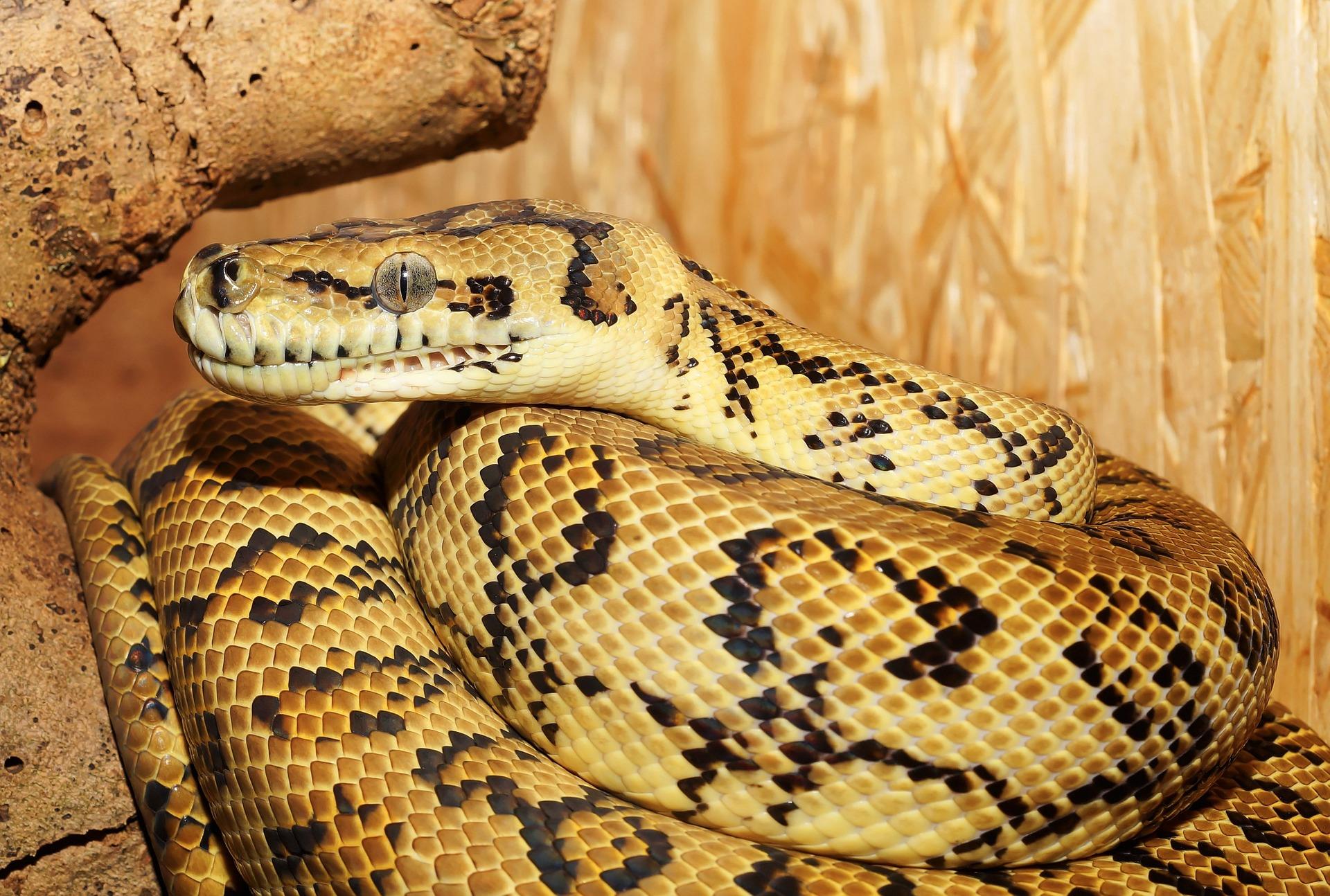 This snake too is endemic to North America and is commonly found in grasslands and deserts. It easily strikes when it feels threatened by predators and is known to attack humans though this attack is harmless. To deter predators, it secretes a foul-smelling substance from its glands and this prevents them from attacking giving it time to escape. They can grow up to 26 inches long and have vertical yellow, green, black and brown stripes along their body. It is also listed as one of the hibernating animals in the world. 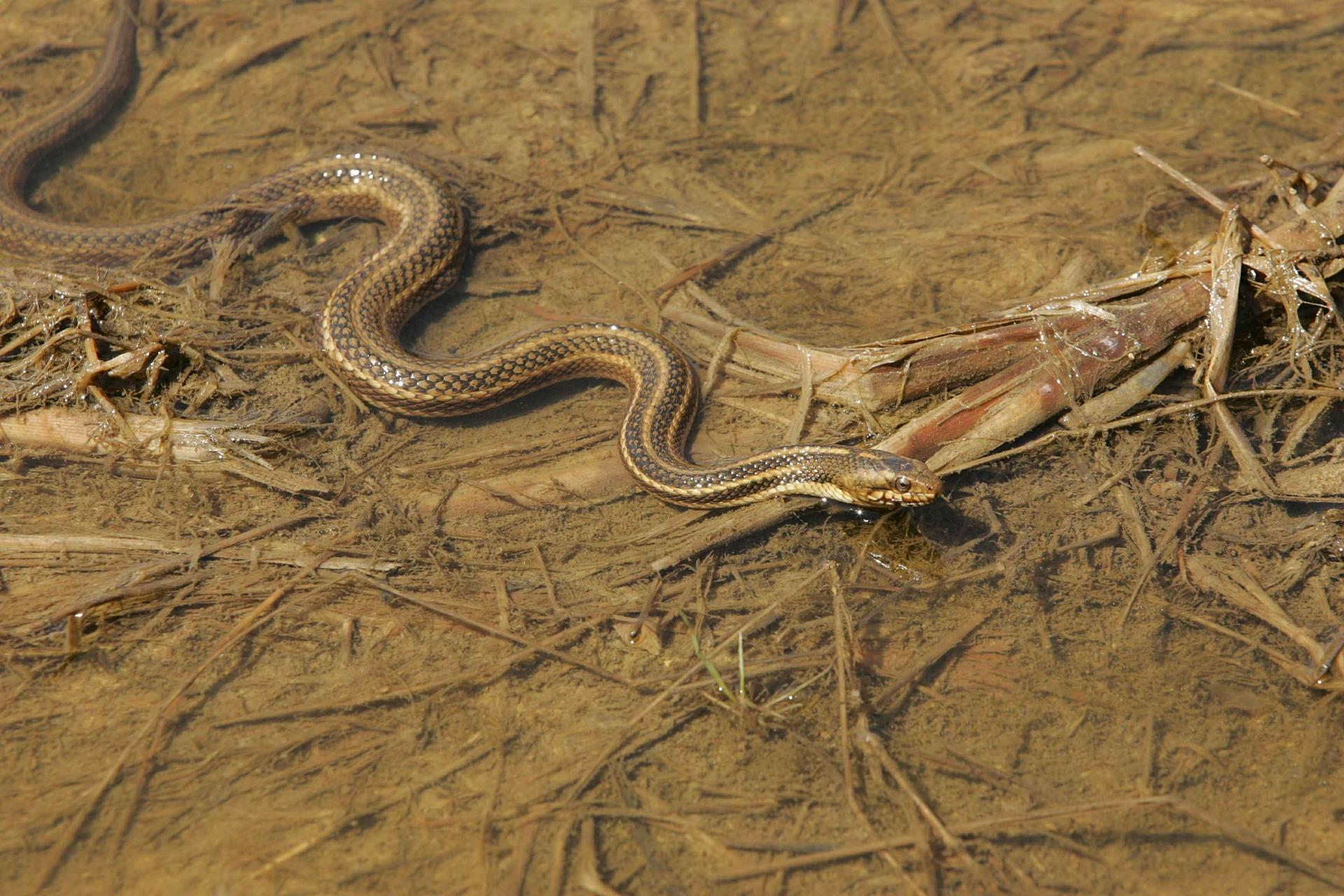 This snake is found commonly in Europe and is the largest non-venomous rat snake found on the continent. It is named after the four vertical stripes that run along the length of its body. These stripes may be yellowish or brown in colour and give them a very distinctive appearance. They are large snakes and can reach lengths of up to 1.8 meters. Their diet is mainly made up of rats, lizards and other small animals. Italy, Greece and Slovenia are the countries where it is most common to spot these snakes. This is also considered as one of the most beautiful snakes in the world due to its four lined shades on the body. 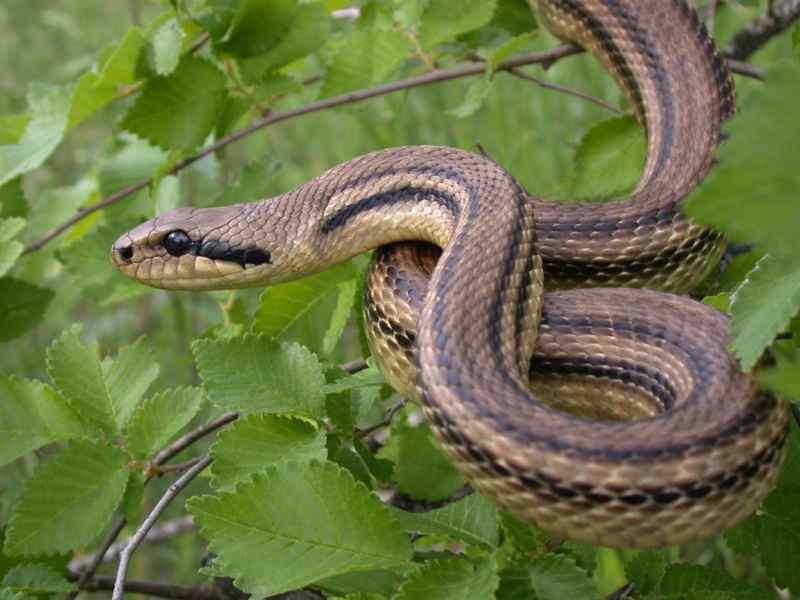 This snake is found in the United States and as the name suggests, it inhabits water bodies like lakes, ponds, marshes and wetlands. Because they look very similar to the venomous rattlesnakes, people commonly mistake the identity of the Northern Water Snake and kill it. Despite it being a non-venomous snake, it is very aggressive and commonly bites humans. This bite, however, is not harmful and causes only mild irritation. Like the Eastern Garter Snake, this snake too releases a foul-smelling substance from its body to warn predators and escape from them. Groups of these snakes can be found basking in the sun. 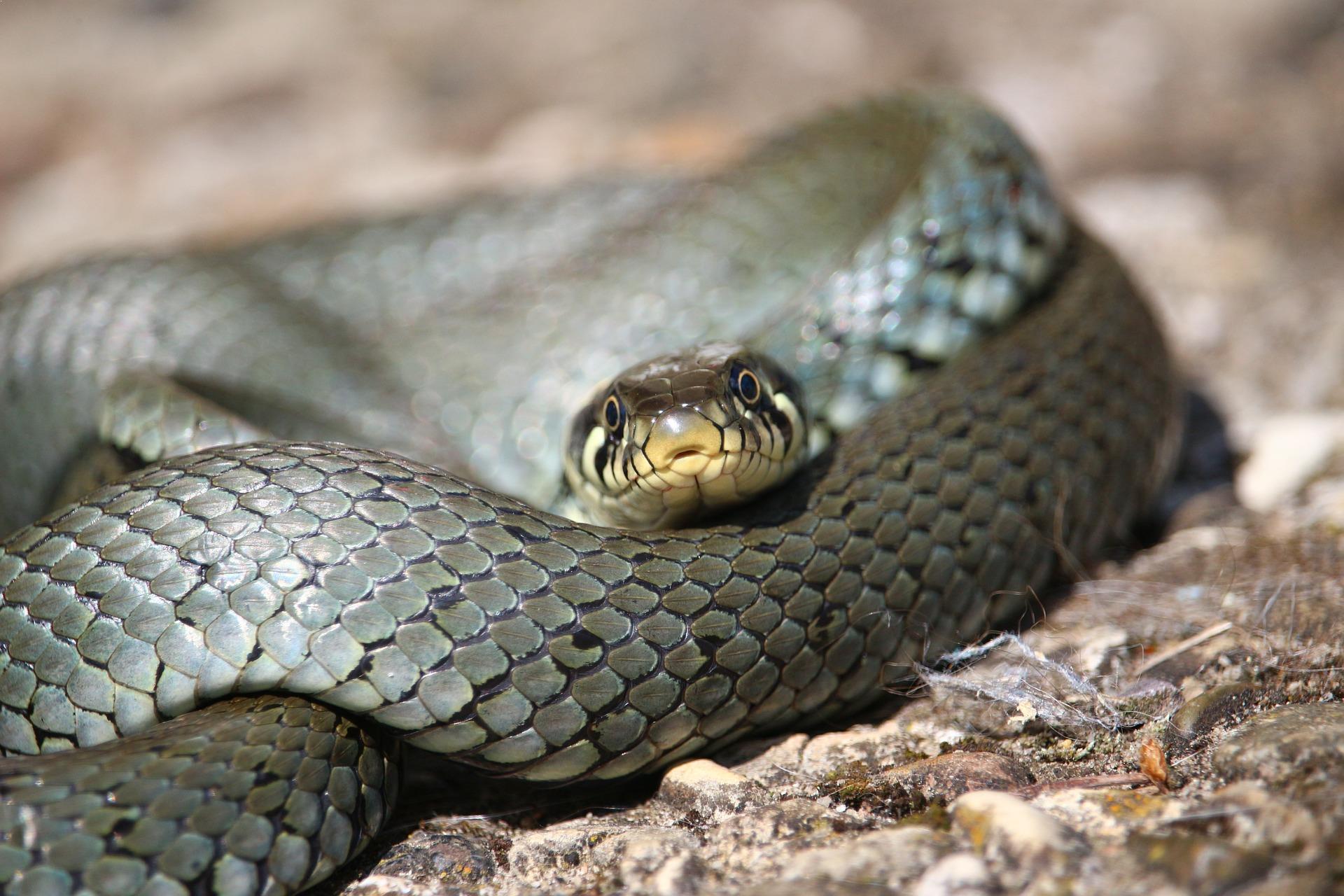 After reading this list, be sure to give snakes a second though the next time you see one. They are most often harmless to humans and event those snakes that are venomous do not unnecessarily attack human beings. Snakes strike humans only as a form of defence because they feel threatened by the presence. Calling professional snake rescuers or the nearby zoo is the safest option when you encounter a snake. Trained professionals know how to handle even the most poisonous snakes and can safely relocate them in the wild.

These are the non venomous snakes in the world. Do post your comments.