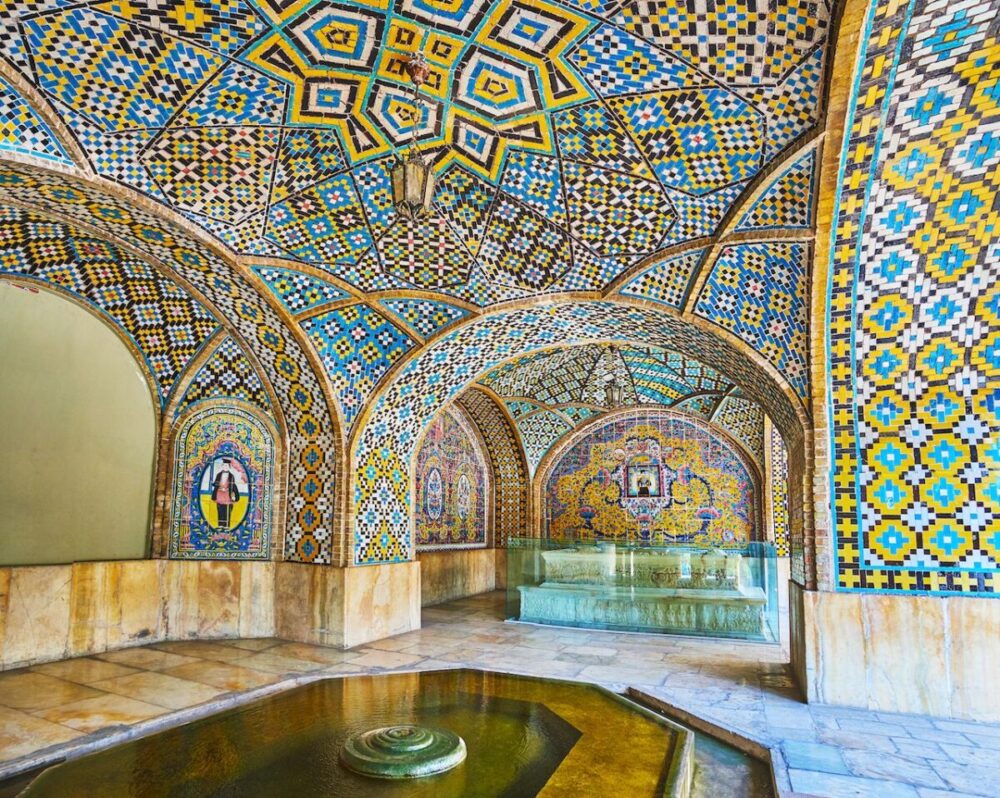 Since ancient times, mosaics have been used as one of the most prestigious decorative techniques. Even today, creating one requires a lot of skill and real artistic talent. The golden age of this beautiful technique was the era of the Byzantine empire, and those that were created then, are one of the most famous in the world. Still leaving people breathless with their size, aesthetics, and the skill used to create them.

They were mainly used as floor decoration in ancient Greece and Rome, but in addition to floors, they were also used as decoration for walls and ceilings. Although thematic and style have changed over time, depending on the period and location, the colorful tesserae of which they are composed ultimately had one goal, and that is to amaze everyone who sees them.

The most valuable ones are those made of gold and precious stones. The larger the surface, the more valuable they are considered to be. Such mosaics were primarily made for places of special importance and had a role to contribute to the splendor of a particular institution and to point out its power and significance, which is why churches, palaces, mausoleums, and other public buildings are mostly decorated in this way.

It took a real artist and quite an amount of time to create one. Today, they have managed to keep their splendor, and are available for purchase in tons of styles, like the ones found on Topmozaiek24.

Which are the most impressive mosaics around the world? Here’s a complete list. 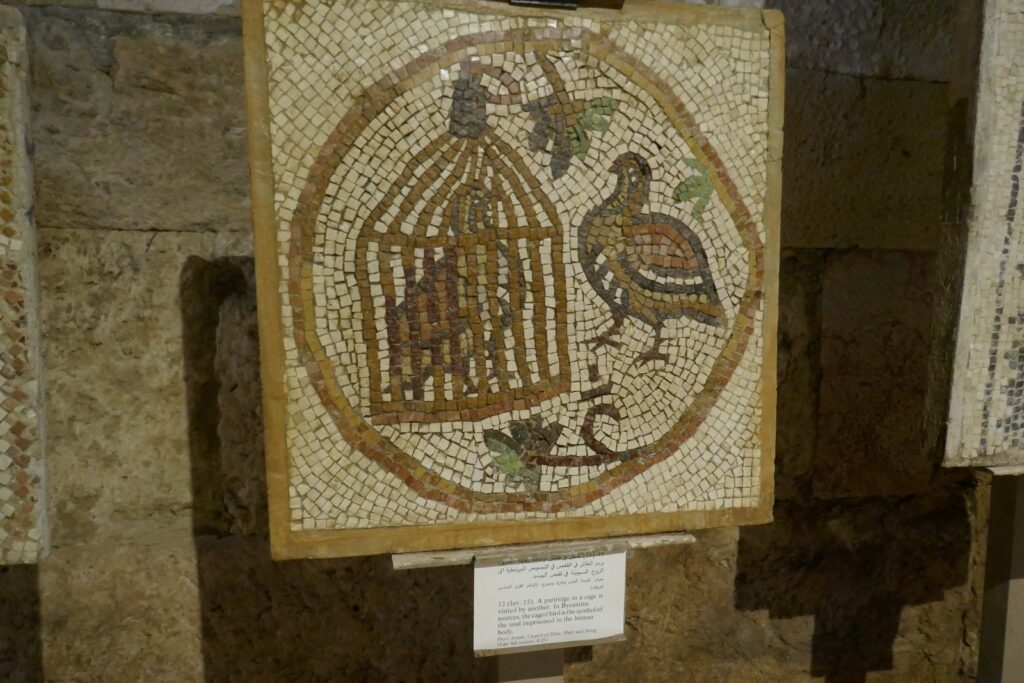 Located just a five-minute walk from the center of the city, this location is by far the most impressive relic of ancient Philadelphia. The theater is cut on the north side of the hill, which once served as a cemetery and has a similar design as the amphitheater in Jerash. It was built in such a way that it could accommodate more than 6,000 people. The structure also includes two small museums; The Museum of Popular Tradition, where traditional costumes, fine embroidery, antique jewelry, and mosaics are displayed, dating back from the 6th century. 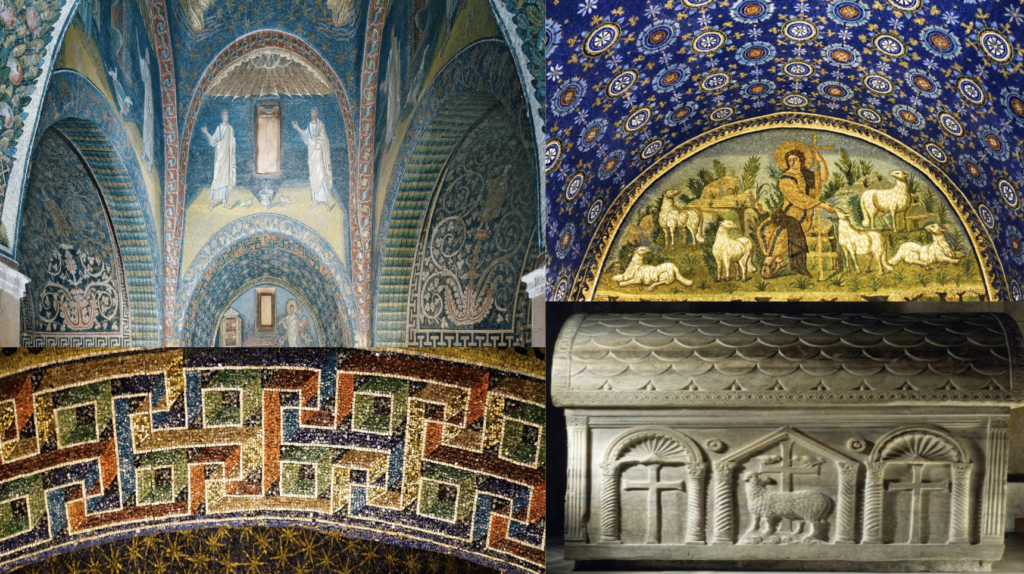 The final resting place of Galla Placidia. It is a mausoleum with potentially the most impressive example of early Christian mosaics. The blue symphony that forms the basis of this mosaic reveals a pure Byzantine influence on the style and manner of construction, and when you step in there, you will see several similar mosaics covering the niches, lunettes, and dome of the church.

What impresses most about these mosaics is not their thematic cycle and the story they tell, but the incredible skill and sense of aesthetics that can be noticed in every detail of the composition. 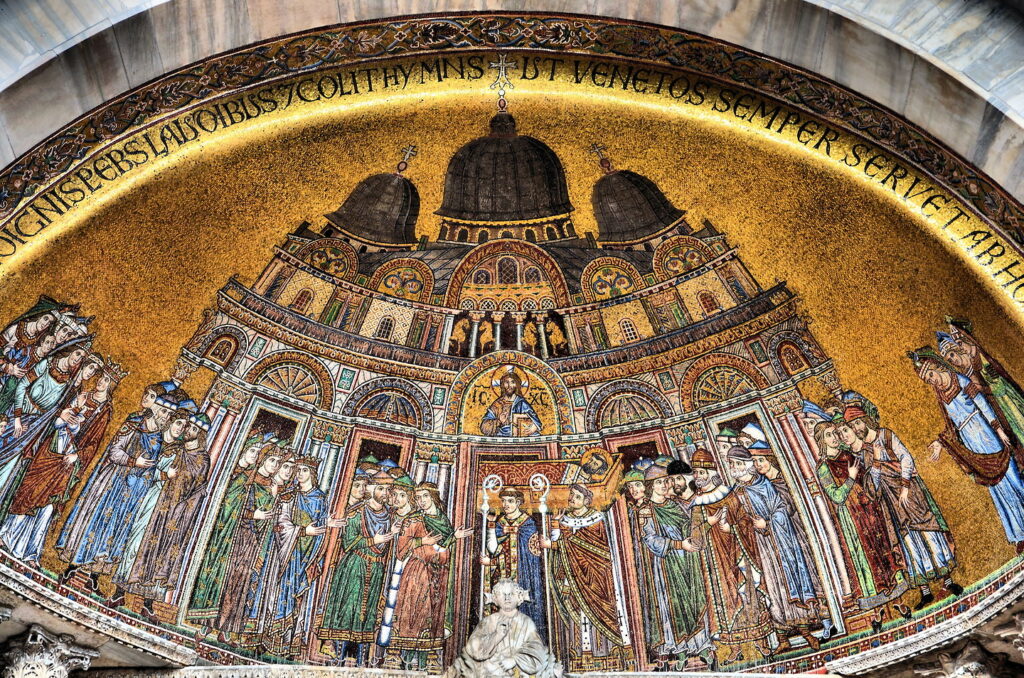 One of the most famous churches in the world is also one of the richest. Why? It is located in the heart of Venice and is the best example of what a successful fusion between East and West should look like, both in terms of architecture and artistic decoration. The walls and ceilings of this cathedral are mostly covered with mosaics on more than 8000 square meters. They are based entirely on golden tesserae, which again reveals a strong Byzantine influence, while the narratives illustrated on the decorations gradually developed during the 8 centuries of the cathedral’s existence. That’s a very long story to be told. 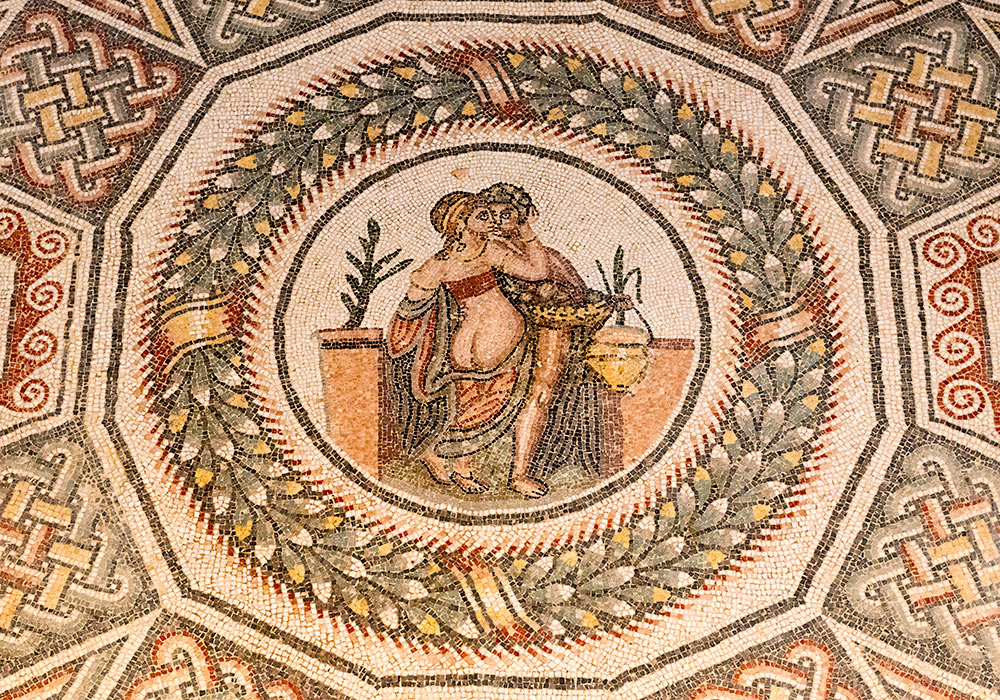 This luxury estate in the interior survived earthquakes, floods, fires, and the fall of the Roman Empire preserving almost intact an impressive collection of mosaics, at one of the most significant historical sites from the late Roman period. The building has more than 50 rooms and a luxurious bathroom complex which testifies to the wealth and power of the owner whose identity remains unknown. 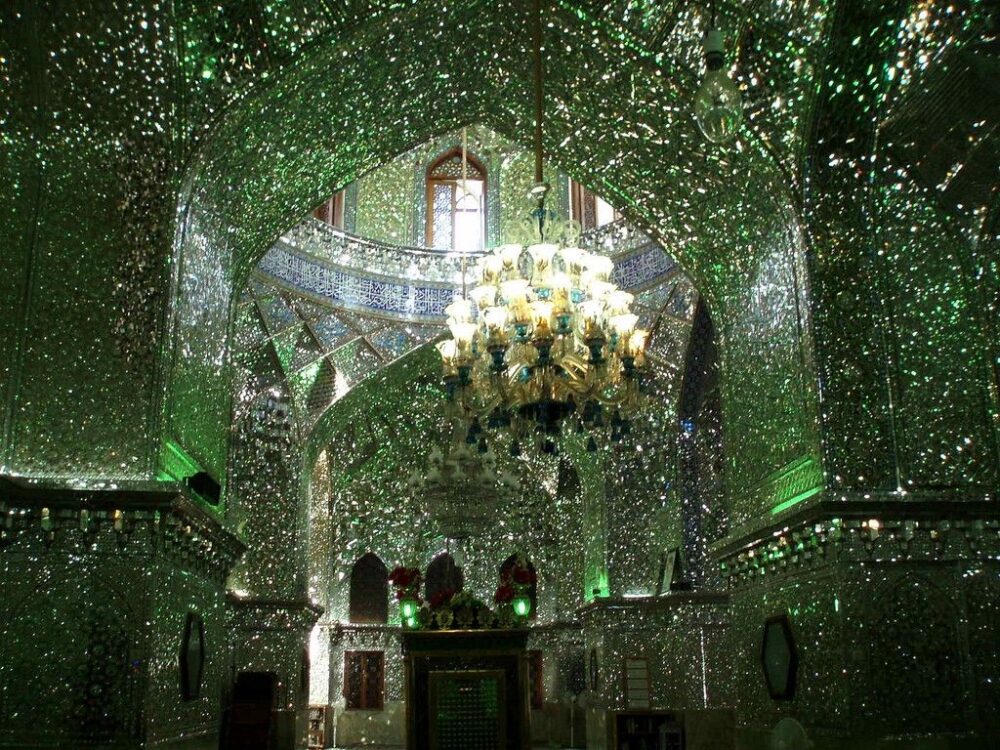 Both mausoleum and mosque in Shiraz is best known for its gleaming interior, which is why people also call it the Emerald Mosque. This 16th-century masterpiece has the whole interior covered with a glass mosaic that reflects light in all possible directions. The unique feeling you get when you step inside is that you have entered an unreal space that is not in this world. The glitter of the mosaics on the walls and niches of this mausoleum leaves an impression of sublimity and has an enlightening effect on everyone who visits it, no matter what their religion is. 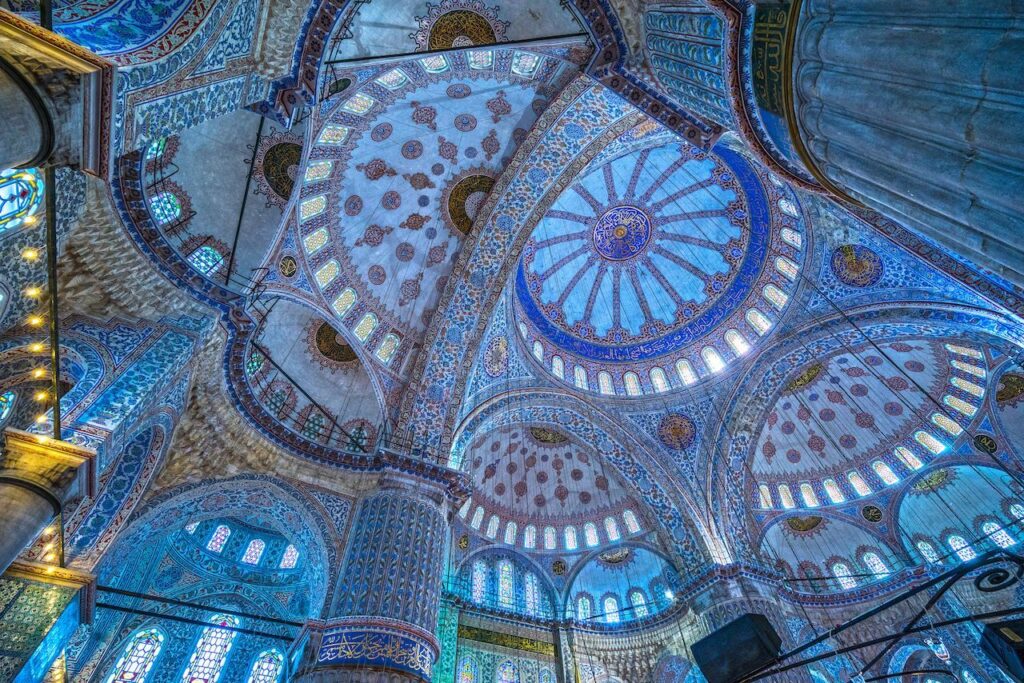 Built in the 17th century it is one of the most visited places in the world, for quite justified reasons. It is named after the interior, which mostly consists of light blue tiles with floral motifs that cover the walls and domes, and especially the massive pillars that hold the entire structure. 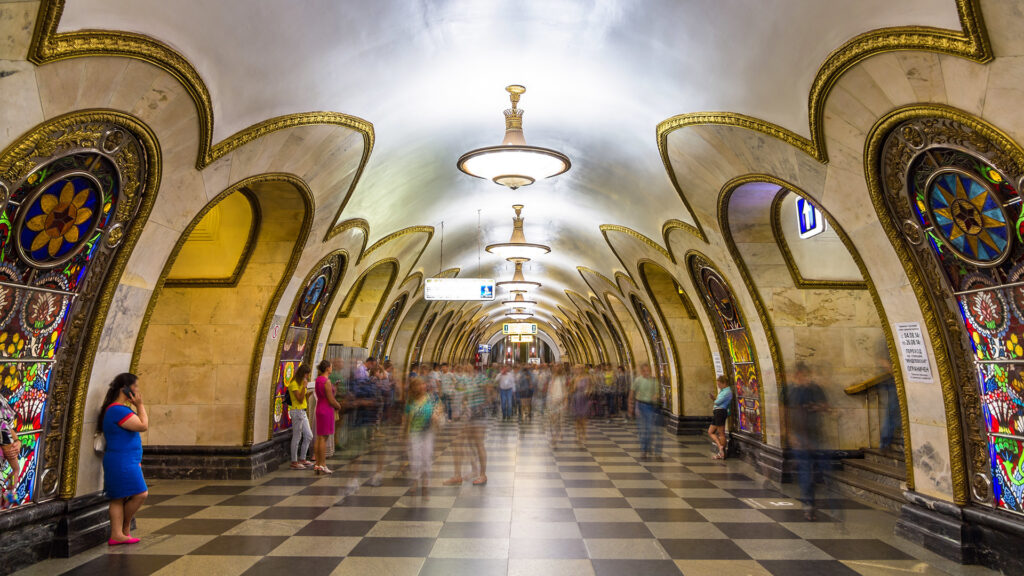 Known as the biggest underground museum. Taking a subway in Moscow is surely a unique experience, thanks to all the mosaics that adorn it. One of the most impressive ones is in the “Novoslobodskaya” station. This station is like a fairytale underwater world. On the side arches, there are glittering mosaics of stained glass. One interesting fact is that the stained-glass windows were made in Riga, of the same glass that was used for Catholic cathedrals, according to the designs of the Soviet artist Pavel Koryn. They show unusual plants and stars, as well as representatives of different professions: scientists, artists, musicians. This article wouldn’t be complete without mentioning Barcelona and its famous architect Antonio Gaudi. He left his marks all over the city, but the park is where the interesting mosaics are. They are a part of almost every architectural work and detail in this place. The park consists of about 3 km of roads and promenades, stairs, squares, terraces, and two gates. Almost every corner is decorated with mosaics.

After reading this list it is fair to say that we could not list all the most beautiful mosaics in the world even if we wanted to, but our intention was to single out at least some of the most impressive and most famous.