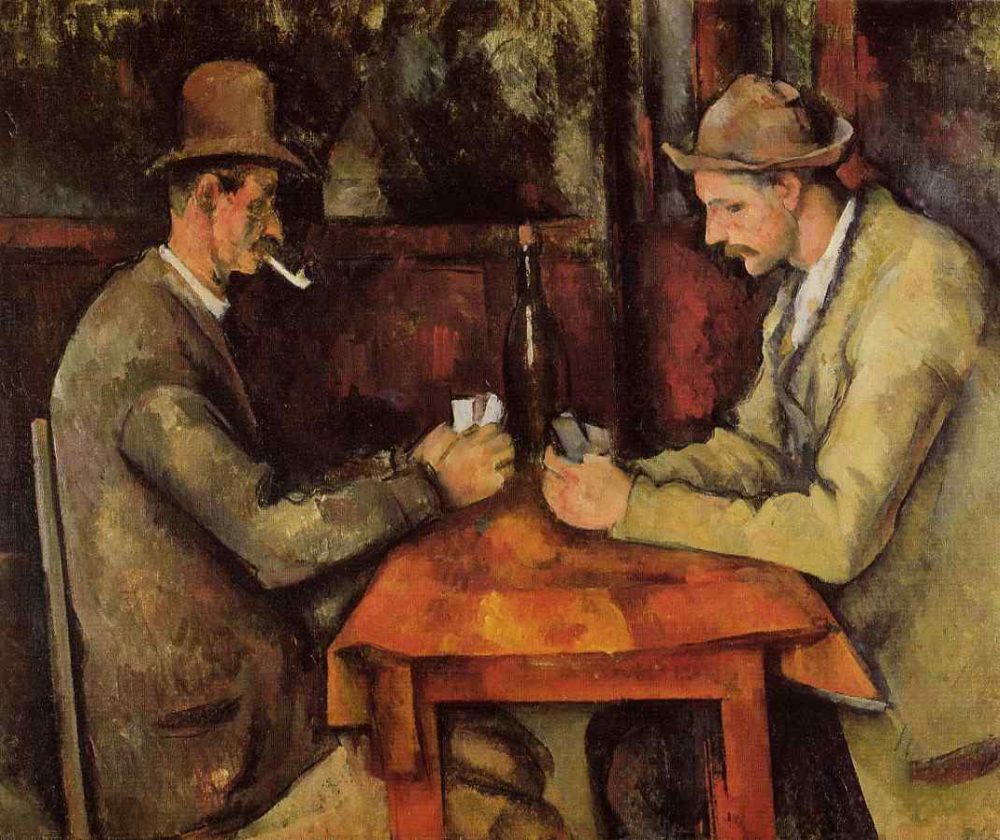 Among all the forms of art, painting is the most famous one. Thereby going by its popularity among the masses, paintings are usually the most expensive things to buy. Most original pieces, especially the ‘old master’ ones which refer to the paintings by the skilled painters before about the year 1800 by mostly European artists, are usually not up for sale and are most carefully preserved or held at museums. But then many paintings by world-renowned painters have been sold at extremely high prices at various auctions.

Though the value of art often feels like an impossible thing to measure, the auction businesses have shown us that everything has a price, even art. While the world economy languishes, paintings continue to command dizzying prices. So which paintings and artists command the prices? We have combed through the data to bring you the most expensive paintings (worth millions) of the world. Curated below is a list of the most expensive paintings ever sold as of the year 2018.

This piece of brilliant art by the world famous painter Leonardo da Vinci is believed to have been created circa 1490-1519. Initially presumed destroyed, this masterpiece by Leonardo was rediscovered in the year 2005. Considered the most expensive painting ever sold in the history of art, scholars are still on a constant debate regarding its attributes. This brilliant piece of art was sold to the Abu Dhabi Department of Culture and Tourism for USD 450.3 million by the Russian businessman and investor Dmitry Yevgenyevich Rybolovlev on the 15th of November, 2017. The auction house which conducted the auction event was Christie’s, New York.

This art is one of the masterpieces of the great Italian painter Leonardo Da Vinci dated to c.1500. The painting shows Jesus in Renaissance dress and holding a transparent crystal orb in his left hand while giving a benediction with his right hand raised and two fingers extended. This depicts his role as the Saviour of the world (hence the name Salvator Mundi) and master of cosmos is a walnut oil type of painting. It is an expensive oil so you can predict its worth! It was sold at the auction by Christie’s in New York to Prince Badr bin Abdullah bin Mohammed Al Farhan on behalf of Abu Dhabi Culture and Tourism. 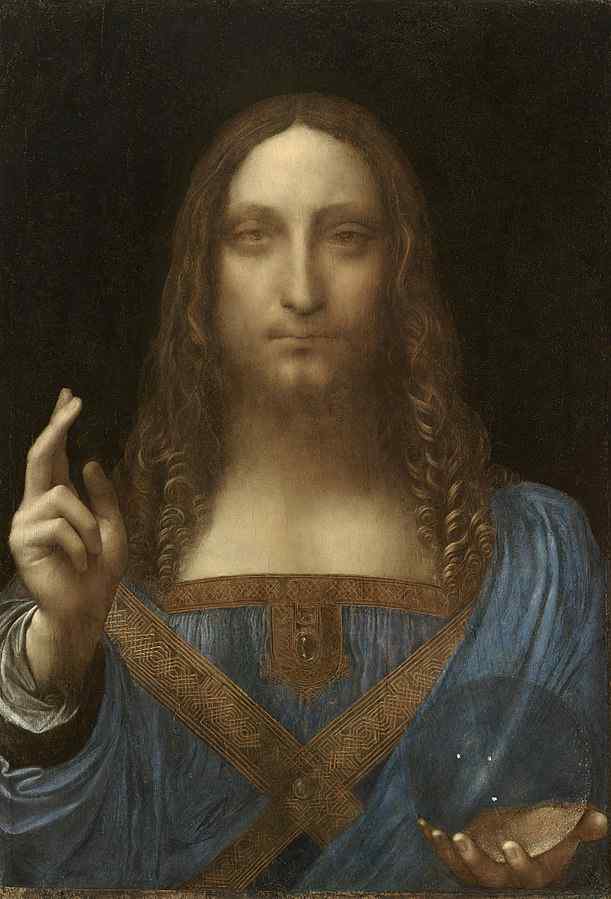 Interchange also is known as Interchanged is the work of a Dutch American painter Willen de Kooning completed in 1955. He was an abstract expressionist painter and this painting is also one of his abstract art. It is an oil on canvas type of painting.

Related: 10 Most Famous Works Of Art

Paul Cézanne’s The Card Players ranks third among the most expensive paintings ever sold as it was sold in April 2011 by George Embiricos to the Royal Family of Qatar in a private sale for a whopping amount of USD 254 million, although there is a dispute regarding the exact price at which the painting was actually sold. This exceptional painting featuring two stony-faced card players was completed by Cezanne during his final years around the early 1890s.

The Card Players is a series of five oil paintings by French painter Paul Cezanne. These were painted during the end days of his life i.e. the late 1890s. The five masterpieces vary in size, a number of players and the setting in which the play takes place. The first two paintings contain three players playing while the last three contains two players. Each scene depicts the men concentrating on nothing else except the cards/game. They are quiet with cards being their only mode of communication. 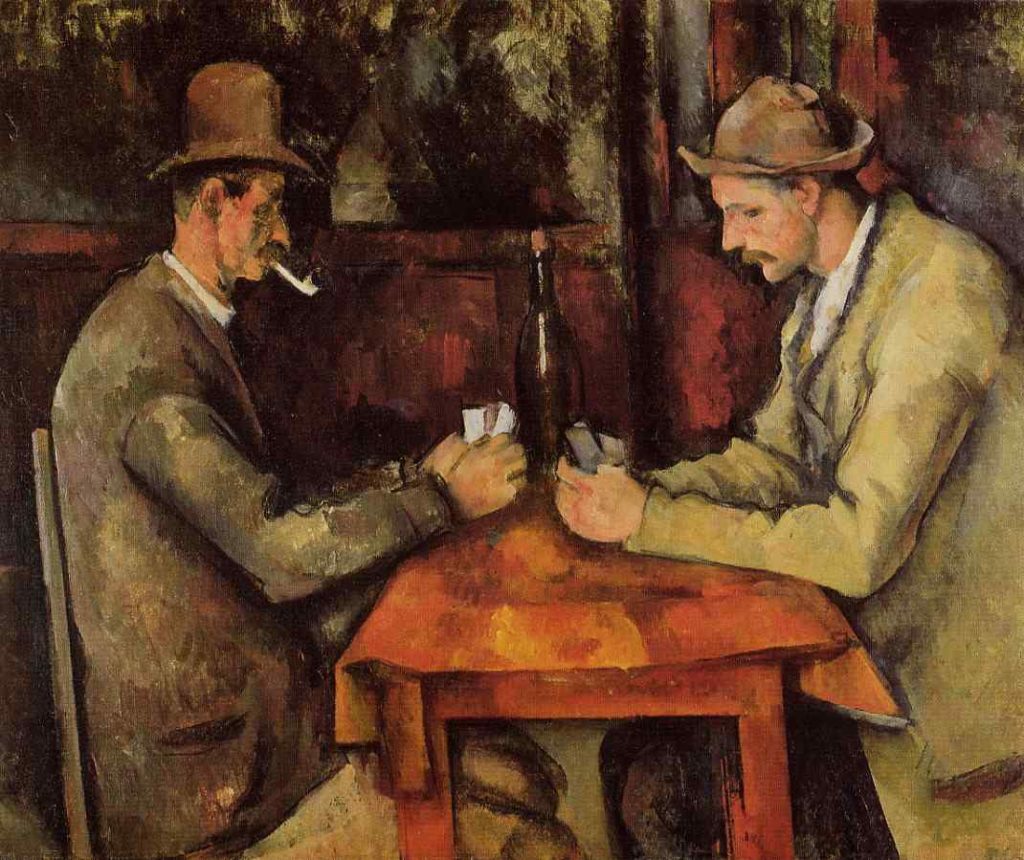 The Nafea Faa Ipoipo also known as When Will You Marry?, by the famous painter, Paul Gauguin features two native Tahiti women, one wearing a traditional Tahitian dress while the other wearing a mission dress with a very serious expression on her face. This extraordinarily beautiful painting was sold privately by the heirs of Rudolf Staechelin to Sheikha Al-Mayassa bint Hamad Al-Thani of the Royal Family of Qatar, in February 2015 for about USD 210 million. This painting which was on exhibition at the Foundation Beyeler, Riehen, until the 28th of June, 2015, has rightfully earned its place among the most expensive paintings ever sold.

Gauguin travelled to Tahiti in 1891 in hope of finding a place where he could create a pure, primitive art rather than the primitivist faux works being turned out by painters in France at that time. But he didn’t find a thing he hoped for as Tahiti had been colonised in the 18th century and two-thirds of the island had been dead due to the disease brought by the Europeans.

The painting includes two women settled on the ground. According to Richard Field, the traditionally dressed woman who is sitting while bending a little has a white tiare behind her ears which depicts that she is seeking a husband. Behind her is the second figure in a high-necked Western-style dress sitting erectly. Field thought her gestures come from the Buddhist art. Her face is painted with distinctive features and is the centre of the painting. At the bottom is the inscription Nafea Faa Ipoipa. 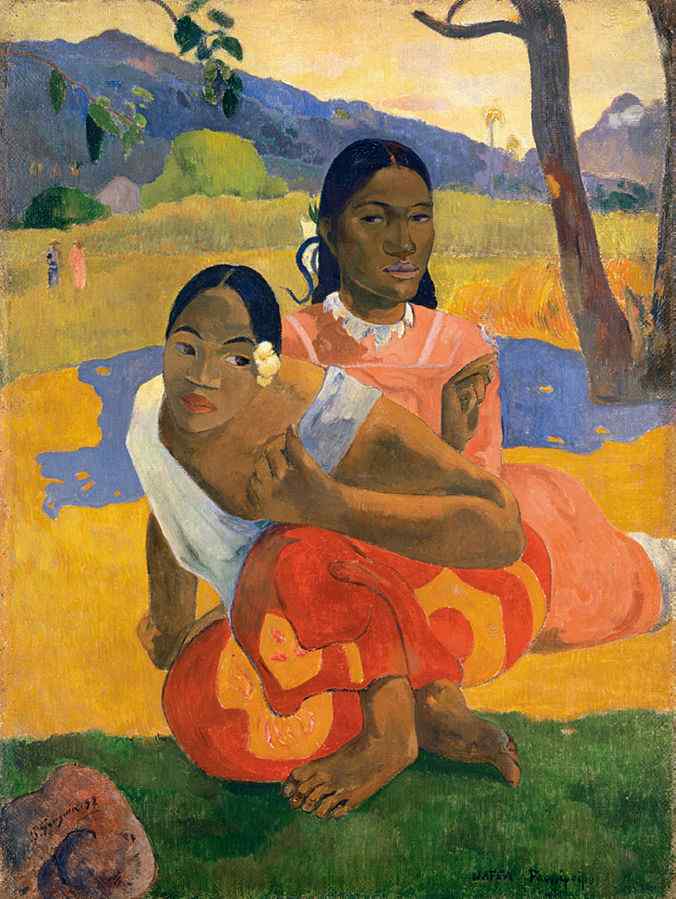 Pollock’s masterpiece Number 17A was bought by Kenneth C. Griffin from the David Geffen Foundation along with Kooning’s Interchange at a private sale for a total of about USD 500 million; the Pollock being bought at around USD 200 million. Famous as an American painter and widely known for his contributions to the abstract expressionist movement, Pollock complete this masterpiece of his in the year 1948.

It is an abstract painting art by an American painter Jackson Pollock. He is well known for his unique style of drip painting. He was so committed in his work that once he started painting, he completely forgot the presence of others in the room. In some of his works, it is even possible to see his footprints.
He hasn’t given any name to this painting, it is simply numbered. That’s because at one point he chose to leave the interpretation of his works completely to the viewers giving them the freedom to see whatever they feel in his paintings.

Labelled as one of the most expensive paintings ever sold in the history of art, Mark Rothko’s No. 6 (Violet, Green and Red) was sold to the Russian businessman and investor Dmitry Yevgenyevich Rybolovlev by Cherise Moueix at a private sale via Yves Bouvier, a Swiss businessman and art dealer. This painting, evidently an overpaid one, was sold at USD 186 million, in August 2014.

The dealer Bouvier is alleged to fraud the clients by selling the artworks at the prices much higher than the original value of it. This painting is included in the works implicated in the infamous Bouvier affair. The original value of this painting was €80 million. Later the buyer who is a Russian businessman and investor, Dmitry Yevgenyevich Rybolovlev has accused the art dealer of misleading him about the price of this painting and is, therefore, a subject legal dispute.

Related: Top 10 Most Famous Paintings in the World

Klimt’s Wasserschlagen II also known as Water Serpents II was initially seized by the Nazis during World War II. Through this classical work of his, Kilmt, possibly tried to portray the female body in an erotic way through the underwater beings without the fear of censorship. Completed circa 1904-1907, Klimt’s Wasserschlagen II was sold by Yves Bouvier in a private sale to the Russian businessman and investor Dmitry Yevgenyevich Rybolovlev in the year 2013. It was sold at a whopping amount of USD 183.8 million which made the painting bag a place for itself among the most expensive paintings ever sold in the history of art.

Wasserchlagen is German for water snakes/serpents. It is an oil on canvas type of painting by an Austrian painter Gustav Klimt. His primary subject for the paintings was the female body and a frank eroticism. Water serpent II displays women in an erotic yet beautiful state. This painting displays four women lying in a watery enclosure. Two of them are fully nude having elongated hair and covered in sea reminiscent as ornaments. Small circles and stars depict barnacles and starfish whereas the green stroke depicts seaweed. On the far right two other women can be perceived with merely their heads resting in an odd position.

The Pendant portraits of Maerten Soolmans and Oopjen Coppit are a pair of wedding portraits by Rembrandt van Rijn which was formerly owned by the wealthy Jewish Rothschild Family until they were jointly owned by the Louvre Museum and the Rijksmuseum, in September 2015. Both the full-length portraits were jointly bought from Baron Eric de Rothschild of the Rothschild Family, by the Louvre Museum and the Rijksmuseum at a private sale for USD 180.8 million.

This a pair of pendant portrait paintings by a Dutch draughtsman, painter, and printmaker Rembrandt. These paintings are full-length wedding portraits of Maerten Soolmans and Oopjen Cooper. The two objects are dressed as befits a pair of wealthy Amsterdam newlyweds. Unlike many 17th-century portrait pairs, these two have always hung side by side whether in Louvre museum (Paris) or Rijksmuseum (Amsterdam). 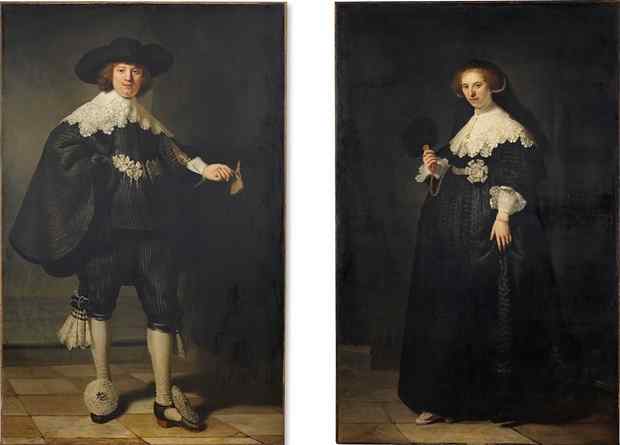 Les Femmes d’Algers also known as the Women of Algiers is a series of 15 painting and numerous drawings by Picasso. This entire series was initially bought by the Ganz Family from the Galerie Louise Leiris in Paris, France for USD 2 million in June 1956. The Final painting in the series, the Version ‘O’, was then later bought by the famous British art dealer Libby Howie for a certain anonymous Saudi Arabian art-collector living in London for USD 31.9 million, in November 1997. It was again auctioned at Christie’s New York for a second time and was sold to the former Qatari prime minister, Hamad bin Jassim bin Jaber Al Thani for USD 179.4 million on the 11th of May, 2016.

La Femmes d’Alger is French for Women of Algiers. These are the series of 15 paintings by Spanish artist Pablo Picasso. This painting was sold in auction by Christie’s New York to former Qatari prime minister Hamad bin Jassim bin Jaber Al Thani in 2015 for $179.4 million. It is an oil on canvas type of painting. It was first bought by King Louis Philippe in late 1950s. This painting depicts Algerian concubines in their harem with a hookah. This vast canvas gives references to Cubism, violent colour clashes and brilliant syntheses of Picasso’s lifelong obsession, all packed together in one beautiful painting.

The final in our list of the ten most expensive paintings that have ever been sold in the history of art, Amedeo’s Nu couché is a 1917 oil on canvas painting. Also known as ‘Reclining Nude or Red Nude’ in English, Nu couché was sold at USD 170 million at a Christie’s, New York auction, on the 9th of November, 2015. The painting was bought by the Chinese businessman Liu Yiqian from the Italian businessman, Gianni Mattioli’s daughter Laura Mattioli Rossi, a famous art historian who inherited her father’s rich art collection.

Nu couché is known as Red Nude or Reclining Nude in English. It was completed in 1917. It is an oil on canvas type of painting by Italian painter Amedeo Modigliani. It is one of the defining masterpieces of his work; a beautiful fusion of classical idealism, sensual realism, and modernist invention. It is no portrait but rather a great artist’s paean to the idea of the beauty of life itself. The painting contains a red nude anonymous figure with arms open. The painting is one from the series of Modigliani’s nude paintings of 1917. It is one of a series which caused a scandal at the artist’s first solo exhibition in Paris in 1917.

These are the most expensive paintings ever sold. Do post your comments.