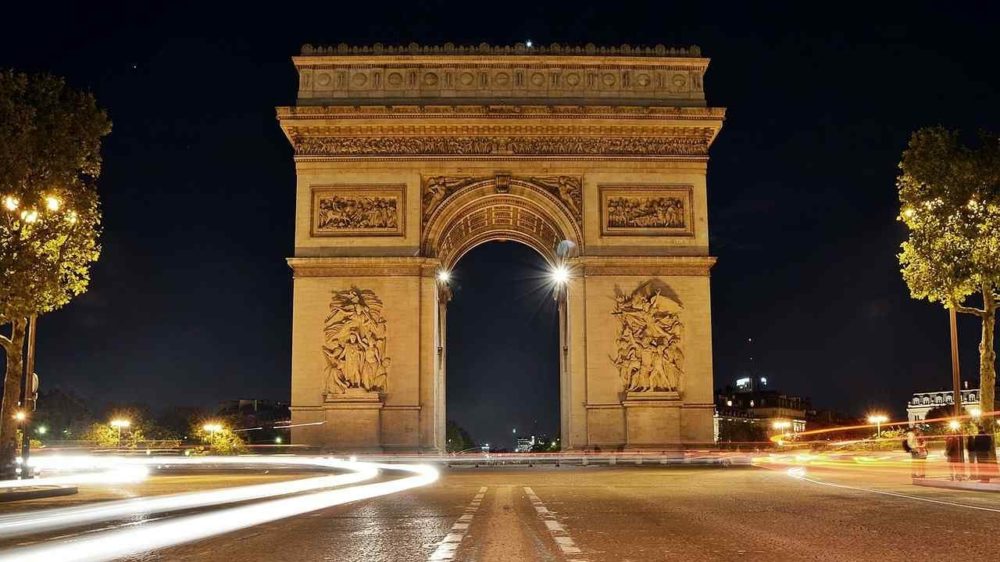 Patuxai is located in Vientiane, Lao People’s Democratic Republic. This large archway is a symbol of national dignity and victory for Vientiane, Laos. The Patuxai is a gargantuan architecture mainly similar to the Arc de Triomphe in Paris, but incorporating Buddhist elements. The arch was built to signify and remark independence of Laos from France in 1949.

The Laotian government commenced the work of constructing the Patuxai in 1957 but it was 1968 when they finished with the project and Patuxai was ready. The park, which surrounds the arch, includes a big curled pool and a chain of musical fountains. The Patuxai and its surrounding grounds are the main attraction of the city of Vientiane and a symbol of pride for the entire country.

Standing in the shadows of the Colosseum and Palatine Hill is the Arch of Constantine. This triumphal arch was erected by the Roman Senate in honour of Constantine I after his victory at the Battle of Milvian Bridge. The arch measures in at 68 feet (21 meters) high and 25 feet (84 meters) wide. The location of the arch between Palatine Hill and Caelian Hill was crucial as an antediluvian route, via triumphalis, taken by kings as they returned to Rome after winning. It was the last and biggest of the triumphal arches built in Rome.

Also read: Top 10 Churches In Rome You Should Visit in Your Lifetime

Timgad, also known as “The Pompeii of North Africa”, was a Roman-Berber town in the Aurès Mountains of Algeria. Founded by Emperor Trajan around AD 100, it resides in modern-day Algeria. The remnants signify one of the best-surviving illustrations of the grid planning which is used in Roman city planning. UNESCO registered Timgad as a World Heritage Site in 1982. When Timgad was founded originally, the area surrounding the city was a fertile agricultural area. One can easily get an idea of the original Roman grid through the orthogonal design of the Timgad.

The Arch of Septimius Severus resides inside the Roman Forum. This triumphal arch was built using white marble in AD 203. The purpose of this arch was to commemorate victories of Emperor Septimius Severus and his two sons in the two wars against the Parthians. This triple triumphal arch was one of the most lavishly decorated of its time and centuries later even today, although impaired badly, it stands as an enduring and dignified architecture of Roman antiquity.

The ancient city of Jerash is a popular tourist attraction in Jordan. It’s well preserved Roman ruins date back more than 6500 years. One of the popular spots among the city of Jerash is Hadrian arch. This triumphal arch was constructed to welcome the visit of King Hadrian in 129 AD. Walking through this triumphal arch gives you an idea of Rome’s solemnity and splendor. Hadrian’s Arch stand 13m tall at the entry avenue of Jerash. Honey-colored arrays of columns and walls can be seen along with some beautifully engraved with acanthus leaves. A pale view of hills in the distance is also present.

One of India’s most popular landmarks is Gateway of India. Situated in Mumbai, this enormous edifice was built in 1924 to monumentalize the visit of King George V and Queen Mary to Bombay (Mumbai). Residing at the tip of Apollo Bunder, the gateway is surrounded by the Arabian Sea overlooking the Mumbai harbor. Apart from being a major tourist attraction, Gateway of India signifies one of the chief ports of India. A lot of vendors, food stalls and photographers can be seen around the gateway. A first major event that took place at Gateway of India was The passing of the ‘First Battalion of the Somerset Light Infantry’, a function which was held on February 28, 1948, when finally all Britishers left India, post-independence.

One of the most popular architecture in Paris, Arc de Triomphe erects right in the center of the Place Charles de Gaulle, Champs-Élysées. The Arc de Triomphe was built to honor and commemorate the ones who fought and died for France in the French Revolutionary and the Napoleonic Wars. It is built on a Tomb of the Unknown Soldier from World War I. The monument erects 50 meters from the ground. Roman Arch of Titus was the inspiration behind its design. It is also listed as one of the famous man made arches in the world.

Constructed by Domitian in 81 CE, Arch of Titus is a Roman Triumphal Arch which resides on the foot of the Palatine Hill in the Forum Romanum, Rome. It was built to honor and commemorate the triumph of his father Vespasian and brother Titus in the Jewish War. During the Jewish war, Jerusalem was demolished leaving the authenticity of its temple devastated. The arch has political and religious significance as it denotes the sanctity of the late emperor Titus. Pentelic marble was mainly used in the construction of the Arc. The inscription is still visible written in bronze color.

The 42 m high India Gate stands right in the centre of New Delhi. It is totally inspired by the French “Arc-de-Triomphe” and is an archway in the middle of a crossroad. It was constructed to memorialize 70,000 Indian soldiers who martyred fighting for the British Army at the time of 1st world war. Names of more than 13,516 British and Indian soldiers who were killed in the Afghan war of 1919 are inscribed on the memorial.

After India got its independence, another memorial was added here named Amar Jawan Jyoti. The eternal flame burns day and night under the arch to commemorate the soldiers who martyred during the Indo-Pak War of 1971. Especially during nights, India Gate is really crowded with lots of visitors and vendors. The fountains nearby make a beautiful visual along with coloured lights. Surrounding the imperial architecture is a huge expanse of lush green lawns, which is a popular picnic spot.

The Triumphal Arch of Orange resides in the town of Orange, France. It was uncertain when the arch was built and there were several debates about it but as per the latest research, considering inscription as evidence, it has been claimed that this arch was constructed during the reign of emperor Augustus (27 BC-AD 14).  It was originally built to honour the veterans of the Gallic Warsand Legio II Augusta. Later it was reconstructed by emperor Tiberius to memorialize the triumphs of Germanicus over the German tribes in Rhineland.

These are the amazing monumental triumphal arches in the world. Kindly share and do post your comments.