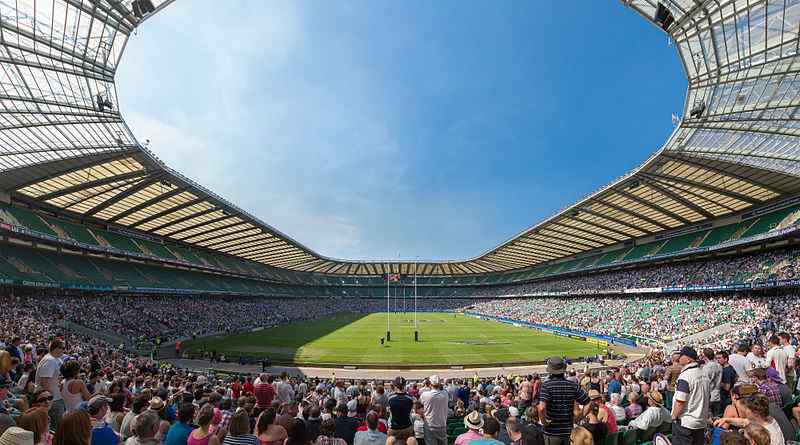 Europe is a continent dedicated to the sport and wholeheartedly supports its favourite teams in various league, national and international games. Football, rugby, and hockey are some of the most popular sports in Europe and the largest stadiums too are used for these games. Some large stadiums also host dance and music concerts and are rented out for private use. Here is a list of the 10 largest stadiums in Europe.

This huge stadium has a capacity just short of one lakh people and is the largest stadium in Europe. This stadium was opened in 1957 and renovated in 2008. As every football fan knows, this famous stadium is the home ground of FC Barcelona and many stars like Leonel Messi, Xavi and Iniesta have played on this ground. For every Barcelona fan, watching a match in this stadium is a dream come true.

The 3rd largest football stadium in the World followed by stadiums in Sao Paulo, Brazil and Mexico City. The stadium has hosted two European Cup/Champions League finals in 1989 and 1999 and many more major games. The construction of the stadium started on 28 March 1954 as Barcelona’s previous stadium, however, originally planned to be called the Estadi del FC Barcelona. The stadium was designed by Francesc Mitjans and Josep Soteras along with the collaboration of Lorenzo Garcia-Barbon.

The stadium has hosted many important events including the 1948 Olympic Games and 1966 Fifa World Cup. The stadium is a symbol of English football and has hosted 78 FA Cup Finals and the Euro 1996 football championship. The stadium grass is a combination of real Wembley grass and synthetic grass to make playing surface more strengthen. The roof of the stadium covers every seat in the stadium making it one of the largest fully covered stadium in the world. 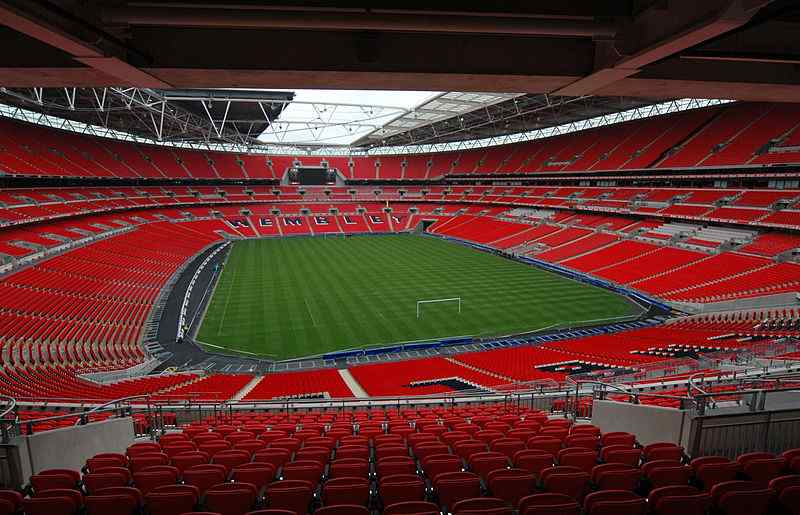 This ground in Ireland is one of the largest stadiums in Europe with a seating capacity of over eighty thousand. This is one of the oldest stadiums on this list and was first opened in 1884. Since then it has been renovated multiple times to increase its capacity and carry out repair works. It is currently owned by the Gaelic Athletic Association and used for athletics and Gaelic football. It is the largest stadium in Europe not used for Association football.

The stadium primarily hosts Gaelic games (Annual All-Ireland finals in football and hurling). The biggest crowd stadium hosts in 1961 when 90,556 fans watched County Downplay County Offaly in the All-Ireland Football Final. The redevelopment of the stadium begins in the 1980s and the new stadium was opened in 1991 with a capacity of over 80,000. The final phase of the redevelopment began in 2003 and it is finally focussed on Nally Stand and Hill 16. 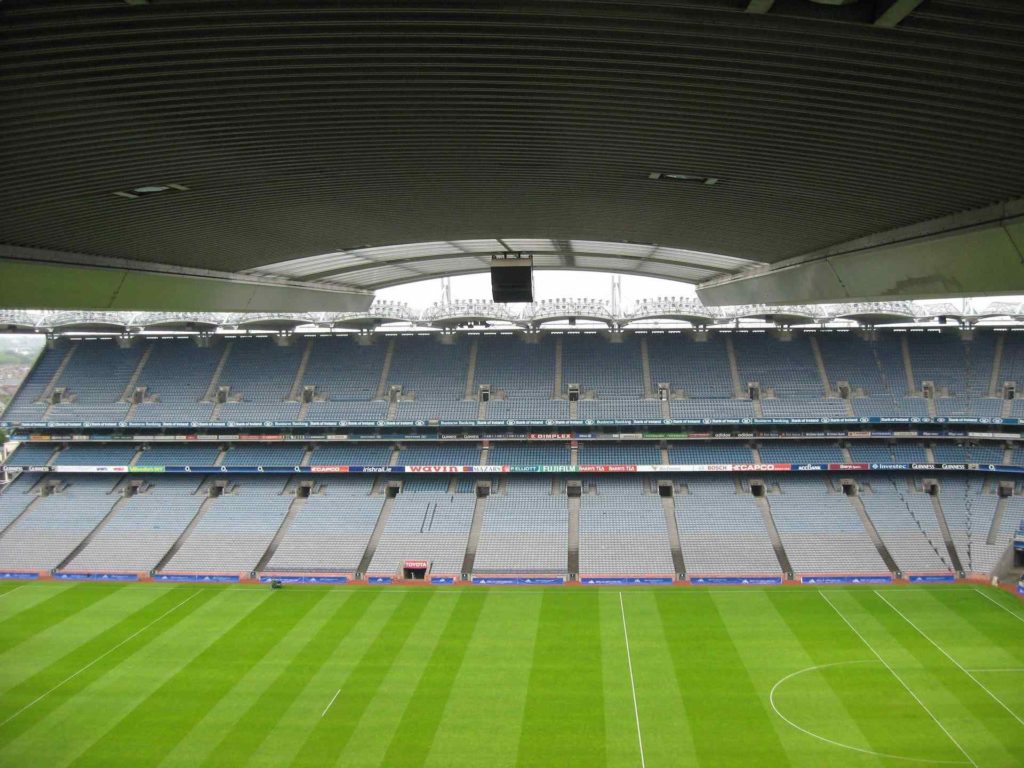 Another stadium with a capacity of more than eighty thousand spectators, this stadium is located in London and is the second largest stadium in that city after Wembley, which is the largest. This stadium is not used for football and is the largest rugby stadium in the world. It was opened in 1909 and since then has been renovated periodically by the Rugby Authority to maintain the stadium an increase its capacity. The stadium has hosted certain high profile rugby matches that includes Rugby World Cup finals in 1991 and 2015, and the semis in 1999. The first rugby match was played in the stadium in the year 1909 between the Harlequins and Richmond.

This stadium in Paris is famous for having hosted the 1998 FIFA World Cup Final. The construction began in 1995 and was completed three years later. This stadium regularly hosts football and rugby matches, other sporting events as well as musical concerts. Till now, this is the only stadium in the world to have hosted the final for a football world cup and a rugby world cup. Stade de France is regularly used by football and rugby teams of France. 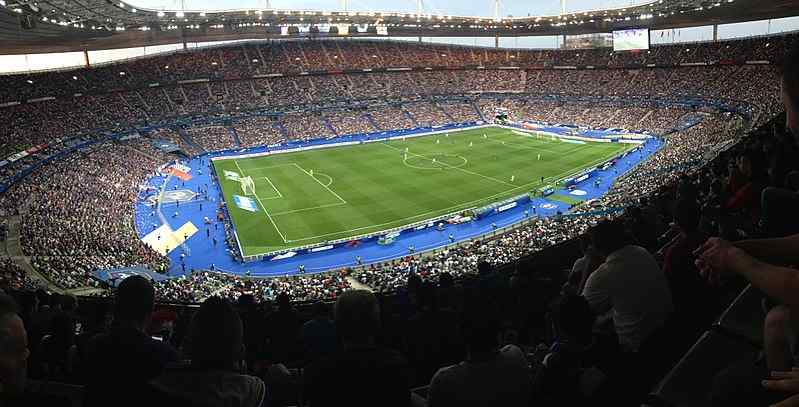 This famous stadium is not just an attraction for football fans but also features prominently on all tourist checklists for Madrid. It is the home ground of one of the best football clubs in the world – FC Real Madrid. The stadium was opened in 1947 and since then has been regularly expanded to increase the seating capacity. Watching a Real Madrid game on their home ground is an unforgettable experience every visitor to Madrid must have.

The stadium hosted the European Cup final of 1964 between Spain and the Soviet Union. The match was won by Spain by 2-1 and being crowned European Champions for the first time in its history. It also hosted games such as four games of the FIFA World Cup in 1982 and the final between Italy and West Germany with the Italians winning 3-1. 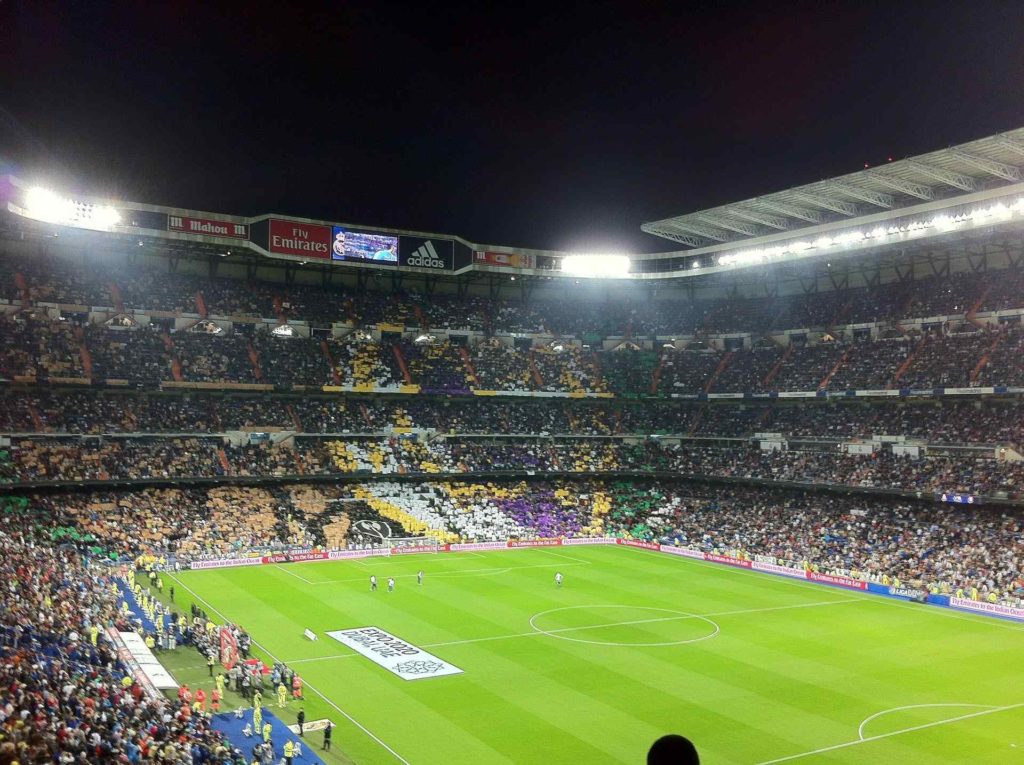 Opened in 1957, this is one of the largest stadiums in Europe and the largest in Russia in terms of seating capacity. Before 1992, when Russia was part of the Communist Soviet Union, this stadium was known as the Central Lenin Stadium. The record attendance at this ground was 102,538 spectators for the Football World Cup Final between Russia and Italy in 1963. It is also the home ground of the Russian national football team. The stadium has hosted many events such as the 1980 Summer Olympics. The original stadium was demolished in 2013 to be rebuilt for 2018 FIFA World Cup, however, the revamped stadium lost its athletics tracks but the capacity was increased to 81,044 spectators. 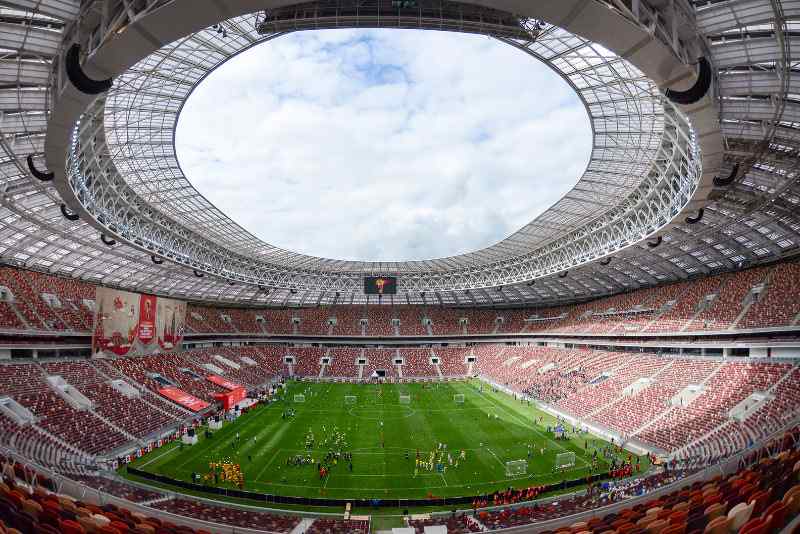 This large stadium is located in the North Rhine-Westphalia region in Germany. It is the home ground of the Borussia Dortmund football team which has had many successful games on their home ground. The town is known to enthusiastically support their team and the stadium is frequently filled to full capacity to cheer for their team. In order to feel the electric energy of this stadium, a visit to this stadium should definitely be on your itinerary. 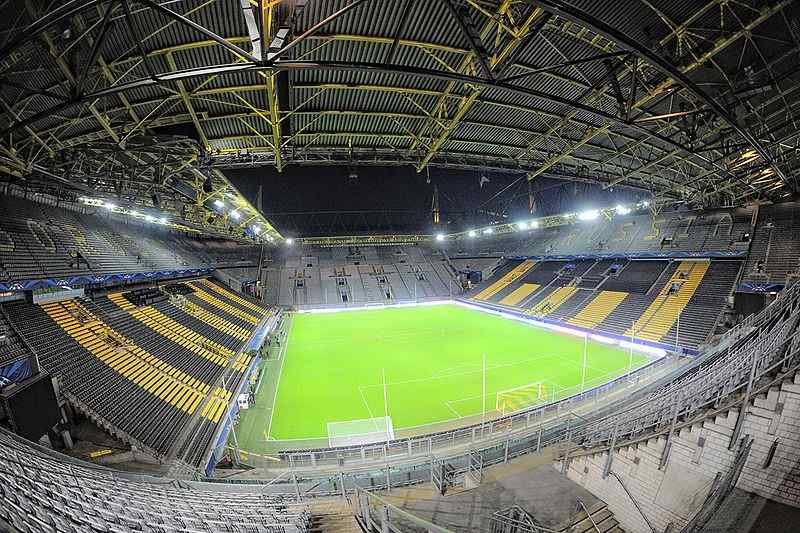 This famous stadium was constructed in 1926 and became the home ground of A.C. Milan until 1947. In 1947, it was handed over to Inter Milan and since then has been their home ground. Apart from being one of the largest stadiums in Europe, it is also one which offers the best view of the game since the stands are very close to the ground, offering spectators across the stadium an excellent view. One of the most awaited games on this ground is the Milan Derby between the two clubs of Inter Milan and AC Milan, better known in Italy as Derby Della Madonnina. 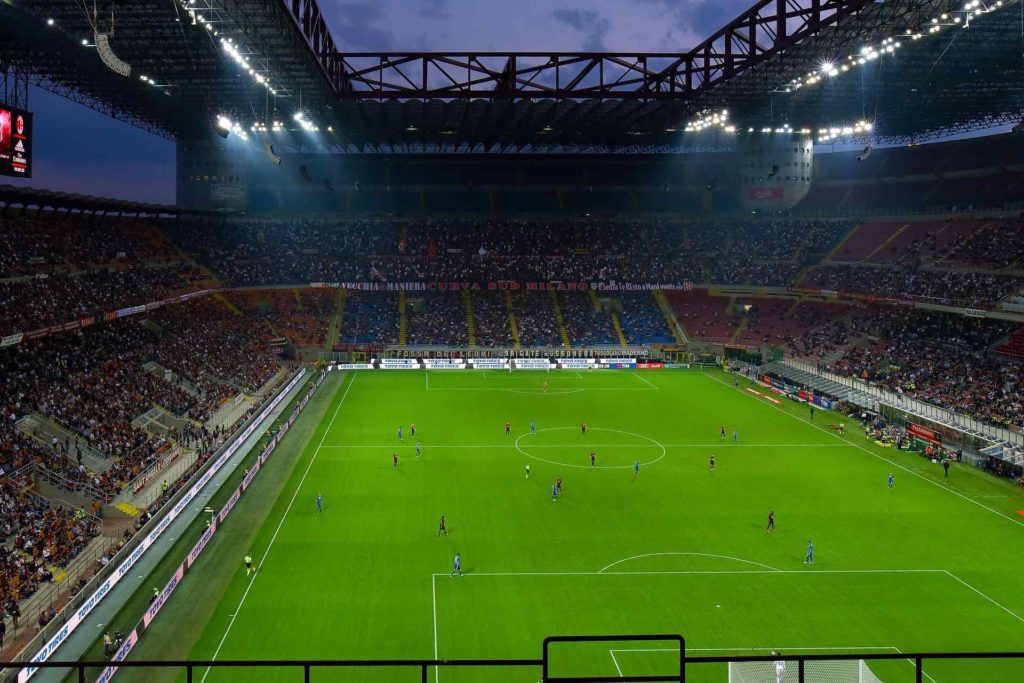 The London Olympic Stadium was constructed in 2012 specifically to host the 2012 Olympic Games and the famous opening ceremony of this Olympics also took place on this ground. It has a seating capacity of eight thousand spectators but is currently being renovated which has reduced its capacity to 54,000 people. The beautifully designed stadium is located just beside the Thames River where the Aquatic Center is built. Currently, the stadium is mostly used by the West Ham United Football Club and the British Athletics. For the Olympics opening ceremony, each seat was fixed with light panels to make the stadium appear colourful. 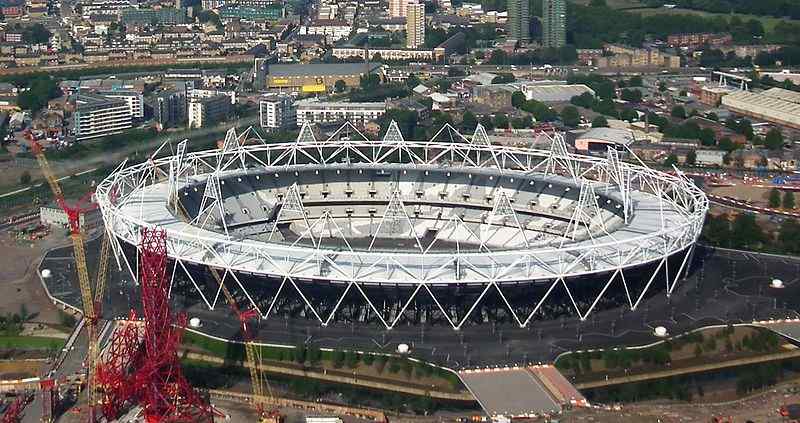 Watching a sports game in a stadium is a uniquely electrifying experience that one can relate to only after actually having it. Cheering for your favourite team along with a large excited crowd somehow makes the game even more enjoyable. These are the 10 largest stadiums in Europe.