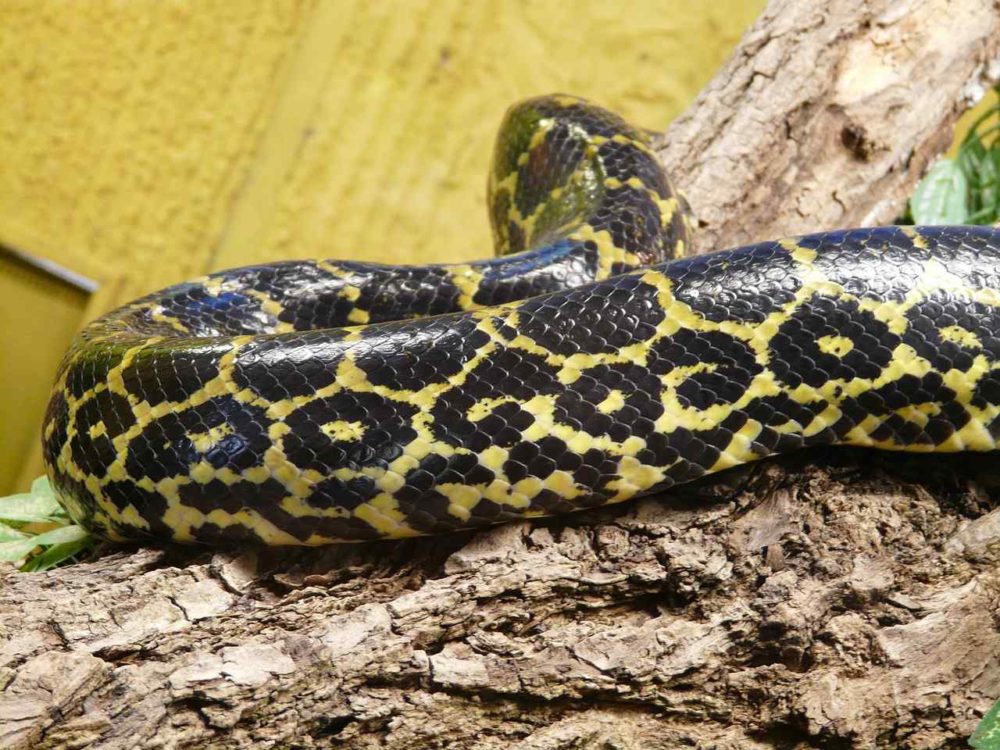 Snakes are elongated, legless, carnivorous reptiles having more than 3400 species on earth. Though snakes are very similar to legless lizards they lack eyelids and ears. Most snakes are non-venomous but the ones having venom used it to kill its prey. Fossil evidence suggests that snakes have been evolved from burrowing lizards. Snakes have highly mobile jaws which enables them to swallow prey much larger than their head. Here is a list of world’s top 10 Largest snakes in the world,

Largest Snake In The World

It is the heaviest and longest known snake species. It is a non-venomous snake also known as “common Anaconda” or “water Anaconda”. The name “Anaconda” was first derived in Sinhala, Sri Lanka and in 1869 an Englishman John Ray wrote of “Anacandia of cylonese” which means the one who crushes the limbs of the buffaloes and yoke beasts. Green Anaconda is the world’s longest snake reaching up to 5.1 Metres in length and also the world’s heaviest weighing between 30-60 kg. One of the most dangerous amazon rainforest animals, Green Anaconda is olive green in colour with black blotches along the length of the body.

One of the largest snakes in the world spends most of the time alone in the wild, however, in the month of April and May it looks for the opportunities with the female for mating and many times multiple males pursue one female. They spend most of the time hunting in water and use both sight and smell to hunt and usually hunt on fish, birds, tapirs, wild pigs, capybaras, and caimans. 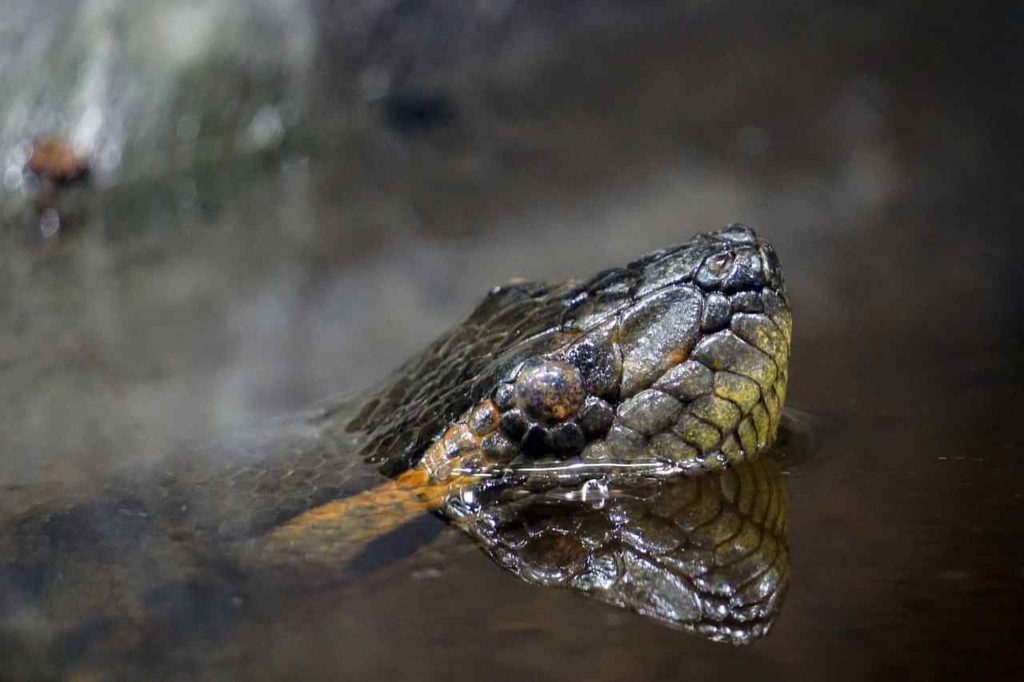 It is the world’s third largest snake considering length or weight to be a parameter. You will find these snakes in the tropical south or southeast Asia. Earlier it was considered to be a sub-species of python molurus but now it is considered to be a distinct species. Burmese pythons are dark coloured snakes with dark black patches at the bottom back of its tail. On an average Burmese python grows 3.7 metres. They have prehensile tails which makes them good climbers.

They are excellent swimmers and they love to be around water bodies so that they can be spent a part of the time in the water. Burmese python breed in early springs with females laying clutches of twelve to thirty-six eggs in months of March or April. The Burmese python is a subspecies of Python molurus that is mostly seen in southern China, Indochina, Burma, and portions of Indonesia that include Borneo, Java, Sumatra, and the Celeb Islands. The average lifespan of the king cobra is more than 20 years in the wild, however, they can live longer in captivity. 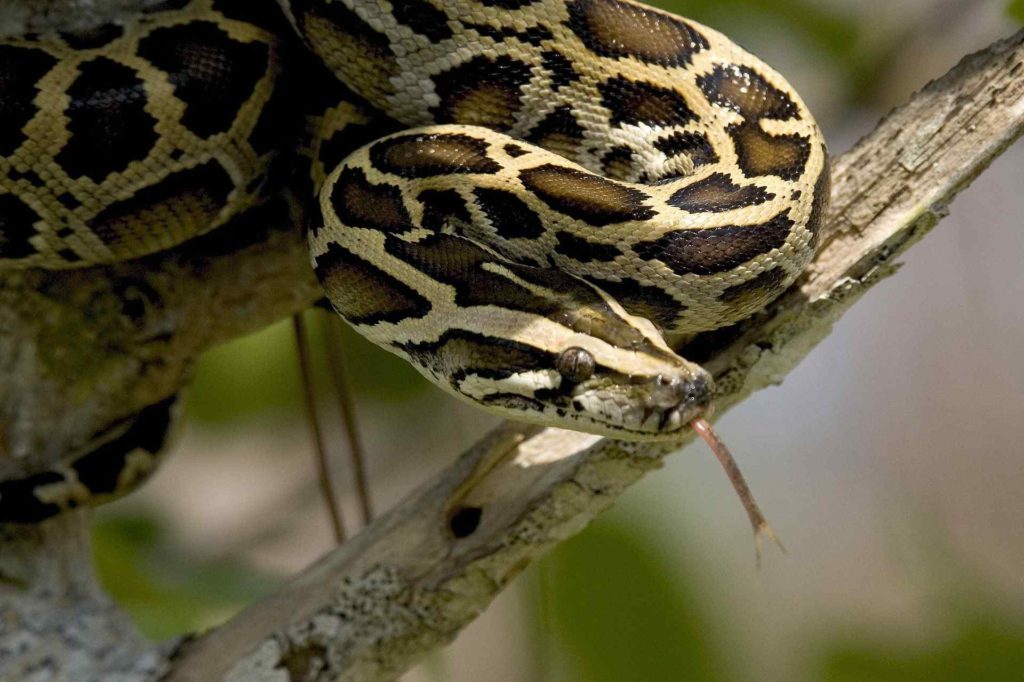 One of the largest snakes in the world, Reticulated Pythons can grow upto 10 metres long and can eat a wide range of mammals and birds such as the size of pigs and deer. The snake species has over 100 teeth so that they can grab their prey and can wrap their coils around and suffocate the meal till death.

Talking about the breeding point, the females lay between 25-80 eggs. The babies will hatch after 85 days and are about 60-70 cm long. The species mostly were seen in throughout south-east Asia from India, Bangladesh and Myanmar. Also, they are seen in down to Indonesia and the Philippines and love to thrive in rainforests, woodland and surrounding grassland.

Also Read: This Is The Largest Reptile Zoo In The World 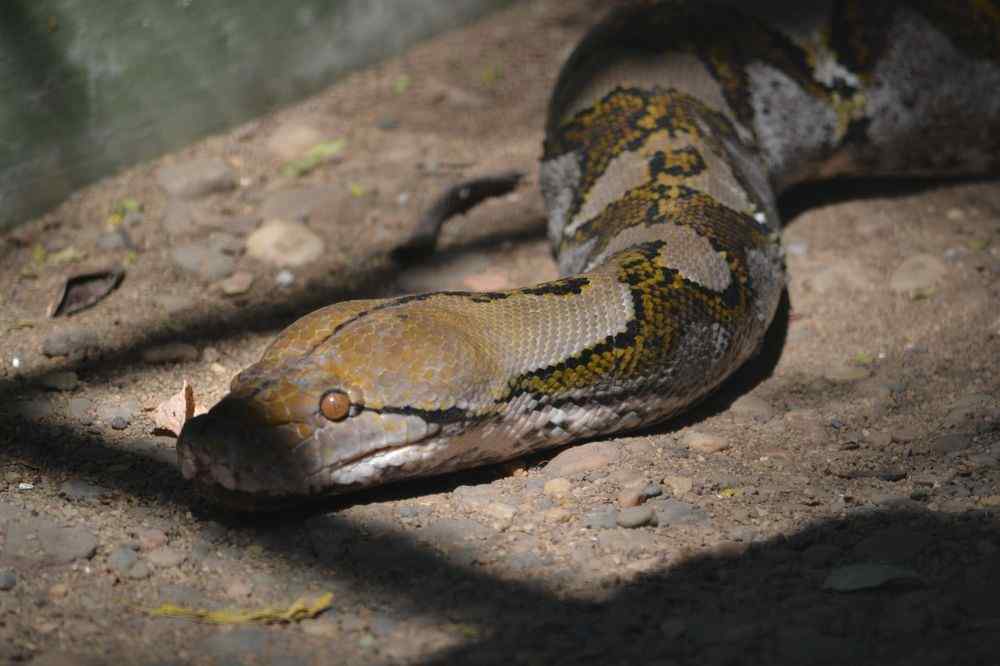 A large non-venomous snake of Sub Saharan Africa. It belongs to the species genus python. It has a long stout body patterned with irregular patches of different colours. Like other pythons, the scale of African Rock python is small and smooth to touch. Females are typically larger than men. African Rock python is classified into two sub-species. One is found in central and western Africa and the other in southern Africa. Being a non-venomous snake, it kills its prey by constriction. The Africa Rock python feeds on antelope, warthogs, monkeys, rats, puppies of wild dogs such as Jackal. 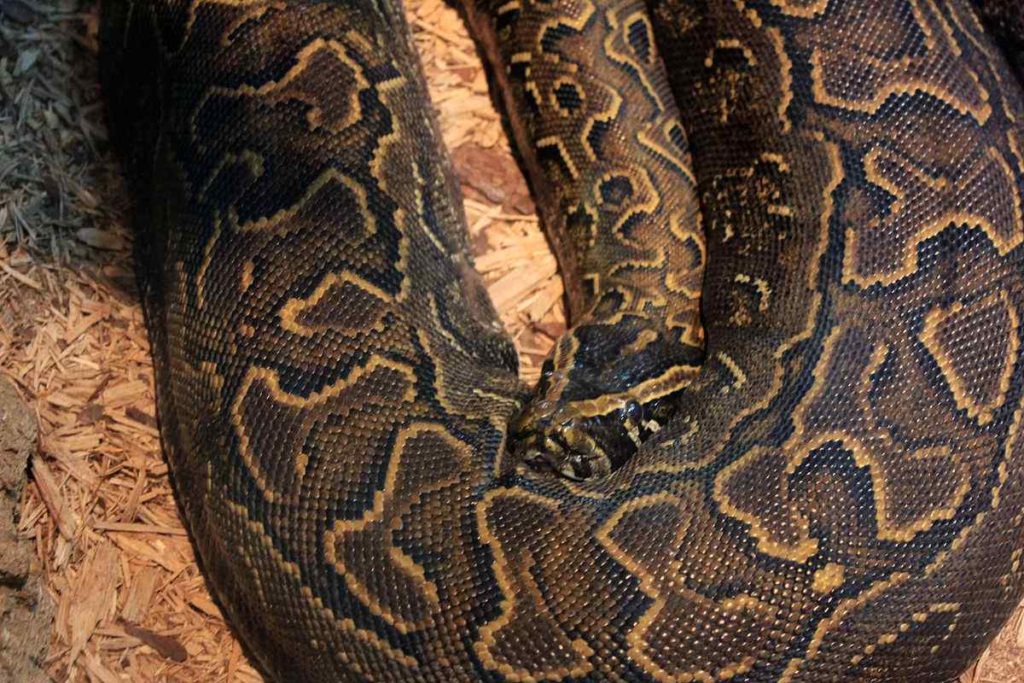 A large non-venomous python species found in the subtropical areas of Indian Subcontinent and in the regions of Africa. “Black python”, “Indian Rock python” are other names by which this species is also named. This species is limited to south-east Asia only and you will not find it on any other parts of the world. It is a heavy body snake with a large body and pinkish head.

The newborn black panther is 40-45 cm long and grows up to 350 cm and hence termed as one of the largest snakes in the world. They have triangular head pretty broader than the neck. They have a short tail. Though these are non-venomous snakes, their bites give serious injuries which can cause skin rupture at the sight of bite. 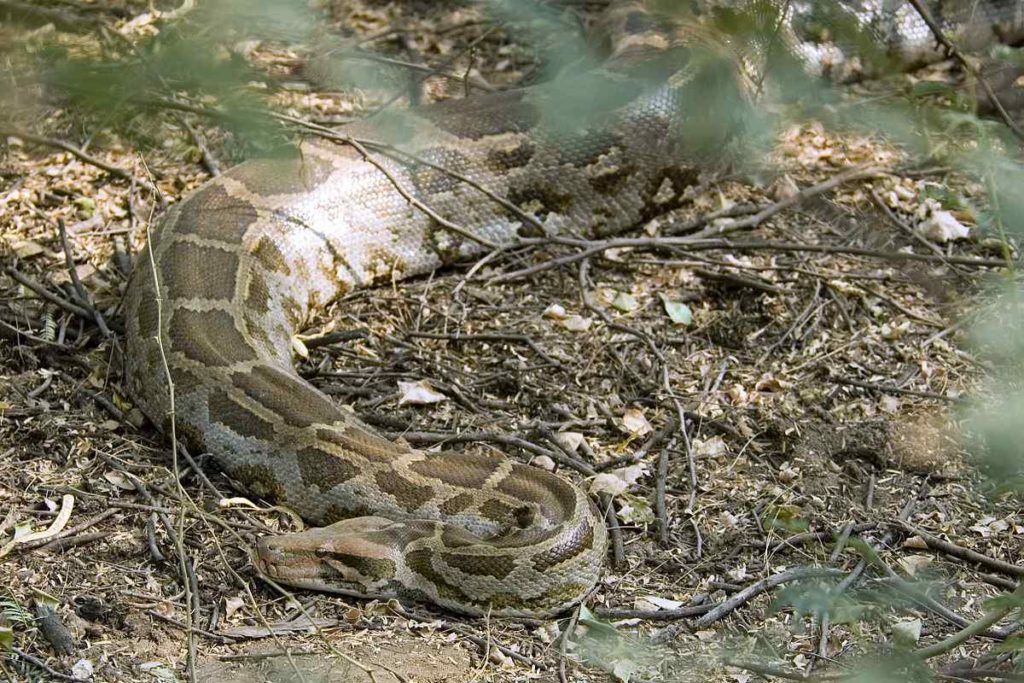 The nonvenomous snake mostly is seen in Indonesia, Papua New Guinea and Australia. The snake carries an amethyst coloured shine over its body and hence the name. The longest nonvenomous snake in Australia can grow upto a length of 8.5 metres, howvever, they are seen frequently at lengths of about 5 metres. Pythons do not kill their prey by crushing to death instead they suffocate by tighten the coils around their prey until no longer draw breath and die due to lack of oxygen. They love to eat small mammals such as fruit bats, rats and possums. 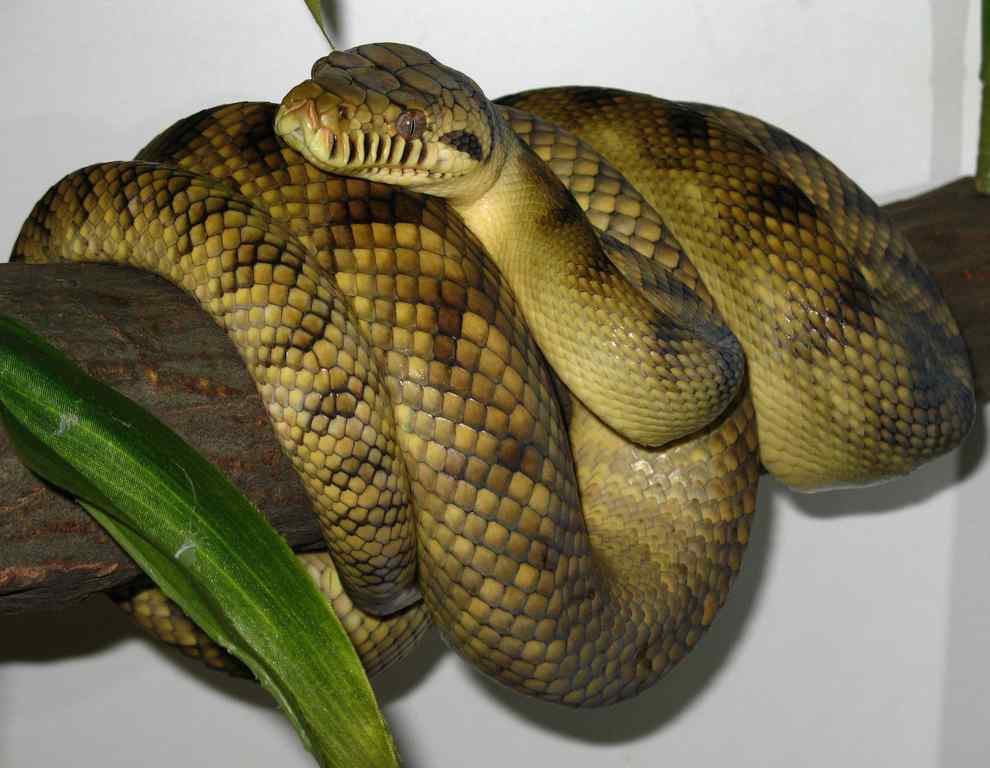 Yellow anaconda is a non-venomous boa species mostly seen in the southern regions of South America, including Paraguay, Bolivia, Uruguay, southwestern Brazil and northeastern Argentina. Also, known as Sucuri Amarela (in Brasil) and Paraguayan Anaconda, the snake species prefer aquatic habitat that includes marshlands, swamps or the banks of slow-moving rivers and streams, however, they can be seen in forests searching for the prey. 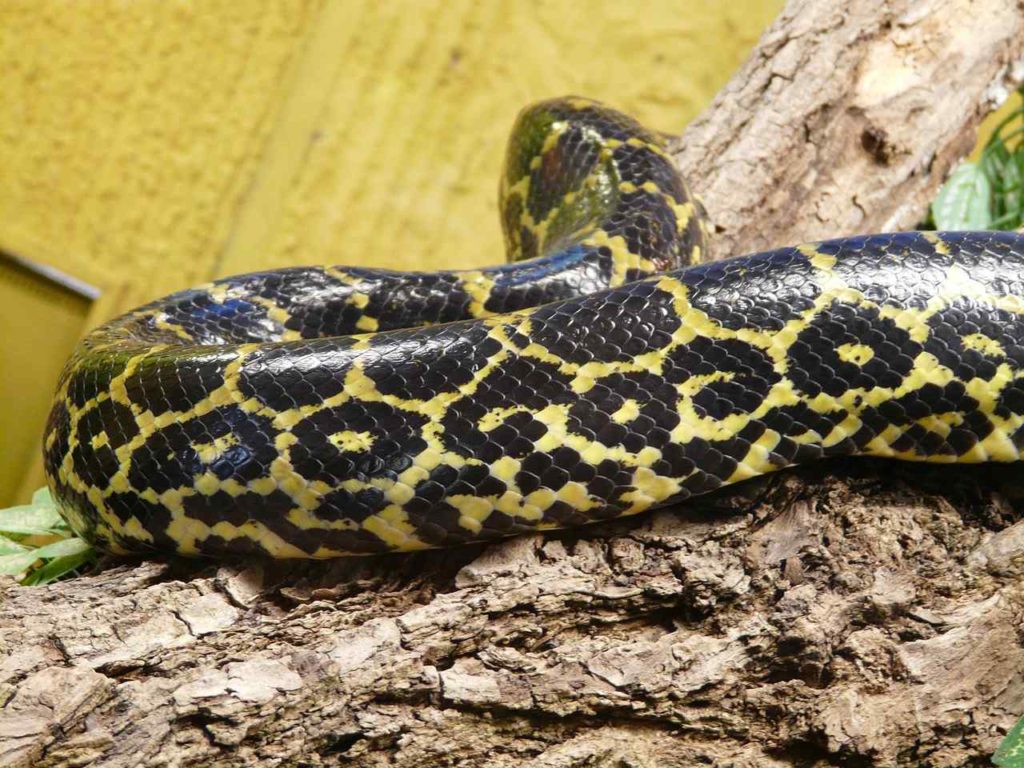 One of the powerful snakes mostly seen in the tropical climates throughout most of Central and South America and mostly hunt at night. The snake species love to hunt ambush prey, such as rats, birds, monkeys, or wild pigs and swallows its prey whole and later, food is digested by strong stomach acids. Once the species has taken a strong meal, the species does not take need to eat again for weeks. The snake species grows throughout its whole life and mostly it is 20 to 30 years. 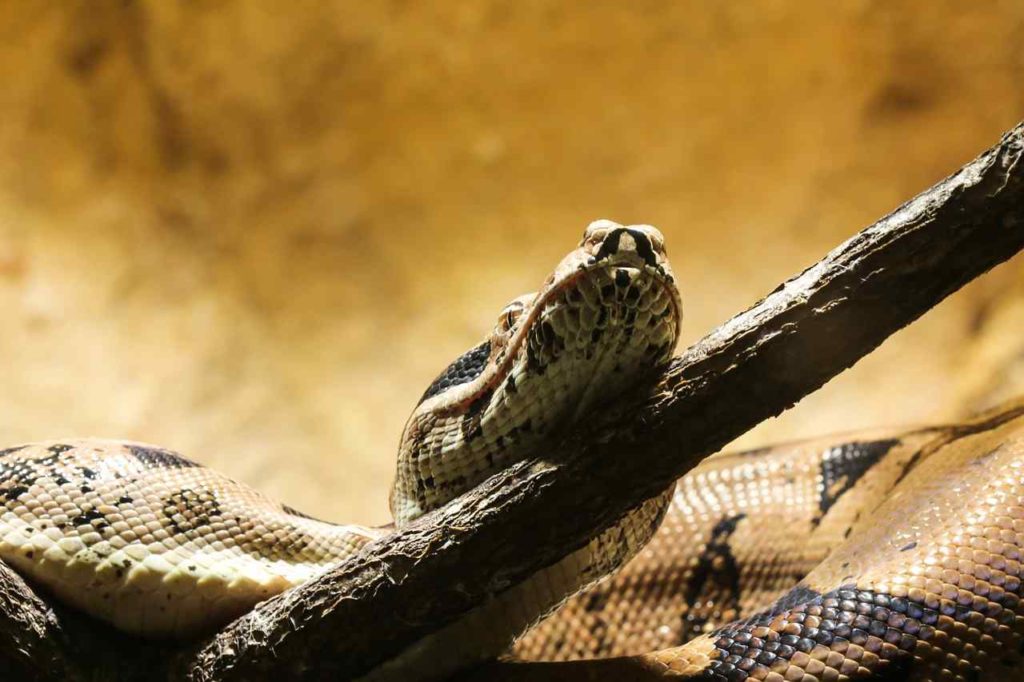 Also known as Eunectes deschauenseei and it has the same weight and length as the yellow anaconda. Talking about the appearance, the species is brown in colour with large dark spots seen throughout the body. However, the species is not similar to the Green or Yellow Anacondas and mostly seen in the northern Brazil and French Guiana. Like all other Anaconda species, it also lives in wetlands. 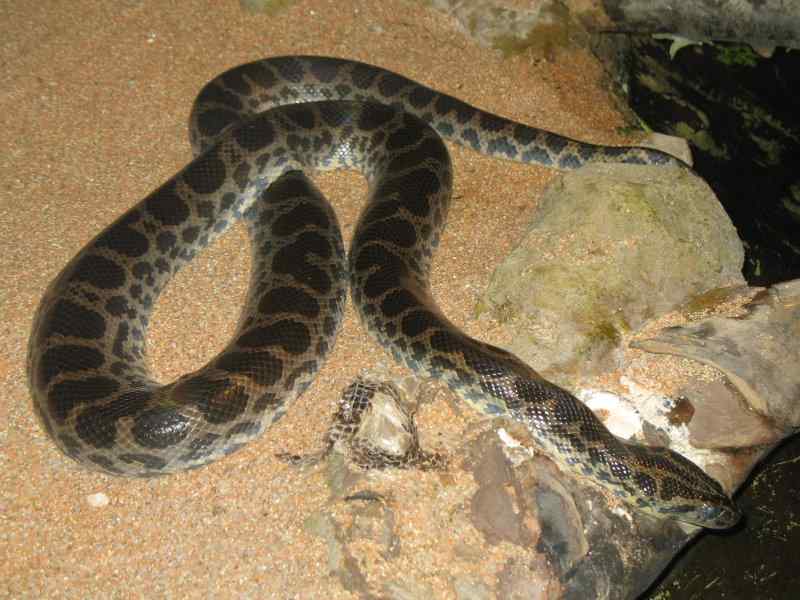 The snake species is longest of all arboreal Boas and also they are known for their extremely well-developed heat-sensing pits that are located on the lower jaw. The species can reach upto a length of 4 m and they are one of the larger species of boa of this genus. The species is carnivores and loves to eat small mammals including rodents. 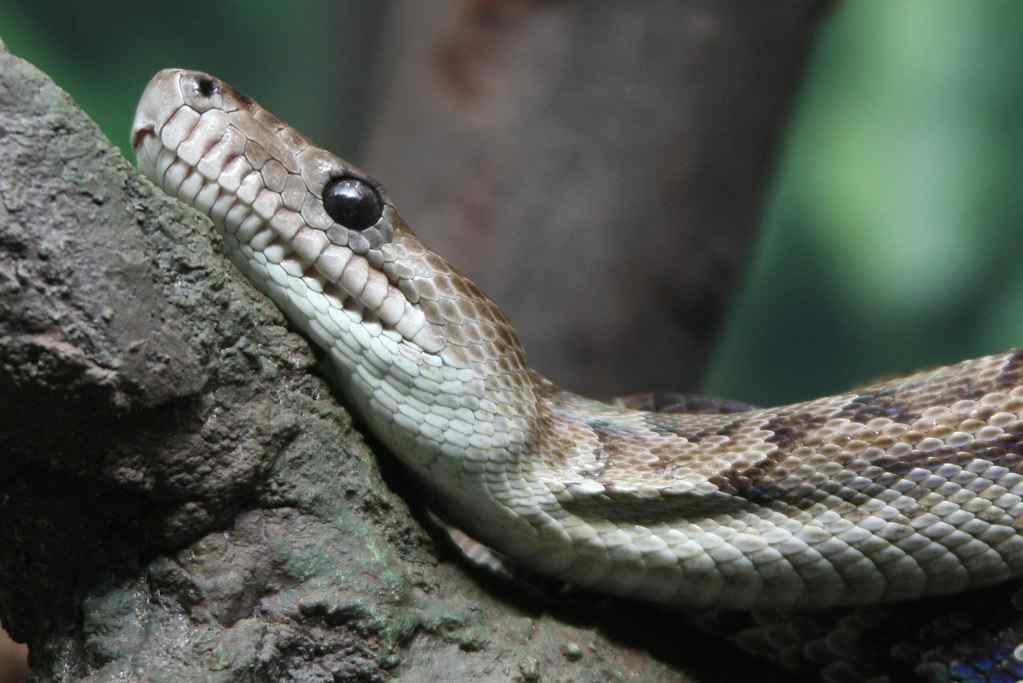 The species of python popularly known as the Irian python or Papuan python mostly seen in New Guinea. The large snake can grow upto 5 m (17 feet), howvever, the body is not heavy as compared to other pythons. The unique ability is to change colour, however, the exact mechanism and reasons for it are not completely understood. The diet consist of smaller mammals, however, they are also known to be partly ophiophagous (Feeding on snakes). 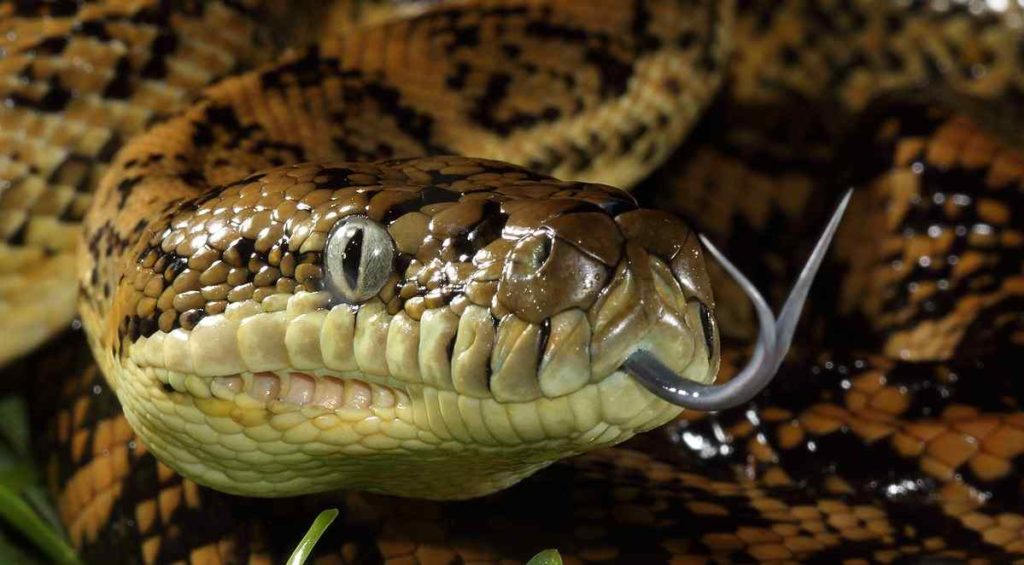 These are the largest snakes in the world. Do post your comments.