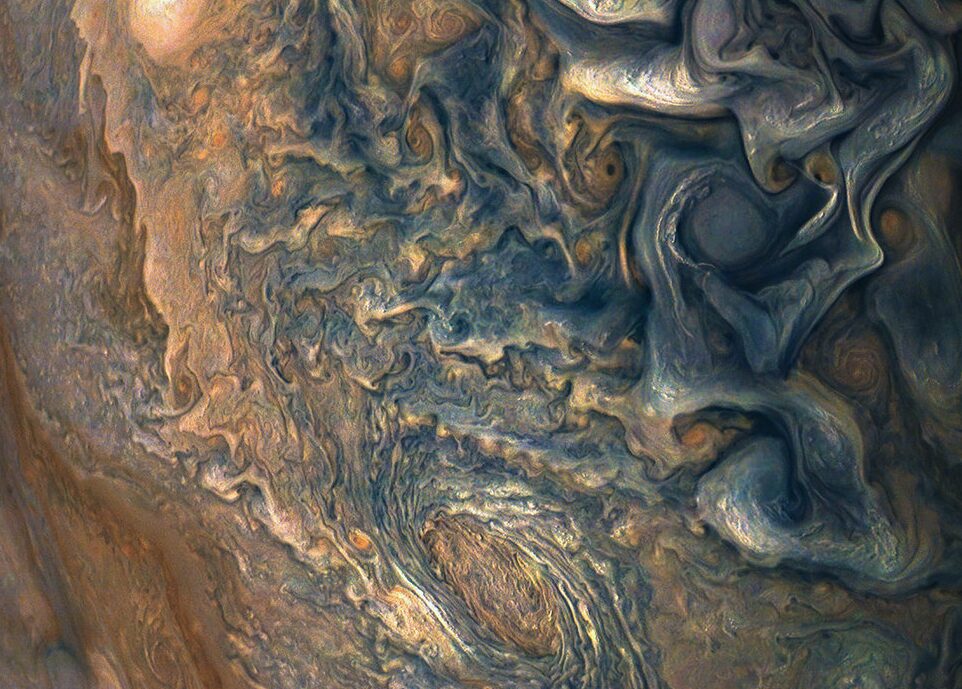 NASA’s Juno spacecraft has captured some stunning images of Jupiter. The Juno spacecraft was orbiting gas giant Jupiter with a speed of 130,000 mph, it takes photos every 53 days that are unlike anything I have ever seen. The pictures are indeed beautiful.

High Above the Jovian Clouds: This image of colorful, turbulent clouds in #Jupiter’s northern hemisphere was captured during my latest flyby of the planet https://t.co/zQ6OFl5WLC pic.twitter.com/NWMxnJzGwA

The Juno aircraft takes a long time to send photos from Jupiter to Earth as the distance between these two planets is about half a trillion miles which are approximately 562,382,633 miles. The weird intricate patterns you see on Jupiter images depict highly uncertain and changing the atmosphere of the planet. It looks like a beautiful Art. The Juno spacecraft was at Jupiter’s clouds while it is capturing images of the planet. Later, Gerald Eichstädt and Seán Doran make required changes in the images so that it looks fascinating to the space hipsters. Also, read about Scientists Discover Almost 100 New Exoplanets.

Just to let you know, Initially, JunoCam imager was not installed on the spacecraft, However, later scientists added it camera just to take coloured images and initiate public interest in this memorable mission.The Juno spacecraft took off from Cape Canaveral, Florida, on Aug 5, 2011, and reached Jupiter after completing nearly five years long journey on July 5, 2016. The mission initiative was to learn the atmosphere, magnetosphere, structure and origins of gas giant Jupiter.

“Jupiter completely fills the image, with only a hint of the terminator (where daylight fades tonight) in the upper right corner, and no visible limb (the curved edge of the planet),” NASA explains of the photo. “Juno took this image of colourful, turbulent clouds in Jupiter’s northern hemisphere on Dec. 16, 2017, at 9:43 a.m. PST (12:43 p.m. EST) from 8,292 miles (13,345 kilometres) above the tops of Jupiter’s clouds, at a latitude of 48.9 degrees.”

The photo was taken by Juno and uploaded to NASA’s JunoCam website.