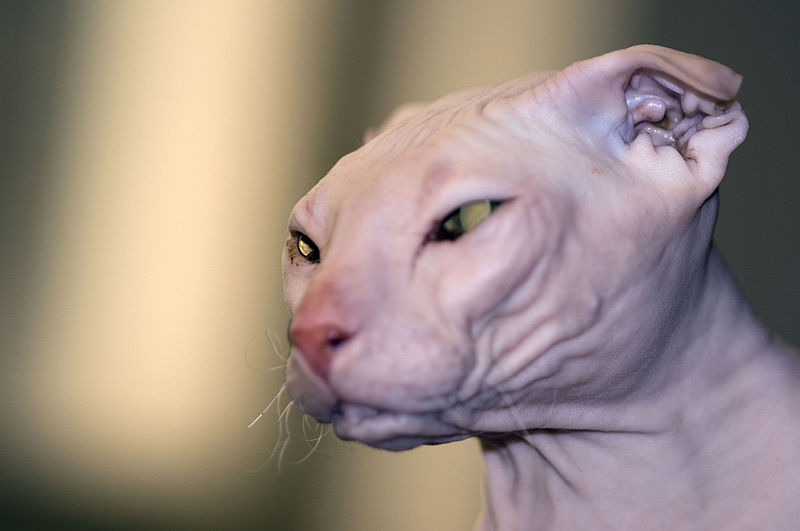 Cat, one of the most favourite pets of human beings is considered as the most loving and cutest animals which people usually prefer because of their soft coat (fur), glittering Eyes and the cutest small paws which they often use for playing with their Masters. But some people prefer hairless cat breeds because of the reason that they do not pass on the glycoproteins on to their skin’s coat which can prove to be allergic for some kind of people. Also, they do not require a daily Bath rather once in a week is sufficient for them. Here is the list of top 6 hairless cat breeds,

The Donskoy Cat is a hairless breed of cat that has a Russian origin. It was discovered in the Russian city of Rostov-on-Don by cat breeder Elena Kovaleva in 1987. The Donskoy was officially recognized for the first time by world Cat Federation (WCF) in 1997, and by The International Cat Association (TICA) in 2005. This breed of cat is generally characterized by the medium-sized and muscular body, with large ears, almond-shaped eyes and distinctive long, webbed toes.

They require frequent grooming, in spite of their lack of fur’s coat. However, they do not require a daily bath as over-bathing can cause their skin to become very oily. Additionally known as Don Sphynx, Russian Donskoy, Don Hairless and Russian Hairless is medium sized muscular cats with no hair and wrinkled skin, although, cats are capable of growing a winter coat usually on the chest and tail, however, they shed when the weather becomes warmer again.

Related: Top 10 Most Beautiful Cat Breeds In The World 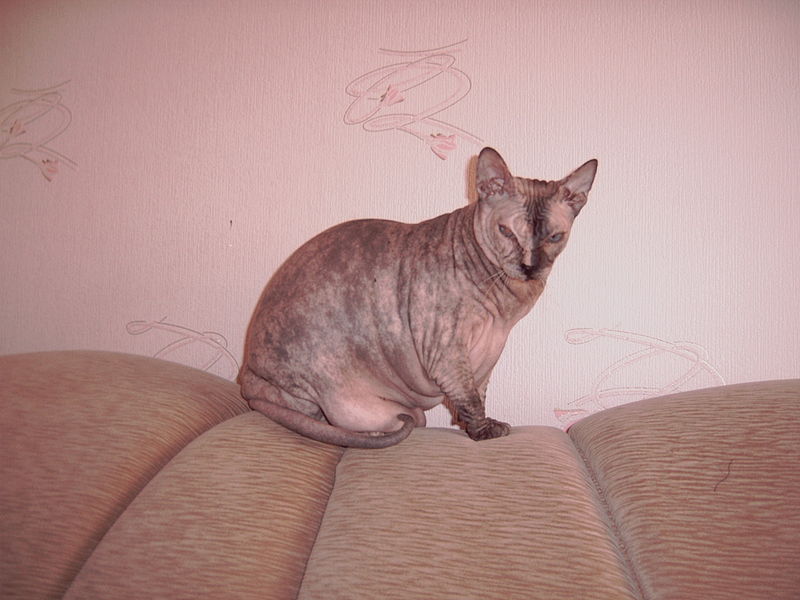 The Ukrainian Levkoy is a cat breed that possesses distinct appearance and has inward-folding ears. These cats are of medium size with a longish muscular and slender body. However, they have soft elastic skin which sometimes leads to a wrinkled appearance. Apart from the Ukrainian and Russian clubs, the breed is not recognized by any major, international cat fancier and breeder organizations. However, Ukrainian Levkoys are mostly friendly in nature, they are also playful, and intelligent cats that demonstrate a very sociable, enjoyable behaviour with humans as well as with other domestic animals.

One thing should be noted that Ukrainian Levkoys do not require brushing rather, they require special skin care protection from direct sunlight and more particularly from cold weather conditions. They are one of the unique hairless cat breeds and their lobed ears look similar to the ears of the Scottish Fold cat breed, however, they have a black skin that requires bathing in every two weeks and wipes as well. The nails should also be trimmed every few weeks.

The Peterbald is a Russian origin cat breed, discovered in St Petersburg in 1994 from an experimental breeding by Olga S. Mironova. The breed was accepted for Championship class competition in 2009. The Peterbald generally have a hair-losing gene and can be born bald, or with a straight coat. Those born with hairs, except the straight-coats, can lose their hair over time. The Peterbald cats generally have a slim and muscular body type with narrow and long head, almond-shaped eyes, wedged muzzle, and large ears.

They have a long whipped tail, webbed feet and oval-shaped paws that help them to grasp the objects easily and also helps them to open the levered doorknobs. The lifespan of the cat breed is up to 10 and 15 years, however, it is not related to the baldness of the species. Hairless cat breeds require special care, although, the Peterbald and the Sphynx look so similar that they can be confused in the sense of appearance the shorter lifespan of the Peterbald is not easily understood. 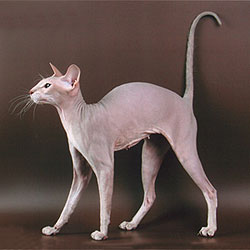 The Elf cat is the newest and extremely rare hybrid breed of Cat originated by crossing the Sphynx with the American Curl by Karen Nelson and Kristen Leedom. The Elf cat has the hairless appearance, which it has acquired from the Sphynx and has inherited the curled ears from the American Curl. The Elf cat has an athletic and muscular body and it also has very prominent cheekbones and whisker pads. The Elf Cat has skin type which is intensively wrinkled around the shoulders, ears, and muzzle.

The ears are curled backward, however, ear furnishings are missing. Moreover, the Elf breed has unique ears with the overall hairless appearance which constitutes the most recognizable features of this breed. The extreme weather and cold temperatures are harmful to cat species, however, the breed is overall healthy and free of the genetic defects. They are friendly, intelligent and famous for their affectionate nature. 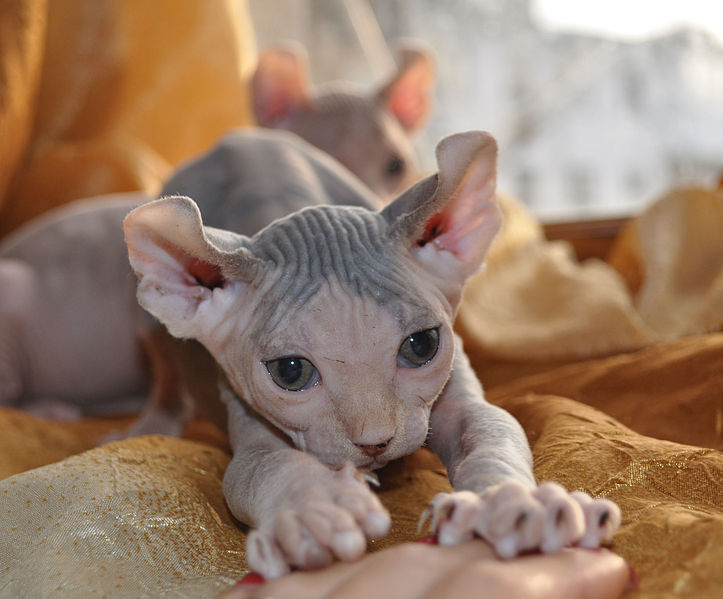 The Bambino is a breed of cat that was originated as a result of crossbreed between the Sphynx and the Munchkin breeds. The Bambino cat generally has short legs and large upright ears. They are usually hairless but some Bambino cats do have fur. The wrinkled hairless body and short legs make this breed really a distinctive one. However, the front legs are slightly shorter than the back legs.

Also, they have a medium to the long-sized body, with a broad chest and a well-rounded abdomen. Bambino cats are also possessed friendly behavior, they are also very intelligent, and affectionate. They also love to be cuddled up on the laps of their owners and other family members. Moreover, they are adaptable and these cats can adjust to new environments very easily. The cat breeds are intelligent and affectionate in nature. Love to spend time with the family along with children and other domestic pets, however, children should be taught to treat the cat breed respectfully and proper introductions should be made. It weighs around 5 to 9 pounds and can easily adjust to new environments. 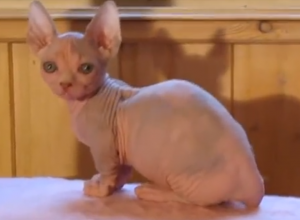 The Sphynx cat is a famous breed of cat which is well known for its lack of coat (fur). It was discovered through a selective breeding technique, which was started in the 1960s. The Sphynx Cat have skin with the texture of chamois, and it also has fine hairs. Also, Whiskers may be present on the body, either whole or broken or maybe totally absent. The Sphynx cat’s skin has no coat that is why they lose more body heat than coated cats. This makes them warm and more heat-seeking. However, Sphynx Cat breed also exhibits extroverted behavior and they display a high level of intelligence, curiosity, and affection for their masters. It is also listed as one of the ugliest animals in the world.

The Sphynx Cat breed demonstrates certain dog-like behavior such as greeting their owners at the door and also it becomes very friendly while meeting with strangers. The cat breed is famous for its high energy, climbing atop doors and balancing. The breed is loyal and affectionate towards its masters and will follow everywhere. It hates ignorance and will do anything to get your attention. The behavior is also good with other animals. 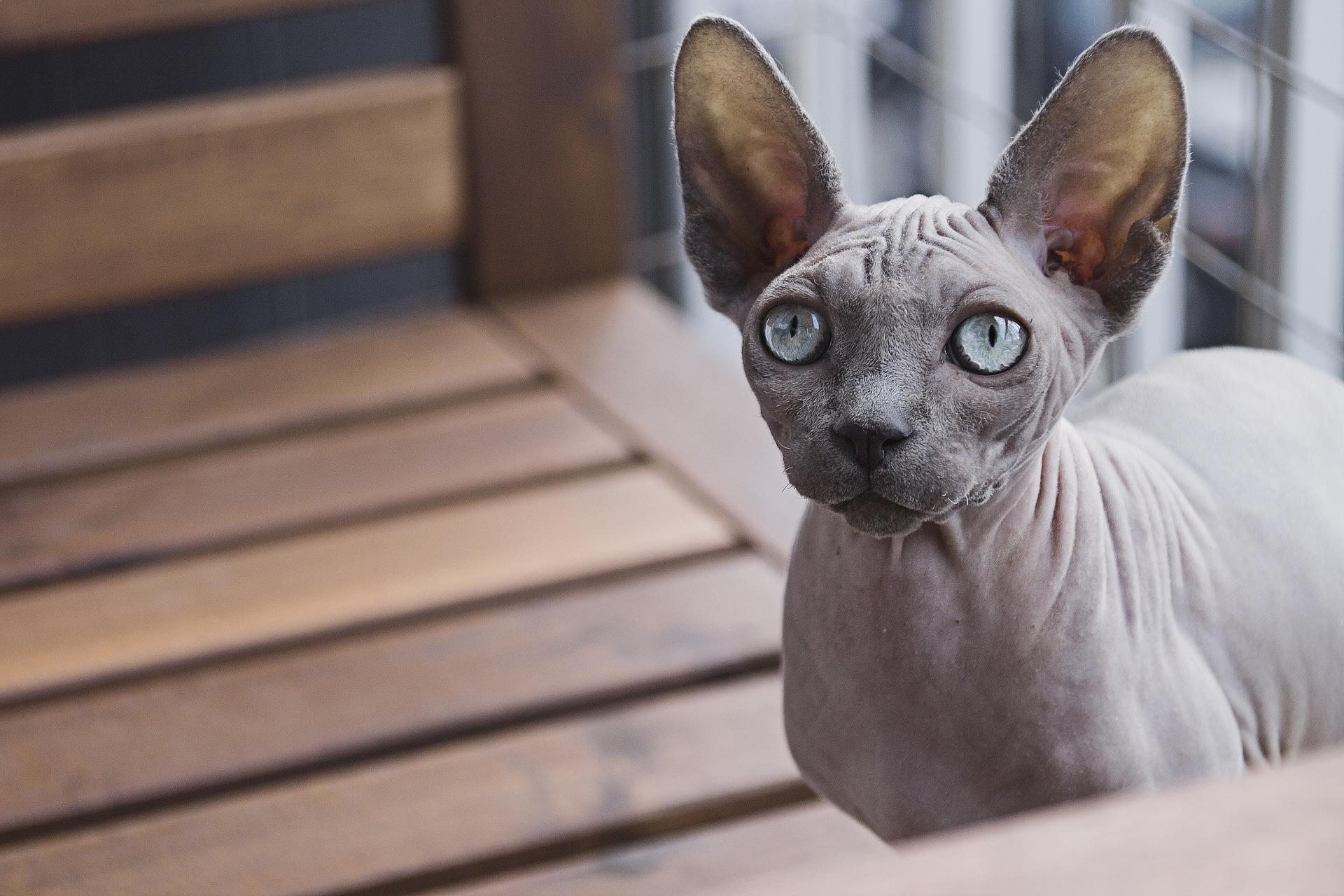 These are the hairless cat breeds in the world. Do post your comments.