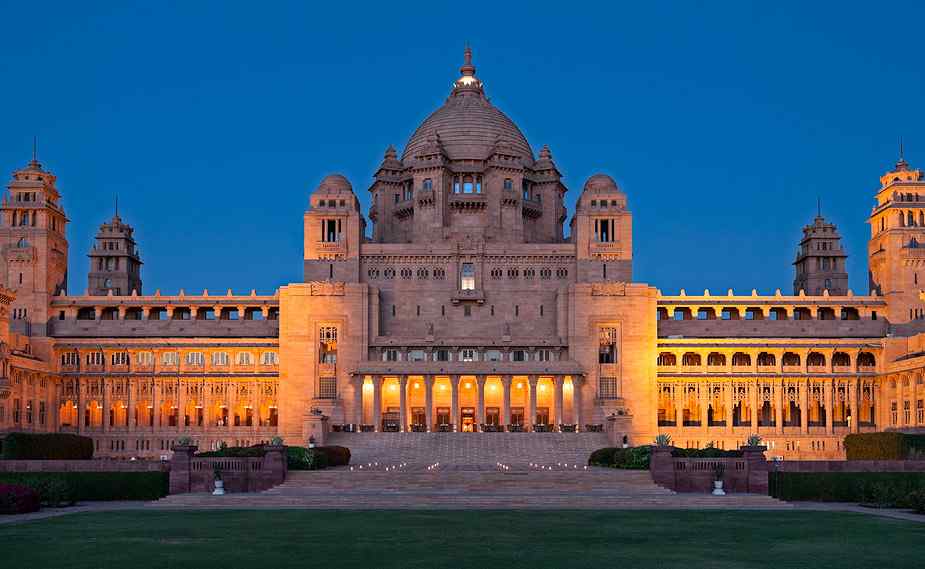 India is famed for its rich cultural history and heritage and houses numerous exceptionally beautiful palaces. Once you come across these architectural wonders, you won’t be able to help but be extremely proud of the grand history and heritage of India. Listed below are the most breath-taking and grandest palaces of Indian states.

One of the most magnificent palaces in the state of Rajasthan, Udaipur City Palace is located in the serene banks of Lake Pichola and is one of the many marvelous palaces of Indian states. Showcasing the culture and heritage of Rajasthan in the best way possible, this fairy-tale-like palace was built atop a hill that provides a panoramic view of the whole city of Udaipur.

The architecture of this palace is one of the best examples of the amalgamation of the Rajasthani and Mughal architecture. Its construction was started by Maharana Udai Singh II of Sisodia, in the year 1553. It then continued to get remodeled by various Mewar dynasty rulers over almost 400 years. It is the largest palace of its kind in the state of Rajasthan.

Popularly known as the Jai Vilas Mahal is a nineteenth-century palace which portrays the intricacies of European architecture beautifully. One of the grandest palaces of Indian states, it was built by Sir Michael Filose under the guidance of Jayajirao to welcome Edward VII. This piece of grand architecture presents various kinds of European architecture amalgamated into one. The first story is crafted according to the Tuscan architecture, the second Italian-Doric, and the third Corinthian. The descendants of the Maharaja of Gwalior, the former royal Maratha Scindia dynasty still reside in this palace.

This breathtakingly beautiful example of the Indo-Saracenic style of architecture was the former residence of the royal family of Mysore. Originally built for the 24th ruler of Wayanad in the year 1912, the Mysore Palace is one of the biggest among the many palaces of Indian states. This structure was however built after the Old Palace was burnt into ashes. After the magnificent Taj Mahal, the Mysore Palace is the most visited palaces in India, with more than 6 million visitors per year. It is also listed as one of the beautiful royal palaces in the world.

Built-in 1835 for the wet nurse of Prince Ram Singh II, the Rambagh Palace was converted into a modest royal hunting lodge in the year 1887, during the reign of Maharaja Sawai Madho Singh. This served as the residence of the former Maharaja of Jaipur until it was turned into a luxurious hotel. It is now considered as the most marvellous and finest heritage hotel in the world as well as one among the many grand palaces of Indian states.

Jal Mahal, which directly translates of the ‘Water Palace’ is situated right at the center of the Man Singh Lake in the city of Jaipur and showcases the architectural grandeur and style of the Rajputs of Rajasthan. One among the many grand palaces of Indian states, the Jal Mahal was built completely using red sandstone and has five stories to it.

Four of which usually remain underwater at the time of the year when the lake is full of water. During this time, only the top floor of the palace is exposed. The Jal Mahal has undergone a considerable amount of damage due to water seepage and water clogging and yet stands as one among the many grand palaces of Indian states.

Located in the old city in Hyderabad near the Charminar, the Chowmahalla palace or the Chowmahallatuu, as it is popularly known, belongs to the Nizams of Hyderabad. The palace was built by Nizam Salabat Jung and was the seat of the Asaf Jahi dynasty.

It was also the official residence of the Nizams of Hyderabad while they were the rulers of Hyderabad. The Chowmahalla Palace was presented with the UNESCO Asia Pacific Merit award for cultural heritage conservation on the 15th of March, 2010. This magnificent palace of the Indian states portrays the intricate detailing of the Nawabi architecture.

Considered as one of the largest private residences in the world, the Umaid Bhawan Palace is located in the city of Jodhpur in Rajasthan. It was built with the initial motive of employing the famine-stricken farmers in the area as a result was built at an extremely slow pace. Named after Maharaja Umaid Singh, the palace has 347 rooms and is currently the principal residence of the former Jodhpur royal family. A part of the palace has now been converted into a hotel by the Taj group, and another part has been transformed into a museum.

The Hawa Mahal, which directly translates the ‘Palace of Winds’ or the ‘Palace of Breeze,’ is completely constructed with red and pink sandstone. It is situated in Jaipur which is rightly known as the city of palaces and holds a place among the many grand and magnificent palaces of Indian states.

The structure was built in 1799 by Maharaja Sawai Pratap Singh on being exceptionally impressed and inspired by the unique structure of the Khetri Mahal. Its unique five floors exterior looks like a beehive with its 953 small windows called jharokhas, which are decorated with intricate latticework. The main motive of the lattice design, however, was to allow royal ladies to observe everyday life and festivals celebrated in the street below without being seen.

The grand Bangalore palace was built on the land that was previously owned by the first principal of the Central College in Bengaluru, Rev. J Garret. The property was purchased from in the year 1873 by the British Guardians of the minor Maharaja Chamarajendra Wadiyar 10.

The palace was built in Tudor Revival style architecture with fortified towers, battlements, and turrets. The interiors have a very elegant wood carving decoration, floral motifs, cornices and relief paintings on the ceiling. The furniture in the palace is neo-classical, Victorian and Edwardian in style — all reflecting the influence of the British Guardians upon the young king.

Popularly known as the Victor Jubilee Palace, the Cooch Behar Palace was modeled after the Buckingham Palace in London. It was built in the year 1887, during the reign of Maharaja Nripendra Narayan. Noted for its elegance and grandeur, the Cooch Behar Palace is a brilliant example of the Renaissance style of architecture in India and therefore, finds its place among the many grand palaces of Indian states.