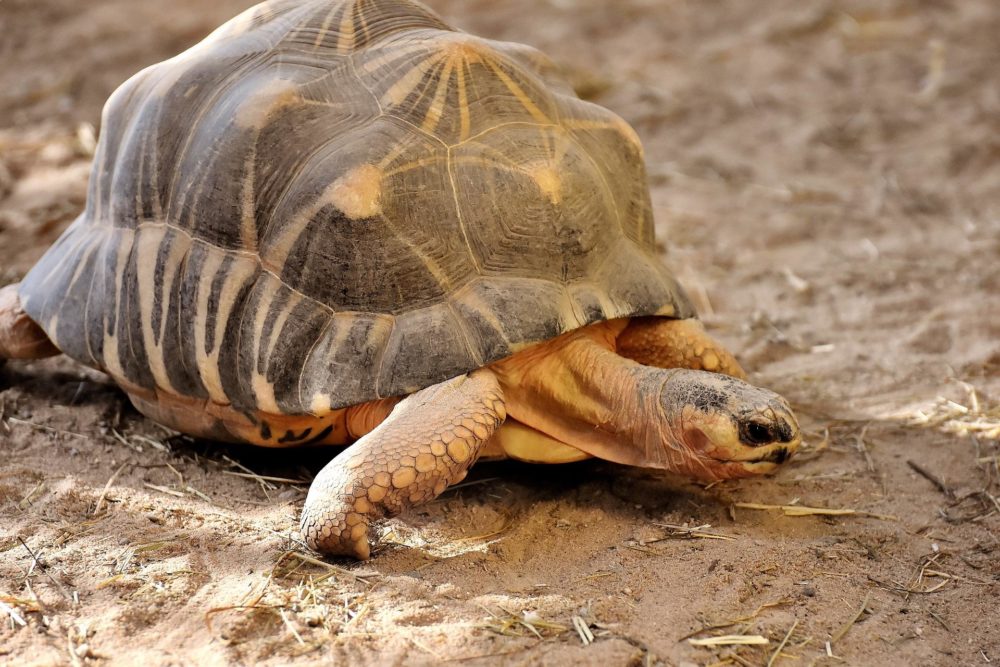 The Galapagos Islands became famous after Charles Darwin landed there to study the animals of these islands and postulate the theory of evolution. Because of a large number of endemic animals, specific climatic conditions on different islands and isolation from the outside world, he could systematically study the impact of specific factors on the morphology of animals. It is one of the best spring break Destinations for animal lovers. Since then, a lot of research has been conducted on these islands taking great care to prevent the introduction of alien species and preserve the unique biodiversity.

This is the largest living tortoise in the world and was one of the first species discovered on this island. In fact, Galapagos Island was named after this animal as Galapagos means tortoise in Spanish. They have an average lifespan of 100 years and the oldest living animal of this species was 140 years old. They are also one of the heaviest tortoises in the world and may weigh over 300 kilos. It is also one of the slowest animals in the world. They are endemic to the Galapagos Island and are endangered, with only 15000 remaining today.

The largest tortoise can reach 4 feet in length and weighs approximately 475 pounds. Talking about the appearance, they have a brown and protective shell around the body. The upper side of the shell is called carapace and the lower part is known as plastron. The shell of the tortoise is an integral part of the body and when the species is threatened it can pull the head and legs inside the shell. The species love to eat grass and thrive in colder climates. One of the longest living animals have no natural predators on the island and can live up to a year without food. Its main source of food is grass, cacti, and leaves. You will also find interesting reading about animals found only in Arctic region. 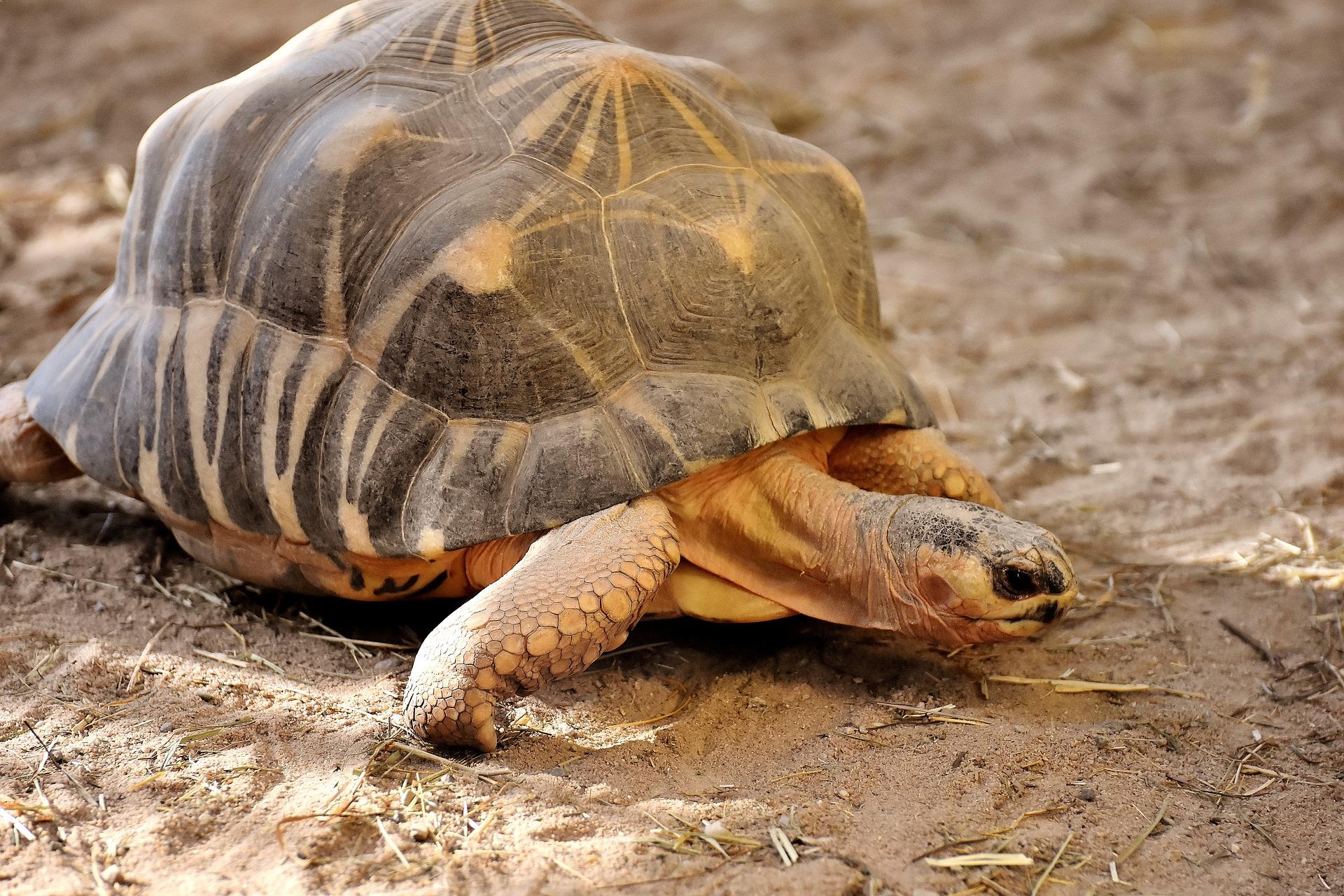 The Marine Equana too is found only on some islands of the Galapagos Archipelago. They are large reptiles weighing up to 40 kilos and are unique because despite being land-dwelling reptiles, they forage for food underwater. They are usually grey in colour but during mating season, change colour to green or red. Because they are cold-blooded animals, they cannot be active immediately after exiting the water. They need to bask in the Sun to regain body temperature in order to be mobile again. They are especially susceptible to predators like raptors and seabirds during this time. We have also listed about Aquatic animals with mind-blowing superpowers.

The unique feature about marine iguana is the spikes that can be seen all down their back and tail. The species can grow upto 4 to 5 feet and weight approximately 1 to 3.3 lbs. The marine Equana sneezes because they eat salt through sea water and they need to get out the excess salt so that they will not hurt its intestine. Also, the species will not be able to breathe underwater because they don’t have gills like a fish but they can hold there breath for a good amount of time. Approximately, it can hold its breath for 30-40 minutes and sometimes longer. 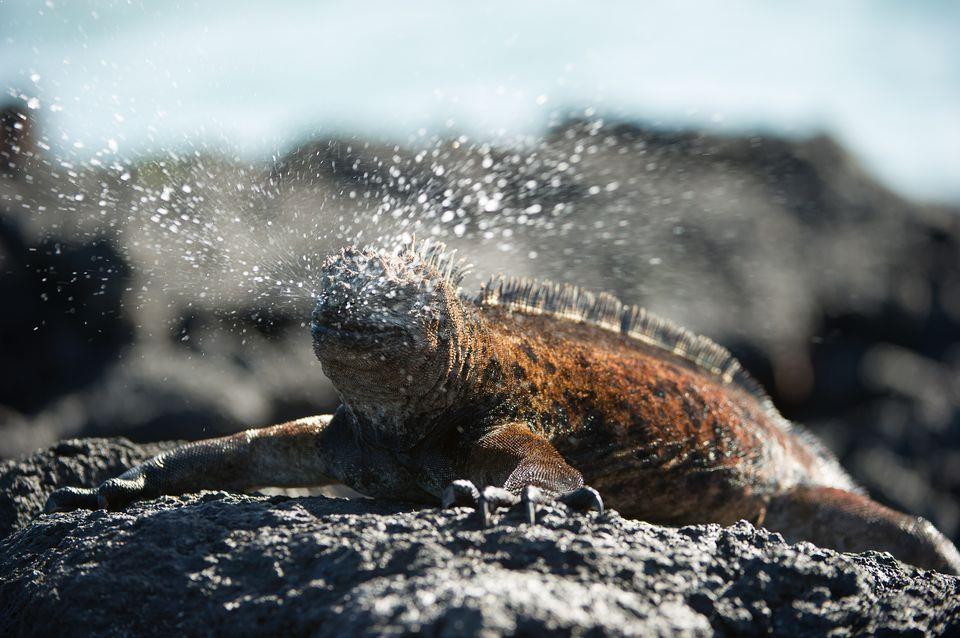 These animals are the smallest fur seals in the world and are found on most of the islands of the Galapagos Archipelago. Today, there are about 40 thousand individuals of this species in the wild. They spend a majority of their lives in the sea and can be distinguished from other seals by their small size, pointed nose and thick fur. Both males and females are brownish-black in colour and males become very aggressive during mating season to protect their territories and compete with another male for mates. You will also love reading about strange animals found only in Africa.

Off all the species of seals, Galapagos Fur Seal is the one that spends most of their times on land. The species approximately 70% of the time on land and can dive to depths about 100 ft. If you visit Galapagos islands in the day and see a Galapagos Fur Seal taking a nap because they need to hunt at night for food near the water surface. They make strange noises while hunting and the experts believe it is because of the foraging efforts of the species. 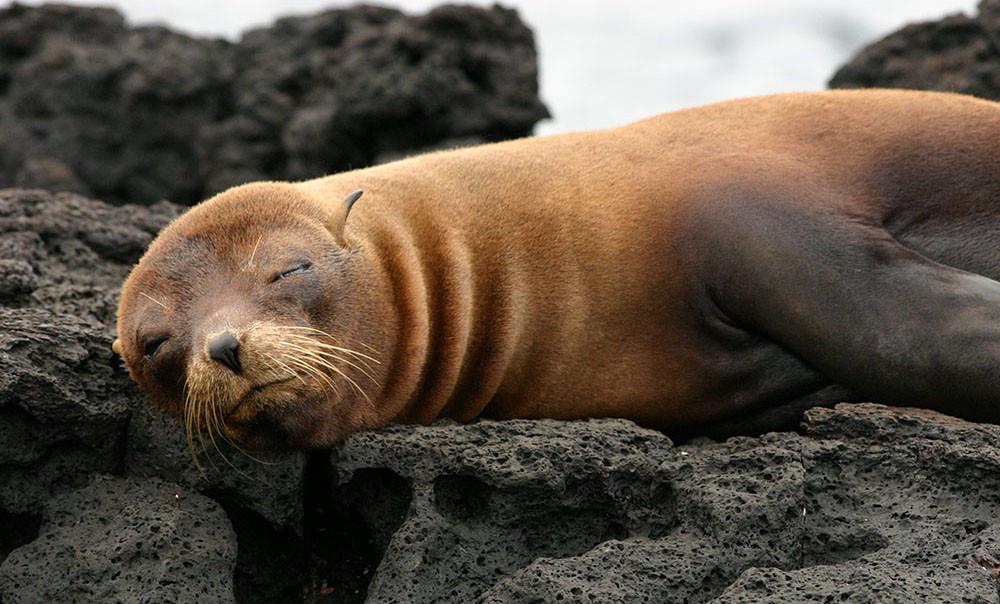 This penguin is one of the smaller penguins in terms of individual size and population size. They are able to survive on the Galapagos Islands because of the cool ocean currents that allow the penguins to be in the cold water throughout the day and return to warmer land at night. They can be easily identified because of the white line around their face and large curved beak. They lay eggs close to the shore and chicks hatch between 30 and 40 days.

The smallest species of South American penguins can grow upto 19 to 20 inches in height and weighs approximately 4.4 to 8.8 pounds. Talking about the appearance, the species has a black plumage on the head and on the dorsal side of the body. White plumage on the belly can be seen along with white lines on teh corners of the eyes to the base of the throat. 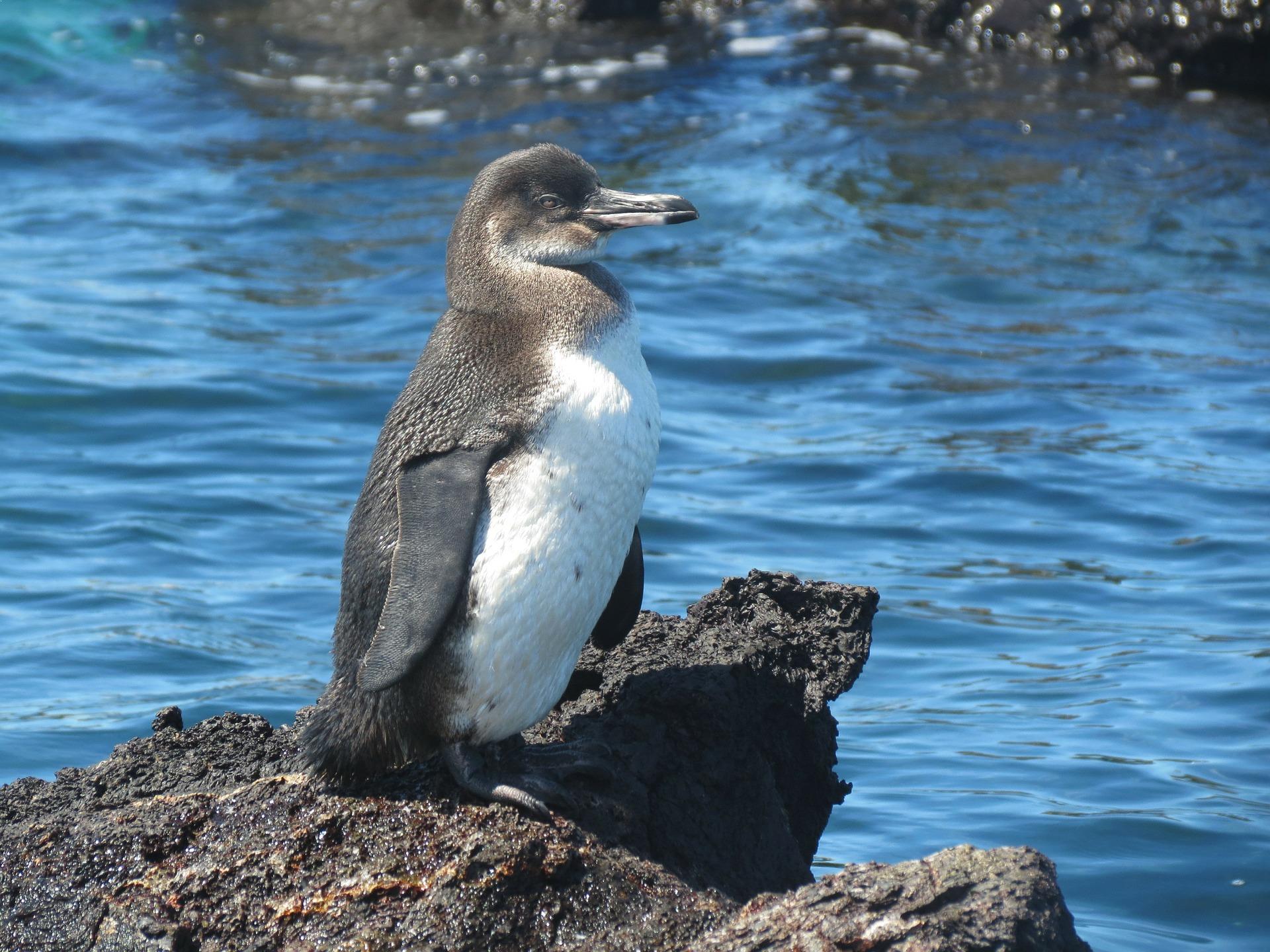 This is one of the apex predators on the Galapagos Islands and is a large raptor with brown to black plumage. The males are slightly smaller than females and their population to is limited with only about 130 breeding grounds documented to date. They are diurnal meaning that they hunt during the day, usually in pairs or groups of threes. They feed on smaller animals and birds as well as carcasses and eggs of other birds. Their sharp talons and beak help them during hunting. Also, read about the most amazing eyeless animals in the world. 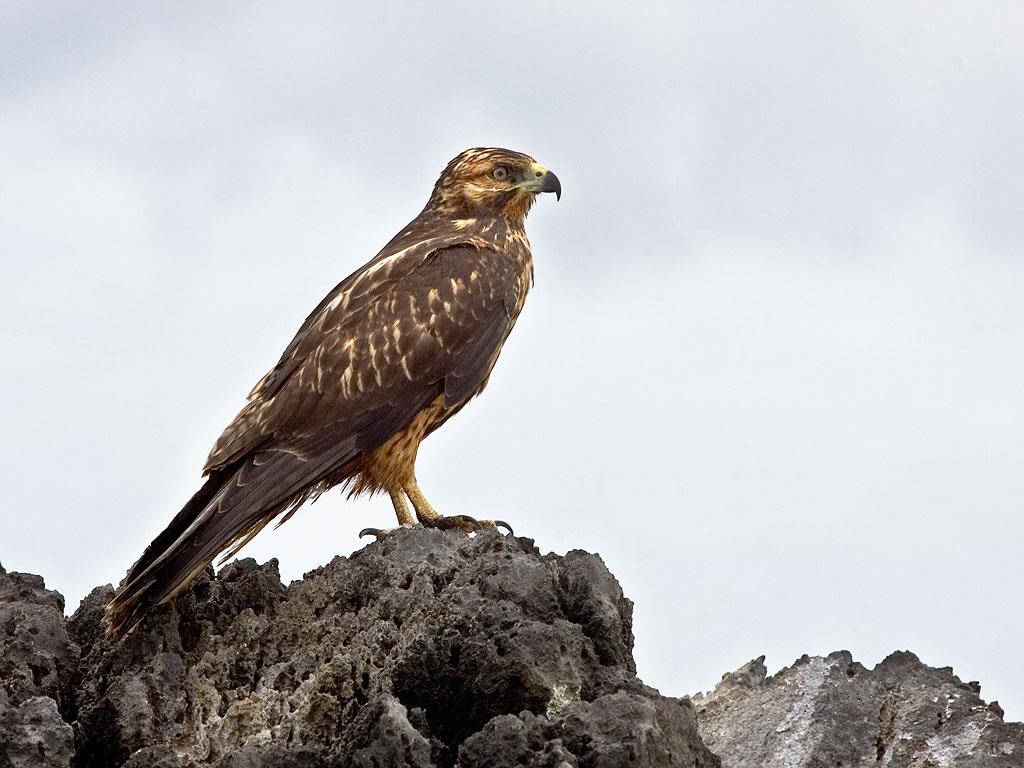 As the name suggests, this cormorant has lost its ability to fly and is the only flightless subspecies of the Cormorant. Their population has declined drastically in the past few decades and currently, there are less than 800 birds left in the wild. Since they cannot fly, they are very well adapted to swimming and hunting fish underwater. The webbed feet, waxy wings, long legs and sharp beak aids in catching underwater prey. 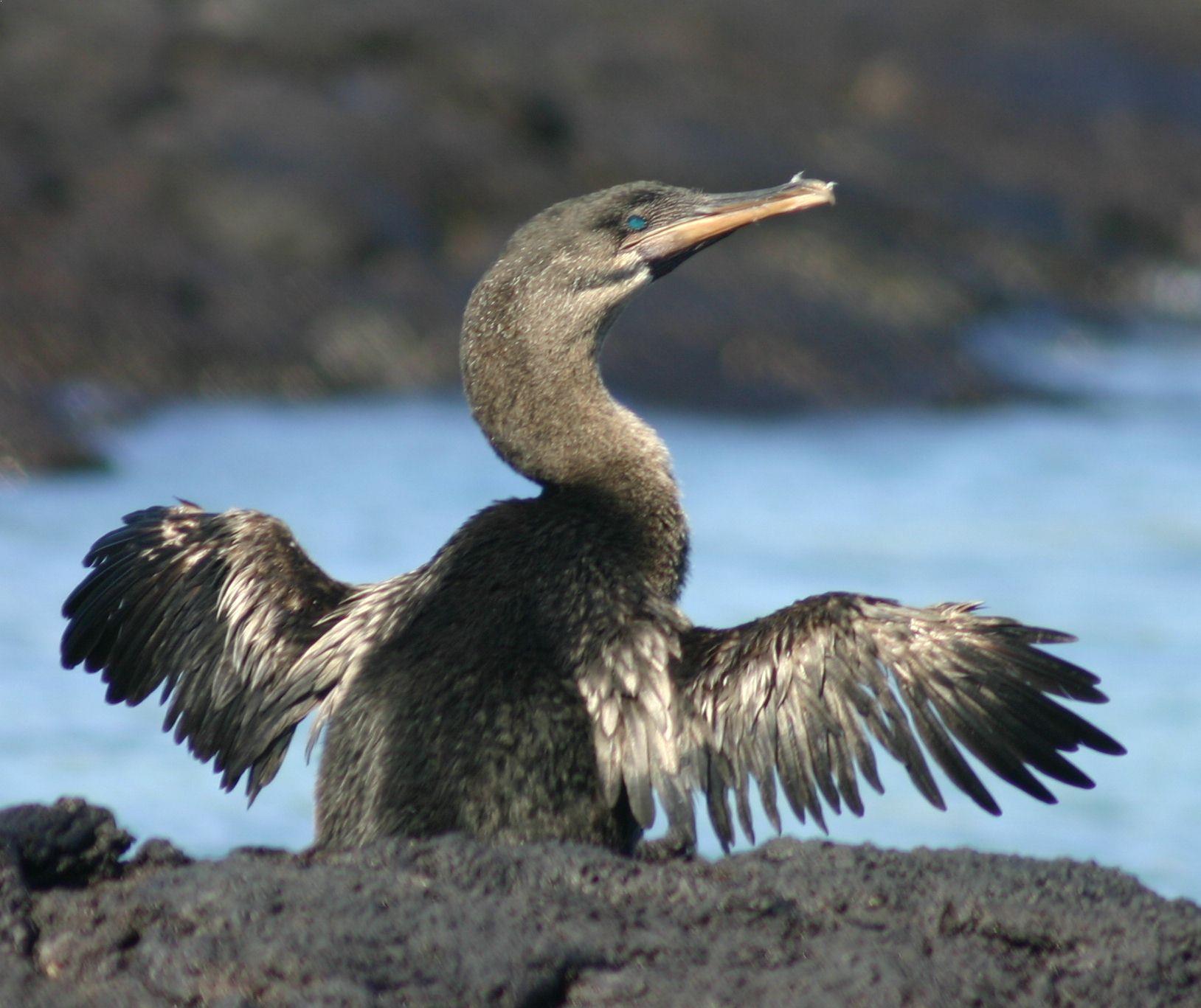 Four species of mockingbird have been identified till date on the Galapagos Island and they have an average size of 25 to 2Mockingbirdes. All four species have long legs, long tail and a long beak to help them in hunting. Their calls are distinctive and melodious. Each species can be identified by its different call. These birds do not fly much and prefer to hop and use their feet to travel. They are omnivorous and eat anything from fruits and leaves to eggs, small reptiles and offspring of other animals like turtles. 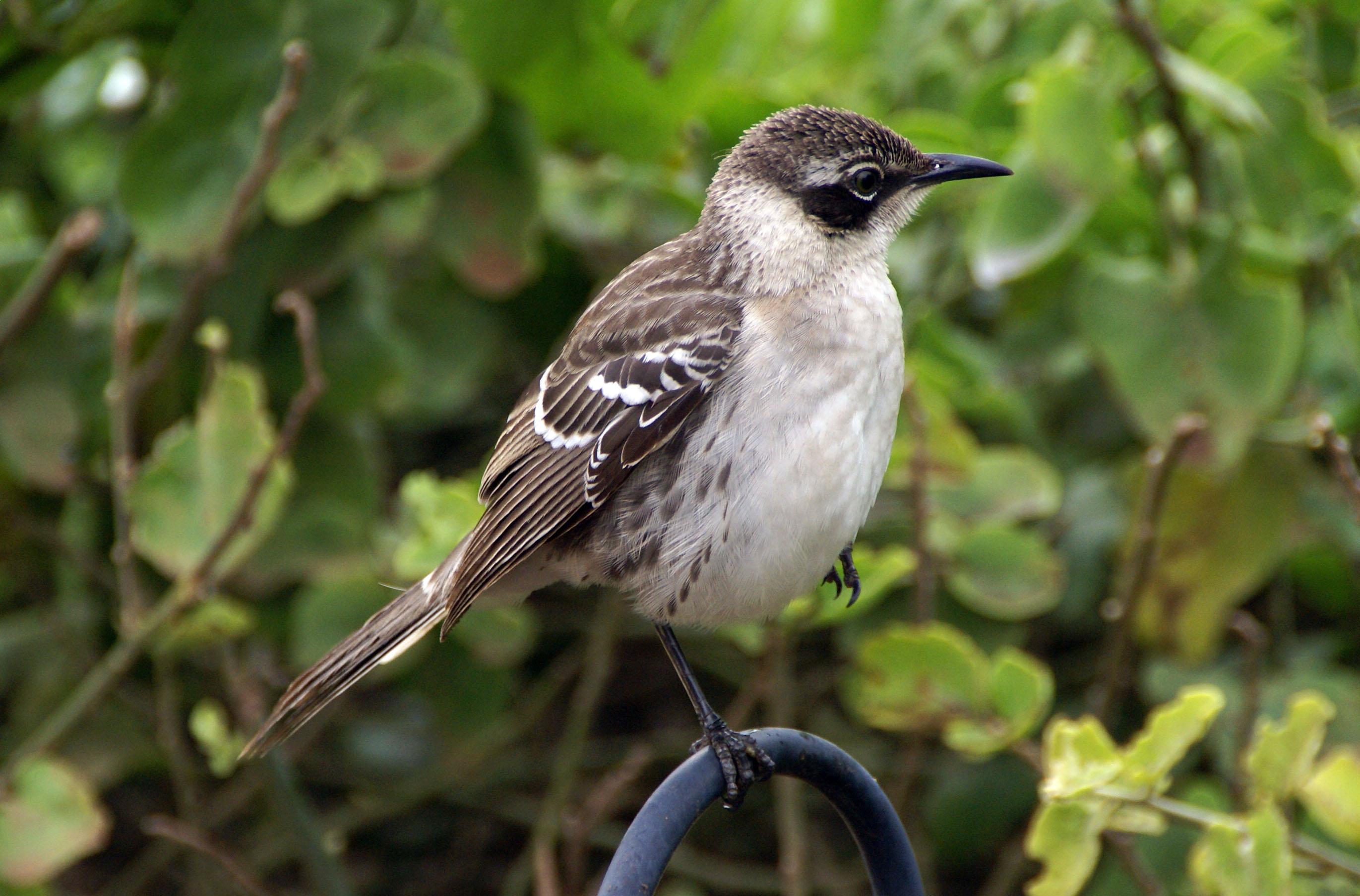 Darwin’s Finches, also known as Galapagos Finches are small birds that live near the ground and inhabit all islands in the Galapagos Archipelago. They are famous for having sparked the idea of evolution in Darwin’s mind and he studied these birds, observing their anatomy and behaviour to postulate the effects of environment on evolution. These finches do not belong to any existing bird family. There are 13 different species of this bird on a different island each with slight morphological variations. Depending on their food habits and surroundings, they have evolved different shapes of beaks that were studied by Darwin.

These insects are found only on one of the Galapagos Island – the Ecuador Island. They are very colorful with intricate patterns on their body, wings and legs. They are relatively small and can grow only up to 8 centimeters. They are prey for hawks, lizards and other large birds. Also, please read about facts about Antarctica you didn’t know. 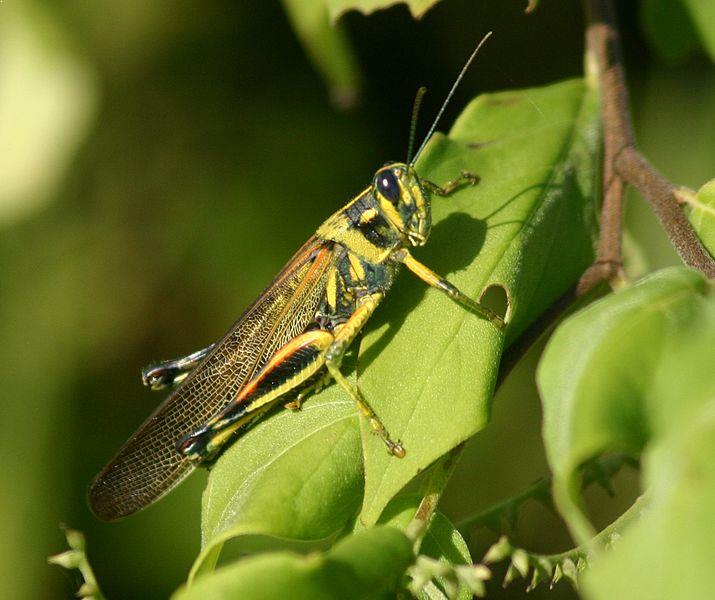 This reptile lives on some of the Galapagos Islands and is found on rocky surfaces. There are seven subspecies of the Lava lizard and each of them is found on different islands. Their appearance and behaviour are slightly different depending on their environment and feeding behaviours. They can grow up to 30 centimetres with the male being heavier than the female. During the mating season, both males and females aggressively protect their territories. Usually, Lava Lizards have a thin body and long tapering tails. They feed on smaller insects, spiders and ants and may live up to 10 years. 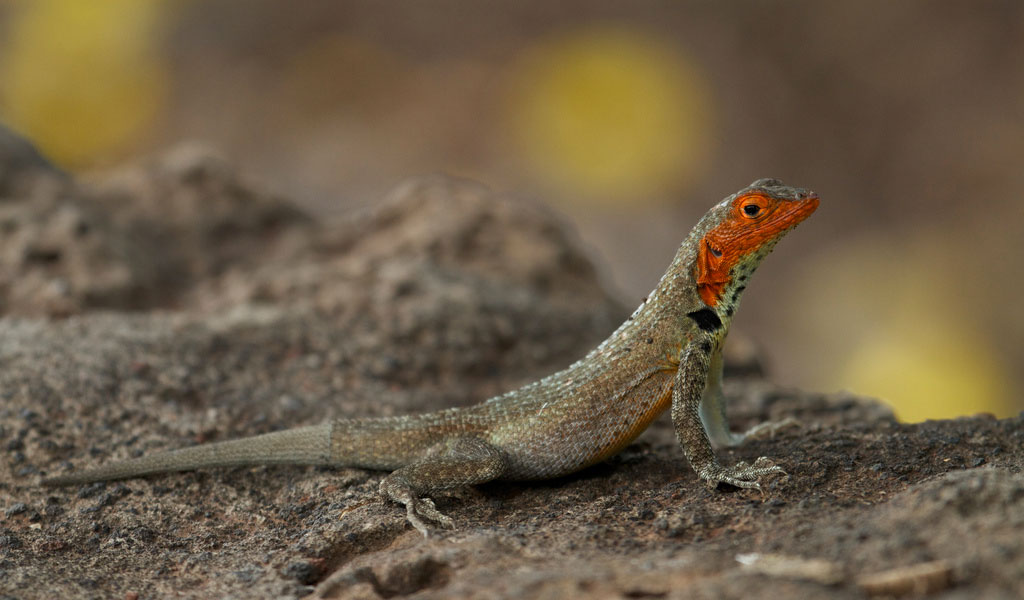 These animals, endemic to the Galapagos Islands are extremely threatened by the external influence that may disrupt the ecosystem of these islands. The tourist activity on these islands has been limited to protect the animals and avoid their extinction. They are however being adversely affected by climate change and pollution. Now you know about epidemic animals of  Galapagos Islands.