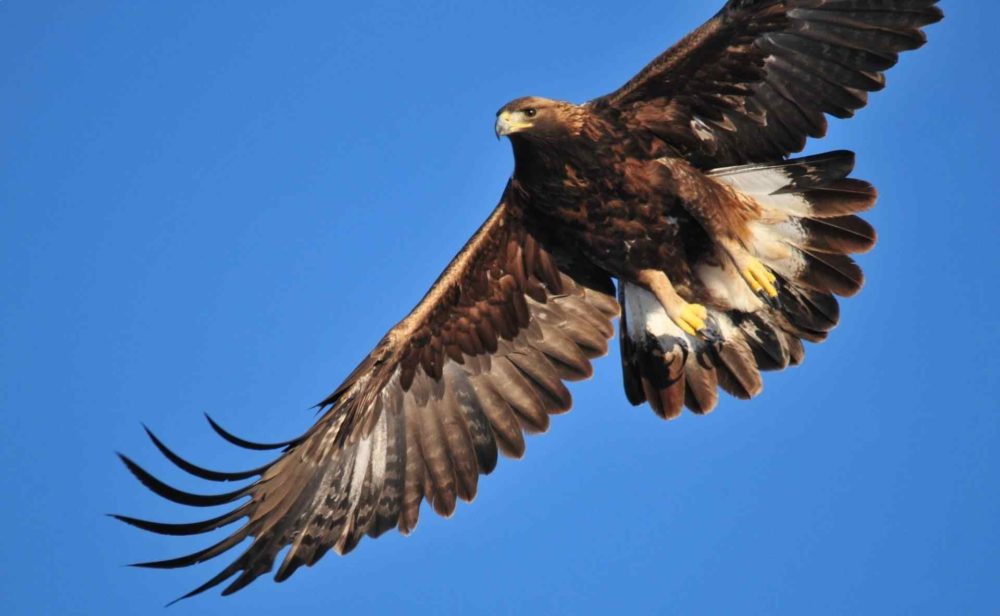 Aeroplanes may be very fast, but with the jet engines and superior fuel, it is no surprise that it can fly so fast. These birds, however, use only the power of their muscles and the skill to navigate air currents to achieve great speeds. In fact, the fastest bird is also the fastest living creature and this is a testament to the extent to which the ability of flight has evolved in birds to help them adapt to their conditions. Here is our list of the 10 fastest birds in the world.

This is not only the fastest bird but also the fastest living creature on earth. It flies at great heights searching for prey which mainly consists of smaller birds and when it sees such a bird, it dives almost vertically, achieving great speeds to attack and kill its prey. Its greatest speed is achieved during this dive – reaching up to 242 miles per hour and the prey dies instantly because of the speed of the dive. The Peregrine Falcon is a very common predator found on all continents except Antarctica and is also kept as a pet or as a hunting bird.

The bird species can grow upto 14.2 to 19.3 inches in length and 18.7 to 56.4 ounces of weight. Talking about the appearance, it has bluish-black or slate grey backs with wings covered with dark stripes. The bottom side of the body is white or sometimes rusty-coloured and covered with brown spots. The carnivorous bird loves to eat songbirds, ducks, bats, rabbits and rodents. During the process of catching, it catches its prey in mid-air or collects it from the ground. The bird has a lifespan of 20 years in the wild.

This majestic bird is the largest raptor living in North America apart from being one of the fastest birds in the world. Like the Peregrine Falcon, it achieves its highest speed during a dive while catching prey. It is a large powerful bird which weighs about 7 kilos and has a wingspan of 2 to 3 metres. Because of the well-developed flight muscles, it can soar in the air for a long time searching the surroundings for prey. The Golden also find a place in the national emblem of the United States. Eagles are one of the best flying animals in the world.

The golden eagle is the most widely distributed species of eagle, belongs to the family Accipitridae. Talking about the appearance, it has feathers range from black-brown to dark brown, however, it has golden head and neck and hence the name. One of the fastest birds is long-lived with a lifespan of 38 years in the wild and 50 years in captivity. Golden eagles have large eyes and it makes the most of its head and keen eyes play an important role in locating the target from long distances. It usually flies hundreds of kilometres without stopping in search of food. 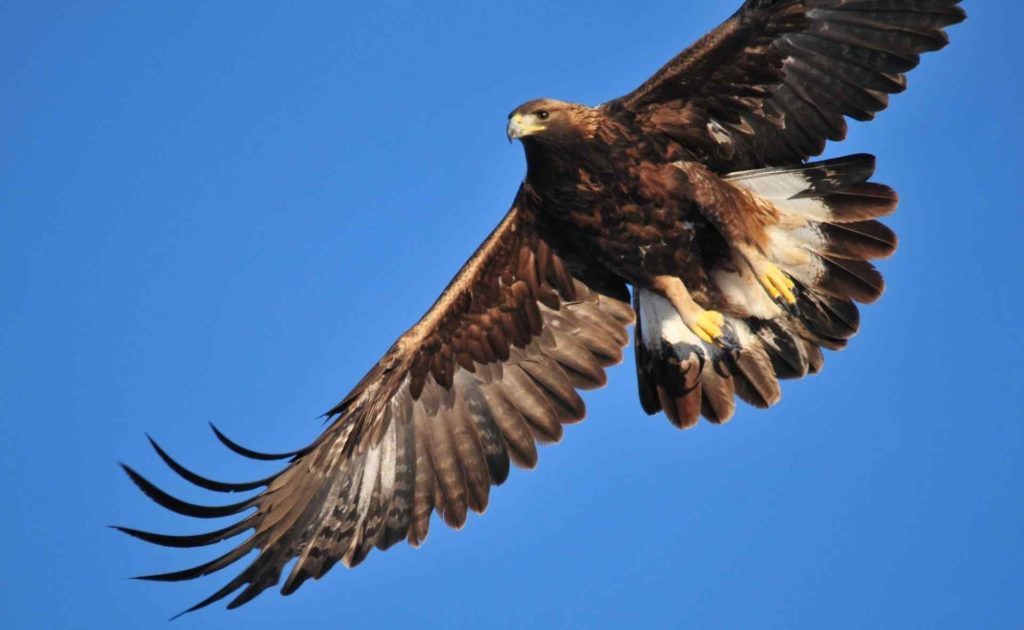 The Gyrfalcon is the largest species of falcon found in the world and is also a very skilled hunter. It dives from a great height to swoop down on the prey and has unbelievable control over the speed and direction of the dive. By altering the direction of the wings, it can increase or decrease its speed midway into the dive to increase its chances of catching prey. The peak speed of this bird is 130 miles per hour and it is also used as a hunting bird.

The largest falcon in the world mostly seen in the Arctic and subarctic regions of the northern hemisphere. It loves to prey on ptarmigan, however, it is known to other animals such as ducks, fulmars, jaegers, gulls, sparrows, redpolls, buntings, Short-eared owls and hawks. Also, it is been seen hunting hares and voles. Scientifically known as Falco rusticolus, Gyrfalcon has a wingspan of 123 cm and approximate lifespan of upto 25 years in the wild. The needletail is a species of the Swift and lives in Siberia and some parts of Asia in the hilly and cold regions. It is one of the largest birds in the swift family and can reach a maximum speed of 105 miles per hour. It is also the fastest flying flapping bird since the other birds like falcons and eagles do not flap their wings continuously during flight and use the gliding technique. This is a migratory bird and during the winter travels to South Asia and Australia to escape the cold weather of the northern regions.

Talking about the appearance, the White-throated Needletail is mostly grey-brown in colour and wings are long and pointed. The tail of the bird species is shorter and square in shape with protruding feather shafts giving a spiky appearance. Initially, it is known as the Spine-tailed Swift but now it is placed as per the own genus. Sometimes, it is also known as Storm-bird or Stormbird. They are seen in large numbers over eastern and northern Australia. It loves to eat insects, such as termites, ants, beetles and flies. 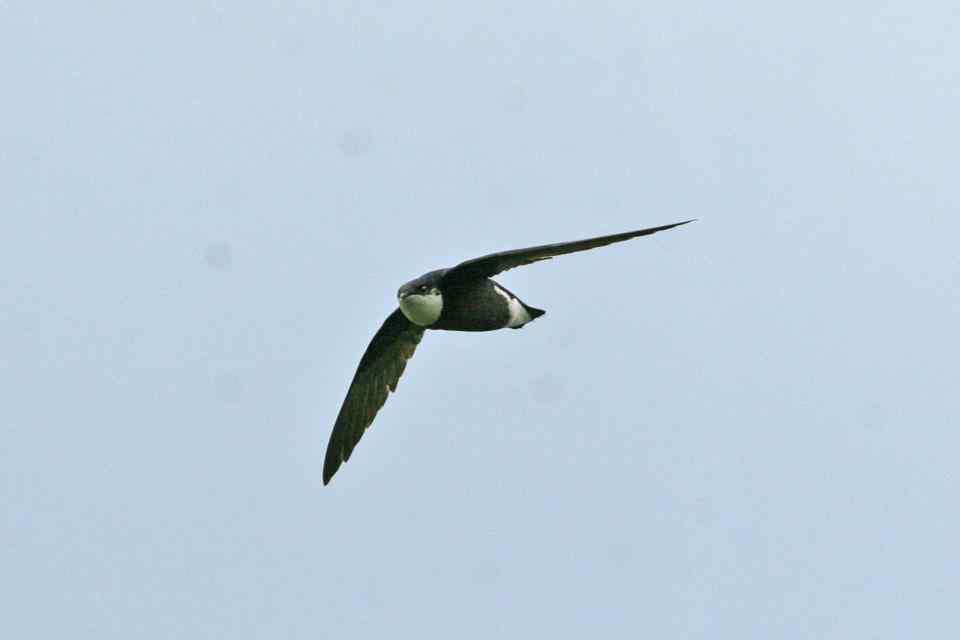 This raptor is commonly found in many parts of the world like Africa, Europe and Asia in woodlands, beside rivers and in forests. Since it belongs to the falcon family, it has a similar body structure and hunting behaviour. It can reach a speed of 100 miles per hour and is known for its acrobatic dives and flying manoeuvres. The Hobby migrates great distances to go to South Asia and Central Africa during the winter.

The bird species can grow upto 29 to 36 cm and have a wingspan size of 74 to 84 cm. It loves to habitat in open country including farmland, marshes, savanna and taiga. It mostly preys on dragonflies, beetles, moths, grasshoppers, locusts, crickets and ants and mostly eats insects while flying holding them into talons to dissect and eat. Sometimes it is also seen eating bats and lizards. This is a large coastal strange looking bird living in the tropical regions of the world and is one of the fastest birds in the world. It has a large wingspan as compared to its body size and can stay in flight for almost a week at a stretch. It has a maximum speed of 95 miles per hour but cannot walk or hop well on land. Even if the prey is very nearby, the frigate bird glides and swoops to catch its prey. 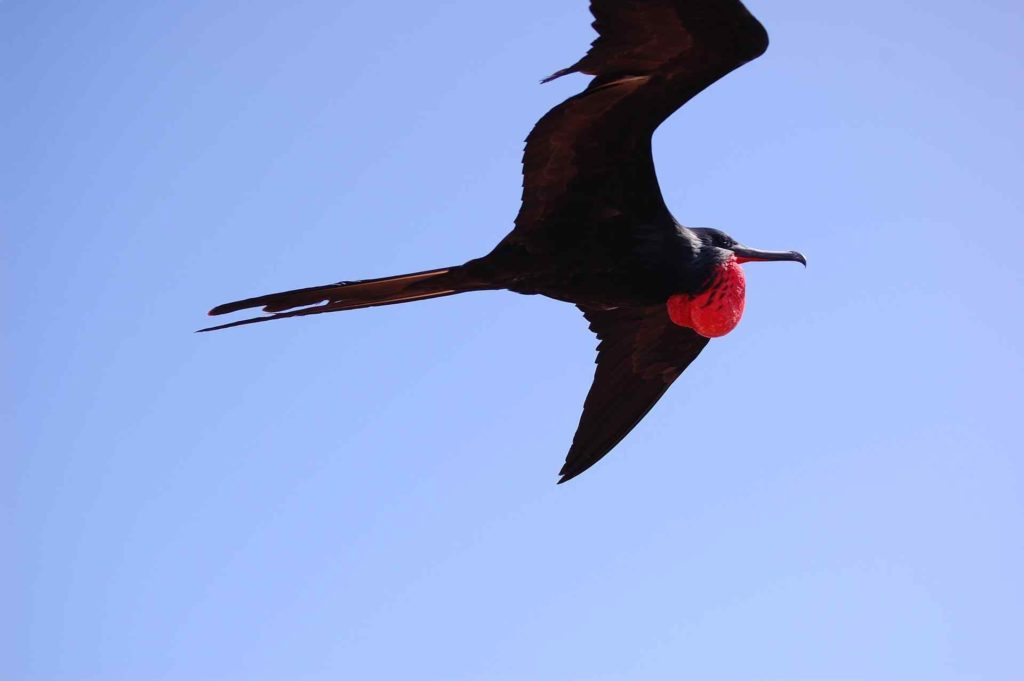 The spur-winged goose is one of the largest waterfowl in Africa and weighs up to 7 kilos. It has a large wingspan that helps is achieve great speeds of up to 88 miles per hour. Despite its large size, it is the fastest goose in the world and this helps during its long winter migration. 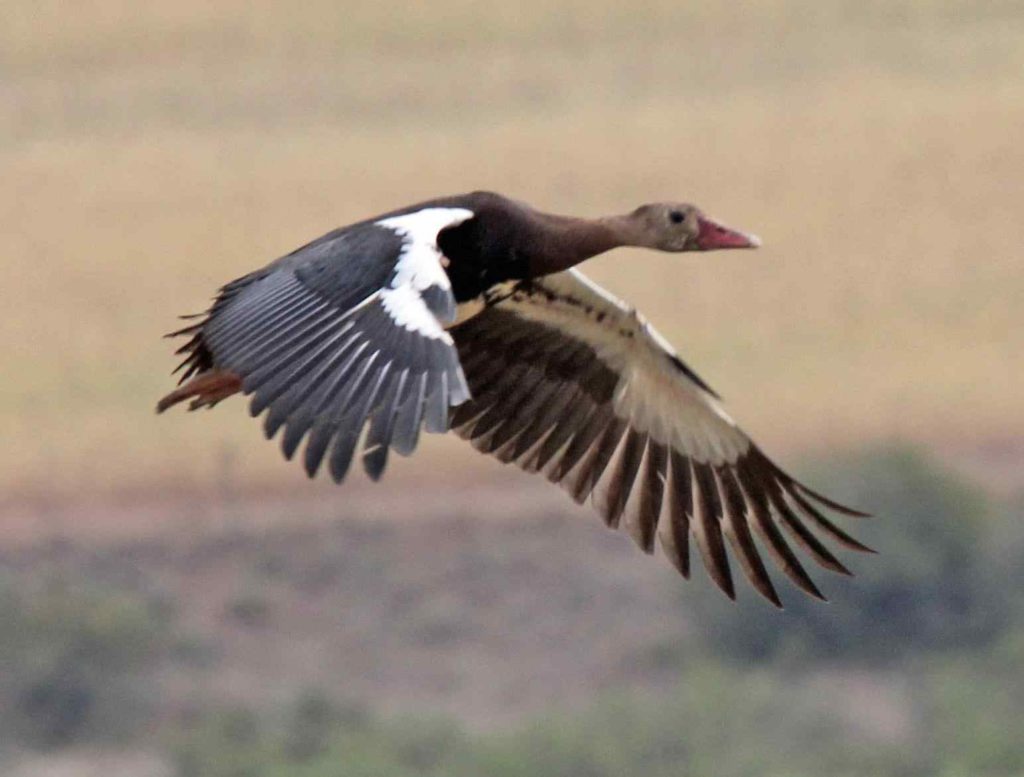 This bird is a diving duck that lives in North America and has a distinctively sharp red beak as well as tufts of feathers on its head. It has a large wingspan and it migrates to Alaska and Northern Canada during the winter. During this migration, it achieves a maximum speed of 81 miles per hour. In the winter, the merganser breeds near water bodies like lakes, marshes and wetlands in Northern Canada and the female lays about 10 eggs per year. After the chicks have hatched, this bird returns to the North American mainland. 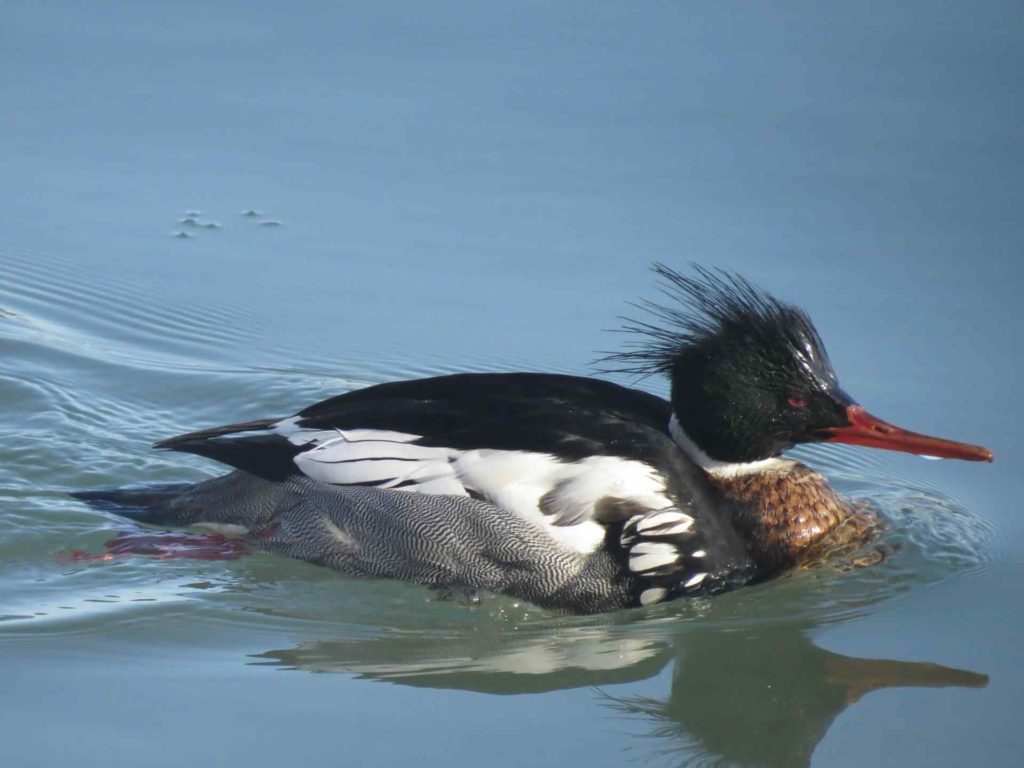 The albatross family consists of large coastal birds that are adept fliers and can travel great distances using their powerful wings and the wind conditions around them. The grey-headed albatross so named because of the bluish-grey head lives on the coast of the South Atlantic and can reach a top speed of 79 miles per hour. Its regular flight speed is well over 60 mph and it can fly long distances using the wind currents. 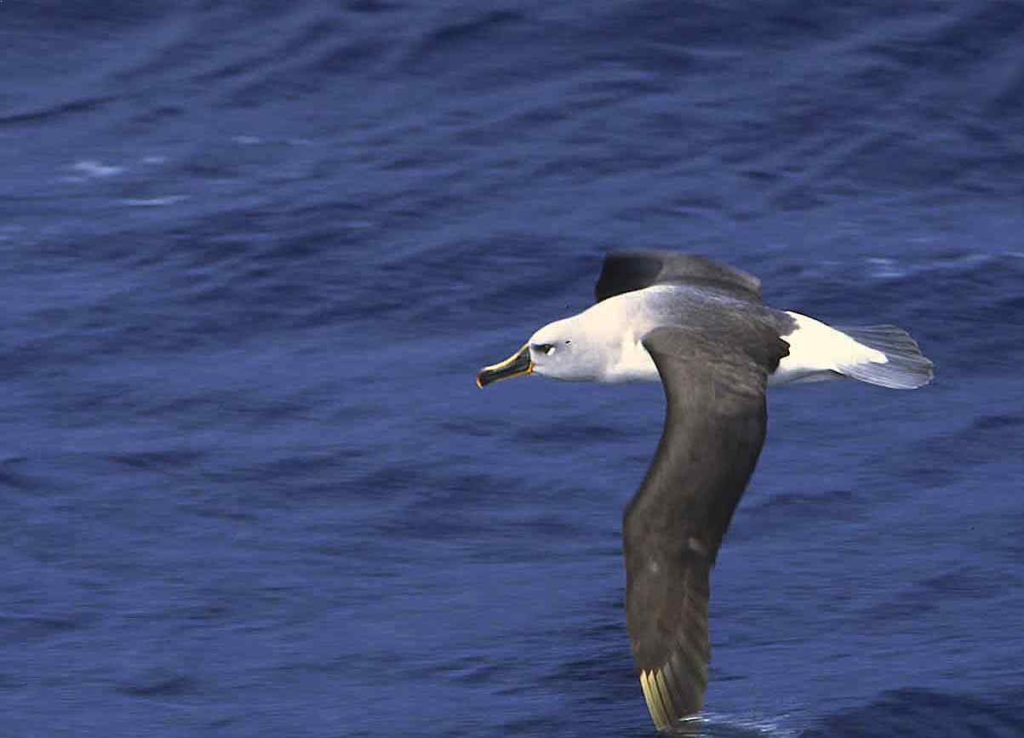 This duck lives across North America mainly in marshes and swamps and has a maximum speed of 73 miles per hour making it one of the fastest birds in the world. It has a wingspan of 34 inches and is not a very large bird. It is famous for the V-shaped migration pattern it follows in its flight as a flock. Every year, it migrates to the Great Lakes in the winter and attains its maximum speed during this flight. 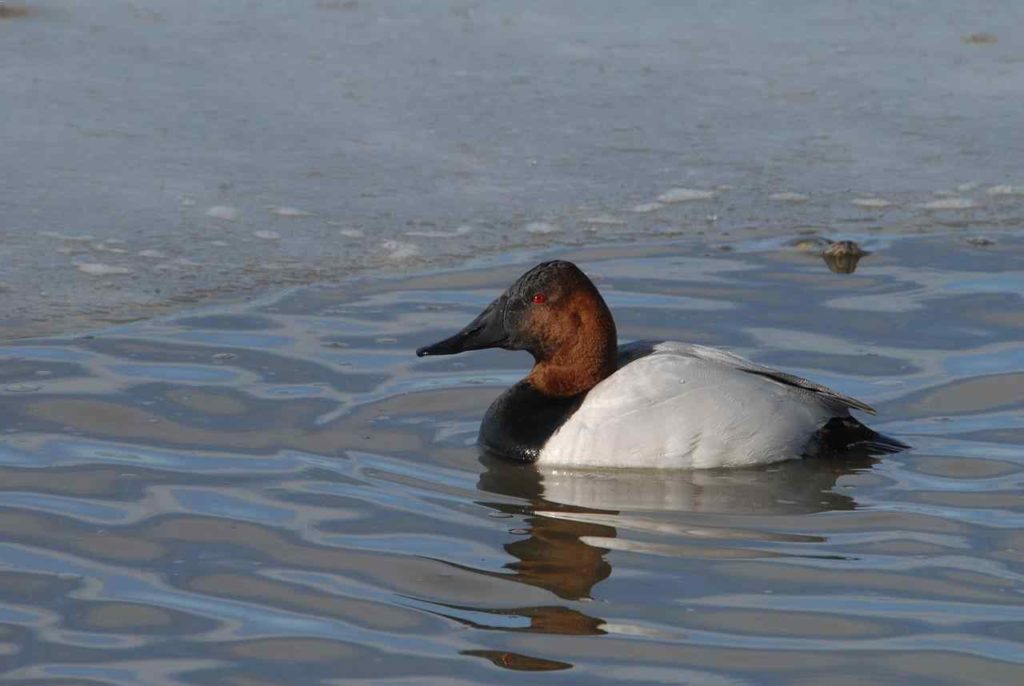 Have you ever imagined what it would be like to be able to fly this fast using nothing but your natural ability? The human fascination with flight has led to great inventions like aeroplanes and rockets and perhaps a deeper study will help us make this technology more environment-friendly and effective. These are the 10 fastest birds in the world. Do post your comments.