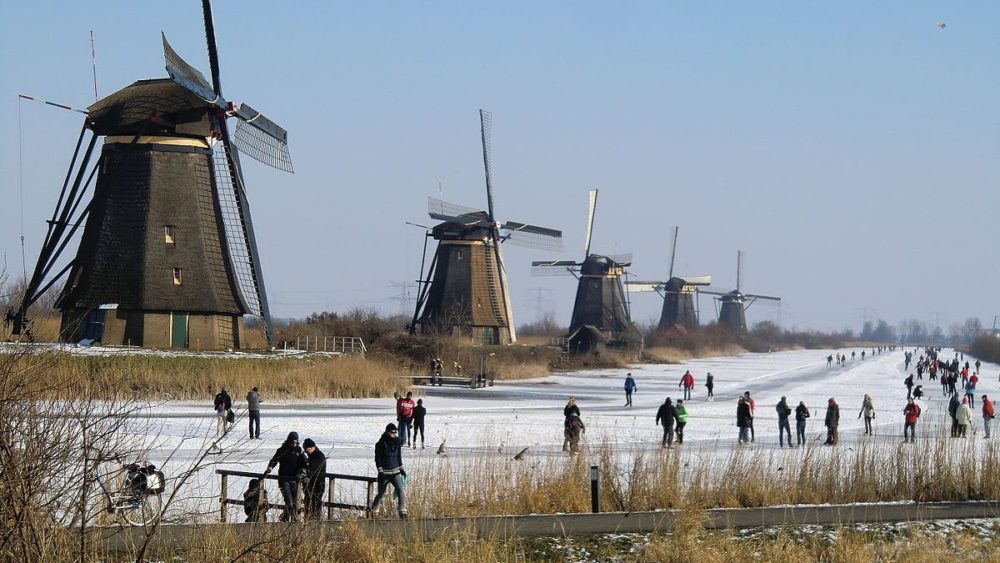 Windmills are basically designed to convert wind energy into an advantageous form, for example, generate electricity by converting wind energy to electrical energy. The wind is nothing but the kinetic energy of air in motion. More the agitation in the air more is the energy. Large wind farms are made up hundreds of individual wind turbines which are hooked up to the electric power transmission network. Wind Power has a minor environmental impact when compared to traditional sources of power as it causes less pollution. Wind power consumes no fuel and emits no air pollution, unlike fossil fuel power sources. Let’s learn more about the most famous old windmills in the world that exist on this earth.

The Windmills of Mandraki Located in Mandraki Harbour in Rhodes, The Windmills of Mandraki, resides on a wave breaker. These middle-aged windmills were helpful in pulverizing grains that were transported through commercial ships which were docked in the harbour. As per the believers long time ago there were 13 or 14 windmills, but almost all of them have dismantled and crumbled over time.

Among these admirable structures, three have been modernized and stand as the dignified significance of old times. Today Mandraki is an important tourist place having plenty of seaside cafes with a view of the yachts and fishing boats.

Exquisitely honoured by the wind, the windmills make a mural of Oland its best silhouette. In the mid-19th century, Oland was blessed with around 2,000 windmills and the number was considerably unchanged at the turn of the century. By this time it was almost indispensable for every self-respecting farm to have its own windmill as animal farming was increasingly prevalent.

Of the approximately 2,000 mills on the island during the 19th century, only about 355 remain today. At the start of the 20th century, the windmills started annihilating. The old farm was renovated with new technology bringing in very efficient commercial mills. Examples of famous windmills on Oland are the row of mills in Lerkaka, regarded by many as the most beautiful and best preserved on Oland.

Residing in the north of Amsterdam is the Zaanse Schans which exhibits an impeccably preserved glance of the Netherlands’ history. It is an amalgamation of its conventional houses, windmills, workshops and warehouses. During the 18th and 19th centuries, this area held prominent industrial importance because of its hundreds of windmills which were used for the production of linseed oil, paint, snuff, mustard, paper and other products.

Numerous Zaanse Schans’ peculiar village dwellings have now been turned to museums, gift shops or workshops. A few of the condos are still accepted as private residences. The leftovers of Zaanse Schans’ windmills are also open to the public and around millions of visitors drop in to enjoy it’s beauty every year. It is considered to be one of the Netherlands’ most adored attractions.

Fairly popular among the tourists, windmills are an exemplary aspect of the Greek island of the Mykonos. The windmills are evident from each spot of Mykonos’ main village, which is known as Chora. While sailing towards the harbor of Alefkandra the first thing which can be seen is the windmills as they reside on a cliff dominating the area.

Almost all the windmills gaze the North where winds are strongest over the most part of the year. 16 windmills are present currently on Mykonos out of which seven sits on a prominent hill in Chora. Venetians constructed many windmills in the 16th century, but construction continued into the early 20th century. Mainly these windmills were used to grind wheat hence being one of the most important sources of income for the inhabitants. As technology kicked, their use gradually decreased.

Known for its windmills, Consuegra is a city in Spain. The first windmill was built here in the 16th century. On this land once about 32 mills stood but now only a total of 10 of them are left in the region. Out of these 10, three mills date back to the 16th century (Burrito, Infante, and Sardinero). The others were constructed during the 20th century. These windmills were primarily used to grind wheat.

After the 1980s, the windmills were no longer being used for grinding grains. Surprisingly one of them is now used as an ice-cream shop. One of the other windmills hosts a tourist office giving you a chance to step inside. The view around the windmills is breath-taking especially during the autumn when the fields around turn purple. During this season every year, one of the windmills is set into motion to celebrate the harvest of the saffron crop.

A network of nineteen windmills was engineered around 1740 to empty the polder of Kinderdijk and encompassing polders. Polders are areas of land below sea level that are protected by dykes. The windmills are present in proper rows along with an L-shaped drainage canal, where they used to pump water from the nearby polders. This continued until steam and electric pumps offered more reliable protection against flooding.
This cluster of mills is the most enormous accumulation of windmills in the Netherlands.

And obscurity within the world you may notice as several windmills as there are in the village of Kinderdijk. These windmills are maintained and preserved by the foundation known as “Wereld Erfgoed Kinderdijk”. The preservation isn’t restricted only to the windmills, but also covers the area in which the windmills are situated. The windmills secure a place in the list of UNESCO’s World Heritage Sites in 1997. The 19 windmills at Kinderdijk symbolizes the means during which the Dutch have managed the water.

The windmills in Nashtifan, Iran are said to be the first windmill designed across the globe. They are in use from centuries. These windmills are described by the vertical wood blades and horizontal rotation. The place is also popular for the wind that blows 120 days in a year across the region and supplies the required energy to run the windmills. These windmills were built by the use of natural clay, straw, and wood. These were used to grind grains for flour for an approximate of 1,000 years. Because of the strong winds that blow through the venue, Nashtifan’s was originally known as “Nish Toofan” which means “storm’s sting”. It is considered as a national heritage site.