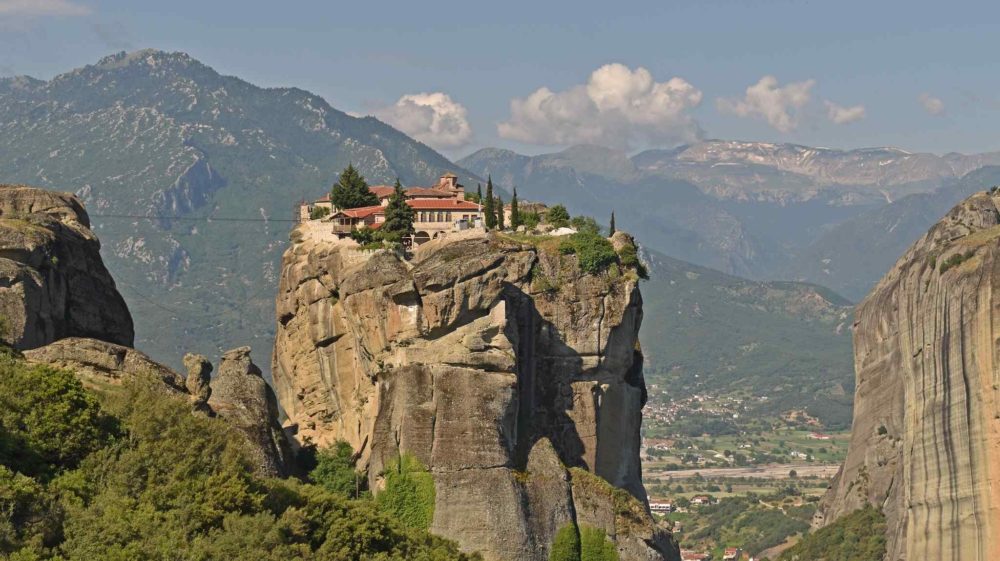 The word Meteora means “Hovering in the Air”. The area of Meteora was originally founded by the oaks who lived in the tunnels in 11th Century. But as time passed the people climbed to the peak of the rock where the Monastery is built. The Building Material was transported to the peak by ladders and baskets and hence built the first Monastery. But now there are proper roads, pathways and steps to reach the top.

El Escorial is also known as “Monasterio del Escoria”. It is located in San Lorenzo in central Spain. It is the most visited landmark in Spain. The building is a famous architectural monument and the construction of Building began in the year 1563 and was completed by 1584. The interior of the Escorial was designed by Spanish and Italian artists between 16th and 17th Century. The Monastery came under The World Heritage Sites in the year 1984.

The Monastery is located in Mount Siani 5000 feet above the sea level a valley to the North of Mount Musa in the Sinai Peninsula. It is the oldest Christian Monastery and still in use. The Monastery was founded in the year 527 by the year by the Byzantine emperor Justinian I. Recently the Monastery is named as Saint Catherine’s Monastery. The monks of the Monastery maintain a dedication to prayers and support of pilgrims and visitors, they have maintained the ancient spiritual Heritage of Siani. The Monastery is recently named as The World Heritage Sites.

The Monastery is located at an altitude of 1147 meters at the highest mountain in Bulgaria. The place is a key tourist attraction, especially through the summers. The maximum visitors to the Monastery was 90,000 in the year 2008. The Monstery was founded in the 10th Century by St. Ivan. The Monastery is one of the hideouts of the Bulgarian revolutionaries. The Monastery has 24 meters walls in the shape of an irregular pentagon. It has two iron gates covered with great architecture. The Monastery is also famous for its massive library which has about 250 manuscripts books from 11th to 19th Century and 90,000 old printed books.

The Monastery is one of the seven wonders of the world. It is situated in Kiev which is Ukraine capital and is a famous attraction for tourists. Kiev Pechersk Lavra Monastery was found in the 11th Century. The Monastery is divided into two parts one is Upper Lavra and the second is Lower Lavra. The Upper Lavra is owned by the government which contains a number of Churches and Museums and there is an entry fee for the Tourists to visit the Monastery. Lower Lavra consists of narrow passages and caves where the Monks had their Education and the entry to the Monastery is free.

The Monastery is located in Central Montenegro with its face high upto the clouds, the visibility of the Monastery depends upon the Weather conditions. It is one of the most visited Monasteries in the World. The view from the top the cliff is breathtaking. The Monastery was found in 17th Century by Vasilije the Bishop of Herzegovina, after his death in 1671 hid body was kept in Cave Church. There are two parts in the Monastery one is Upper Monastery and the other is Lower Monastery.

These are the 10 most famous Christian Monasteries in the world. Do post your comments.