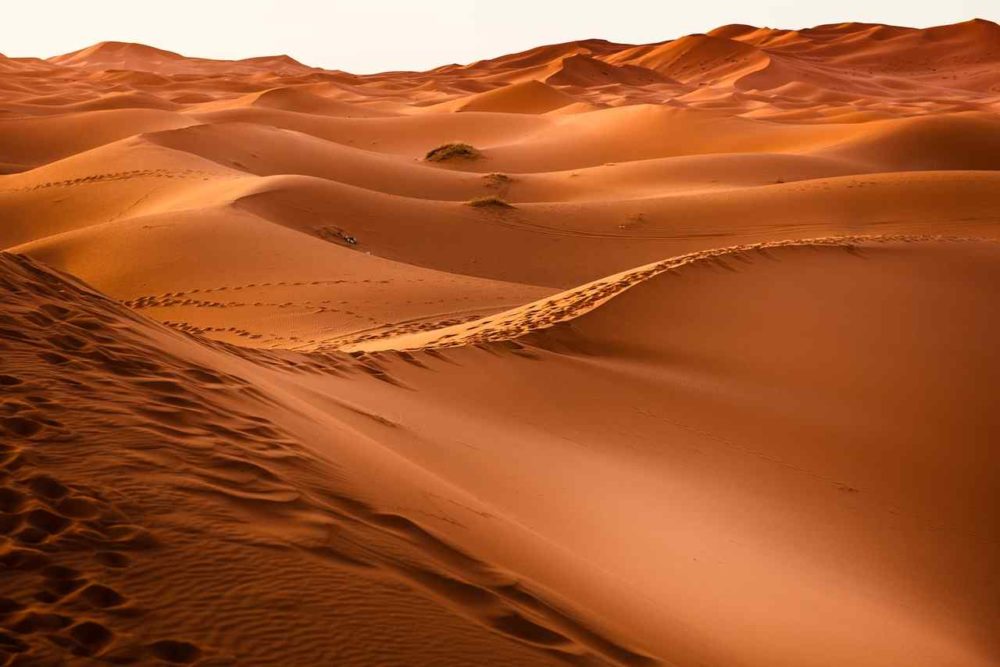 Ranging from the Mediterranean in the north, and the Red Sea in the east, the ever-expanding Sahara has dominated most of northern Africa. Sahara has always been a mystification for people because of its vast stretches of sand. Perfectly known as the largest hot desert in the world, the Sahara is often regarded as the place “full of challenges” that allures thousands of global tourists each year. Here are some of the interesting facts about the Sahara Desert,

Facts About The Sahara Desert

1. Not the Largest Desert, but the largest Hot Desert

We always believe Sahara as the world’s largest desert, but in actual it is not. The largest desert in the world is Antarctica and Sahara is the largest Hot desert in the world. But Still, the Sahara is pretty and getting bigger day by day, currently covering an area of about 9 million km2. The Sahara covers large parts of Algeria, Chad, Egypt, Libya, Mali, Mauritania, Niger, Western Sahara, Sudan and Tunisia amounting to 31% of Africa. The Sahara desert is huge enough all the United States and it means “desert” in Arabic and hence the meaning of “Sahara Desert” would be called as “‘Desert’ Desert”.

2. The climate of the Sahara, Too extreme

Sahara experiences a tropical climate with extreme weather conditions. During the day the temperature may reach 50°C, when at night it may fall to below 0°C. Also, The Sahara’s northeasterly winds often give rise to sandstorms and dust devils. Half of the Sahara receives less than 250 mm of rain per year, and the rest receives up to 1000 mm per year, making rain usually an infrequent torrential. The Sahara is the largest desert, covering 9 million km2.

3. Mountain in the Sahara Desert

4. Snowfall in the Sahara Desert

One of the most amazing facts about the Sahara is that Saharan peaks are camouflaged with snow during the winters. But, the Sahara has distinct elevations and is geographically a rocky desert. However, it contains underground rivers that come out in the form of the oasis. Also, many peaks in the Sahara are also known to be volcanic. According to Forbes, this desert snow is due to high-pressure systems in Europe. Moreover, the most popular snowcapped Atlas Mountains in Sahara is a popular trekking destination. There is an ancient lake existed beneath the Sahara that keeps itself alive with a 110′ deep root system. There have been also some pieces of evidence that mega lake existed beneath the Sahara at one point covering over 42,000 square miles.

5. Rivers in the Sahara desert

6. Plants in the Sahara desert

It is interesting to know that Sahara hosts about 1200 species of plants that mainly includes succulents, trees, shrubs, herbs, and grasses. The Saharan plants are easily adaptable to heat and drought conditions. In addition to that, many varieties can survive even in salty conditions as well. Also, the driest part of the Sahara i.e. South Libyan Desert also harbours very few species of plants. There is a plant in the Sahara desert known as Resurrection Plant that can survive over 100 years without water. The plant dries up and rolls around the desert until it will find a wet ground and buds happen to grow shortly after that. One of the most surprising factors about the Sahara Desert.

7. Animals in the Sahara desert

Sahara desert is home to some of the most fascinating animal species in the world. The animals that inhabit Sahara desert are quite unique and they can be rarely found elsewhere in the world. The Saharan most incredible animals species include Dromedary Camels, Dorcas Gazelle, Dung Beetle, the Addax Antelope, Deathstalker Scorpion, Ostrich, Monitor Lizard, Fennec Fox, horned Vipers, and many more. These endangered species of reptiles are found only and only in Sahara. But scientists have also found the evidence of the existence of river animals like crocodiles and they have also discovered the fossils of Dinosaurs, Jobaria, Afrovenator, and Ouranosaurus in the Sahara desert.

8. People in the Sahara Desert

According to estimates, the Sahara has an entire population of fewer than two million people, including those who live in permanent communities near water sources, and Nomad tribes who move from place to place with the seasons. But scientists believe that Sahara was habitable once upon a time and there used to be more population than what is in the present time. But in course of time, the climate of Sahara desert has undergone dramatic changes which led to the extinction of many flora and fauna species and people as well.

9. History of the Sahara desert

The Sahara desert was fertile and well-watered land about eight thousand years ago. It had a well-developed grassland ecosystem and was a much cooler place than it is today. Researches show that there used to be green and thriving vegetation in Sahara that supports the life of millions of living beings including flora, fauna and humans.

10. Sand dunes, as an endless giant

Sahara is an endless giant of dunes of sand. And of course, there are dunes in many places of Sahara, of which some tower to over 400 feet high. But, the sand only comprises a thin layer with gravel sub-strata. In fact, it is interesting to know that the Sahara is just 30% sand and 70% gravel. Surprizing! facts about the Sahara desert

These are the incredible facts about the Sahara desert. Do post your comments.