The Eye of Horus is one of the most recognized ancient Egyptian symbols. While many people recognize the Horus symbol, they don’t know the fascinating origin story or unique characteristics that tie into both modern medicine and art.

Take a journey into Ancient Egypt and discover the dramatic history of this ancient symbol and what it means.

In Egyptian Mythology, Horus was the God of the Sky. The son of the God Osiris and the Goddess Isis, Horus was worshipped as a protector and ruler over ancient Egypt.

In many hieroglyphic art displays, Horus was represented by a falcon or the body of a man with the head of a falcon. He was also often used to depict the Pharaoh, who represented his powers of protection and leadership.

What is the Eye of Horus?

The Eye of Horus is an artistic depiction of a left eye, which bears a resemblance to both a human eye and a falcon eye. It’s a symbol of power, protection, and alignment with the moon. It’s sometimes referred to as the Wadjet Eye and depicted with the Goddess Wadjet. It’s also called The Third Eye or Sacred Eye for its symbolism surrounding universal knowledge and a connection with an omnipotent deity.

This eye symbol is often confused with the similar Eye of Ra, which is depicted by the right eye. The Eye of Ra represents many of the same concepts as Horus’ eye, but in alignment with the sun. Many believe that a good Pharaoh required both to rule Egypt. If you want further details on the difference and similarities between the two eyes, you can get more on this site. 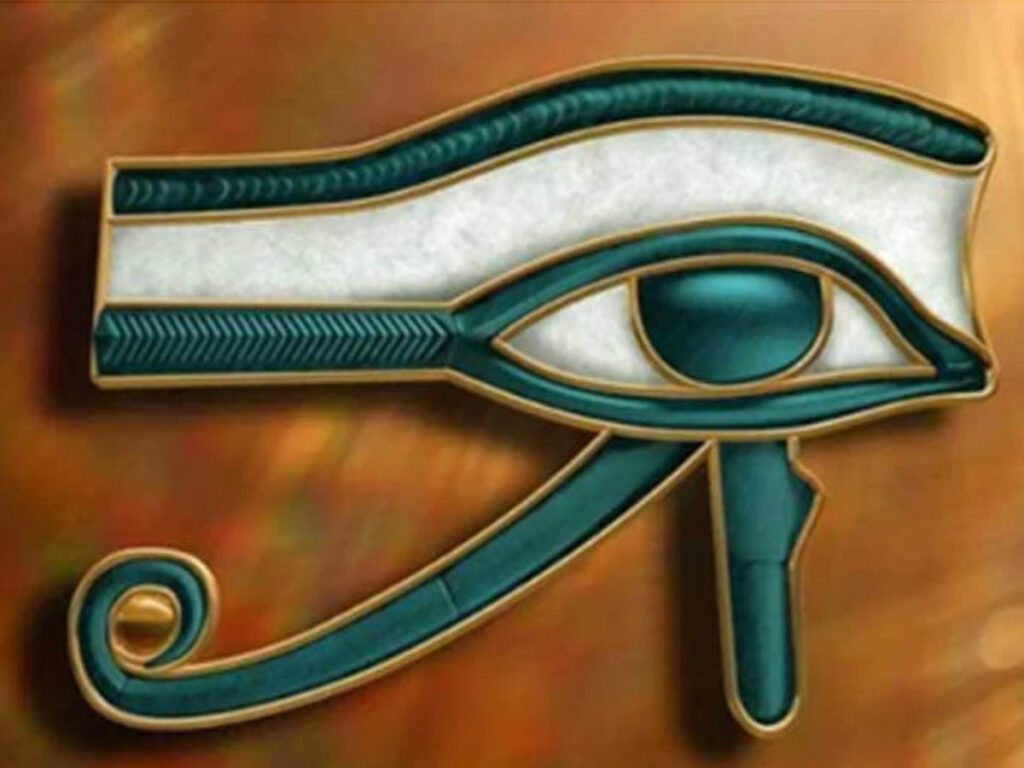 The Horus eye story is a subset of the battle between Osiris and his brother Set. According to the story, Set was envious of the royal power bestowed on the god Osiris and the Goddess Isis. He plotted to murder his brother and take over as the ruler.

However, Set went above and beyond when claiming royal power from his brother. Instead of simply murdering Osiris, he dismantled his body and cast it across the land. In the Egyptian religion, it’s believed that a body must be properly embalmed and entombed to receive judgment and enter the underworld. By casting Osiris’s body across the land, Set prevented this from happening.

Yet, Isis wasn’t a deity to take things lying down. She gathered Anubis, Horus, and the goddess Nephthys to help her locate and recover Osiris’s scattered parts. Upon doing so, she was able to resurrect Osiris so that he could enter the underworld, where he’d rule.

While Osiris’s story came to a close, the story of the God Horus doesn’t end there. Horus grew up and became powerful, eventually seeking to avenge his father by killing Set. Here, ancient Egyptian mythology is subject to a few hieroglyphic interpretations. Some stories say Set tore Horus’ eye from him and scattered it into six pieces, similarly to the way Osiris was dismantled. Other versions say Horus did it to himself as a sacrifice.

Between the building of the great pyramid and the complex medicinal practices, it’s no surprise that the ancient Egyptian people were great innovators. Ancient Egyptian artifacts have depicted details about depression, the cardiovascular system, and body preservation that still baffle scientists and archeologists today.

The Eye of Horus is one of those mysteries that still raises questions about the intersection between mythology and medicine, particularly in the field of neurology and neuroanatomy.

The drawings and depictions of the human brain from ancient Egypt are shockingly accurate, with a few key differences in the olfactory tract and the corpus callosum. Interestingly enough, if you transpose the Egyptian eye symbol over the images of the brain, it fits perfectly with the depicted neuroanatomy of ancient Egyptians.

Finally, the brow follows along the corpus callosum, where we process thoughts. This could tie into the idea of a sixth sense or symbolize wisdom.

Beyond the senses, the eye also aligns with the pineal gland— a tiny gland at the center of the brain. The function of the pineal gland isn’t fully understood, but it plays a role in sleep and hormone regulation. Modern spiritualists believe this is where the Third Eye moniker comes into play.

It’s no wonder that these discoveries have led to reputable, peer-reviewed studies about the human brain or insane conspiracies about the Egyptians and the Illuminati. Suffice to say, the impacts of the Ancient Egyptian eye are still being felt in modern medicinal practices.

The Eye of Horus in Modern Times

So beyond medical mysteries, what does this mysterious Egyptian symbol represent in modern times?

As mentioned before, the Eye of Horus and its ties to the mysterious pineal gland plays a role in modern spiritualism. The idea is that by tapping into this part of the brain and opening your third eye, you’ll be able to better connect with and understand the universe.

Many fishermen in the Mediterranean still paint the sacred eye on their boats to invoke the protection and safe passage that this ancient Egyptian symbol was once said to represent. In some parts of the world, the dead are buried with an amulet depicting the eye symbol as a protective measure in the afterlife.

Like many mysteries from that part of the world, it’s unknown if we’ll ever truly understand the symbolism behind the Eye of Horus— and it’s that mystery that makes the world such an exciting place to live.