Beautiful flowers, pleasant fragrances and lush leaves are the factors that attract humans to plants, but some of these plants can be life-threatening for people. As a protective mechanism to deter animals, plants have evolved several mechanisms to keep animals from eating the plant. Poisonous leaves, berries and roots are one such mechanism. While most plant toxins do not affect humans much, some deadly toxins can cause severe medical complications including death. Here is a list of the 10 most poisonous plants on Earth.

This deadly plant more commonly known as the deadly nightshade is a wild plant found in the Southern and Central parts of Eurasia and is very dangerous to humans. The berries of this plant look dark blue and are about the size of cherries. Ingestion of two berries is enough to kill a human adult because of the quick action of toxins present in this plant. Chemicals like atropine and scopolamine which cause muscle paralysis and death. Chemicals extracted from this plant are used as anaesthetic agents and to treat disorders like asthma, spasms and excessive sweating.

Additionally known as belladonna meaning “beautiful lady” in Italian. The name originates from the habit of old woman use eye drops made up of Atropa belladonna to dilate pupils and produce seductive gaze. Sometimes, it is also known as Devil’s Cherries, Naughty Man’s Cherries, Divale, Devil’s Herb and Dwayberry. During ancient times, it was used to prepare poison arrows by the humans, especially during ancient Romans era. Deadly nightshade is a perennial plant that has a lifespan more than 2 years in the wild. 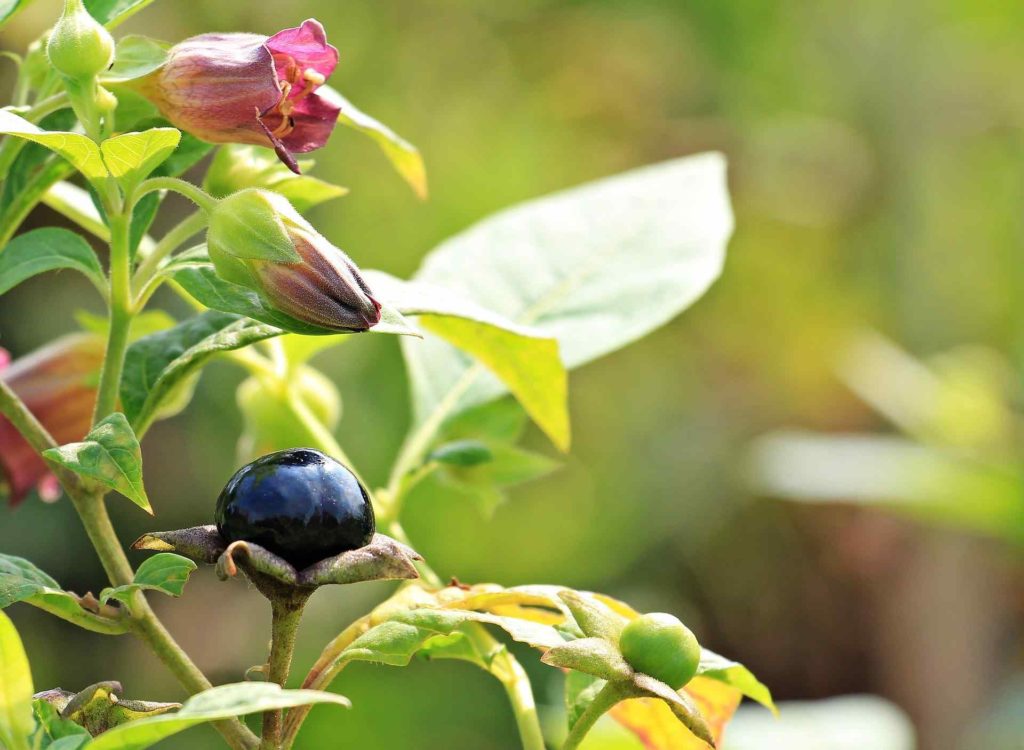 It is one of the poisonous plants which is native to Africa and is today widely cultivated across the world for extracting castor oil as well for ornamental uses. The beans of this plant contain a poison called ricin which can be deadly even in small amounts. It acts by inhibiting the synthesis of particular proteins and the symptoms manifest in the form of severe vomiting, diarrhoea, seizures and death. This toxin is 6000 times more potent than cyanide and only 8 small beans are enough to cause the death of a human being. It has been used by terrorists to assassinate people in the past. You will also like reading about most effective Medicinal Plants.

Castor oil was used for the wick lamps in the past and it is widely used in the industry of varnishes and paints, nylon and many synthetic fibres. The lifespan of the plant is one year and hence it is known as an annual plant. Scientifically known as “Ricinus communis” because of the tick-shaped seed (scientific name of tick) and also the ability of the plant to grow in multiple areas. The plant can reach upto 6 to 15 feet in height. 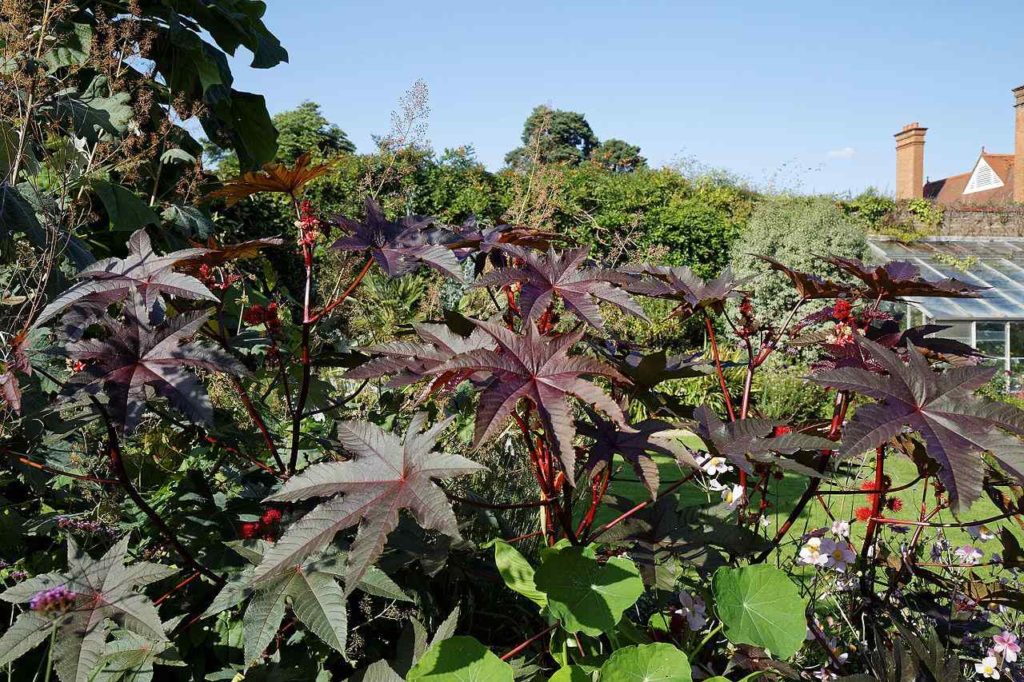 This popular garden plant is in fact very poisonous and can cause severe diarrhoea, vomiting and irregular heart rate as it affects the nervous system. Unlike other plants where the poison is concentrated in beans, all parts of this poisonous plant contain the toxin. It has very beautiful and sweet-smelling flowers that bloom in clusters and have a pink or white colour but the flower itself and the nectar are also poisonous. Ingesting small quantities by chewing the stem or drinking the nectar may cause death. Interestingly, the poison does not affect birds. Also, please read about strange desert plants.

One of the deadly poisonous plants can reach upto 3 to 20 feet in height, however, some of the species can grow upto 8 to 12 feet tall. Talking about the appearance, leaves are thick and leathery and can be 4 to 6 inches long. The plant develops yellow, white, pink, light orange and red flowers mostly gathered in clusters and located at the end of the branches. The fruit of the plant is known as a capsule and each one of the capsules contains fluffy seeds and each part of the plant contains toxins. 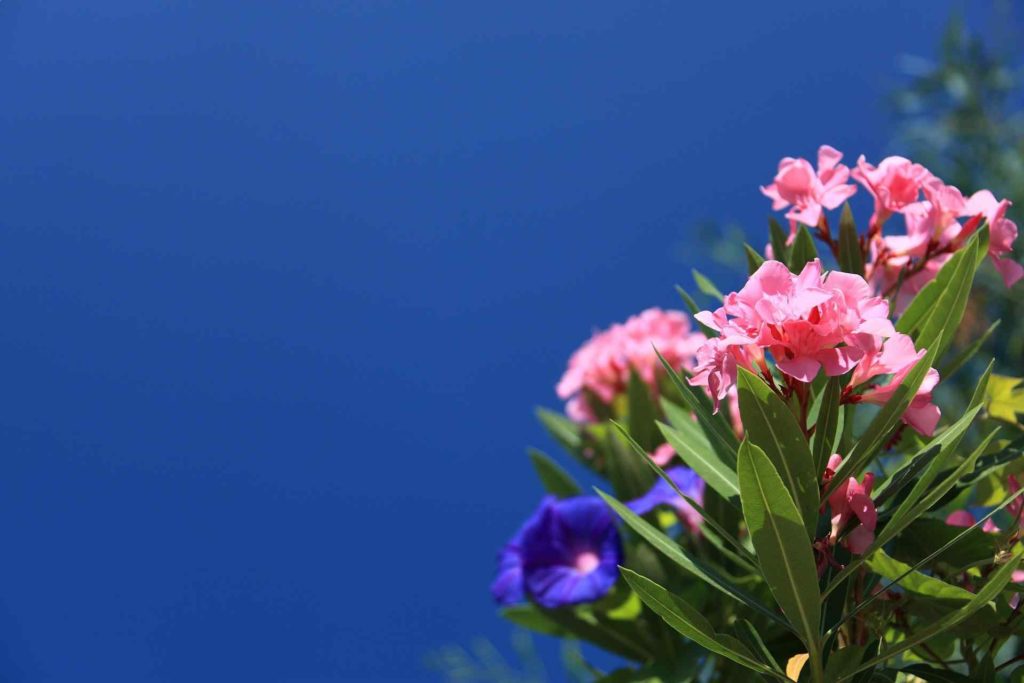 The plant of the rosary pea is not very distinctive but the seeds are bright red and black which make it stand out. In fact, it is the seeds that are the poisonous part of this plant and ingesting these seeds can cause the death of an adult human being. In some parts of the world where it plants is native, like India and Indonesia, these pretty seeds are used as beads in various ornaments. The plants are also popular garden plants in tropical regions. The seeds contain an albumin-based toxin called Abrin which is released when the shell breaks and inhibits protein synthesis and causes irregular breathing, vomiting, diarrhoea, and dehydration. Also,  read about beautiful carnivorous plants.

The plant mostly grows on shrubs and small trees and negatively affect the growth of the primary plant. The poisonous plant species have purple or white flowers arranged in large clusters that mostly grow from the axils of leaves. It attracts bees and ants and hence they are responsible for the pollination of the plant. Abrin from rosary pea is often used in medical studies due to potential to kill cancer cells. It has a lifespan of more than 2 years and known as a perennial plant. 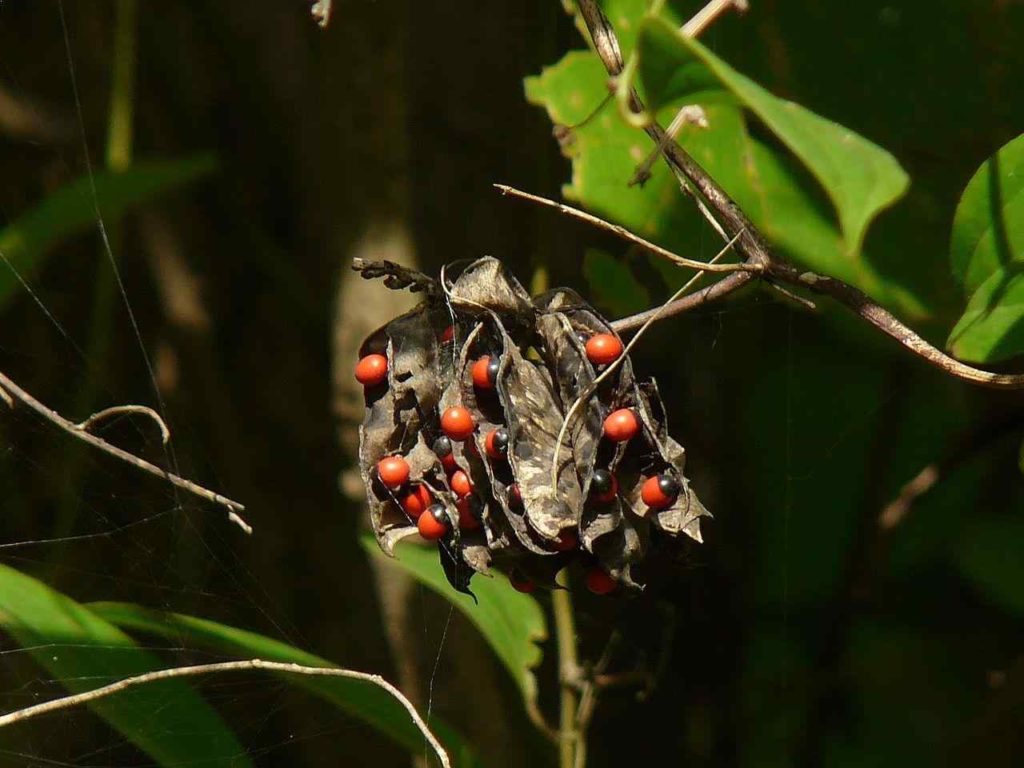 This poisonous plant is commonly found in North America and is three feet tall with white flowers. All parts of this plant are mildly poisonous though death in humans due to direct consumption is rare. It was however very common for cattle to ingest this plant and the toxin, called tremetone, to get transfers to the milk. This milk when consumed by humans causes a disease known as Milk Sickness. This was very common before the 19th century and caused vomiting, weakness, pain, coma and in rare cases death.

Because of the standardised diet was given to cattle and the testing of milk before it is distributed, milk sickness is rare in current times. One of the deadly poisonous plants can also be used in folk medicine in the treatment of fever, diarrhoea and kidney stones. It is a perennial plant with a lifespan of more than 2 years. The plant usually grows from seed and cuttings, however, the plant is deadly both in the form of fresh and dry form. 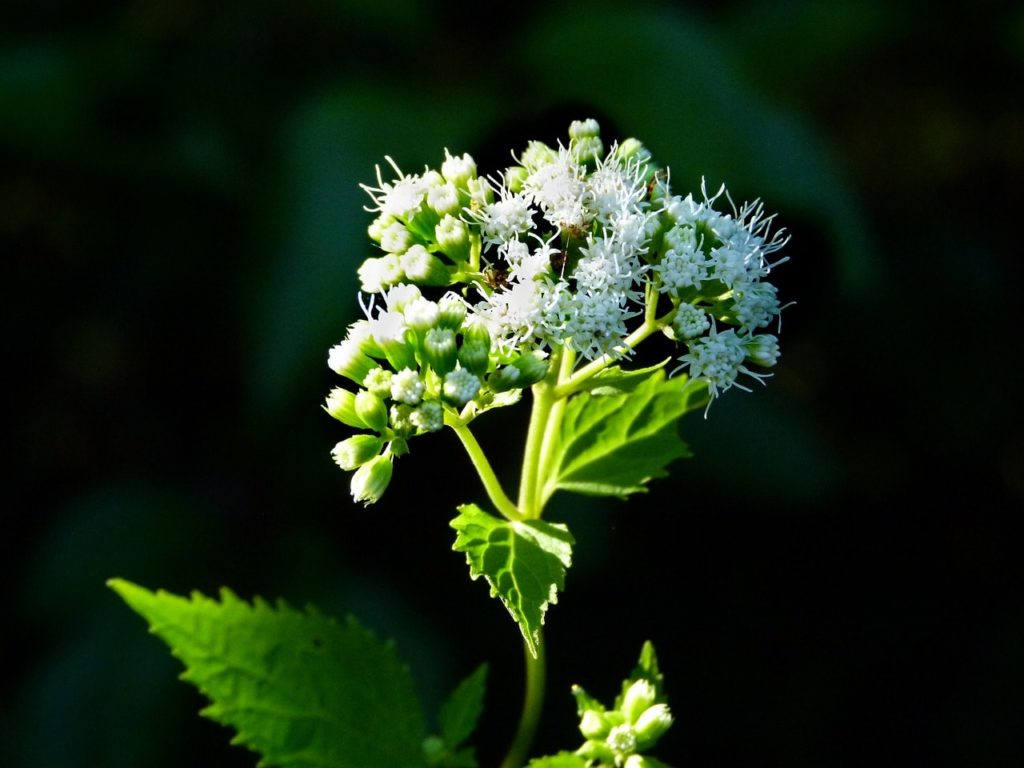 The cicuta plant is commonly known as water hemlock and is one of the most potent and poisonous plants that is found in North America. It grows up to a height to 2.5 metres and has tiny white umbrella-shaped flowers. All parts of this plant are poisonous though incidents of death of cattle and pets are more common than human deaths. However, if ingested, the poison present in this plant affects the central nervous system and may cause death. The flowers of the plant are small and white that mostly grow in umbrella-like clusters. 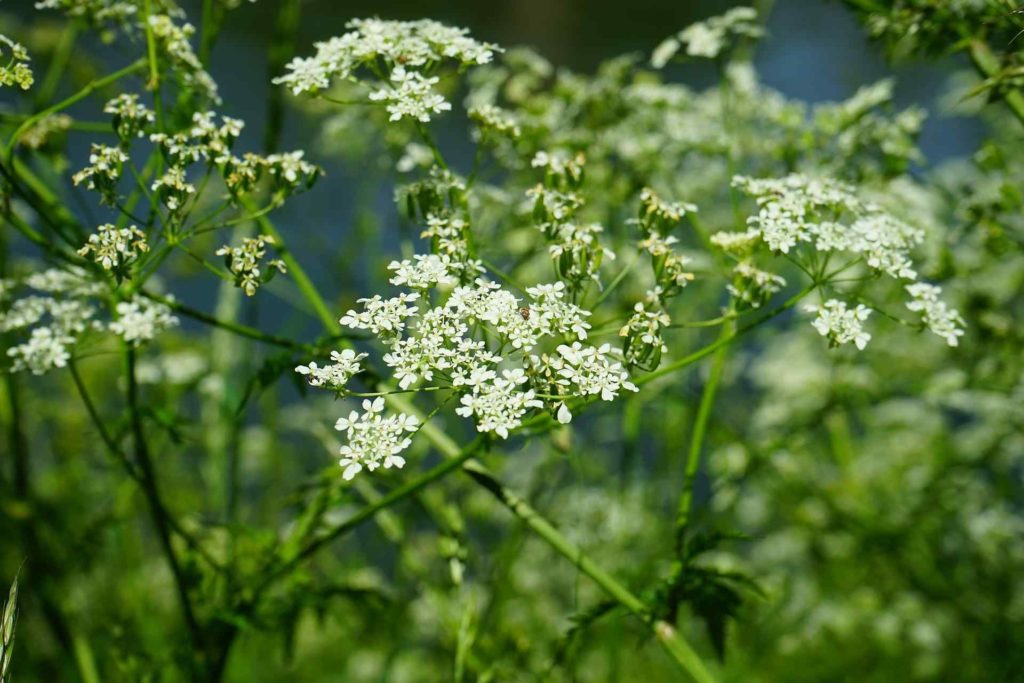 The aconite plant is commonly found in the Northern Hemisphere and has many documented uses especially in Europe. It has very beautiful flowers that are shaped like the head of a monk; hence it is also called monkshood. Most parts of this plant are poisonous but the roots are tubers are the most deadly. For a long time, it was used by the Greeks to kill leopards and wolves earning it the name of wolf’s bane and leopard’s bane. If consumed by humans, the poison in this plant causes vomiting, diarrhoea, irregular heartbeat and in extreme cases coma and death. One of the deadly poisonous plants has multiple benefits since it acts as a pain reliever and has anti-inflammatory effects. Also, it is very useful in labour pains and anxiety and tension reliever. 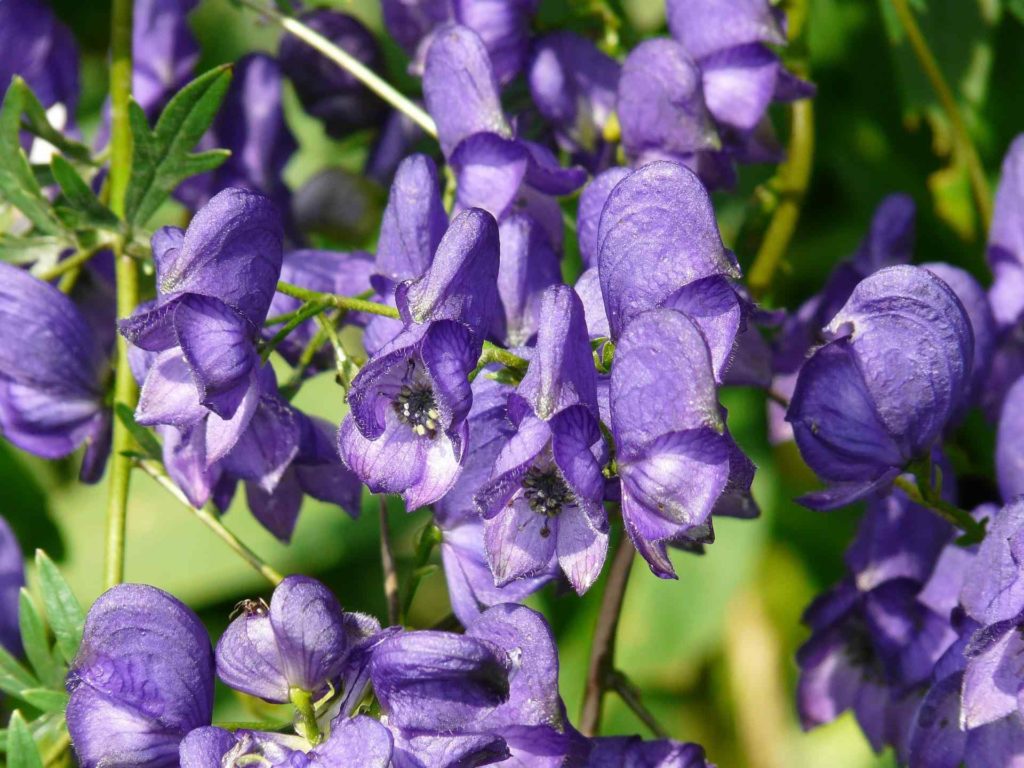 The beautiful flowers and sweet fragrance of these flowers are very distinctive and have earned them their name. It is one of the poisonous plants which is native to the northern tropical areas of South America and has a toxin called tropane. Though all parts of the plant contain some amount of this toxin, it is highly concentrated in the seeds and leaves. Consumption of small amounts does not cause death but other symptoms like vomiting, diarrhoea, paralysis and hallucinations may appear. Only in large amounts, this toxin causes death.

The flower of the plant can grow upside down and colour can be pink, yellow, orange, red, green or white. The flower of the plant has a pleasant smell, however, it is most active during the night and attracts moths that are responsible for the pollination. The plant species loves to thrive in spring, summer and autumn with moderate temperature, however, produces flower during all seasons.

Also known as the devil’s weed and hell’s bell, this poisonous plant has powerful hallucinogenic properties and can cause death if consumed in large amounts. This plant is common across North and Central America and has very long roots along with violet or cream coloured flowers. The toxin found in the plant is concentrated in the leaves and seeds though other parts are also somewhat toxic.

One of the deadly poisonous plants grows in the form of a bush and can reach upto 2 to 5 feet in height. Talking about the appearance, it produces large and irregularly lobed leaves with serrated edges. It loves to thrive in spring and flowers mostly open during the night and attract moths that are the main pollinators of this plant. It is the most widely grown commercial non-food plant in the world and all parts of the plant especially it leaves contains toxic alkaloids known as nicotine and anabasine. It is designated as cardiac poison, however, it is being widely consumed around the world and is both psychoactive and addictive. The use of tobacco causes 5 million deaths per year and hence it is termed as one of the deadly poisonous plants in the plant. During 1828, two chemistry students were able to extract the main active substance in tobacco and called it nicotine. Historically, the plant has some religious significance but now it poses a great threat to our health, however, it is also very beneficial in the medicinal world. 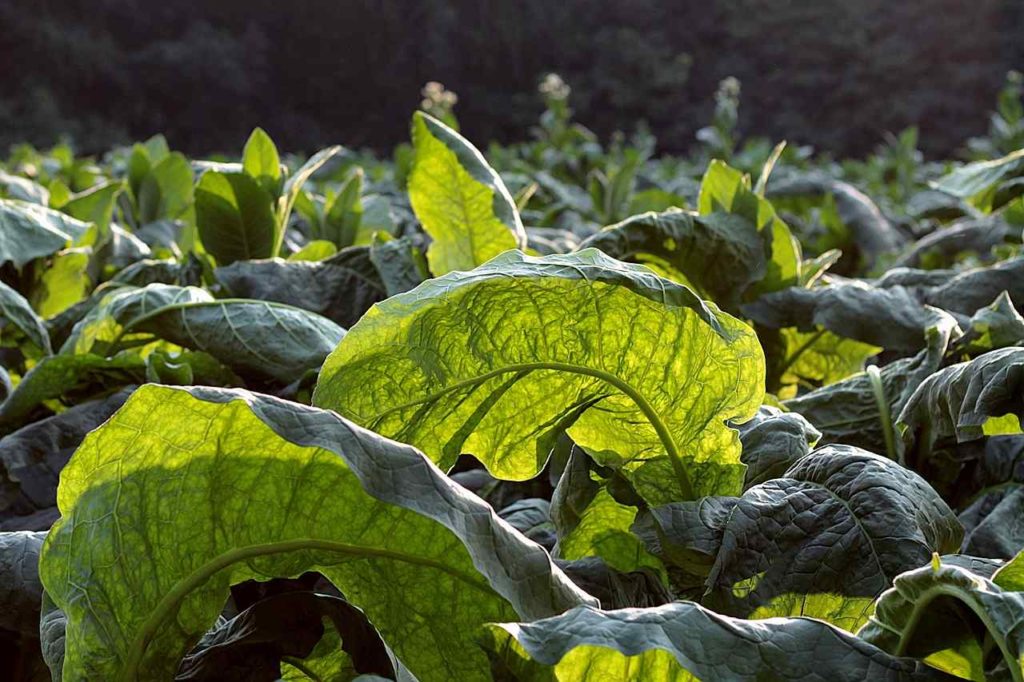 The next time a plant looks beautiful and inviting, be sure to check if it is one of these poisonous plants because accidentally ingesting such plants can cause severe symptoms leading to death. In the wild, it is difficult to distinguish poisonous plants from others so it is always a good idea to stay away from unknown plants.