A new report – “The Energy Bomb: How Proof-of-Work Cryptocurrency Mining Worsens the Climate Crisis and Harms Communities Now” – was produced by Earthjustice and the Sierra Club, and is the first to fully document the exponential growth of cryptocurrency mining in the U.S. and examine the industry’s impact on utilities, energy systems, emissions, local communities, taxpayers, and check the alternative mining at https://betfury.io/about-bfg.

Cryptocurrency mining is an extremely energy-intensive process that threatens governments around the world in their efforts to reduce our dependence on climate-damaging fossil fuels.

If we don’t act now to curb this growing business, we will fail to meet the Paris Agreement and the Intergovernmental Panel on Climate Change’s goal of limiting warming to 2°C.

Cryptocurrency mining explodes in the U.S.

After China banned cryptocurrency mining in 2020, mining activity in the United States exploded. In the year ending July 2022, bitcoin consumed about 36 billion kilowatt hours (kWh) of electricity, equivalent to the entire electricity consumption of Maine, New Hampshire, Vermont, and Rhode Island over the same period.

The past two years have demonstrated the industry’s preference for readily available energy and minimal regulation, restarting idled coal and gas-fired power plants, flooding the revamped Texas electricity market, and relying on power grids that are barely monitored by regulators.

The proof-of-work structure of cryptocurrency mining encourages miners to speed up operations as quickly as possible, often regardless of the energy source.

In fact, large miners are willing to invest in uneconomic energy sources, such as decommissioned coal or gas plants, as long as electricity can be made available quickly. Unlike other large consumers of electricity, cryptocurrency mining operations operate on a short-term basis and most have shown little interest in investing in new, clean energy. 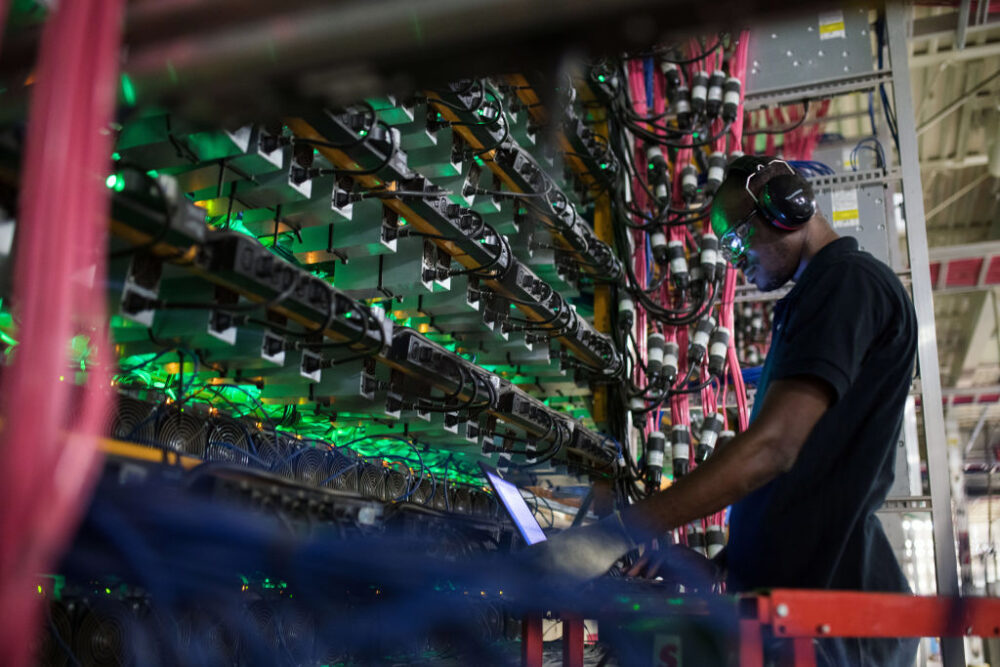 What is cryptocurrency mining and how does it work?

Proof-of-work cryptocurrency mining is designed to consume huge amounts of energy. In this process, millions of computing machines compete to solve a complex but trivial problem.

As long as the reward is high enough (i.e., the price of bitcoin is high enough), miners will try to use more – and faster – mining machines to increase their chances of earning that reward.

The more machines there are in the race, the harder the computation problem becomes and the more electricity it takes to win.

Over time, the electricity consumed by miners grows exponentially

Top-down estimates of electricity consumption by cryptocurrency mining in the U.S. indicate that the sector will be responsible for more than 27.4 million metric tons of carbon dioxide (CO2) emissions between 2021 and 2022, or three times the emissions of the largest coal-fired power plant in the U.S. in 2021.

However, these estimates are only based on the likely energy consumption to solve cryptocurrency puzzles.

Direct purchases from power plants, which provide electricity to miners “behind the meter.” Power purchase agreements with power producers or energy companies; Purchases of electricity from local power plants; and Burning gas from oil and gas wells. All forms of extraction result in excessive emissions and affect electricity and energy consumers. The industry continues its bad practices

The cryptocurrency mining community is aware that its extraordinary energy consumption – and habitual use of fossil fuels – is unattractive at a time when much of the rest of the economy is trying to rapidly reduce carbon emissions.

Over the past year, the industry and its organizations have made a variety of claims about sustainability, ranging from pure fiction to money laundering to promising theories that have been disproved by practice.

Adding significant new loads to the grid, such as cryptocurrency mining, typically requires an increase in power generation from existing fossil fuel generators.

Mining near wind and solar power plants does not require the electricity they produce but does increase emissions from gas and coal-fired power plants. Few mining companies are building new renewable energy sources for their operations.

In the U.S., the industry has shown few signs of slowing down when prices are high

From the original initiative in China, where coal is the predominant source of electricity, to AboutBit’s recent arrangement with a coal-fired power plant in Indiana, miners have proven time and again that the short-term need for large amounts of electricity trumps long-term investments in renewable energy when mining cryptocurrencies.

Unlike other sectors where self-imposed or regulated community standards can drive more sustainable practices, cryptocurrency mining is inherently a race to ramp up energy consumption until prices can no longer support growth. State, local, and federal regulators can help ensure that cryptocurrency mining does not jeopardize climate or health goals and negatively impact taxpayers.

The tremendous energy consumption combined with cryptocurrency mining could jeopardize decades of progress toward climate goals and put grids on.

In addition to a complete moratorium, state, local, and federal governments can take steps to protect utilities, communities, and taxpayers.

States and local governments can enforce pollution and noise standards, ensure that they do not pay for economic development based on false promises of long-term jobs or revenue, develop reasonable land use plans, and, where communities manage utilities, develop rates that protect existing ratepayers.

Utilities can develop electricity rates that protect against stranded assets, ensure that they do not have to increase their power generation capacity to meet the load of cryptocurrency mining, and charge rates sufficient to fully protect existing ratepayers from rising marginal costs.