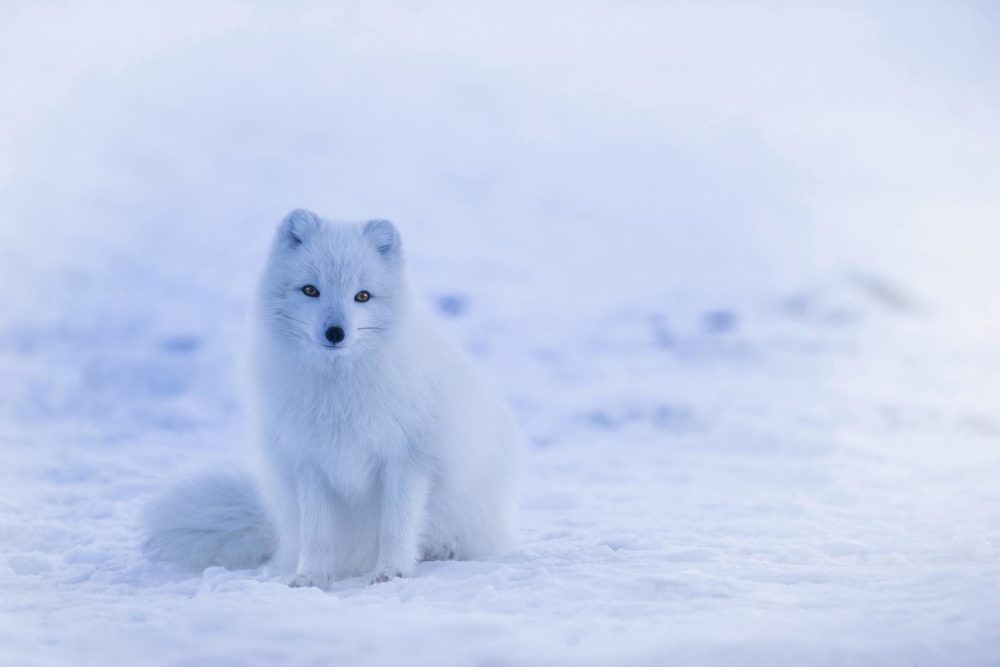 Humans winters are all about getting warm inside the home and there are many winters activities that humans can enjoy, However, for the other species out in the wild, it’s a struggle for survival. Many animals adapt to the cold weather having developed multiple defenses against the biting cold and harshest winters. The animals that live where winters grow harsh and the terrains are rugged have to depend on other defenses. Here are 10 animals that thrive in extremely cold temperatures, prevailing over their natural habitats to live in such frosty conditions. Here is a list of top 10 cold-weather animals.

Also known as a polar fox, the arctic fox is found throughout the Arctic regions in the Northern Hemisphere. It can survive at temperatures as low as -58F by burrowing into the ground or snow. Their round body, short muzzle, and small ears reduce body surface area and consequently exposure to extreme cold.

It has an insulating layer of thick fur coat that traps a layer of air and preserves body heat. Furry paws and a keen sense of hearing help them to walk easily on the snow and hunt for prey. Arctic foxes have white fur that helps them camouflage in the ice and snow. Their fur changes colour to brown or grey in summer to help them blend in with their surroundings.

Polar bears are fully equipped to survive in cold weather conditions and have multiple surviving techniques. A thick coat of long, heavy, white fur helps them to blend into their surroundings besides keeping them warm by trapping a layer of insulating air. Their oily fur keeps moisture at bay and protects it from frigid waters. A layer of blubber directly below the skin provides insulation from the biting cold. Polar bears have large paws with furry soles to help them walk easily on snow and ice. It has been classified as a vulnerable species due to global warming.

Beluga whales are native to Arctic and Subarctic seas. Also known as white whales due to their all-white color which helps them to blend in their icy habitats. The species is similar to narwhals where the dorsal fin is absent on their bodies and hence reducing the body weight which will help in reducing body surface area and thus preserving body heat. Beluga whales have a substantial amount of blubber which helps them to survive in the freezing waters. The Beluga whales have an echolocation organ, known as melon, at the front of their heads which help them find blowholes under sheet ice while hunting and swimming under extensive ice sheets. They survive on a diet of fish, crustaceans, and invertebrates.

Caribou is a Rudolph that can be easily recognized by the red-nosed and looks adorable. The animal species is native to the Arctic, subarctic, and mountainous regions of North America, Europe, and Siberia. The large antlers species has large & hollowed hooves grip to the ground that can help them to travel and survive on ice and even dig through the snow. Talking about the appearance, they have a furry coat and undercoat is thick with long and hollow hairs.

Also Read: 12 Most Amazing Horns In The Animal Kingdom

The medium-sized whale species is native to the Arctic region. The species can be easily recognized by the forehead melon and short snouts. They don’t have a dorsal fin that helps them to preserve body heat and also help them in swimming with ease under ice sheets of the region while hunting for flatfish. Also, the blubber layer on their bodies helps them to keep warm in the frigid Arctic waters. The species is also gifted with a flexible rib cage that can withstand the extreme pressure of the deep sea waters. Narwhals can also minimize oxygen consumption and store oxygen for long periods.

Walrus is native to the North Pole in the arctic seas. These are usually seen in the shallow waters above continental shelves and loves to eat shrimps, crabs, mollusks and soft corals. Talking about the appearance, they have a massive blubbery body that keeps it warm and cozy in the frigid Arctic waters where temperatures go down below zero degrees. The long tusks help them to form holes in the ice and climb out of the water on to the ice. Walruses also use their tusks to form breathing holes from underwater into the ice. Their distinctive whiskers are highly sensitive organs attached to muscles and consisting of blood and nerves. Walruses can conserve oxygen while diving by slowing down their heart rate.

Also Read: 15 Best and Largest Aquariums in the World 2018

Musk OX is one of the animal species that can survive in cold weather conditions. Talking about the appearance, the outer layer covers up a second and has an insulating coat that helps them to survive in these cold conditions. The animal species is mostly seen in Arctic Canada and Greenland and loves to eat roots and mosses of the tundra. Their hooves are sharp for digging through snow and ice for food. They use their long, curved horns as a defense against predators. They group together, huddling close to stay warm and protect the herd from predators.

Also known as the sea leopards native to the Antarctic. One of the toughest hunters is equipped with powerful jaws with a muscular body. Talking about the appearance, they have a fur pattern on their bodies that goes dark at the top and lighter on the underbellies. This fur acts as a camouflage in the water that can help them to hunt fish, penguins, squid and smaller seals with ease. Also, a thick layer of blubber provides them with insulation and protection from the extreme cold.

One of the cold-weather animals, Arctic hare’s is equipped with shorter ears that help them to save body heat in the cold weather conditions. They also have a thick fur coat to help keep it warm. Since the animal species don’t hibernate, it used to dig burrows to stay warm. Also, they survive in these conditions by digging plants and twigs out of the snow to eat. Their fur changes color according to the seasons. They’re white in the winter which helps camouflage them from their natural predators. Like musk oxen, they huddle together in groups for protection and warmth.

One of the toughest animals in the world, Snow leopard is native to Central Asia is a large cat species with a vault forehead. Talking about the appearance, the species has a thick coat which is yellow in color that helps them to stay warm in the biting cold of alpine and semi-alpine regions of Central Asia. A long and flexible tail helps them maintain their balance on rocky terrain. Their thick tails, containing a large amount of fat, are covered with lush fur and act as cozy blankets that protect their faces during sleep. They have small, rounded ears and stocky bodies covered with thick fur, all of which minimize heat loss. Snow leopards are an endangered species due to hunting, poaching and the continued destruction of threatened mountain ecosystems.