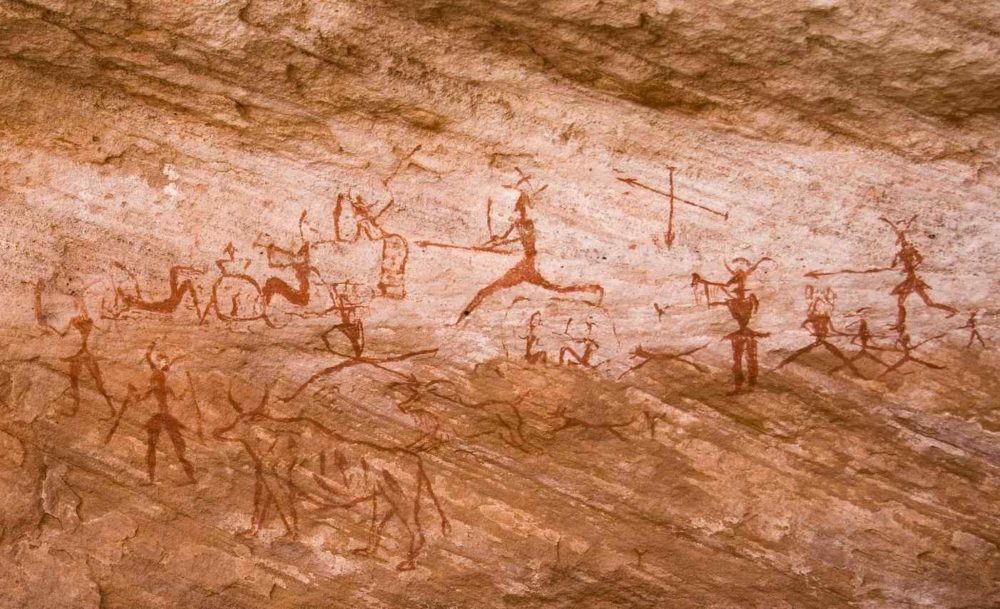 Prehistoric human beings lived in almost all continents of the world and they have left their mark on the world in the form of cave paintings and rock paintings. These paintings are very basic and most depict scenes from everyday life like community gatherings, hunting parties, and family life. Most cave paintings also have a drawing of animals commonly found in those areas or of domesticated animals. By analyzing these paintings, researchers can find a treasure of information about the way of life in prehistoric times. Here is a list of the 10 most mesmerizing prehistoric cave paintings in the word.

This was the oldest cave opened for tourists in Bulgaria on 2nd July 1961. It is believed that the cave was created by earthquakes and rivers a long time ago. The cave was known to humans from millions of years and now it is used for tourism and for producing Natural Sparkling Wines. In the past, it was also used to store for cheese, a refuge for partisans and various other purposes. Most of the figures in the cave are those of humans performing various activities like dancing and hunting while there are also a large number of paintings of animals. 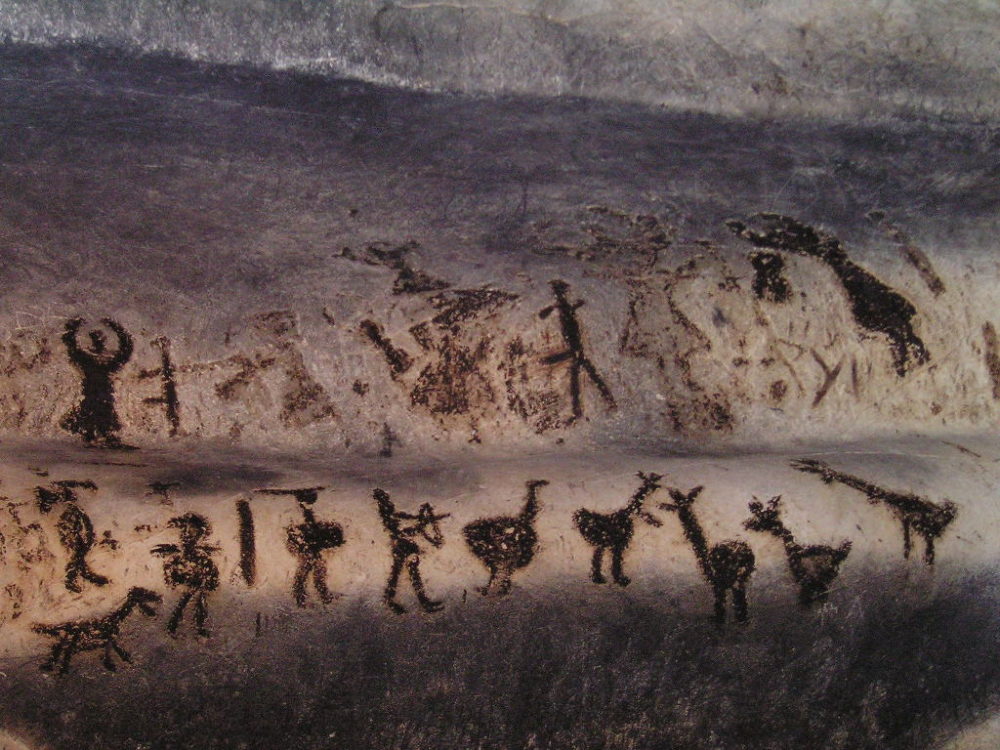 This cave, in the Patagonia region of Argentina, has some of the unique prehistoric cave paintings and the cave’s name literally translates to ‘The Cave of Hands’ since the images inside the cave are those of human hands. On entering the cave, one can see a large number of stencils of human hands spray painted on the stone walls. Most of the outlines are those of left hands suggesting that the painters held the spraying hose in their right hands. This cave is one of the foremost attractions in the Patagonia region. Also, please read about the most famous works of art.

The paintings of Cueva de las Manos has been executed between 13,000 and 9,500 years ago. Because of stencilled outlines of human hands in the cave, it is also named as Cave of the Hands. The paintings also depict paintings of animals like guanacos that are still seen in the region and at various hunting scenes. It is believed that the people who are responsible for the paintings are the ancestors of the historic hunter-gatherer communities of Patagonia found by European settlers in the 19th century. 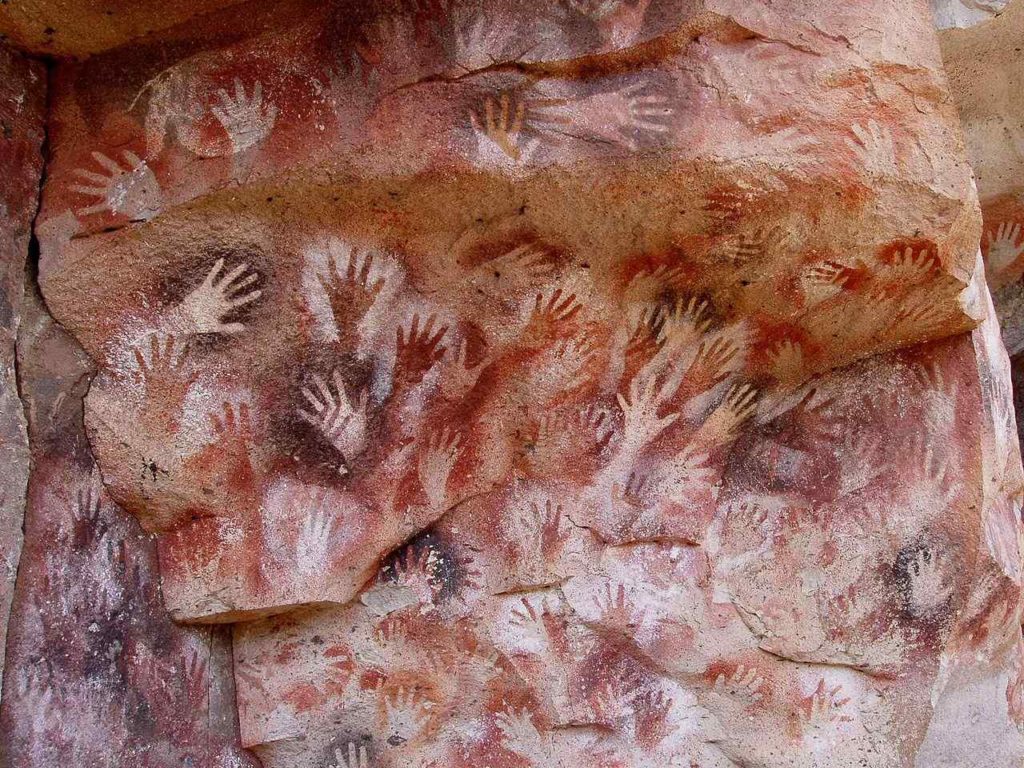 This cave has one of the few samples of prehistoric cave paintings found in India and is also one of the oldest in the world. The Bhimbetka cave is located in Central India and has paintings depicting the lives of the cave-dwelling people as well as the animals they encountered in their daily life. There are paintings of tigers, lions, bulls, and crocodiles along with many others. Red and white are the most commonly used colours in these 12,000-year-old paintings but green and yellow are also occasionally seen. You will also love reading about the most famous paintings in the world.

The cave is located in the Raisen District of Madhya Pradesh and lies in the Vindhyan Mountains on the southern edge of the central Indian plateau. The cave was discovered by Dr V. S. Wakankar in the year 1958. The name has been derived from ‘Bhim Baitka’ and it is named after one of the five Pandavas of Mahabharata. It simply means “sitting place of Bhima”. The paintings depict the lifestyle and everyday activities of our ancestors. Some of the common colours used in the paintings are natural red and white pigments, however, green and yellow paintings are also seen. Serra de Capivara is a national park in Brazil and contains several caves with prehistoric paintings, some of which are estimated to be about 25,000 years old. These paintings most commonly depict scenes of group rituals and hunting and also of animals the people saw around them. The date of these paintings is, however, disputed since scientists are unable to agree on how long ago human settlements were present in Brazil. One of the beautiful prehistoric cave paintings located in the secluded valleys of northeast Brazil is one of the most significant arts of rock art. It is being that the art dated back in the 25,000 years ago and some of the rocks even as far as 36,000 years ago. 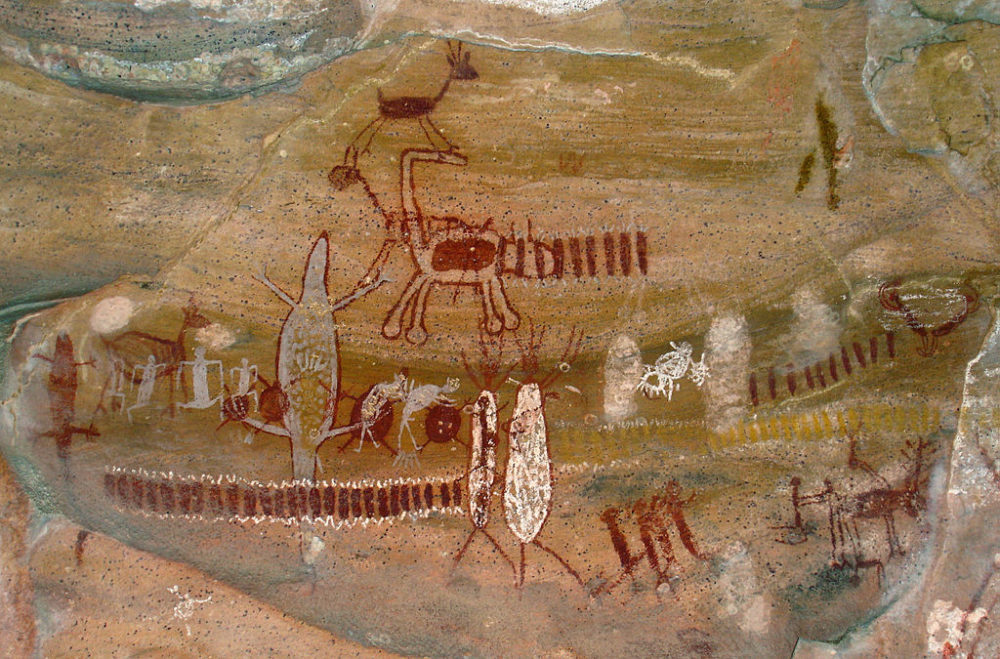 Since human life is believed to have originated in Africa, it is no surprise that there are multiple prehistoric cave paintings on this continent. The Laas Geel cave is one such site which is located in Somalia and is an example of some of the earliest cave paintings in the region. The paintings depict scenes of rituals with cows in ceremonial robes, humans performing different activities, domesticated dogs, and giraffes. However, due to the long drawn conflict in Somalia, this cave is not a very popular tourist and nor is its existence well known to people outside the academia.

Laas Geel means ‘source of water for camels’, and the site is placed on a granite outcrop that rises from a plateau at an altitude of 950 meters above sea level in the north-western part of the Horn of Africa on the road that links Hargeisa and Berbera. The name suggests the availability of water near the surface of the wadis and the panels are placed at different levels and distributed through the eastern flank of the outcrop. 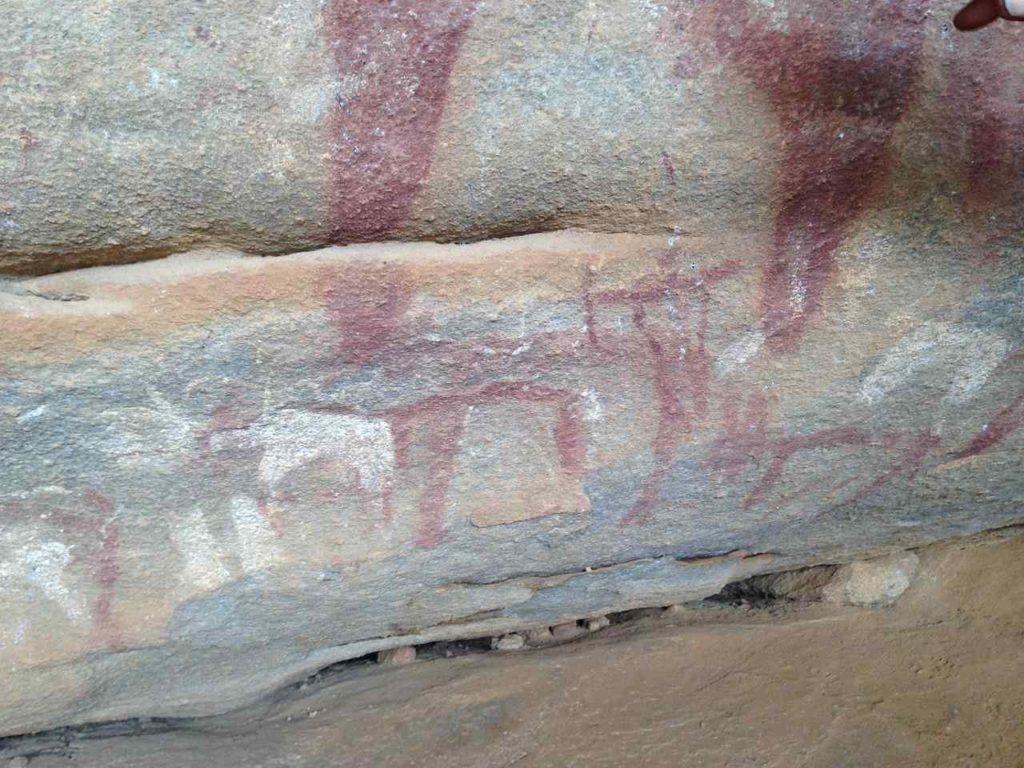 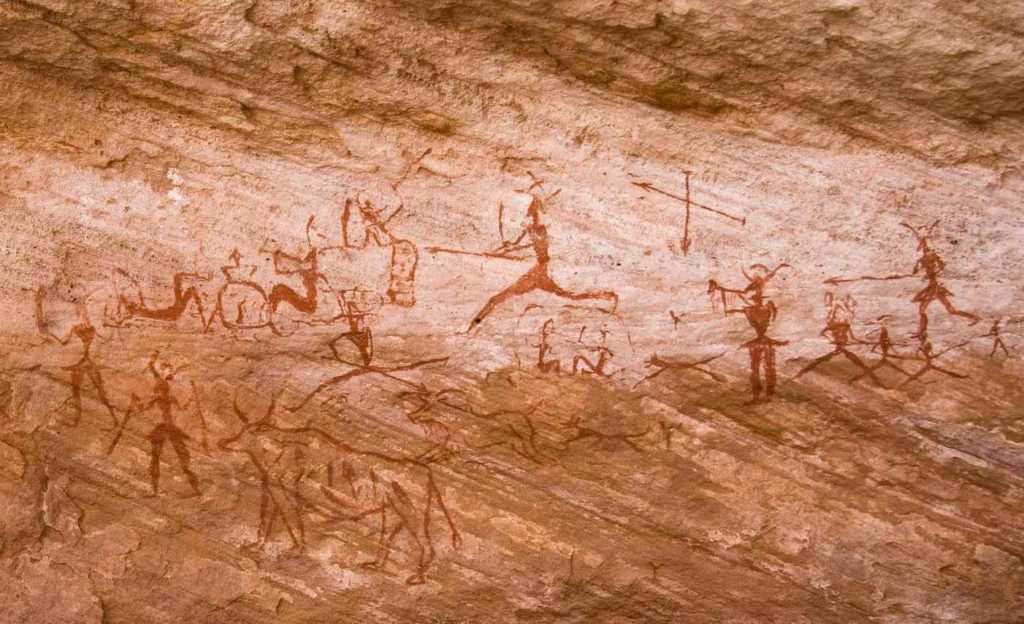 This cave in the South of France has the oldest prehistoric cave paintings known to us and dates back to 32,000 years. However, the discovery of this cave is very recent since it was only in 1994 that Jean-Marie Chauvet, after whom the cave is named, discovered it. Since then it has acquired great prominence in historical research and has also been declared a UNESCO World Heritage Site in 2014. It is fast developing into a tourist destination in the South of France. 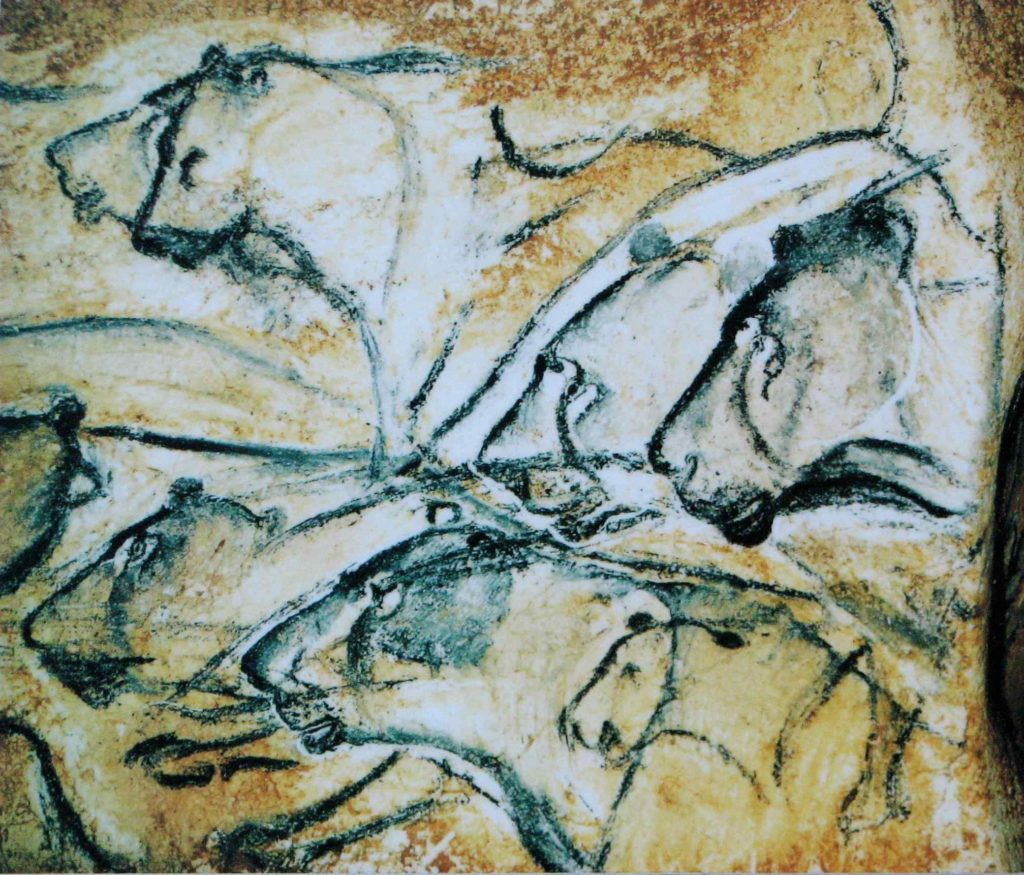 These rock paintings were made by the aboriginal people of Australia and are estimated to date back more than 20,000 years. There are many cave paintings preserved as part of the Kakadu National Park and there are over 5,000 different sites in this park where paintings have been discovered over time. Some of these paintings depict scenes of human activity while others show drawings of skeletons of animals. This gives an idea of the depth of understanding the aboriginals had about their surroundings. 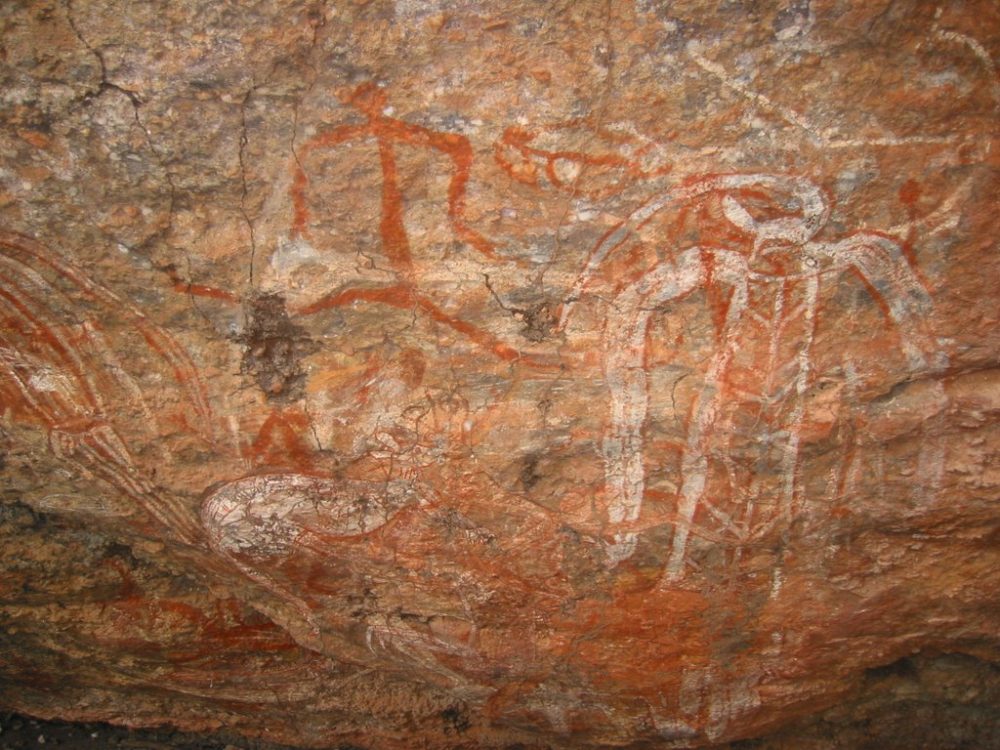 The Altamira Cave in Spain is the first sample of prehistoric cave paintings to be discovered in the world and opened up a whole new area of study. When the paintings were first discovered in the 19th century, they were very well preserved and this made people sceptical about the actual date of these paintings. However, later studies showed that these paintings did indeed belong to the prehistoric era. Some of the things painted are shapes of animals, scenes of hunting and community gatherings. 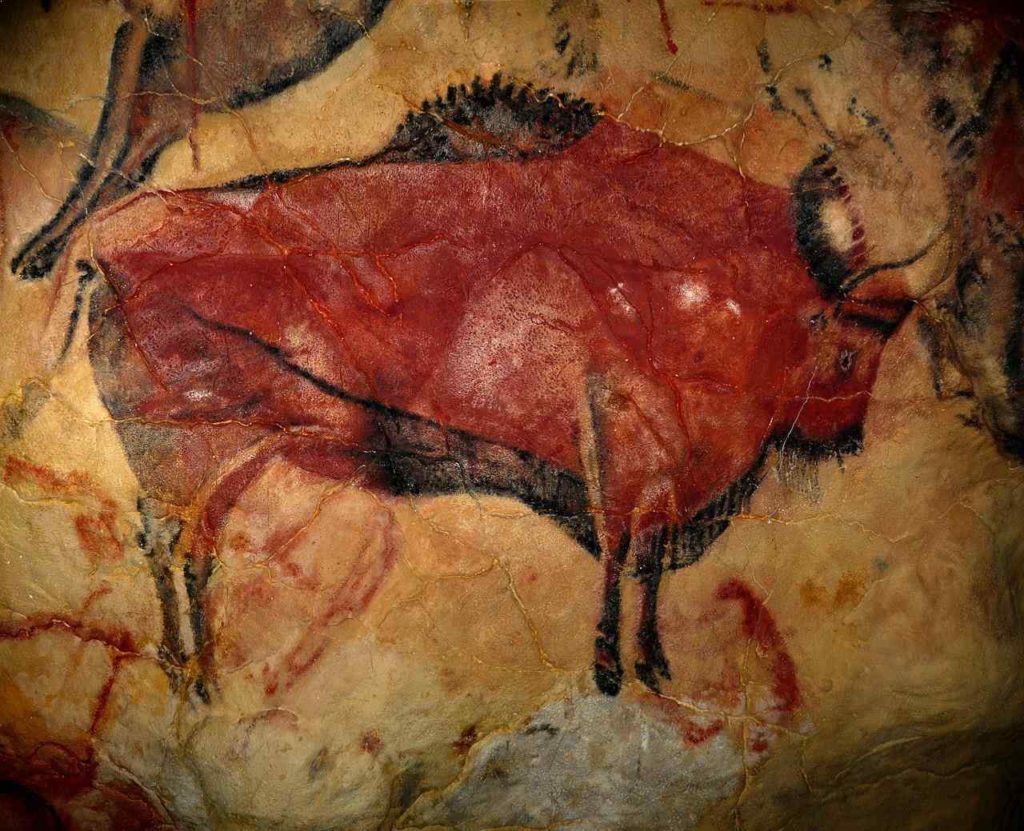 Another cave in Southern France that has prehistoric cave paintings, this one is known for the beauty of the paintings and contains some of the most famous paintings in the world. This cave is known as the “Prehistoric Sistine Chapel” since it has many iconic cave paintings that date back 17,000 years. The most famous among them isThe Great Hall of the Bulls, depicting bulls, horses, and deer. However, to preserve the paintings, this cave is closed to the public. Tourists can visit a replica of the cave that has been constructed nearby and contains a copy of all the paintings present in the original cave. 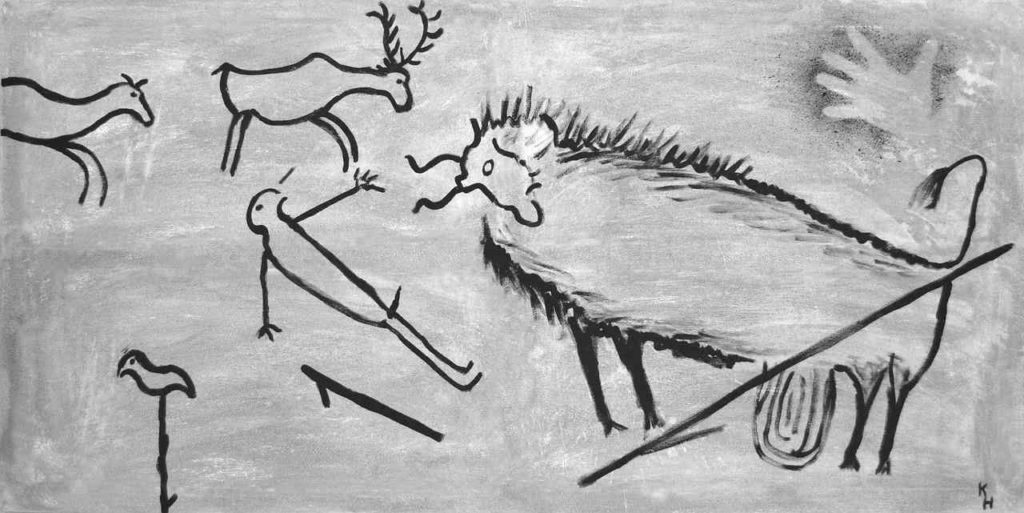 A cave painting is much more than a pretty picture. To those knowledgeable in the subject, it can provide a wide variety of information ranging from the climatic conditions of the time, the flora and fauna present there, type of communities and families and instruments used for daily chores. By analyzing the colors used for paintings, the type and placement of pictures, we can also gauge the technologies these people had access to.

These are the 10 most mesmerizing prehistoric cave paintings in the world. Do post your comments.