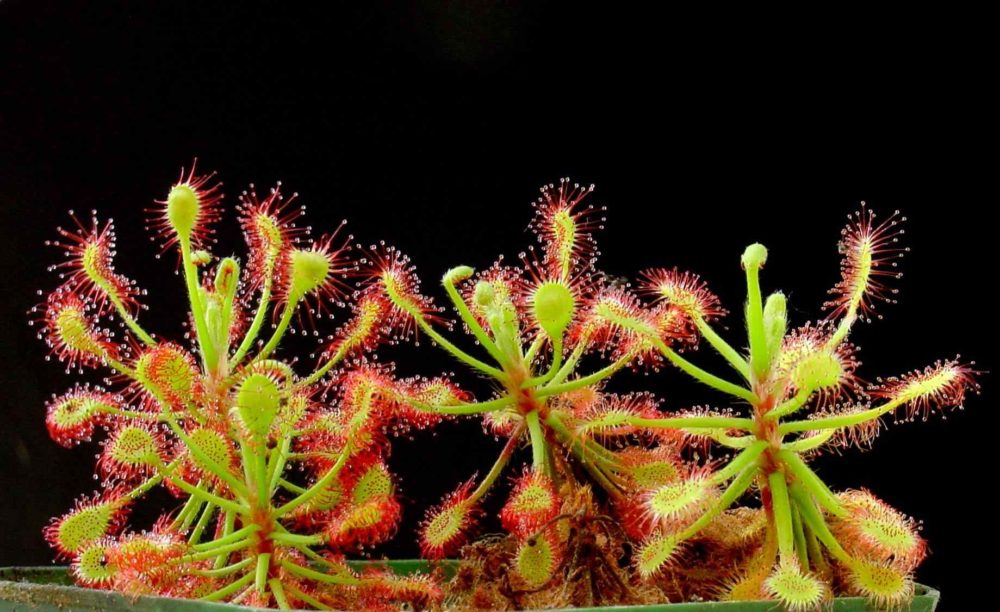 Carnivorous plants obtain most of their nutrients from its prey. They feed typically on insects and other arthropods. The unique characteristic of these plants to grow in thin soil acidic bogs and rock outcroppings and their ability to thrive in nitrogen deficient environment makes them different from another plant species.

True carnivore has originated independently in five different orders of flowering plants and includes classification of at least 583 species. They entice, decoy and kill their prey by absorbing available nutrients. There are 5 trapping mechanisms found: Pitfall traps, Flypaper traps, Snap traps, Bladder traps and Lobster-pot traps. I would like to show you 10 genera of these carnivorous plants species:

Nepenthes Hamata is a tropical pitcher plant in Sulawesi. This plant is characterized by an internal chamber, pitfall traps which attract prey with nectar bribes within the pitcher. The linings of these pitcher plants are coated with wax flakes which make it slippery for insects to fall into the pitcher. Within the pitcher, digestive enzymes are secreted to break down the prey into an absorbable form for the plant.

These plants are native to South China, Indonesia, Malaysia, the Philippines including areas of westward to Madagascar and Seychelles; southward to Australia and New Caledonia; and northward to India and Sri Lanka. The species love to thrive in lowland or highland varieties depending on how high these are from sea level. The name Nepenthes was first published in 1737 in Carolus Linnaeus’s Hortus Cliffortianus. 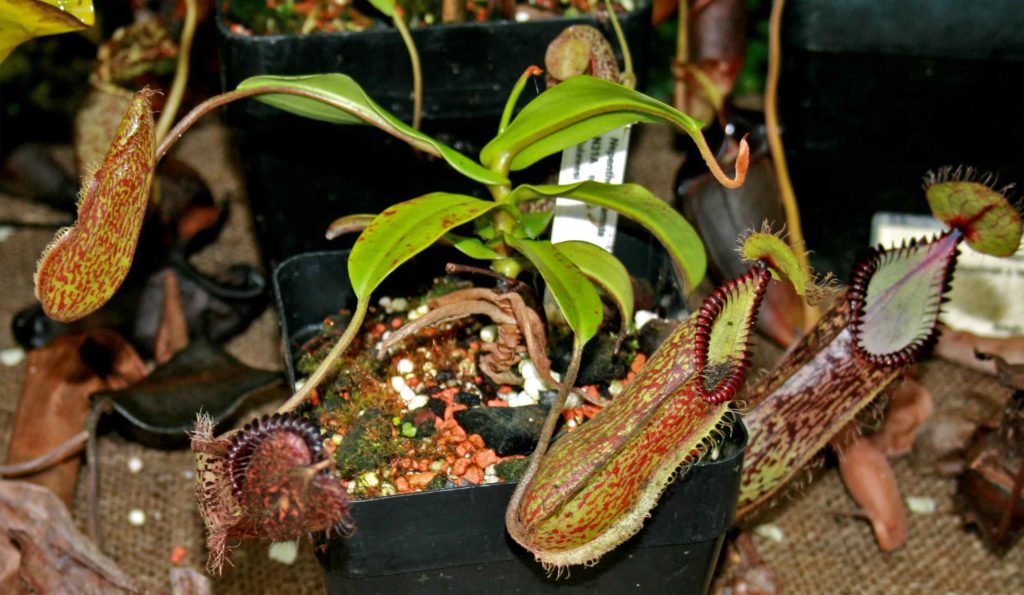 Roridula gorgonias is a protocarnivorous plant native of South Africa. This plant secretes mucilage, an adhesive substance to trap insects is extremely sticky, long-lasting and water tolerant. These plants cultivate symbiotic insects within them which aids in digesting the prey to receive its nutrients. Also, read about strange desert plants.

The Carnivorous Plant is known for its beautiful pink flowers and sticky leaves. The perennial shrub can grow upto 1 m or more and leaves are alternate and narrow and grow upto 120 mm long and seems crowded at the tips of branches. The leaves are covered with sticky hairs and can catch many small insects, however, rarely they can catch large insects such as wasps and bees. 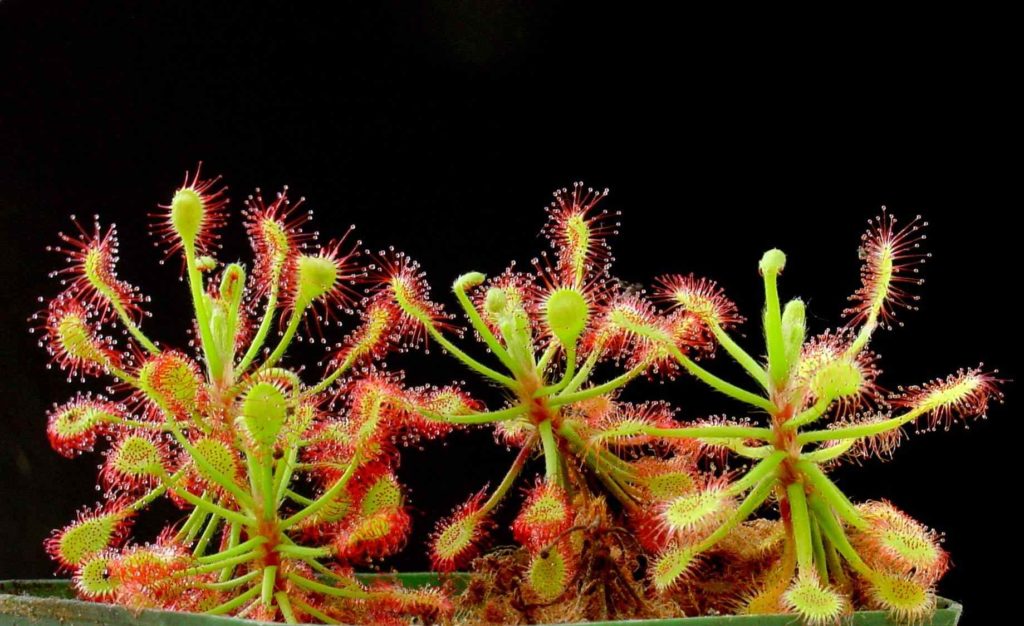 Dionaea is a carnivorous plant which grows on the East coast of the United States in North and South Carolina. This plant is structured to have a bulb like leaves which are covered with triggered hairs on their inner surfaces. The trap closes as soon as an insect or spider comes in contact with the hairs and secrets digestive enzyme to digest the prey. The trap reopens as soon as the digestion completes.

The carnivorous plant takes a week for larger insects to digest. When the prey is captured the flytrap secretes a liquid in a way that a human stomach functions. The digestive system of the plant species is slow it will take approximately 10 days to digest the insect and reopen its trap again. The plant species cannot digest exoskeletons and it will spill out when it will the traps again. The species lives in bog-like, coastal areas with 80% humidity. 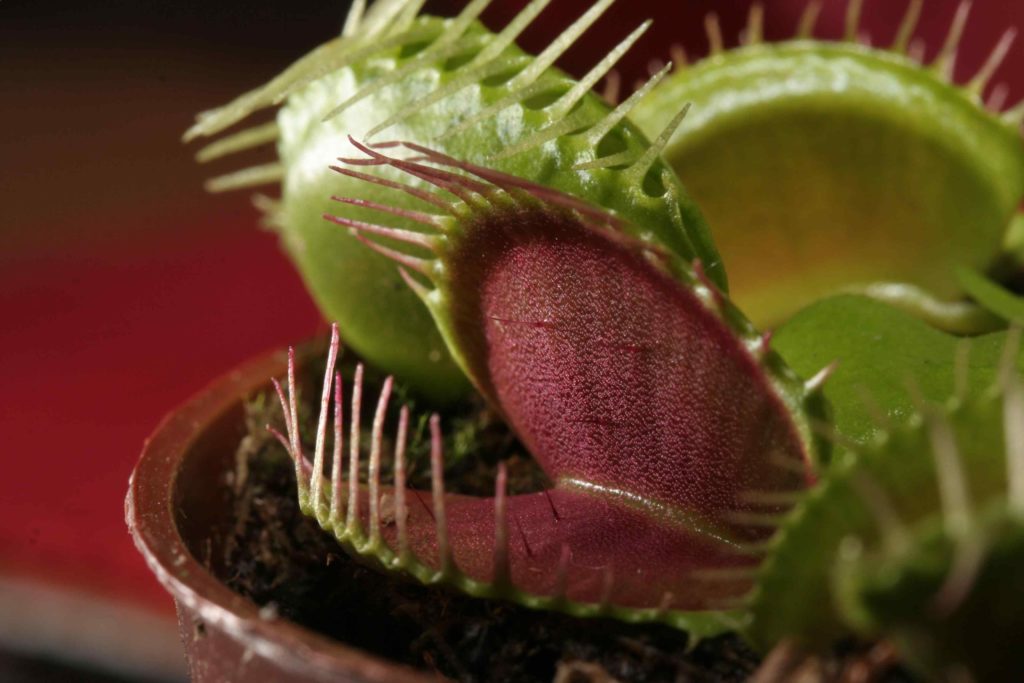 Utricularia also known to be the bladderworts. They grow in fresh water and wet soil around every continent except Antarctica. These carnivorous plants capture small organisms by means of bladder-like traps and generates a pressure from the interior to the exterior of the bladders as the water moves. As soon as the animal contacts the bristles at the surface of the door, the trap opens quickly and a gush of water sucks the prey inside. The door is closed and the animal is digested. You will also love reading about poisonous plants on Earth.

The carnivorous plant has about 230 species and mostly thrive in fresh water and wet soil as terrestrial or aquatic species. It can be seen in every continent except Antarctica and cultivated mostly for their flowers and resembles snapdragons and orchids. The trap of plant species can grow from 0.2 mm to 1.2 cm and have bladders that are usually larger and can feed on water fleas and even tiny fish. 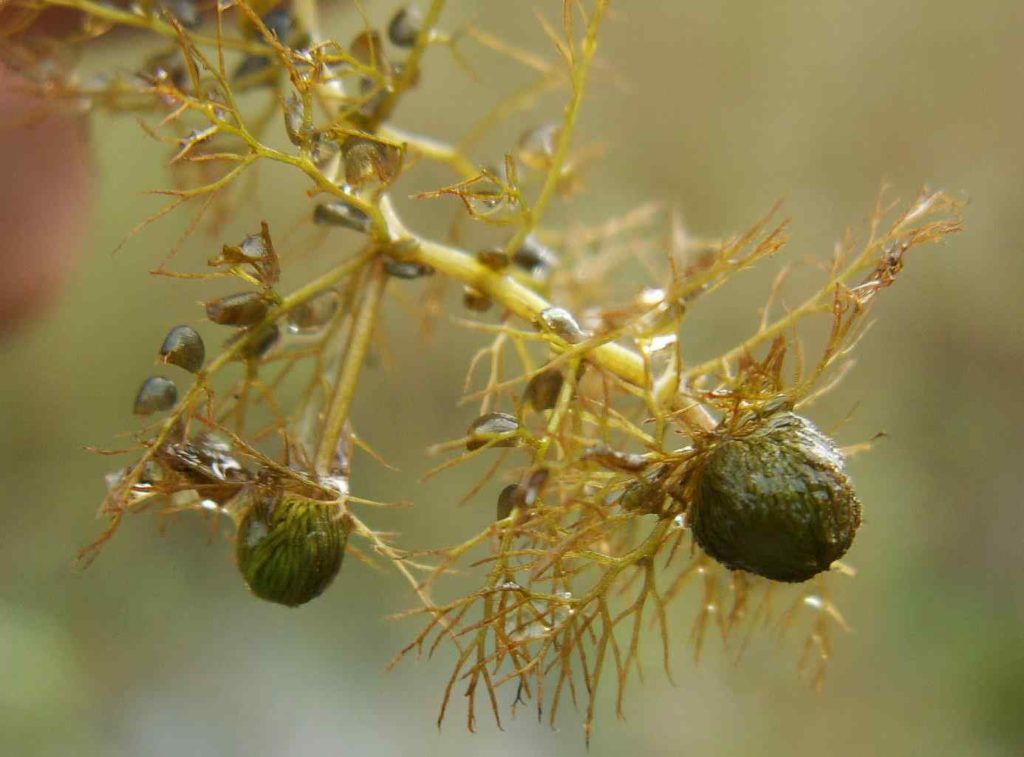 Darlingtonia californica also was known as California Pitcher Plant or Cobra Lily and is found in Northern California and Oregon. The name Cobra Lily is derived because tubular leaves of this plant resemble a rearing cobra and forked leaf with that of serpent’s fangs. The specialized structures within the plant increase the chances of prey to enter the trap for finding food and fan like appendages have nectar glands which aid in the movement of the prey into the internal pitcher chamber for the plant to kill the prey and carry out its digestion process.

Talking about the appearance, the carnivorous plant has tubular leaves and contains fluid that can digest trapped insects. The end of the leaf is hooded and have a circular opening through which insects can fly into the hood. The plant was discovered in 1841 by the botanist William D. Brackenridge at Mount Shasta. Later in 1853, it was described by John Torrey who named the genus Darlingtonia after the Philadelphian botanist William Darlington (1782–1863). 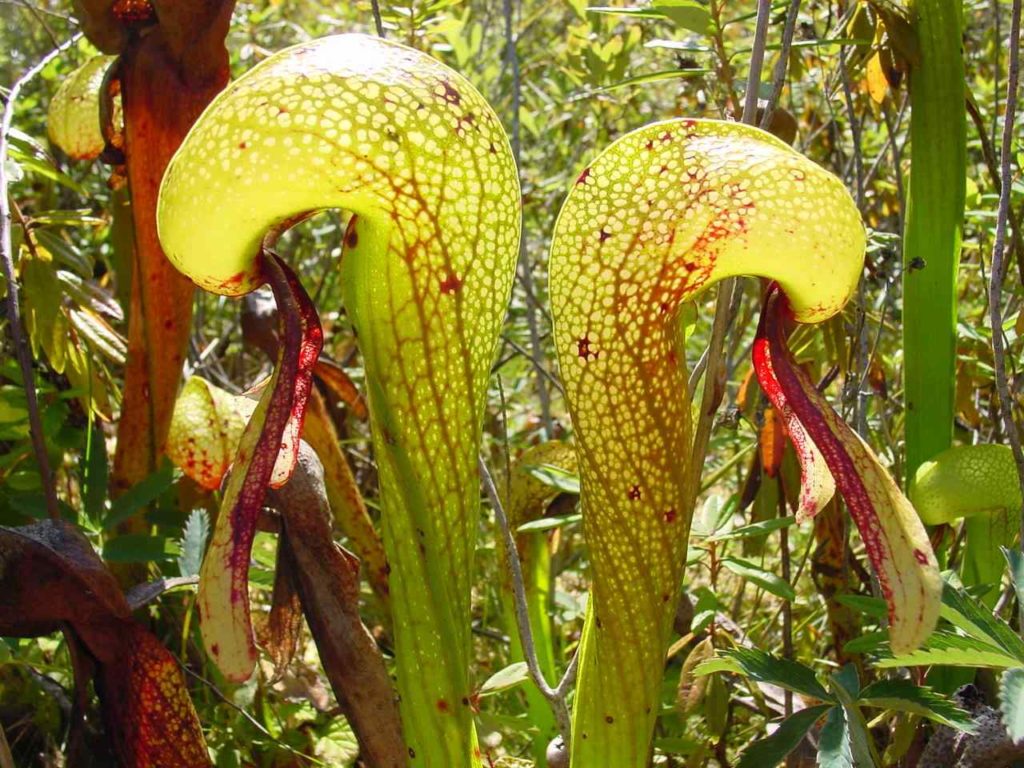 Drosera rotundifolia also was known as round-leaved sundew and is found across North America, Korea, and Japan. The leaves of this plants look like a rosette covered with mucilage, loaded with a sugary substance to attract the prey and secretes digestive enzymes to obtain nutrients. Additionally known as Sundews are carnivorous plants that are thick gluey goo called mucilage to trap and digest their prey. The species has at least 188 species and found everywhere on the globe except Antarctica. There are few years that can grow upto two or more years, however, rest can grow for only one year and reproduce by seed. 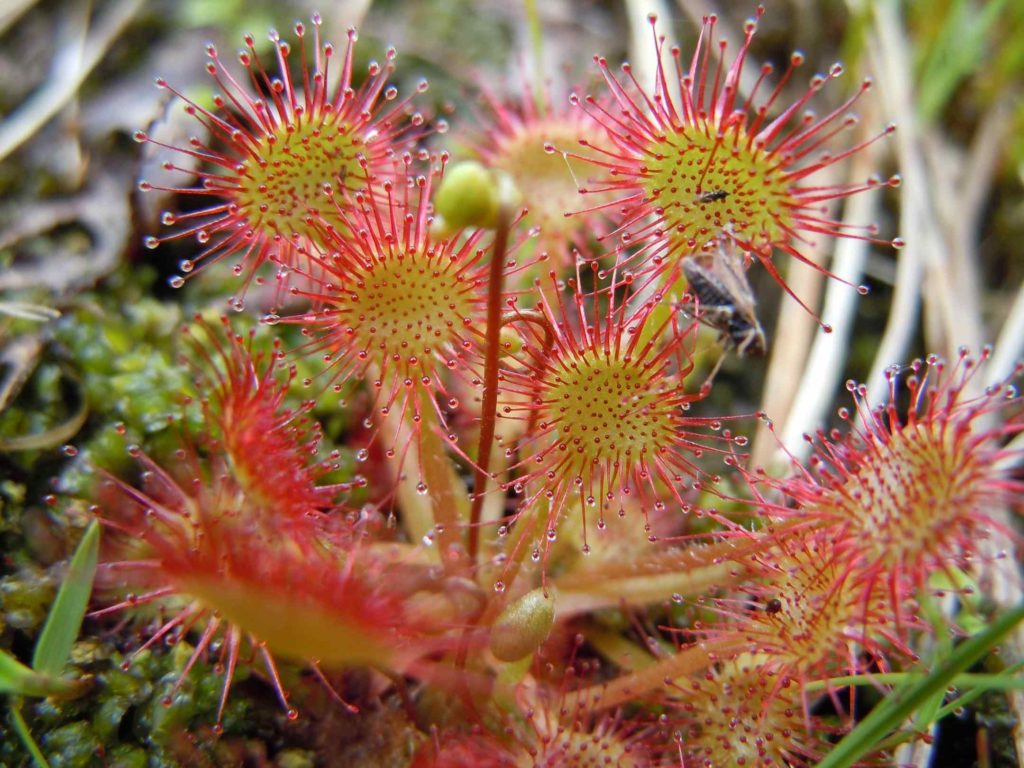 Byblis commonly called as Rainbow plants and usually grow in Western Australia. The surface of the leaves of these species is covered with glandular hairs and secrets mucilage substance to attract the prey. These leaves are secrets digestive enzymes because they are equipped with sessile glands. 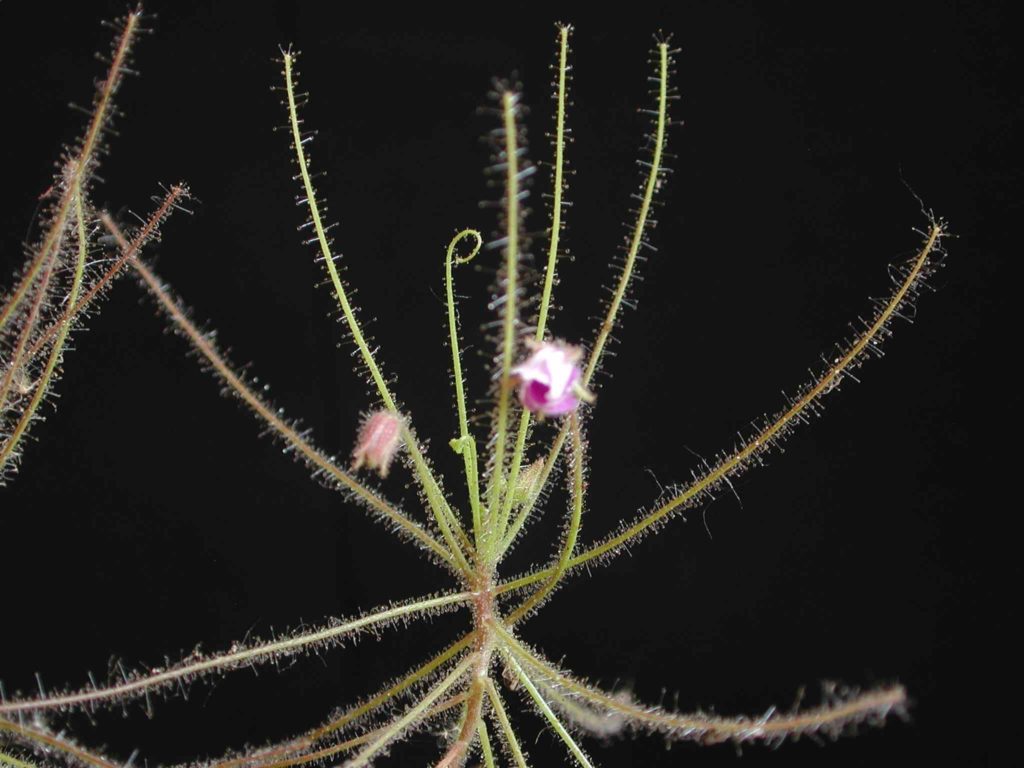 Aldrovanda also called as Waterwheel plant found in Europe, Asia, Africa and Australia. The trapping mechanism is like the Venus flytrap and consists of two lobes which fold together underwater. The trap closes in 10 – 20 milliseconds as soon as the insects trigger the hairs and mostly feeds on invertebrates. We also want you to read about effective medicinal plants. 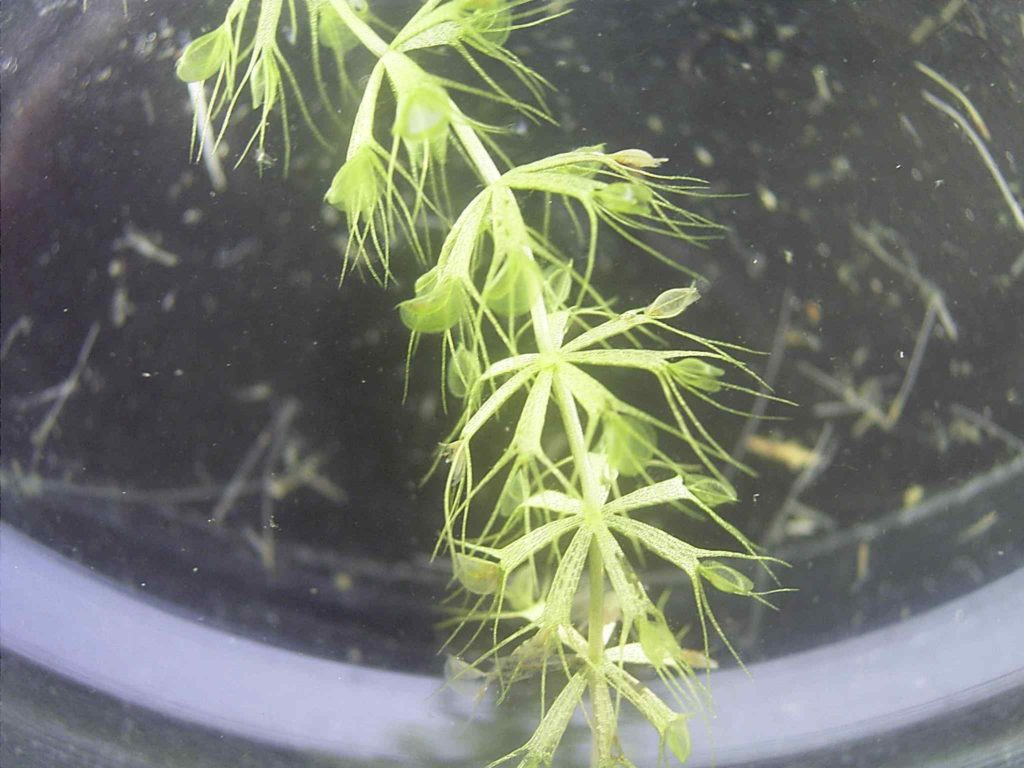 Cephalotus follicularis is an Australian pitcher plant and has a very small distribution in Southwestern Australia. Trapping mechanism is similar to the pitcher plants. The entrance of the trap has a spiked arrangement which allows the prey inside and hinders its return and the lid of the entrance prevents the rainwater into the pitcher which dilutes the digestive enzymes to absorb the nutrients from the prey. 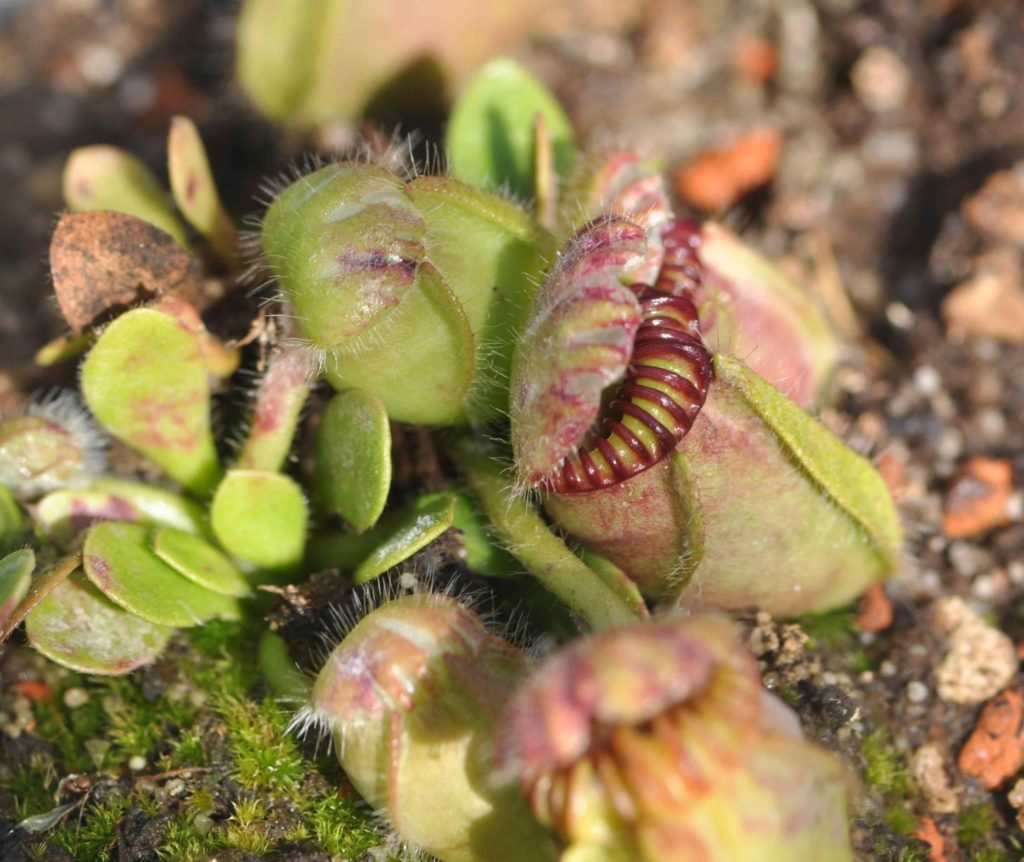 Brocchinia reducta is native to Venezuela, Brazil, Colombia, and Guyana. These species form water storing cup with its overlapping leaves. These leaves are coated with loose, waxy scales and are reflective of Ultraviolent light. Most of the insects are lured by Ultraviolet and besides these water cups emits a sweet odour which attracts the prey and eventually drowns them. The digestive enzymes and bacteria aids in digestion process and nutrients are absorbed by the leaves. 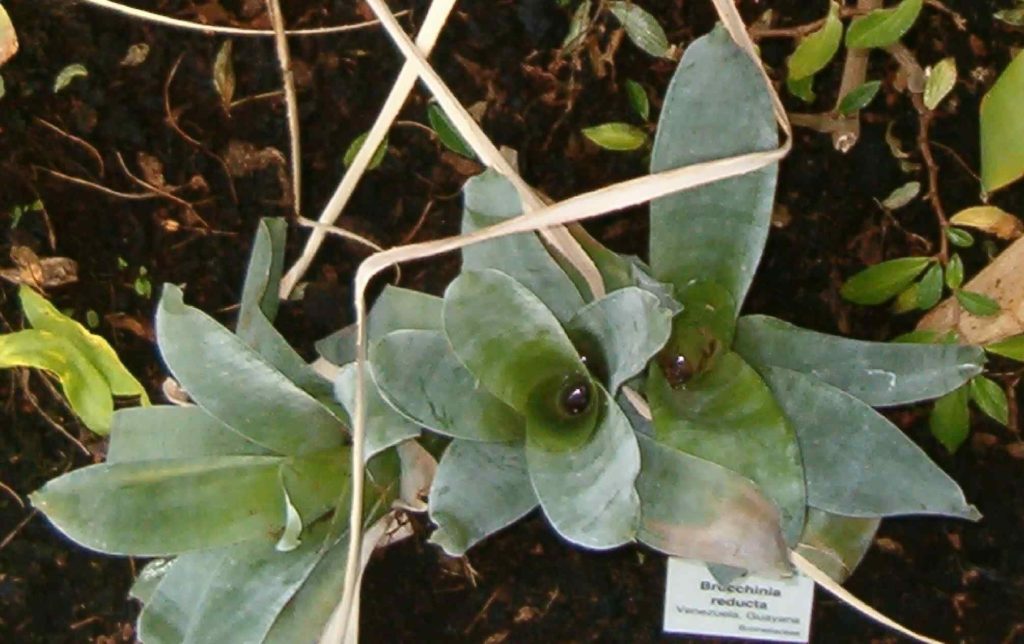 These carnivorous plants do consist of some predatory species that primarily derive its nutrients from insects and arthropods but not man-eaters. However, it is good to be away from taking a close sniff of these plant odours and avoiding the trouble!!!