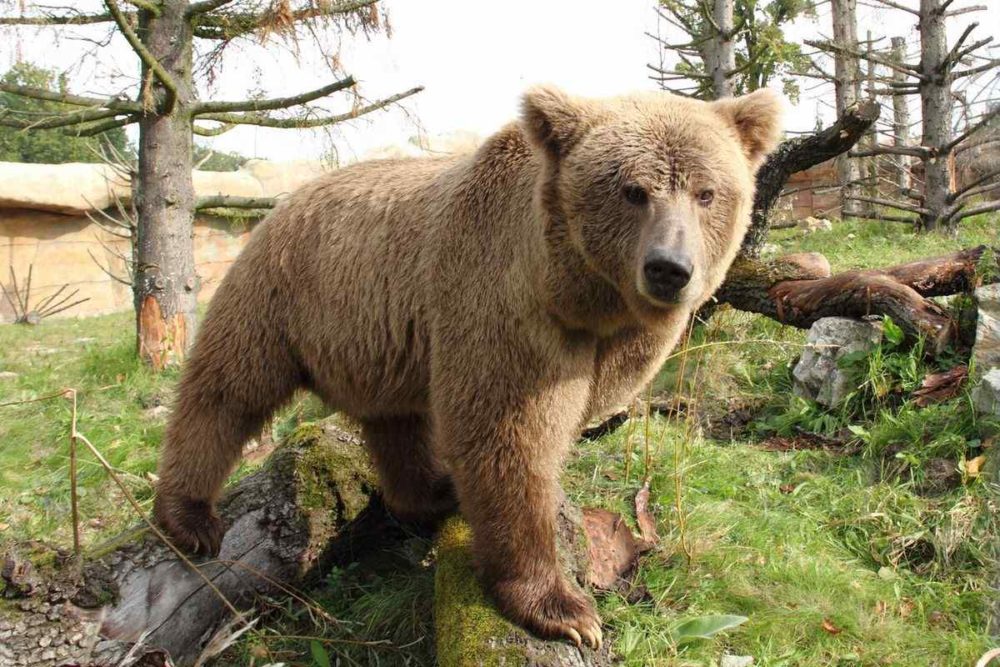 Bears are some of the most ferocious as well as most magnificent animals in the world. Although largely carnivorous, yet bears are more herbivorous in nature than any other carnivorous animal on Earth. Listed below are some interesting facts about the ten most carnivorous bears in the world.

Carnivorous Bears In The World

Popularly known as the Kodiak Brown Bear or the Alaskan Brown Bear, Kodiak bears are commonly considered the biggest and heaviest animals in the world and also the largest land carnivore in southwest Alaska. They are a unique subspecies of the grizzly bear or the brown bear, and the difference mainly restricts to the size between the two.

Known to live in the islands of the Kodiak Archipelago in southwest Alaska, Kodiak bears primarily to reach the sizes of about 300 to 600 kgs, while some have been recorded to exceed 680kgs. Due to their increased amount of encounters with the human population, the Kodiak bears are now getting poached for their fur and meat more often. They are scientifically known as Ursus arctos middendorffi.

Besides being regarded as the world’s largest land carnivores in the Arctic Circle, Polar bears are also counted among the most beautiful Albino animals in the world. Scientifically known as Ursus maritimus, Polar Bears are also among the biggest bears in the world and weighs almost as much as the Kodiak bears. They are found largely within the Arctic Circle, encompassing the Arctic Ocean, and are hyper carnivorous bears. Although most of them are born on the land and are terrestrial species, most adult polar bears spend a considerably large amount of time on the sea ice.

Scientifically known as Ursus arctos ssp., Grizzly bears are a large population of brown bears that are also commonly known as the North American Brown Bear as they are abundantly found in North America. The pronounced hump on the shoulders of these Grizzly bears is a good way to distinguish them from a Black bear as the color of their fur may vary from blond brown to almost black.

One of the apex predators in the world has another feature that distinguishes a Grizzly bear from a Black bear is its rump, which is lower than its shoulder. Although Grizzly bears are of the carnivorous order and their digestive systems are that of carnivorous animals’, yet they live on both plants and animals. They are usually omnivorous and can be easily ranked 3rd among the biggest bears in the world.

Scientifically known as Ursus americanus; the American Black bears are medium-sized bears that are native to North America. They are the continent’s smallest bears, yet can be ranked 4th among the world’s biggest bears as they are bigger than most bears in the world. They are mostly omnivorous bears as their diet consists of both plants and animals, also while varying greatly depending on the season and location. The American Black bears are also the most common species of bears that are found in the world.

They are also the largest carnivorous land animals and the biggest bears found in the continent of South America even though only 5% of their diet consists of meat. Spectacled bears are more herbivorous than most species of bears in the world and are arboreal animals. These bears got their name from the ginger-colored markings that they have across their face, neck, and chest.

Scientifically known as Ailuropoda melanoleucaand commonly known as the panda bear, is native to South Central China where they are considered as a national treasure. Although it belongs to the carnivorous order, yet they love to feed on bamboo shoots and leaves. Since 99% of their diet comprises of leaves and shoots, hence they are grouped under folivorous animals.

They are found in the mountains of Central China, mainly in Sichuan. Easily distinguishable by their luxurious black and white fur with black fur only on its ears, eye patches, muzzle, legs, arms and shoulders, the Giant Pandas have been listed as ‘Endangered’ in the IUCN Red List. They are often ranked among the biggest bears in Asia.

Popularly known as the Himalayan red bear, Isabelline bear or Dzu-Teh, the Himalayan Brown bears are the largest mammals in Northern Afghanistan, Northern Pakistan, Northern India, West China, and Nepal region. They are also one of the biggest bears found on the Asian continent. They are mostly omnivorous bears and are known to hibernate during the winter season which usually occurs in a den or a cave. Himalayan Brown bears are sexually dimorphic in nature.

Considered the slowest and laziest among all the bears in the world, Sloth bears are scientifically known as Melursus ursinus. They usually mate and breed during the summers and give birth to their young ones during the winters. They are a myrmecophagous bear species that are native to the Indian subcontinent. Their diet mostly consists of fruits, ants, and termites and is also known as Labiated bears due to their long lower lip, which they use for sucking out insects. These insectivorous bears have been classified as ‘Vulnerable’ on the IUCN Red List due to habitat loss.

Scientifically known as Ursus thibetanus, Asian Black bears are native to Asia. They are mainly found in the Himalayas, in the Northern parts of the Indian subcontinent, Korea, northeastern parts of China, the Russian Far East, the Honshū and Shikoku islands of Japan, and Taiwan and are commonly known as Moon bears or the White-chested bears. Despite being herbivorous animals, the Asian Black bears tend to be aggressive towards humans as they get frequently poached by humans for medicinal uses. They have also been classified as ‘Vulnerable’ by the IUCN Red List.

Popularly known as the ‘Honey’ bear, Sun bears are mostly found in the tropical forest areas of Southeast Asia. They get the name ‘Honey bear’ for their great appetite for honey and honeycombs. Sun bears are scientifically known as Helarctos malayanus and have been listed as ‘Vulnerable’ by the IUCN Red List. It is also listed as one of the most aggressive animals in the world.

These are the the ten most carnivorous bears in the world. Do post your comments.