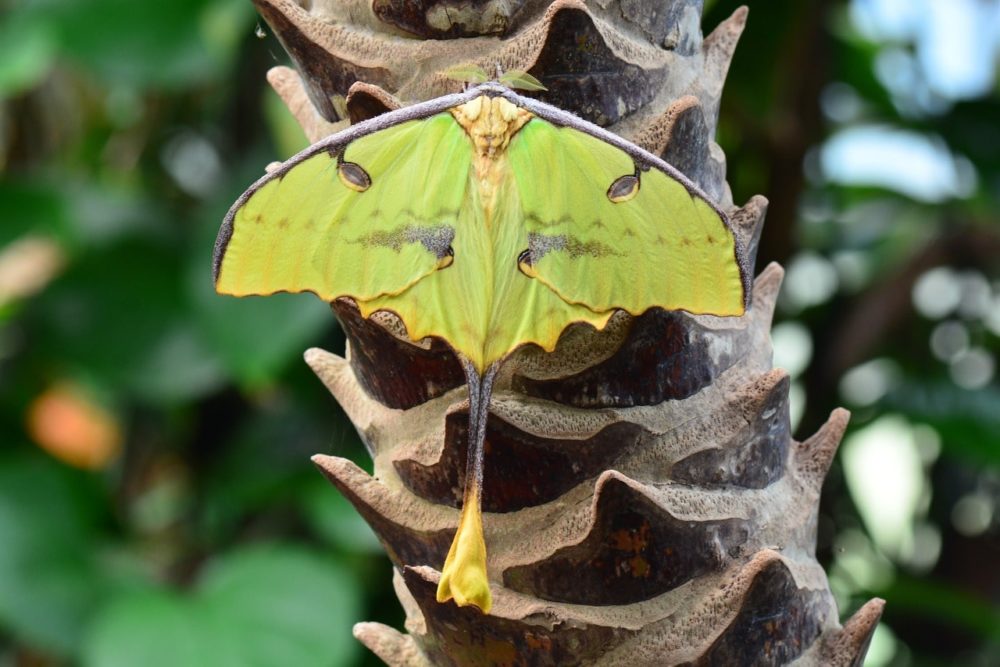 Butterflies are not the only beautiful insects in the world. Several moths are ravishing to look at as well. Both moths and butterflies belong to the same insect group called Lepidoptera. But unfortunately, almost all moths are nocturnal, and we do not get to witness their splendor usually. But now we bring you the top ten list of the most beautiful moth species from across the world.

Atlas moth is one of the largest moth species in the world and also, undisputedly the most beautiful and it takes number one spot in our list. Found in tropical and subtropical forests of Southeast Asia, this moth can have a wingspan up to 11 inches!  Atlas moths are rusty brown in color with outlines of yellow, purple and red.  Another interesting fact is that the wingtip of this moth resembles a snakehead which can be used to scare away its predators. The name ‘Atlas’ refers to the intricate designs and patterns on its wings.

The Garden Tiger moth is striking colorful, having chocolate-brown forewings and bright red hindwings. These moths are widespread and are found throughout the world especially in Eurasia and North America. They have really attractive wings with black spots on them and these bright wings also convey the message to its predators that it is unpalatable.

The Madagascan moon moth has a short life, living for only about a week. What makes this moth so attractive and striking is its long, red and yellow tails which can also be used as a defense against predators. As the name suggests, these moths are found in the rainforests of Madagascar.

The Cecropia moth is the largest native moth in North America and can have a wingspan of up to 6 inches. These moths are famous for their large size and bright coloration. They are found in the rocky mountains of the United States and most provinces of Canada. It has a bright red body with splendid reddish-brown wings with white stripes. But these moths are difficult to be spotted as they are mostly active only during the night.

Luna moths are mostly found in the deciduous forests of Canada, the United States, and Mexico. They have a large wingspan and the color of its body is as eye-catching as its wingspan. It has broad, light green colored wings and dazzling eyespots on its fore and hindwings. The wings are not entirely green as the edges have a dull blue color. The long, curly tails on each of its hindwings also give it a mesmerizing look.

This species is also called the ‘Army green moth’ and you can obviously see why. It has a pale green body with its wings having distinctive white stripes. It is named after its main food plants – oleander. Its alluring coloration helps to camouflage it against its vegetation. Oleander hawk moths are native to Europe, Asia, and Africa.

The Giant Leopard Moth is distinguished for its captivating coloration. It has bluish-black spots on its glistening white wings. They are impressive in size as well with a wingspan of 2 to 3 inches. Giant leopard moths are found in woodlands and farmlands all across America. But these moths are strictly nocturnal, so it is difficult to spot one despite its bright color. The Giant Leopard Moth is also called as the ‘eyed tiger moth’.

Rosy maple moths are endemic to the forests in eastern North America. They look fluffy, with pink wings and have a bright yellow or cream-colored body. These colorful moths feed mainly on maple, including red and sugar maple, so much so that it can be even considered as pests.

These moths are spread across South and East Asia, found in countries like China and Myanmar. They have long and narrow fore wings. They have a bright yellow body with purplish spots and bands on its body as well as its wings. This moth is also called the ‘False Tiger Moth’.

The cinnabar moth is a colorful, beaming moth found in various parts of Europe. It has very bright wings and it is well known for the red markings on its forewings and its gorgeous scarlet hindwings and its bright orange body. This not only increases its beauty but also serves as a warning to its potential predators. These moths are mostly active during night times but they can be found throughout the day too.

So, there it is, the top ten list of the most beautiful moth species from across the world. Please let us know what you think in the comments.