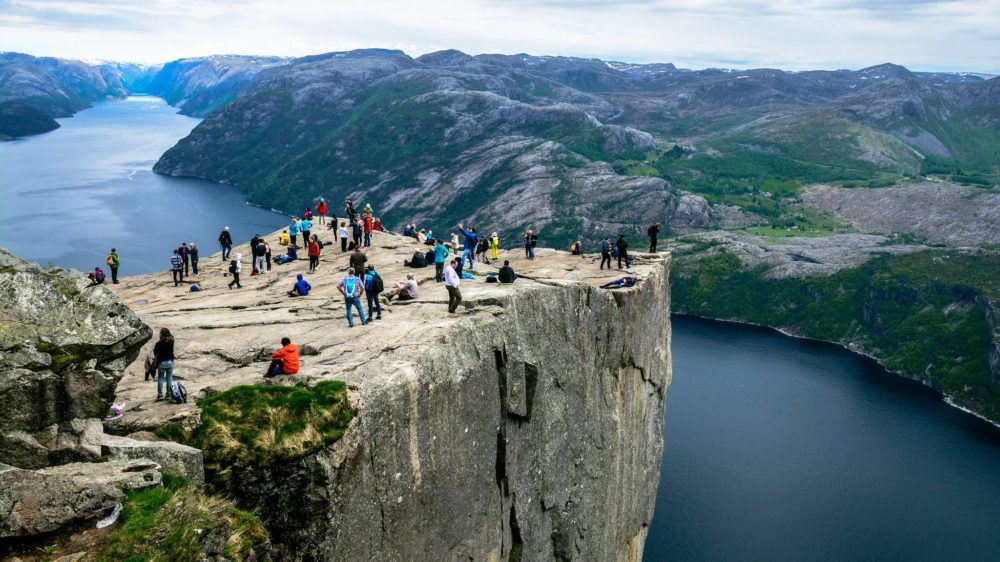 Originated from the word “fare” which means travel, Fjords means the one which travels. Another spectacular creation of mother nature, a fjord is a deep, slender and elongated sea or lake drain surrounded by steep land on three sides. The mouth of the fjord opens towards the sea which is usually shallow. The inner part of the fjord is known as the sea bottom. Fjords offer such spectacular views that thousands of tourists are drawn to its beauty. Fjords are results of carving creativity of glacial activity. Let’s have a look at top 10 spectacular fjords around the globe.

Being North America’s southernmost fjord, the spectacular Howe Sound resides northwest to Vancouver. It is popularly known as the playground of Vancouver because of being the host of activities like sailing, diving, camping, hiking. Howe Sound is enclosed by magnificent peaks which rise straight out of the sea. What makes Howe sound so special is the fact is this is the world’s southernmost fjord. Several islands are found in Howe Sound. It stretches for 42km starting from West Vancouver northwards to Squamish. Tourists from all over the world visit Howe sound and contribute a lot to this Fjords economy.

The scenic route of Lysefjord is breathtaking enough to feed your soul. One can soak in the elegance of nature while on the journey through peaceful waters. Lysefjord extends up to 40 kilometers is surrounded by captivating mountains. Formed during the ice age by enormous icebergs, Lysefjord is situated in Rogaland country. Undoubtedly, one of the most distinctive and astonishing fjords, Lysefjord is very straight. A boat trip on this spectacular fjords offers a mesmerizing experience to absorb in the beauty of nature. From waterfalls to Mountains, this boat trip offers it all.

Misty Fjords are undoubtedly a natural mosaic of sea crag, arduous fjords and rock walls projecting upto 3000ft straight out of the ocean. Visitors are mesmerized by its blue glacial ponds, huge soaring waterfalls, and mountain peaks topped with snow. Residing just 22 miles east of Ketchikan, the picturesque Misty Fjords is named so because if its precipitating nature. It is habitat to diverse wildlife from the brown bear, wolf to bald eagles. Kayaking offers a good experience while visiting this Fjord.

On the banks of the Kenai Peninsula resides Kenai Fjords in Southcentral Alaska, USA. The main attraction of this place is its 40 glaciers. Although almost half of the park is covered in ice, still Kenai Fjords offers lots of astounding views and unbelievable activities. It earned the title of a national park in the 1980s which was hardly two years later of getting recognized as a national monument by the presidential manifesto.

The Kenai Fjords National Park is opened 24*7 all 365 days but it is accessible for hardly 3-4 months in a year. During winters, the park is entirely covered with snow and once, hence closed to traffic. Because of the rough seas, the coastal rural areas are unreachable during late-fall and early-spring. The best time to visit Kenai fjords is during the months of June to August.

Aysen Fjords is situated in Patagonia, Chile. It is the least populated area of Chile. Because of its harsh climate, it wasn’t inhabited until the 20th century. Although the climate here is harsh, it offers incredibly beautiful views. Undiscovered mountains, astonishing fjords, crystal clear rivers and hanging glaciers contribute together for making it a traveller’s dream. Though reaching Aysen is no easy task, but it is such a masterpiece that it’s worth the journey.

Geirangerfjord is UNESCO protected fjord enclosed by splendid snow-covered cliff peaks, verdant greenery and wild waterfalls which makes it a spectacular sight. This astonishing creation of mother nature never fails to impress anyone. The sound of thundering water falling from the mountains can fill you with delight.

Geirangerfjord is like a paradise for nature lovers. From sightseeing to hiking and kayaking, this place offers it all. Geiranger not only provides an amazing experience to visitors but also preserves nature and is in the process of getting certified as a Sustainable destination. Geirangerfjord was formed during the ice ages and today, it is often featured as one of the top spectacular sights of the world.

Located in Fiordland, in the far south-west of New Zealand, Doubtful Sound mesmerizes visitors by the ambience of powerful solitude along with magnificent beauty of Doubtful Sound. Some people call this fjord as ‘the Sound of Silence’. Doubtful Sound is a habitat to a diversity of flora and fauna, unique Fur Seals of New Zealand and Fiordland Crested Penguins. Being 421 meters deep, this is the deepest fiords in the whole world. Doubtful Sound can be visited by kayak, scenic flight or a day cruise. Anyone who is interested in the sound of silence can also take an overnight cruise or kayak experience.

The Naeroyfjord is the most exquisite and wildest arm of the Sognefjord. UNESCO has inscribed it as World Heritage list. This fjord is surely one of the most astounding natural attractions in Norway because of its lofty mountainsides, dangling valleys, snow-covered mountain peaks and waterfalls. This 17 km long Fjords is very dramatic as its narrowest point is only 250 m wide.

Milford Sound resides on the west coast of the South Island of New Zealand and is one of the most popular tourist’s destinations of New Zealand because of its breathtaking natural features which offer spectacular scenery. Rudyard Kipling described this fjord as the ‘eighth wonder of the world’. Glaciers carved Milford sound back in the ice ages. Waterfalls, mountains and sea all enhance the beauty of Milford Sound and it is spectacular in all the seasons. But during the rainy seasons, it’s beauty increased magnificently. The fun is doubled by activities like kayaking, flightseeing, diving, hiking, trekking and boat cruises.

This fjord lies on the west coast of Greenland. Ilulissat icefjord features one of the fastest and most active glaciers in the world which moves at a pace of 9 meters per day. This fjord is declared as World Heritage site by UNESCO in 2004. Hiking and cruise ships are a source of recreational activities. The scenic beauty doesn’t fail to attract a lot of tourists.