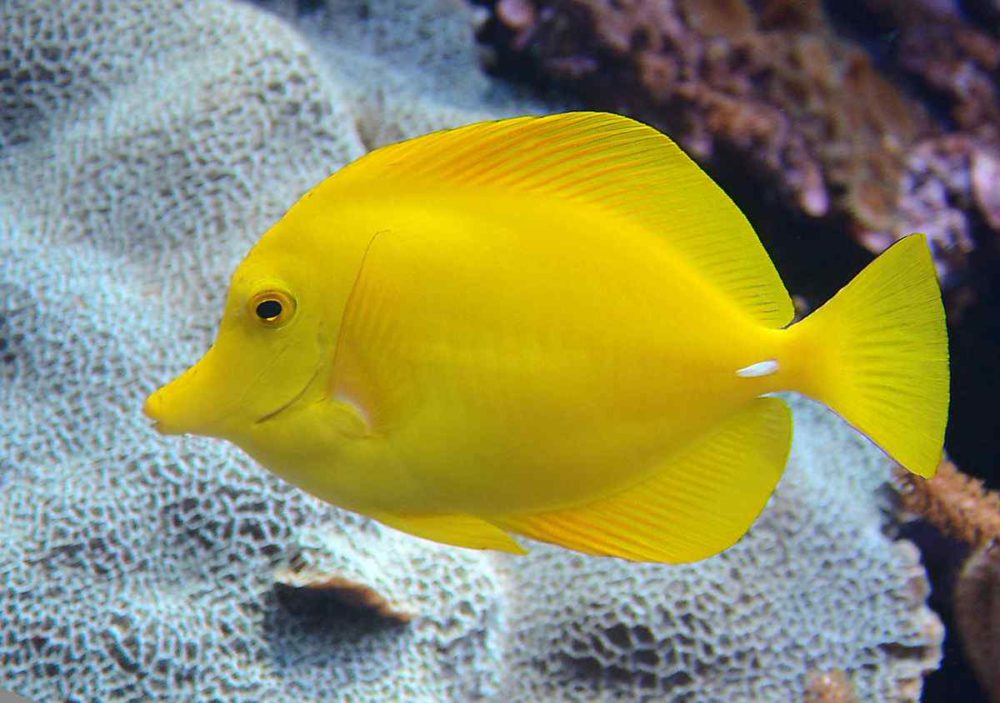 Just imagine why people spend so much money and effort to buy aquariums. The reason is very simple because fishes are one of the most beautiful species because of the colourful patterns and beautiful fins. There are many aquatic animals especially fishes which use mind-blowing superpowers to survive.  We have discovered many beautiful species and still counting but indeed Fishes are one of them. So, here we are listing the top 15 most beautiful Fish in the world.

One of the most attractive and beautiful fishes in the world are capable of “perching” themselves on their pelvic fins. These fishes are reef dwellers and love to live in sheltered lagoons and inshore reefs. It is one of the peaceful and slow-moving fishes in the world. 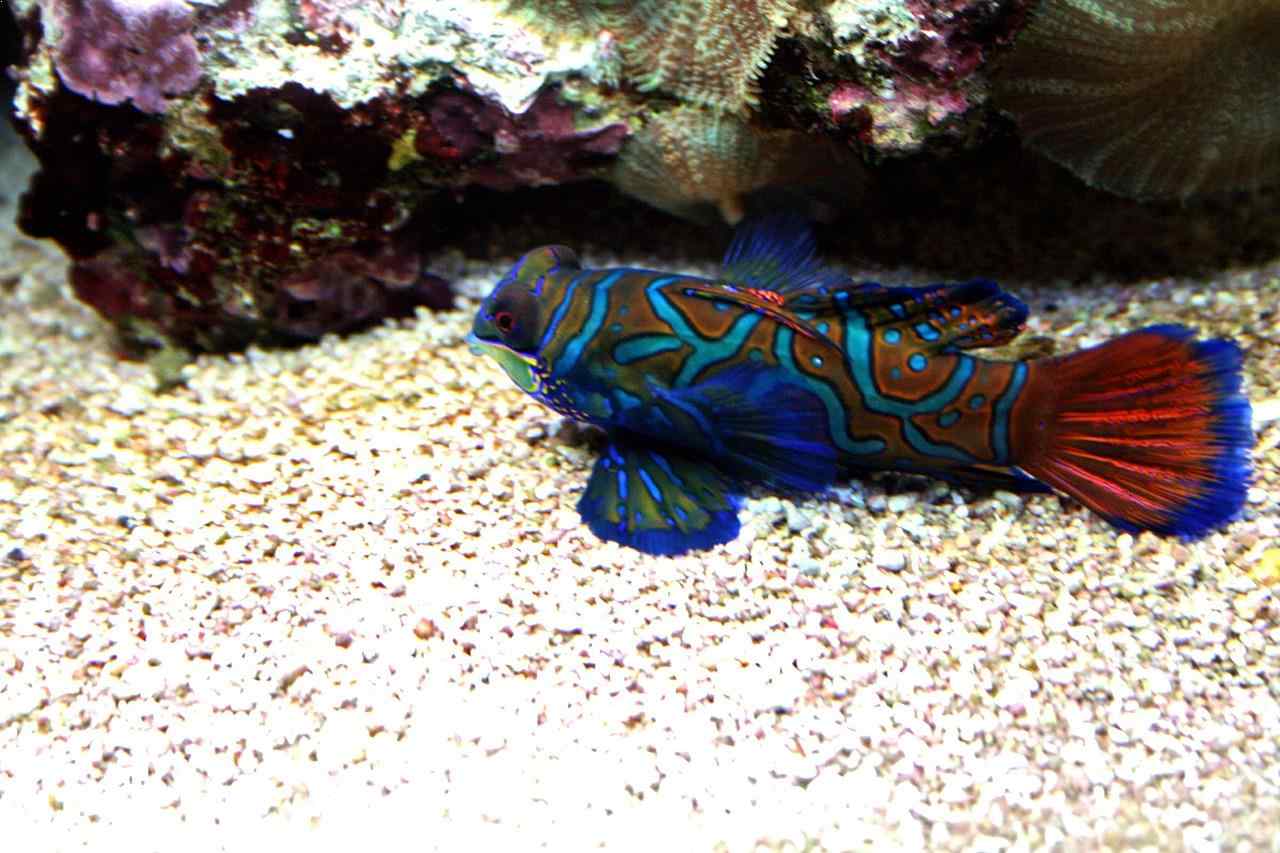 A unique feature of Discus Fish is that there are too many colour variations. It is basically found in the Amazon River Basin. They are also known as Pompadour Fish. It is the most popular and beautiful freshwater aquarium fishes in the world. This can be a drawback because it’s too complicated to handle this kind of fish.

This kind species of fish is also too much costly costing over 50 dollars to 70 dollars per piece. Also, read about facts about starfish that will surprise you. These fishes are very social and calm temperament in nature. They have varied stains that include solid, spots, or striated. Additionally known as “the king of the aquarium.” available in multiple colours and patterns. 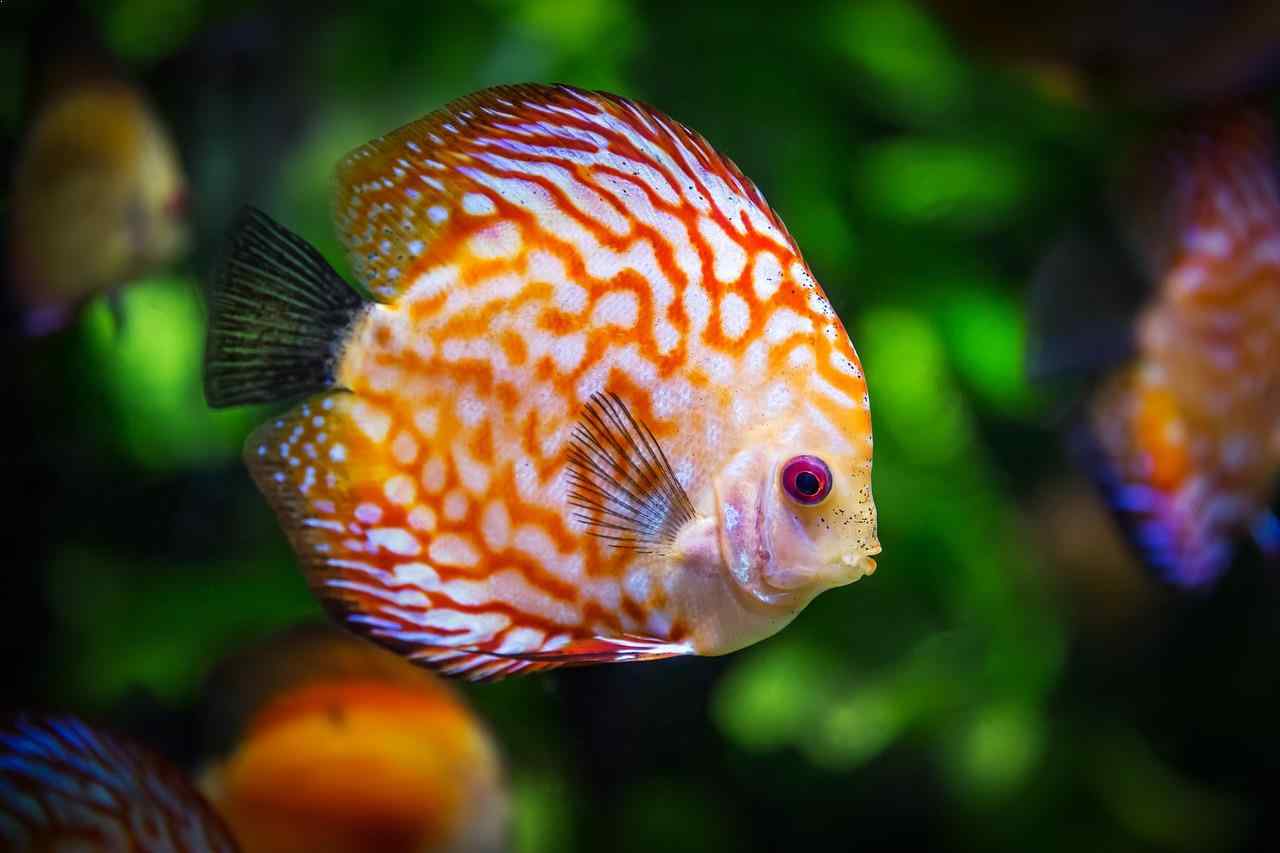 The Moorish Idol is also one of the most different and beautiful that exists today. It belongs to the historic fish family  Zanclidae. The sad truth is that the lifespan of the fish is too short. This is also the reason why this kind of fish is difficult to put in an aquarium. The fish was named after the Moorish community of Africa. The Moorish people considered that it is a talisman of good luck. Though the lifespan of the fish is small still it is one of the most beautiful fishes in the world.

It is one of the most difficult fish to keep because of their difficult feeding habit. Usually, they come under peaceful fishes that require the large tank to swim. They are compatible with most fishes including larger invertebrates, however, should not be kept with any polyps or corals. Also, Small invertebrates may be threatened as well. Also, read about amazing bioluminescent animals on planet Earth. 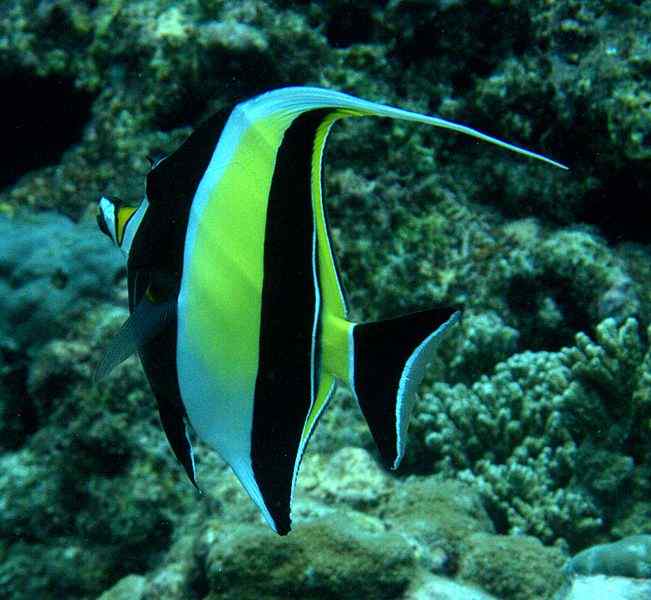 It is also known as Flaming Angelfish and Japanese Pygmy Angelfish. It is one of the brightest coloured fish alive now that adds beauty in folds. It is basically found in the Pacific Ocean and west of Hawaii. They are the most popular aquarium and beautiful fishes because they can eat virtually any food. These are one of the most difficult to breed in an aquarium and hence known as hermaphroditic.

Both male and female variants are similar in appearance and love to eat Spirulina, marine algae, high-quality angelfish preparations, mysid or frozen shrimp, and other high-quality meaty items. It also requires a large tank to swim with places to hide for grazing. You will also like reading about deadliest fishes in the world. 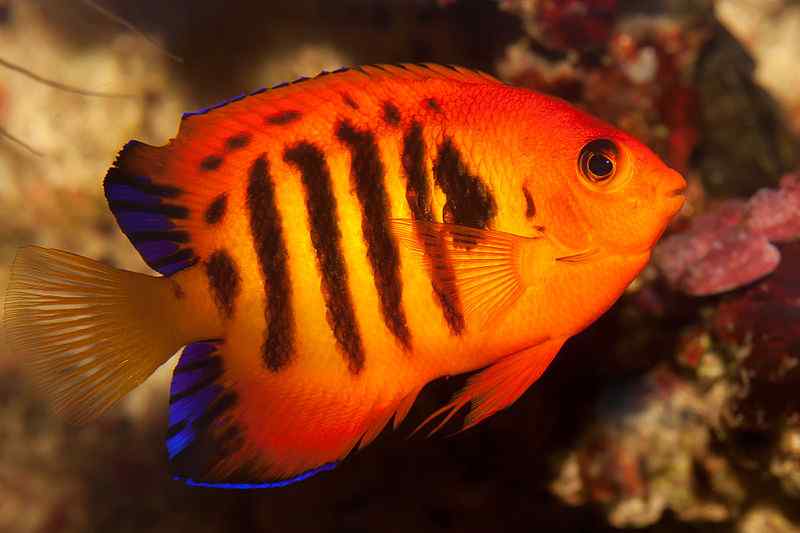 Regal Tang is also known as palette surgeonfish or a blue tang. Regal Tang became famous in the movie Finding Nemo in which it is featured as a character. It is basically found in the Eastern Pacific. Though the fish is very popular but still very prone to infections and diseases. It is one of the most beautiful fishes in the world.

These fishes have a sharp and venomous spine at the base of their caudal fin or tail fin to protect themselves from the predators. The caudal spine of regal tang contains a toxin that can cause severe pain to its predators and also to humans. It is mostly seen in the Pacific Ocean, however, now they are seen in Indian ocean as well, according to the International Union for Conservation of Nature (IUCN). Regal tang loves to eat algae suing their sharp and small teeth to help their coral protectors clean. 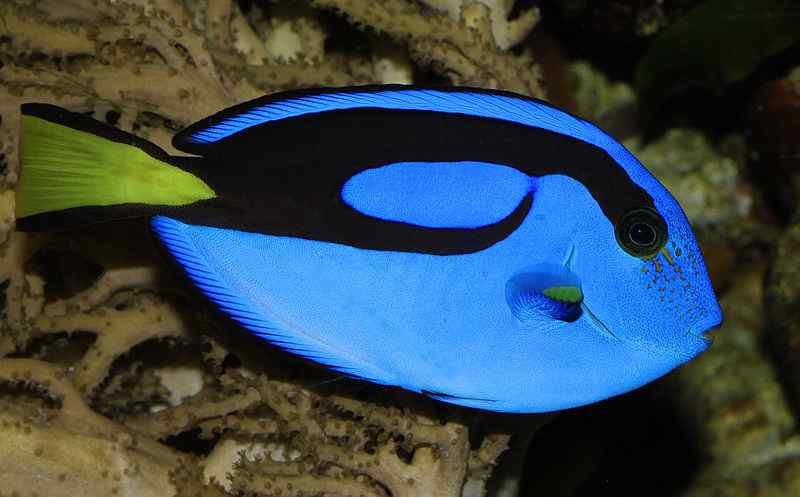 There are around 90 kinds of species of parrotfishes exist in the Ocean. It is named as Parrotfish because of the hook-shaped beak. They are very important for the survival of coral reefs because they eat seaweed and other pests. They are also not at all suitable for the aquarium because of the unusual eating habits. 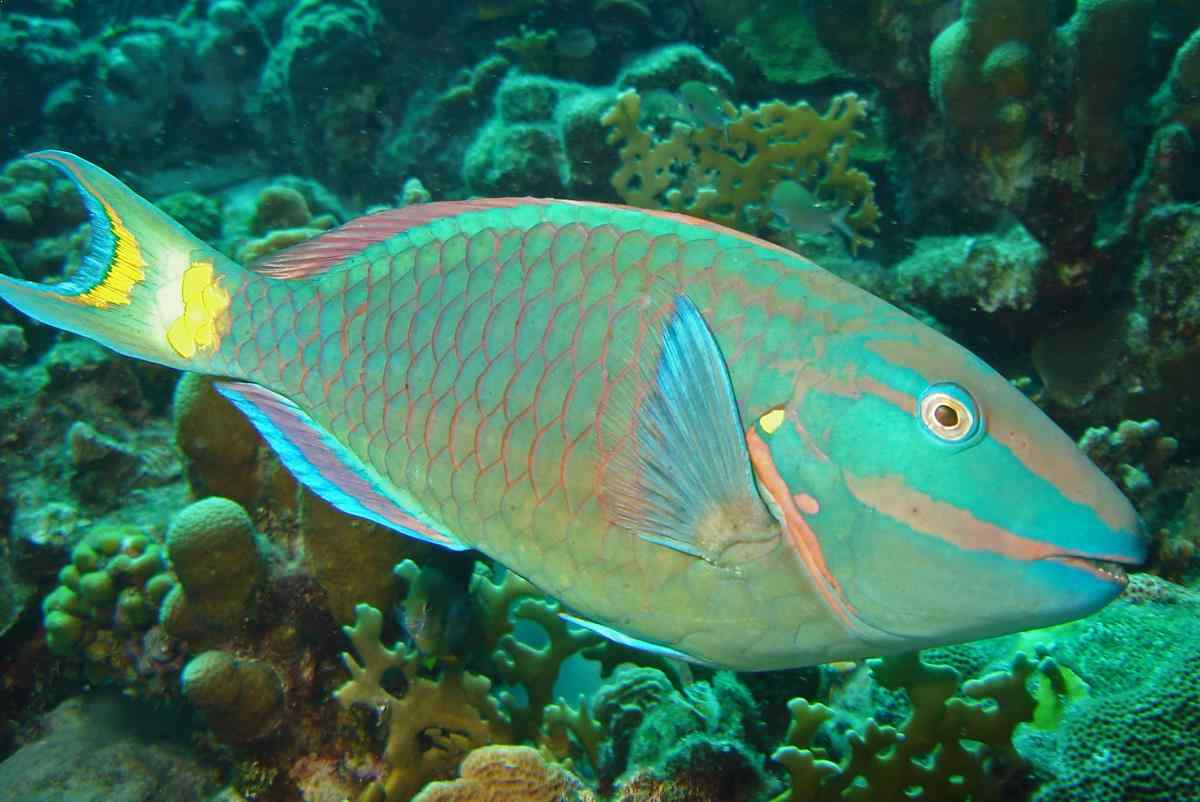 They are one of the most beautiful fish among all fishes alive today in our Oceans. They are also one of the most suitable fish for the aquarium. Out of the 43% of the marine ornamentals that was sold all around the world are Clownfish. They also seem very good parents because when a young one comes they usually form colonies to protect them. Clownfishes are considered as poor swimmers and therefore they spent most of the time hiding in the water.

These fishes are attacked by stingrays, sharks, eels and other big fish, however, it is difficult to spot them in the water. The biggest predators of these fishes are humans because they catch them to put it in aquariums, however, ocean pollution, destruction of the habitat and overfishing are also some of the reason in decline of their population. Deep-sea creatures like Whale and Dolphin comes under the list of intelligent animals in the world. 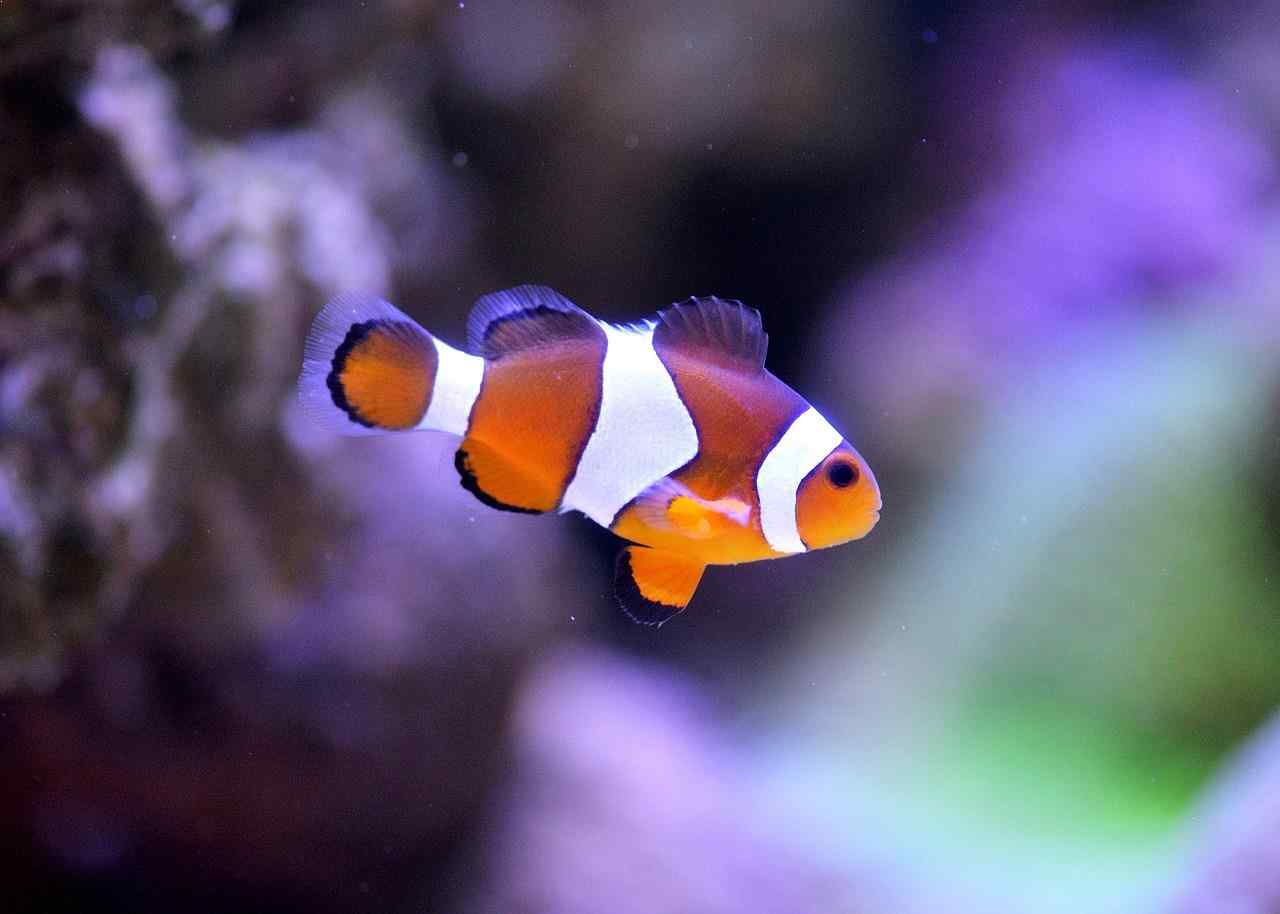 They are usually found in Banggai Islands of Indonesia. Banggai Cardinalfish is endangered because of the overfishing. It is also most popular for the aquarium trade. They belong to the cardinalfish family Apogonidae. They are basically 8cm in length. It is among the relatively few marine fishes to have been bred regularly in captivity, but significant numbers are still captured in the wild.

Talking about the appearance, fishes have elongated fins with striking patterning on the body. The shiny and silvery body marked with three vertical black bars, one is running down the head and other towards the fish flanks and between the bars of the body is marked with dots which can form a unique pattern. There are many fishes, not this one which comes under most terrifying deep sea creatures. 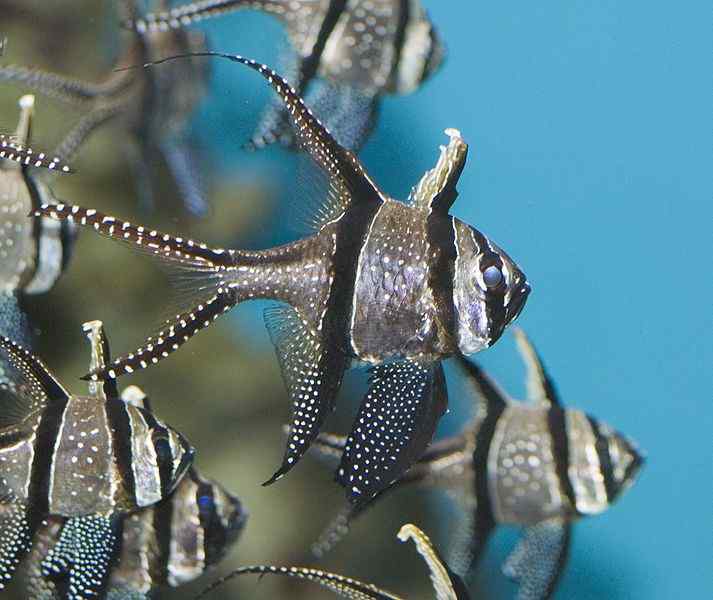 They are also called yellow face angelfish. The uniqueness of these fishes is that the face is brighter than the rest of the body. They are found in many places the Indian Ocean, Indonesia, Australia, Micronesia, and as far north as Japan. They usually form caves and lagoons for their survival.

Blueface Angelfish are prone to stress as compared to other fishes of the same size because when they are not provided with a large amount of swimming room they can further lack proper adult colouration and a shorter lifespan. Talking about the appearance, it has bright yellow dorsal fin has a deep blue dot, however, the deep blue face has a bright yellow or orange mask. 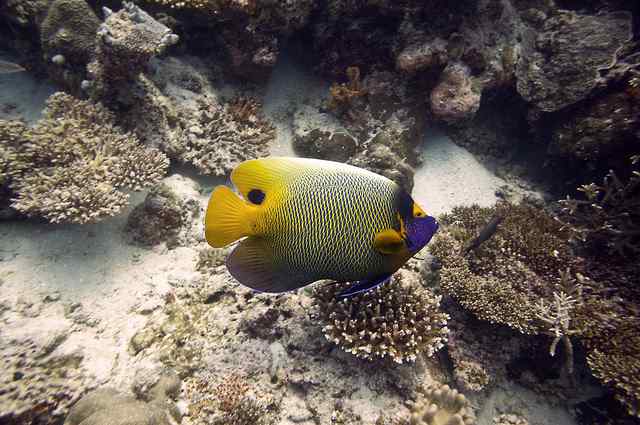 They are basically originated in the Indian subcontinent but now it’s popular all around the world. They are among the most popular aquarium fishes that exist today because it can eat both algae and most fish foods They also eat at times. They are available in many colours including blue and red flame making it one of the most beautiful fishes in the world. Dwarf Gourami is considered as peaceful fishes, however, when they are attacked they will not hesitate to take on others and can even kill them.

They require leaves, twigs, and plenty of vegetation to hide and build nests. In Nature, they love to live in waterways and paddy field in places like India, Assam and Bangladesh. Their natural habitat should be equipped with thick vegetation and hence they are seen in the Ganges River. Talking about the appearance, male dwarf gourami is bright red or almost orange with blue-green vertical stripes and a blue-green belly. 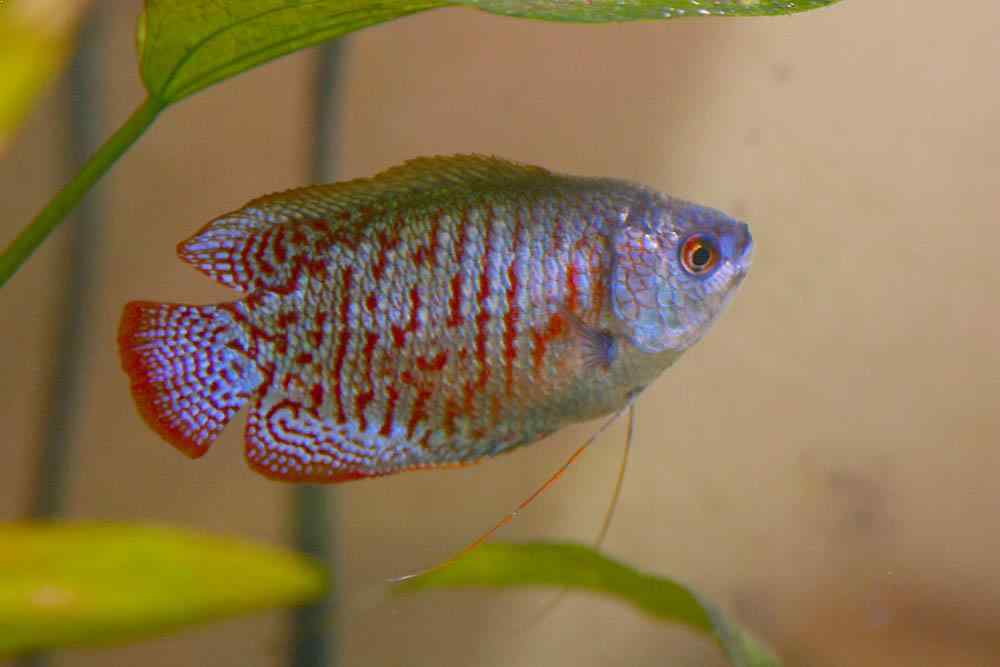 One of the most beautiful fishes in the world, Emperor Angelfish is a saltwater fish also known as the Imperator Angelfish and the Imperial Angelfish belongs to the Pomacanthidae family and mostly seen in the Indo Pacific Ocean. The fish was first identified in 1787 and scientific name given was Pomacanthus Imperator.

The beautiful fish has an average lifespan of 20 years in captivity and sometimes longer in the wild. The price of the beautiful fish is considerably high because of the popularity and readily available fish. The species grow in three different stages, juvenile, sub-adult and adult. They have a striking colour pattern when they are adults and juveniles. 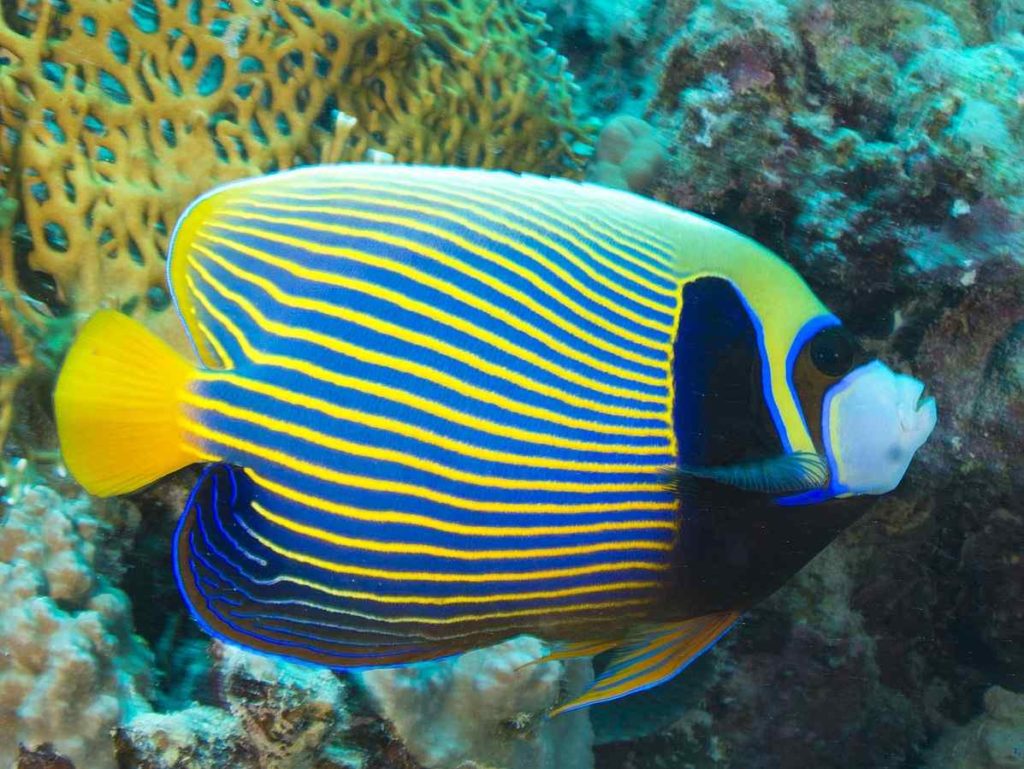 Also known as the Humuhumu Triggerfish or Humu Picasso Triggerfish can grow upto 10 inches. They are Carnivore and likes to eat meaty foods such as whole shrimp, krill, squid, clams, and small fish. Talking about the appearance, it has a tan body with gradient dark bands along with vibrant blue and black stripes on the top of the head. The yellow stripe can be seen from cheek to cheek. It requires a large gallon or approximately 75 gallons of water along with rocks and caves that will result in good habitat for him. 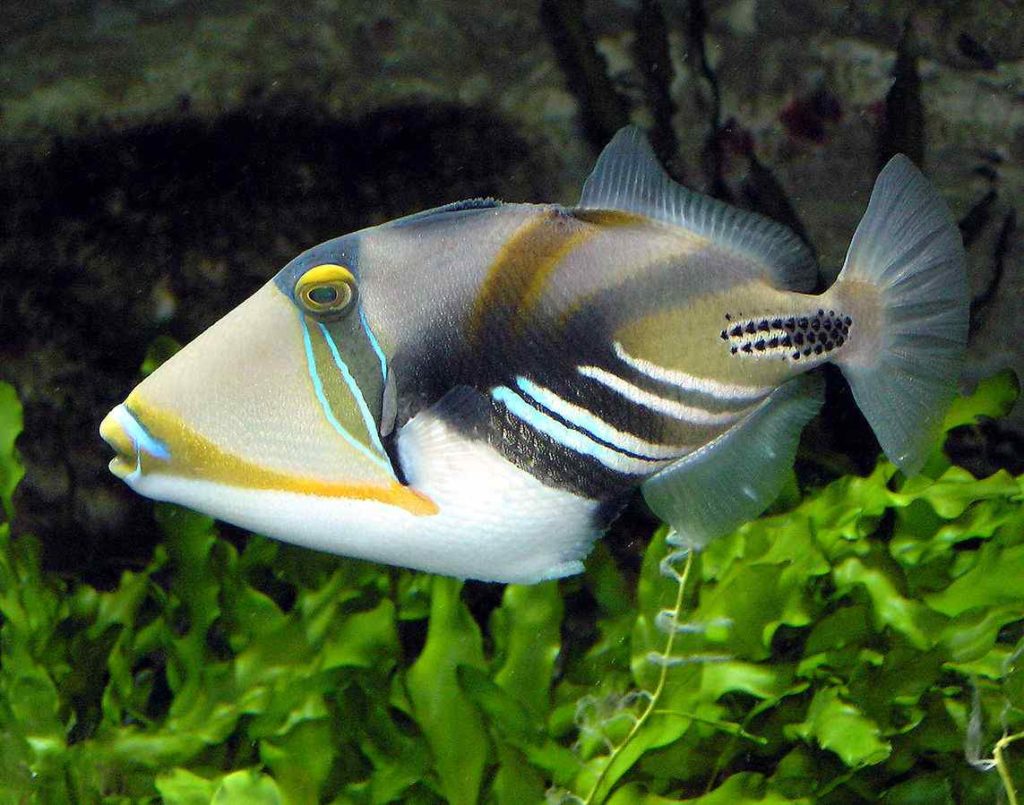 One of the most beautiful fishes also known as Purple Tang or Yellowtail Tang belongs to fish family Acanthuridae. It lives at a depth of 1 to 20 m, howvever, the fish grows to a maximum length of 20 cm. The species is native to the Indian and Pacific Oceans and have disc-shaped bodies and sail-like fins. 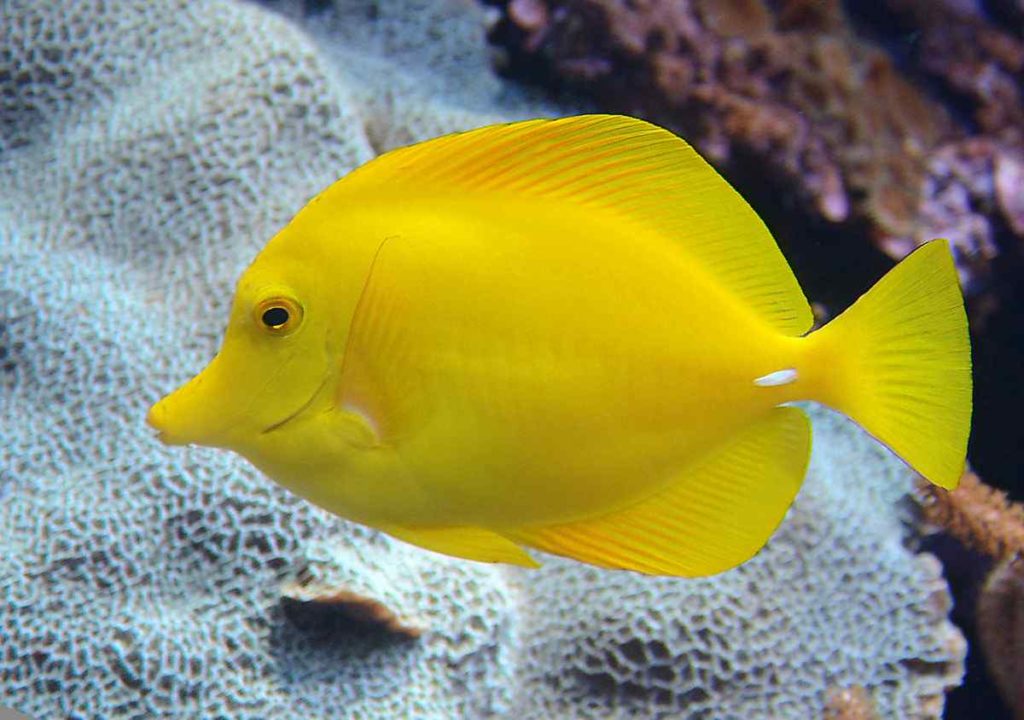 One of the five species of Liopropoma thrive in the tropical Atlantic Ocean, howvever, it also ranges from the Bahamas and the Florida Keys. Initially, fish was collected from the deep reefs of Curaçao on a 2011 research trip in the southern Caribbean. Talking about the appearance, it has a head, body, and caudal fin stripped with yellow-orange and lavender, however, all these stripes are separated by the red lines. 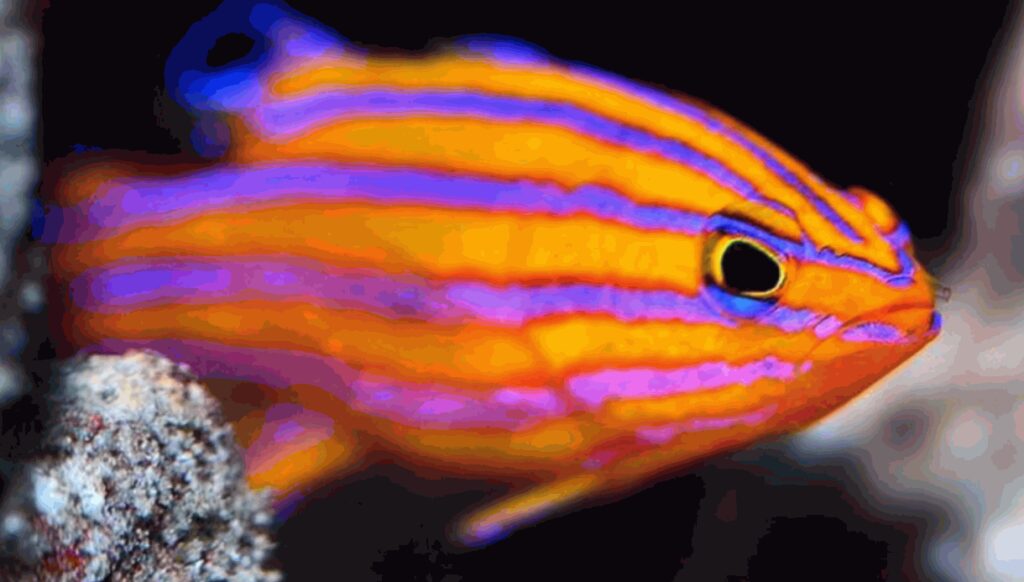 Also known as Chaetodon daedalma is a species of butterflyfish mostly seen in the western Pacific ocean near central and southern Japan. One of the most beautiful fish for can grow upto 6 inches, however, they require temperatures from 60–75 °F and also tank should be cooler. It likes meat diet like algae and other green foods. The best thing is that they can do well alone or even in small groups. The species are active swimmers and should not be put into anything under 180 gallons. According to the IUCN, the status of the species is of Least Concern (LC). 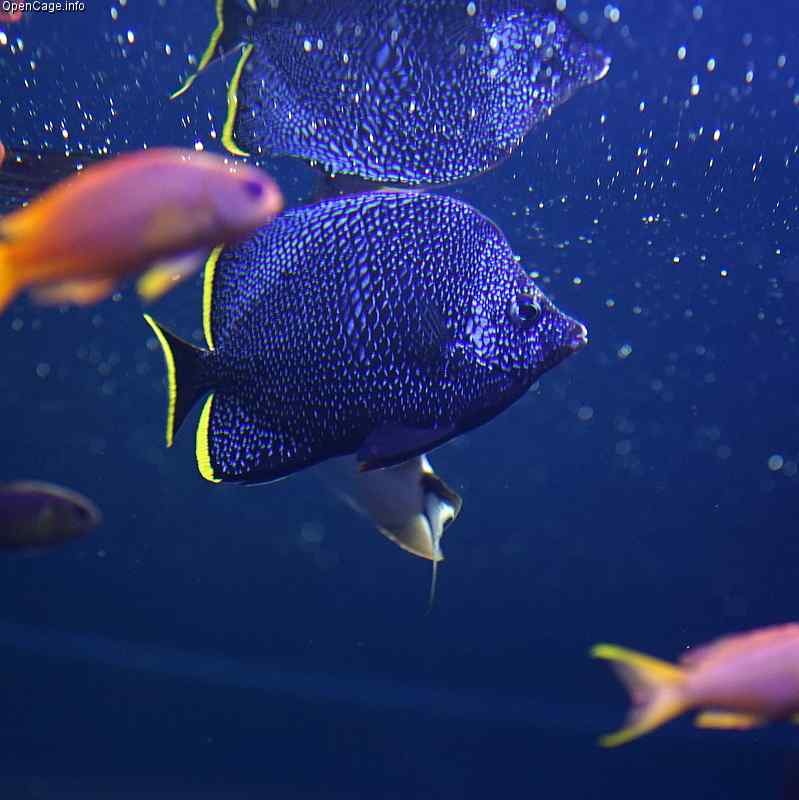 These are the beautiful fishes in the world. Do post your comments.