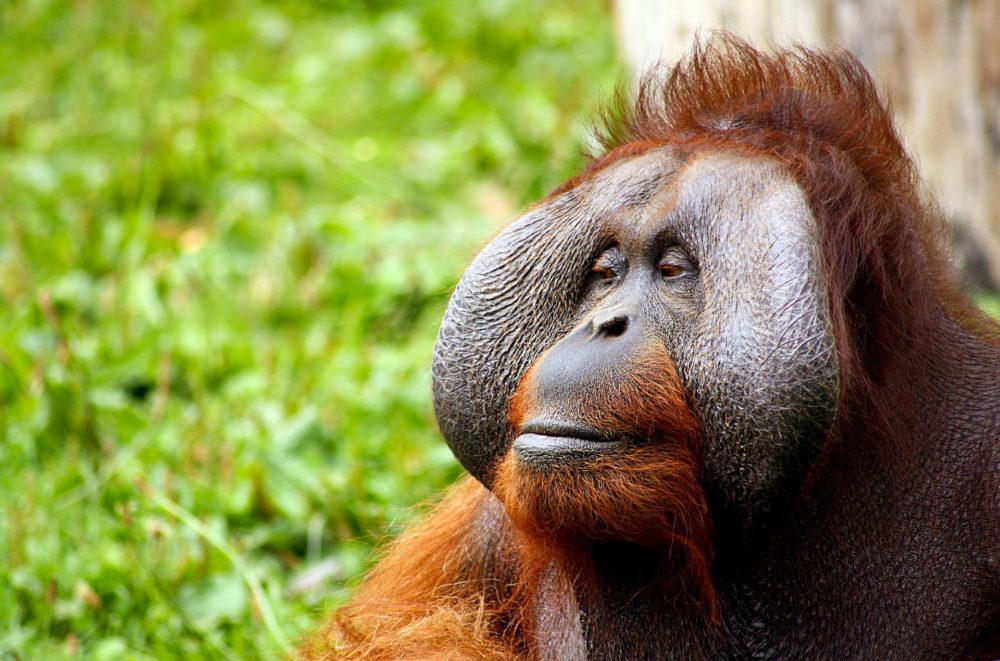 Indeed, orangutans are some of the smartest land animals on Earth. Now, researchers have found that these amazing apes can communicate about past events. It is the first time this trait has been observed in a non-human primate. Virginia Morell reports Science magazine, a new study led by researchers from the Scotland’s University of St. Andrews suggests that orangutans can also “talk” about the past like humans.
A new study published in the journal Science Advances revealed that when wild Sumatra orangutan mothers spotted a predator, they suppressed their alarm calls to others until the threat was gone. This behaviour is known as “displaced reference,” or “the capacity to transmit information about something that is not present or about a past or future event.”

The University of St. Andrews researchers designed this experiment in a hilarious way. Firstly, they draped themselves in white, spotted, patterned and tiger-stripe sheets and crawled on all fours underneath mother orangutans in Sumatra’s Ketambe forest for around two minutes before moving away from the orangutans’ sight. They observed that instead of making an instant cry, the primates stayed quiet for an average of seven minutes before they made their alarm calls. And when they were exposed to a predator, Sumatran orangutan mothers temporarily suppressed alarm calls up to 20 minutes until the model was out of sight, explained the researchers nonchalantly. The Wild Sumatra Orangutan mothers waited an average of seven minutes before alerting infants to a potential predator’s threat. The researchers found that it was possible that the orangutans were so paralyzed by fear that they only regained control of themselves after the threat had passed, but several factors make the researchers suspicious about the lapse in time was even a more calculated move.

However, the orangutans are three extant species of great apes native to Indonesia and Malaysia. They are currently only found in the rainforests of Borneo and Sumatra.

Adriano Reis e Lameira, one of the researchers, explained to Science Magazine that in order to not draw attention the females remained quiet and one female stopped what she was doing, then she grabbed her infant, and defecated a sign of distress, and started slowly climbing higher in the tree. Lameira said, “She was completely quiet for about Twenty minutes. And then she finally did it.” Once she started her warning call, it went on for more than an hour, he added.

According to Andrews, the team also observed some sort of correlations between lapses in alert time and the mother’s distance from a perceived predator, as well as the age of the infants involved.
Also, the orangutan has proved to be highly intelligent and demonstrates an ability to wait before responding to stimuli as a sign of its intellectual capacities. In conjunction with the primates’ long-term memory, intentional communication and fine control of the laryngeal muscles could provide clues about the evolution of ape language or some semblance of speech as used by humans.

Carel van Schaik, a primatologist at the University of Zurich in Switzerland, who was not involved with the study explained to Science Magazine, “Since orangutans are closely related to humans, this study could help in studying the evolution of ape language”.

The research was published in Science Advances.