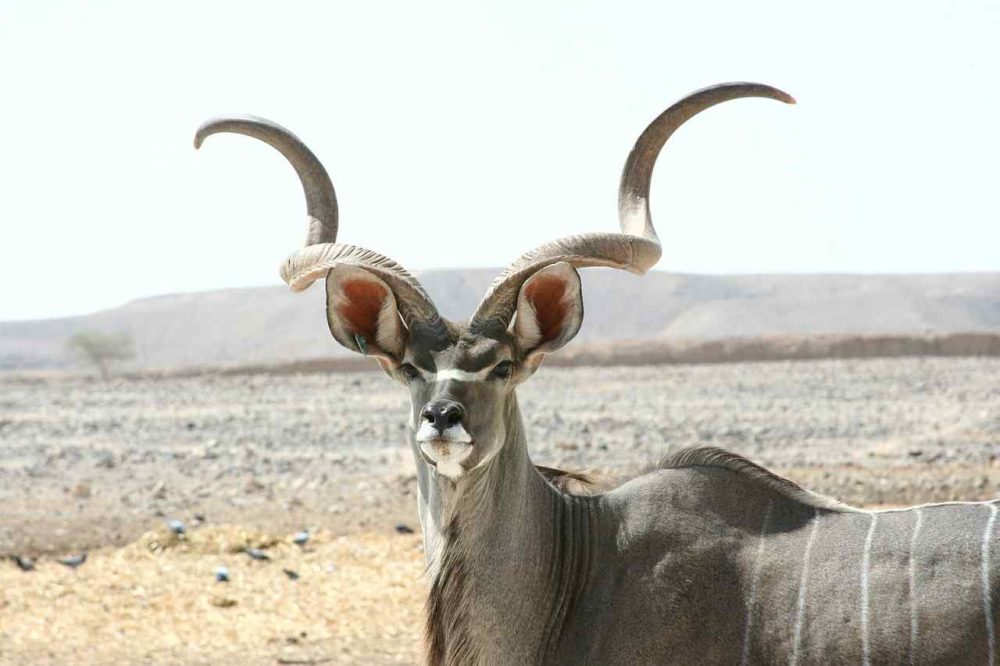 Popularly known as Lord Derby Eland, the giant eland antelopes are spiral-horned and are commonly found in the open-forests and savannah region of Africa. Belonging to the genus Taurotragus and members of the family Bovidae, the giant eland antelopes are the largest species of antelopes that exist currently on earth. They are herbivores who form small herds of 15 to 20 members and usually live on grasses, foliage, and branches. The giant eland is usually not territorial and has a considerably long stretch of home range. Although they mate throughout the year, yet their peak mating season is the wet season.

Also read:12 Most Amazing Horns In The Animal Kingdom

The world’s third largest species of antelopes, the kudu belong to the genus Tragelaphus. They can be specifically divided into two species, the lesser kudu and the greater kudu. The greater kudu can be found in various parts of the world while the lesser kudu is essentially confined to East Africa. Besides the size, the best way to differentiate between the two species is to take a look at the number of white stripes at the sides of their bodies. The greater kudu has barely 6 to 7 stripes while the letter kudu has around 14 stripes. The kudus have the highly recognizable long and spiral horns and are herbivorous.

Belonging to the genus Hippotragus and a member of the family Bovidae, the sables are also one of the largest species of antelopes that are found in Africa. They are sexually dimorphic antelopes with both the sexes having long, imposing horns and black and white markings on their head. The national animals of Zimbabwe, sable antelopes, are mostly found in the southern African savannah wooded grasslands. One of the most distinguishing features of the sable antelope is the presence of a well-developed mane on the neck and a short one on the throat.

Popularly known as the Lowland Nyala, the nyalas belong to the genus Nyala. However, they are also considered to belong to the genus Tragelaphus and are a member of the family Bovidae. They are also found to exhibit the highest sexual dimorphism among all the spiral-horned species of antelopes in the world. The nyalas are somewhat similar to the kudu antelopes. The male nyalas have a dark and shaggy coat and can be easily distinguished from the female nyalas that do not have any horns. The nyalas can be found in parts of Malawi, Mozambique, South Africa, Swaziland, Zambia, and Zimbabwe.

The roan antelope is a type of savannah antelope that are commonly found in the Eastern, Western, Central, and Southern parts of the African continent. They belong to the genus Hippotragus and are members of the family Bovidae. The roan antelopes are named after the colour of their coat which is of a roan or reddish brown colour. They have underbellies of a lighter colour, white eyebrows and cheeks and black faces, the colour of the coat is lighter in females. Considered the fourth largest species of antelopes, the roans have ringed horns which can measure up to a meter in length in case of the males and arch slightly backwards. They are herbivores and usually eat mid-length grasses.

Popularly known as Gemsbuck or the South African Oryx, the gemsbok belongs to the genus Oryx and is a member of the family Bovidae. They are native to the desert regions of South Africa, mostly the Kalahari Desert and are depicted on the coat of arms of the country Namibia. These beautiful antelopes are the largest of the Oryx species of antelopes in the world and are largely poached by humans for their magnificent horns.

The sole member of the genus Aepyceros and belonging to the family Bovidae, the impalas are medium-sized antelopes found in the Southern and Eastern parts of the African Continent. Impalas have a very strong sense of sound hearing and are known for making loud noises with their nose which are considered even capable of frightening elephants. They are also known for their agility and leaps. The Impalas have a glossy coat with a two-tone colouration and a contrasting white underbelly. They also have scent glands covered by a black tuft of hair on the hind legs which they use to attract mates.

Most commonly found in sub-Saharan Africa, close to the water lands in Savannah, the waterbucks belong to the genus Kobus and are members of the family Bovidae. Waterbucks are widely categorized into two types; the Common or Ellisprymnus waterbuck and the Defassa waterbuck. The Common or Ellisprymnus Waterbuck has a unique white ring on its back while the Defassa Waterbuck that has a white rump patch on its back. Since they cannot tolerate dehydration in hot weather, they prefer to inhabit in areas close to water bodies.

Commonly known as the Jumping Buck as they ‘Spring’ in the air, the Springboks are the only species of the genus Antidorcas and are members of the family Bovidae. They are medium-sized antelopes most commonly found in the Southern and South-western parts of the African continent. The Springboks are the only species of antelopes that are found beneath the Zambezi River. They have an acute eye-sight and are extremely gregarious, featuring the symbol of South Africa’s rugby team, ‘The Bokke.’

The sole species of the genus Litocranius and members of the family Bovidae, gerenuks, are also known as Giraffe Gazzele for their long giraffe-like necks. Commonly found in the Horn of Africa and the dry bush and scrub areas of East Africa, gerenuks are a slender hybrid between an impala and a giraffe. They are diurnal animals or animals who are active mainly during the day, where most of their day goes by in browsing and foraging for food. Gerenuks don’t usually fight or travel too much, mostly to save their energy for foraging.

These are the species of antelopes found in Africa. Do post your comments.