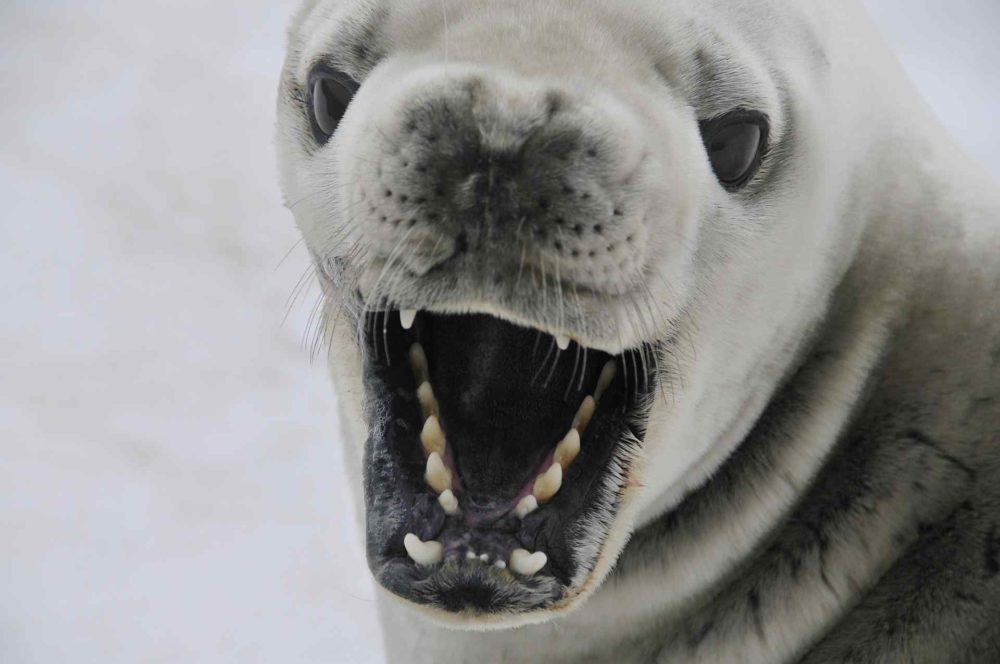 Antarctica is the most isolated continent on Earth and the only one to have almost no human habitation. This is because of the extremely harsh weather conditions, almost no food and no cultivable land. However, despite these adverse conditions, there are many Antarctic animals that not only survive but thrive in this difficult environment. Here is our list of the 10 most beautiful Antarctic animals.

The famous emperor penguin is the largest species of penguins in the world and is endemic to Antarctica. They live in all coastal regions of this continent and are part of large colonies that show cooperative behaviour like huddling together to escape the cold winds. The female lays one egg each year and the male takes care of it till it hatches. During this time, the male survives with almost no food and the female goes out into the ocean in search of food, returning after over 2 months with plenty of food for the family.

Emperor Penguin can reach upto 39 to 47 inches in height and weighs approximately 49 to 99 pounds. Talking about the appearance, it has a black head and back, however, the belly is white with pale yellow breasts and yellow ear patches. The feathers are a waterproof and thick layer of blubber that make sure the species survival on a temperature of minus 60 degrees of Celsius. The average lifespan of Emperor penguin is approximately 15 to 20 years in the wild. Penguins have the ability to dive very deep in searches of food like small fishes, crustaceans, and krill. It is also one of the world’s amazing animals.

This fascinating Antarctic animal is also one of the mysterious animals of the world that have not yet been thoroughly studied. It is the largest species of squid in the world and is found only in very deep waters. There are legends that depict this animal as a bloodthirsty animal and fights between squids and sperm whales have been known for long. Today, there is some evidence to support it since the remains of the colossal squid have been found in the digestive tracts of sperm whales. You must also know about beautiful pink animals in the world.

It is mostly seen in cold waters and mostly seen in Antarctica and New Zealand, however, sometimes it is also seen in areas of Africa. It is tough for science to examine natural behavior at more than 1,000 feet below the surface. Because of the enormous size, it is believed that they eat a big volume of large fish out there in the ocean. The species is very powerful, so they don’t face any problem in consuming these large fishes. Colossal Squid is one of the species where males have a penis for reproduction. Even the courtship of this species of squid isn’t known. 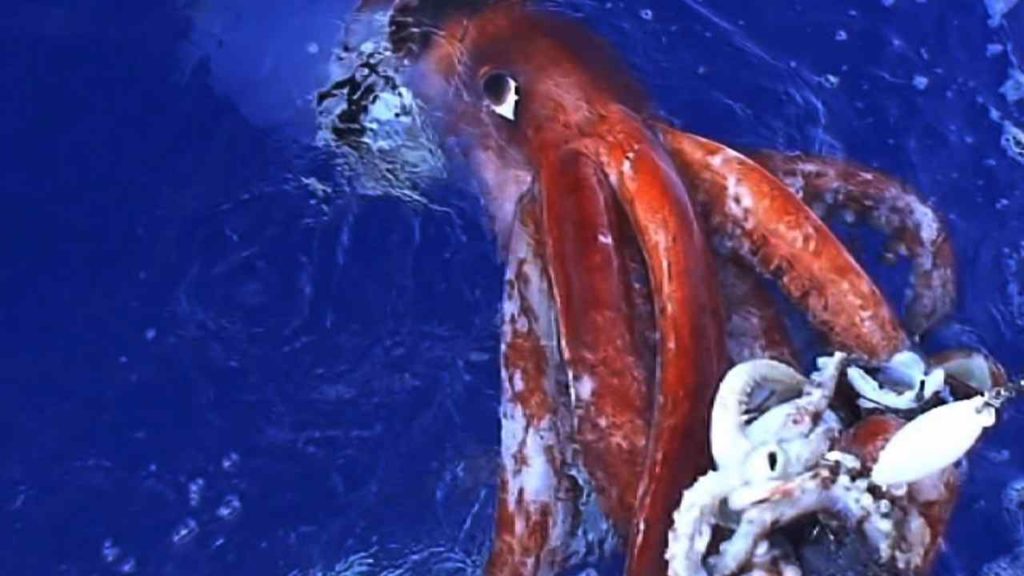 This Antarctic animal is named after the distinctive black line on its chin that looks like the strap of a hat. This is the second most numerous species of penguins and has a population of over 11 million individuals. They live near the coastal regions and spend a lot of time in the water hunting for food. During the winter, they move to larger icebergs and build nests on rocks and dry land. Both males and females are involved in caring for the young. These penguins are also called bearded penguins or ringed penguins.

Chinstrap Penguin can reach up to 28 to 30 inches in height and weighs approximately 6.5 to 10 pounds, however, males are taller and heavier than females. Talking about the appearance, it has dense and waterproof plumage with bluish-black plumage on the head and back and white plumage on the face and ventral side of the body. Additionally known as “stone cracker penguin” because they communicate with the help of harsh calls. They have red eyes with a short and black bill. It has webbed feet that are pink in color. 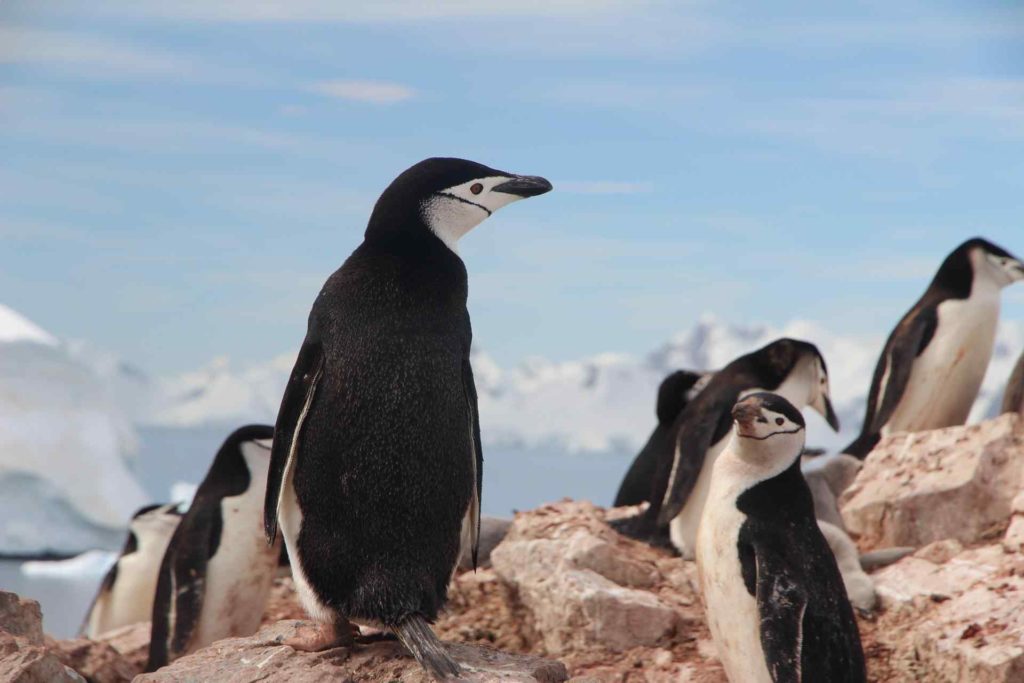 Crabeater seals are some of the most numerous animals found in the Antarctic with a population of over 15 million individuals. They are also the world’s most abundant mammals after humans. They live on packed ice found in the Antarctic oceans, breed and feed there and do not migrate. The female cares for a pup for a long time and feeds it till it can dive for itself. While searching for food, these seals can dive up to a depth of 250 metres.

Crabeater Seals are the highest among all the seals in the world. Once the pup is born, a male crabeater seal will join and defend the female crabeater seal in the chance of waiting for his chance to breed. The Crabeater Seals are found in huge numbers, however, mostly they can be seen alone or in small groups. They usually feed at night and spend approximately 8-10 hours feeding and make over 100 dives. 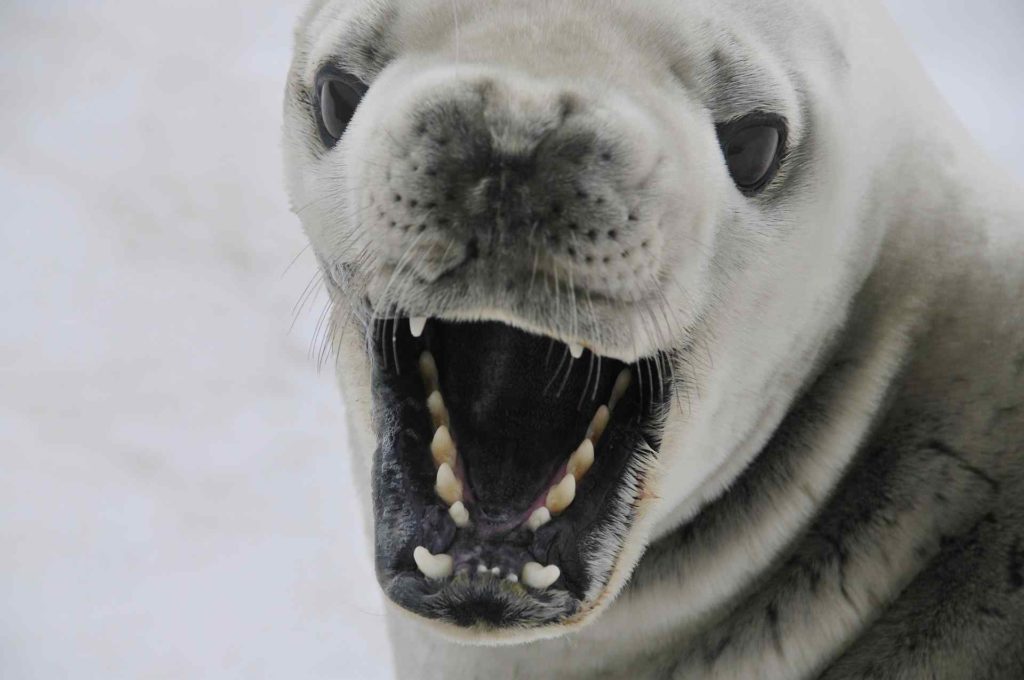 This Antarctic animal is the largest seal species found on the continent and is named after the snout-like appearance of its nose that looks similar to the trunk of the elephant. They can grow up to 6 feet in length and can weigh more than 2 tonnes. They are social animals and live in colonies that feed and breed together. Males fight with each other to get the perfect mate and use their large bodies to overpower competitors. Their bodies are very adept at storing energy and they can go for up to two months without any food.

Elephant Seals are highly social animals and mostly seen in large groups during the breeding season. The largest carnivores in the world love to eat squid and fish as a main source of food in the diet and can be seen living in 2000m deep and can hold breath for up to two hours. The species is one of the examples of living examples of sexual dimorphism means a physical difference between the male and female of a species where males can be upto ten times the weight of reproductive females and only 2 – 3 % of male Elephant seals actually breed. 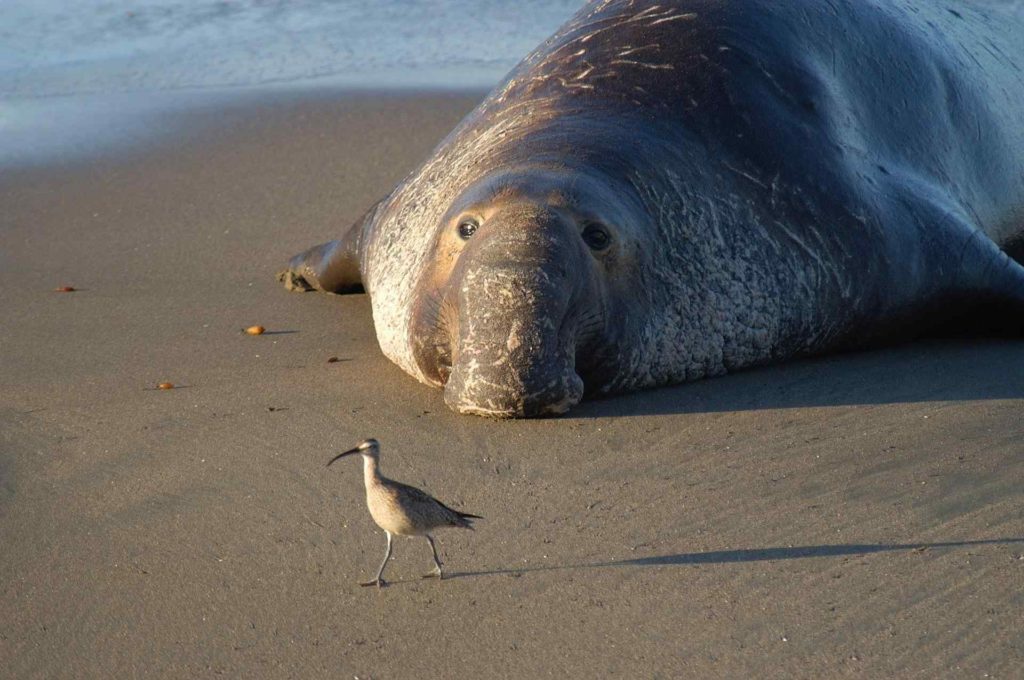 The dusky dolphin is the smallest member of the dolphin family and is only 2 metres in length. It lives in the cooler waters of Southern oceans and is most commonly found in the Antarctic. It has a smooth body that makes the body streamlines and allows the dolphin to swim great distances with relatively little effort. It migrates during the night in search of food and lives and hunts in groups. the group size may vary between 20 and 25 individuals and the group behaviour has a large effect on individual members. 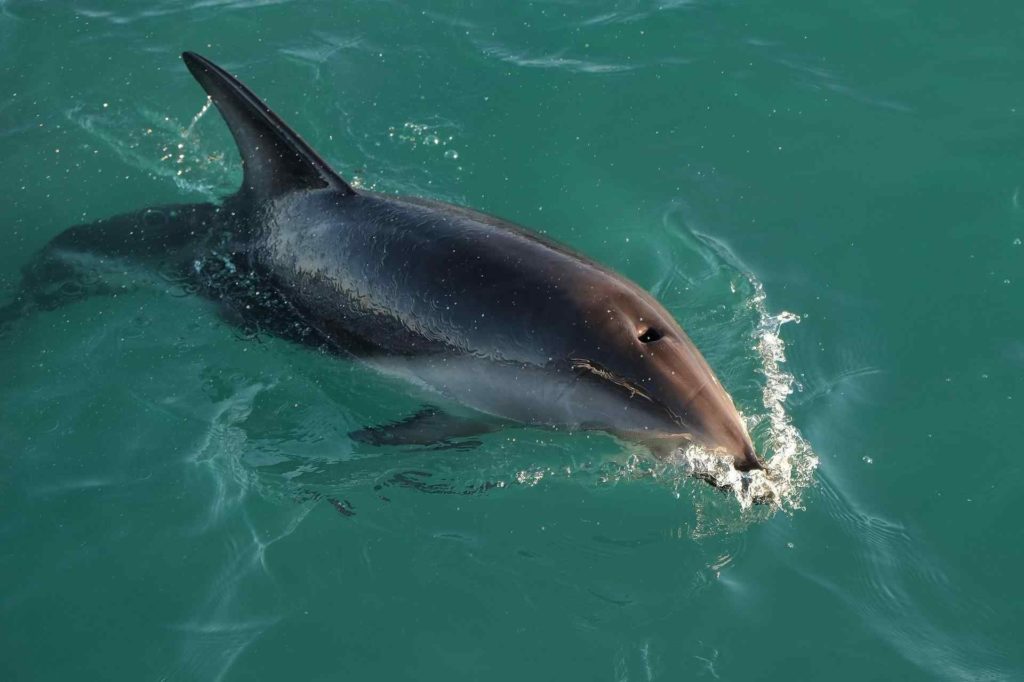 Despite what the name may suggest, this Antarctic animal is not a whale but the largest dolphin in the world. It is found in cold oceans in the north and south and migrates each year searching for food. Killer whales are very social animals and the group they live in influences their behaviour, hunting habits and food patterns. They usually hunt seals, fished and penguins and currently have a population of about 50 thousand but are threatened due to climate change. 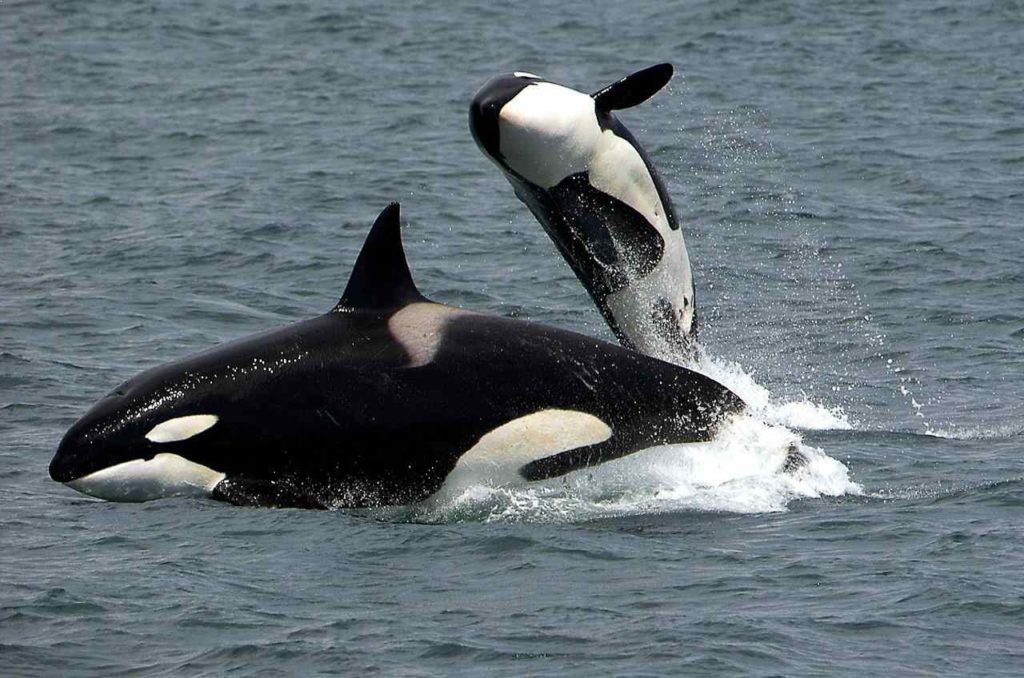 This bird is one of the fascinating Antarctic animals because it has the largest wingspan and hence it is listed as one of the largest birds in the world. It lives on the islands of Antarctica and has a wingspan of 2.5 to 3.5 metres. These birds spend most of their lives in flight and rarely return to the ground. Using their large wings, they can glide on wind currents for hours together searching for food. They lay only one egg a year and care for it very meticulously. Another interesting fact is that they can survive on ocean water.

These are broad-winged birds that are found on the Antarctic coast and live near the open sea. They migrate to the North Pacific Ocean in the winter but use the same nest throughout their lives. Additionally, they are also monogamous and stay with the same mate. They are known to choose breeding grounds close to penguin colonies because this makes it easier to find food and they are also protected from predators. Skuas are brownish – grey birds and have large wings and very powerful flight. 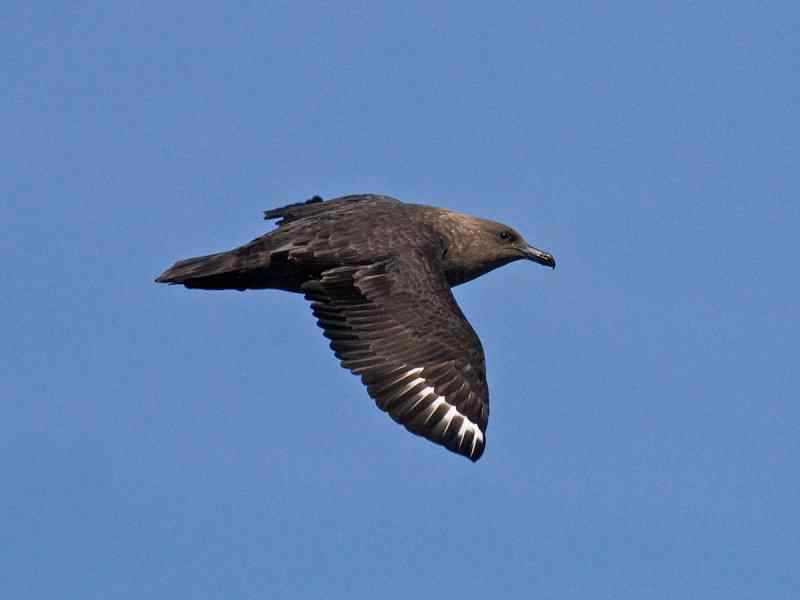 Until very recently, this whale was considered a subspecies of the common minke whale but it has slight differences in size and colouration and so has been classified as a separate species. It is found in the areas of the Antarctic where pack ice is present in groups of two to four individuals. Some of these groups are migratory and have different feeding grounds in the summer and winter while some groups choose to remain the in the Antarctic throughout the year. 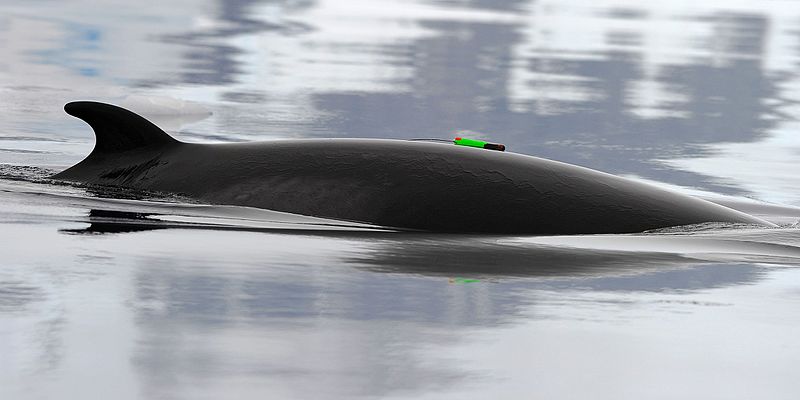 These Antarctic animals are indeed very beautiful and some of them are also very numerous but they are now threatened by the phenomenon of climate change. The rising global temperatures are melting the packed ice in this region, which is where most of these animals live. This loss of habitat coupled with illegal hunting and trade in animal products is the main cause of the declining numbers of Antarctic Animals. These are the 10 most beautiful Antarctic Animals in the world. Do post your comments.