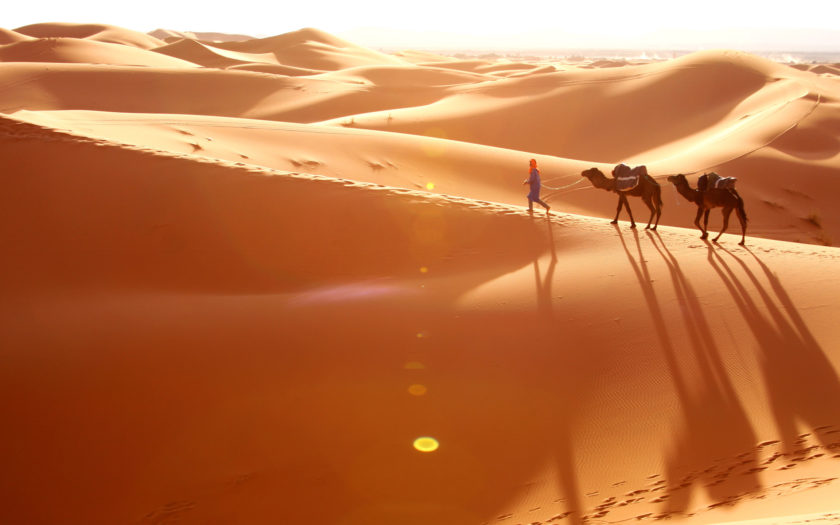 Have you ever wondered where the desert scenes from the movie Dune were filmed? Maybe, you are a fan of the Uncharted series and want to learn more about the desert that Nate had to cross in the third part of the game? Empty Quarter, better known as the Rub’ al Khali, is a mesmerizing place that attracts and inspires visitors from all over the globe.

The Rub’ al Khali stretches over the Arabian Peninsula covering 650,000 km² of its land. The desert occupies territories of the UAE, Oman, Yemen, and more than one-fourth of Saudi Arabia. Tourists who want to visit the Empty Quart often look for MetropolitanRealEstate because the best safari tours to the desert start from there.

The average temperature of the Rub’ al Khali is 36 °C, and it can exceed 50 °C during summer. Despite its harsh weather, vast dunes, and salt flats, the desert is home to various animal species. Below, you can find more information about unique creatures that were able to adapt to these unsustainable conditions and inhabit the desert. 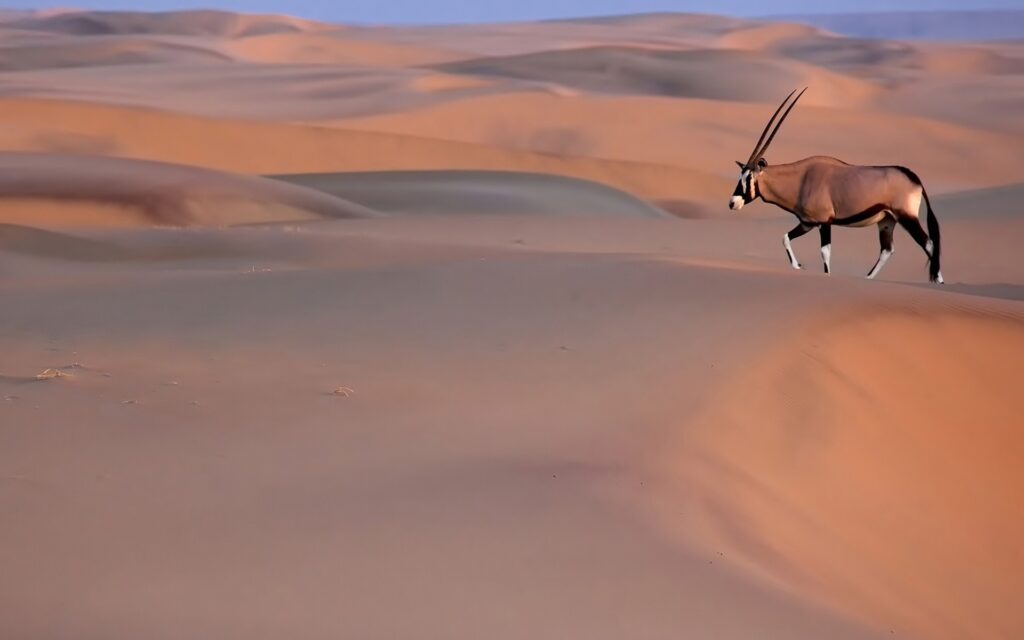 Animals of the Rub’ al Khali are resilient and specialize in surviving its extreme temperatures. One of those animals is the Arabian oryx. It is a medium-sized white antelope with two long, straight horns.

In 2011, the Arabian oryx was listed as threatened species by the IUCN Red List. However, it was able to revert to vulnerable status becoming the first animal to do so. Their estimated population in the wild is about 1,200 individuals. Oryxes usually form small groups of less than a dozen — any more would put too much pressure on the scant vegetation.

Most of the Arabian oryx’s body is covered with white fur to reflect the heat. They’re also black-skinned underneath. At night, the temperature of the desert drops to 20°C. Arabian oryxes are built to withstand heat, and to them, it feels cold. When the sun rises, oryxes turn to warm each side in the sun.

Arabian oryxes can make a non-stop journey of 120 km across the desert to get to fresh grazing. They can survive long periods without water and have a lifespan of over 20 years. 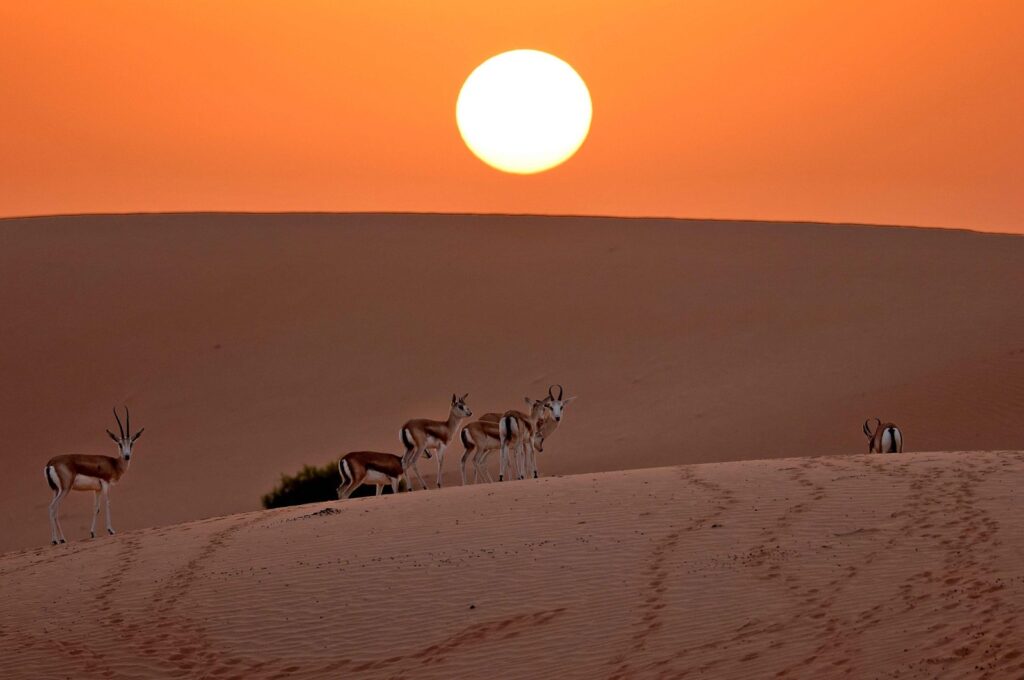 Gazelle is another hoofed animal that you can bump into in the Empty Quart. Two kinds of gazelles can be seen there — the Arabian sand gazelle and the mountain gazelle.

The Arabian sand gazelle or reem is a bit larger than the mountain gazelle. Male individuals are usually larger than females and can weigh about 30 kg. Sand gazelles have dark horns 20-30 cm long.

Reems has mostly light sandy fur with white bottoms. This look works as camouflage and helps them stay cool in the high temperatures of the Rub’ al Khali. There are about 3,000 of them in the wild. They form groups of 4 to 20 individuals.

Mountain gazelles weigh between 17 and 29.5 kg. Just like sand gazelles, they have a white bottom. However, they are covered in slightly darker fur. The feature that distinguishes the mountain gazelle from other gazelles is its small, 8-15 cm horns.

Mountain gazelles prefer to live in mountains near the desert. They can reach a speed of 80 km/h and have a population of less than 3,000 in the wild. 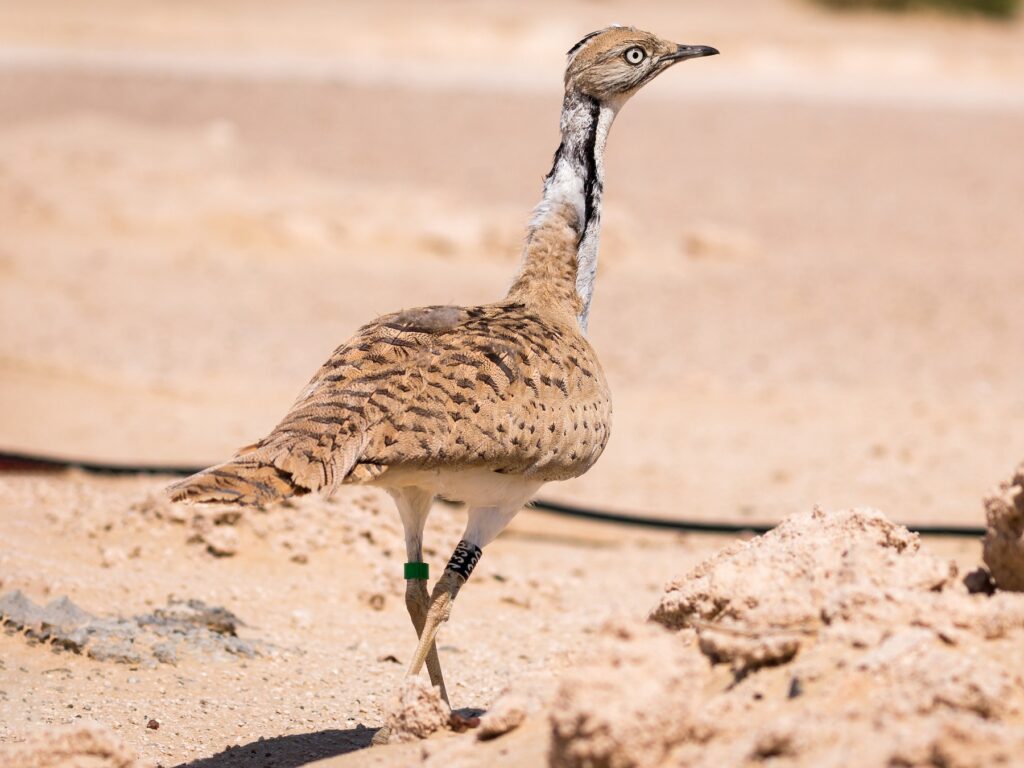 Although Chlamydotis is considered critically endangered by the IUCN, its population amounts to at least 79,000 individuals.

MacQueen’s bustards have white and brown feathers. Their brown part is covered with black dots. The birds also have long black stripes on the sides of their necks. An average male weighs about 2.1 kg. 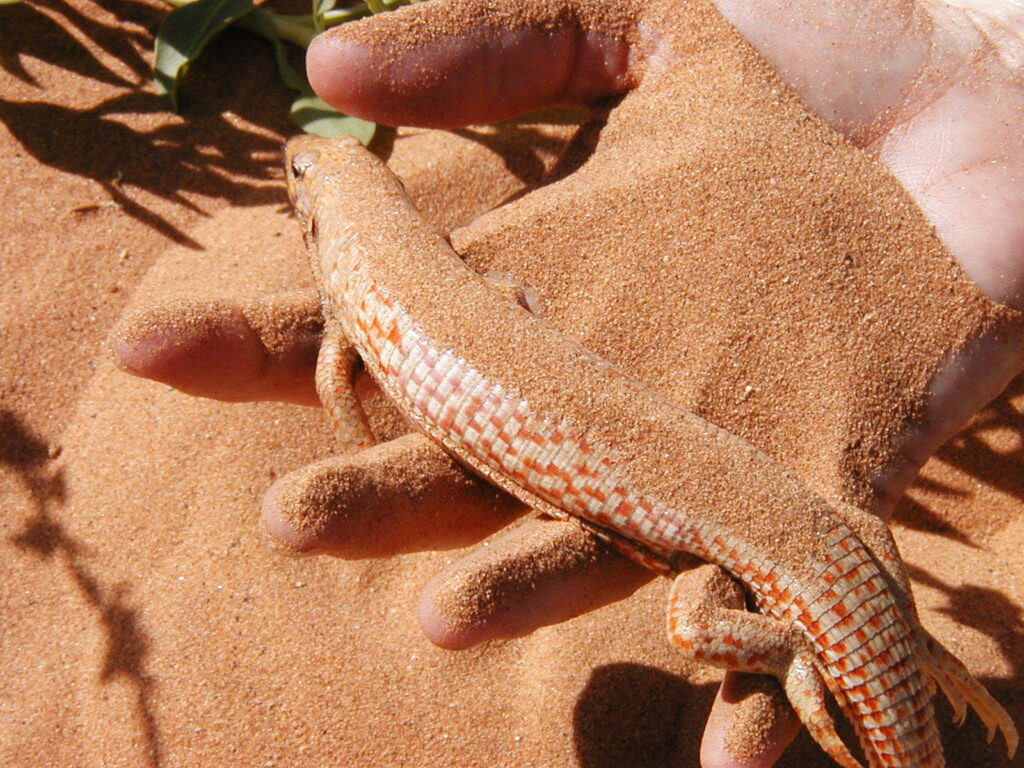 You will be lucky to see geckos and lizards in the seemingly lifeless sands of the Empty Quart. Gulf short-fingered gecko and Uromastyx aegyptia are the most common reptiles in the region.

With an average body mass of 5 g, the Gulf Sand gecko is the only lizard that inhibits salt flats of the desert. Its body length is shorter than 15 cm. A gecko has primarily brow skin making it extremely difficult to spot with a naked eye.

The Gulf Sand gecko is found on soil near rocks and sparse vegetation. It feeds on insects and lays eggs. The gecko has a lifespan of 7 years.

Uromastyx aegyptia, better known as the Egyptian spiny-tailed lizard, is one of the largest reptiles found in the Rub’ al Khali desert. It can be seen almost in every corner of the Arabian Peninsula and even in the North-East of Egypt.

The length of the male body is 76 cm on average. Some adults can reach a weight of 115 kg. It has gray, sandy skin.

The Egyptian spiny-tailed lizard prefers elevated rocky areas. The lizard can also be seen in sandy, open areas. Despite its size and predator look, the Egyptian lizard mostly eats plants. It lays 7 to 23 eggs and has a lifespan of 15 years in the wild.

These and many more fascinating animals can be found in the Rub’ al Khali desert. If you’re a fan of discovering the fauna of various regions, make sure to visit this Arabian wonder.