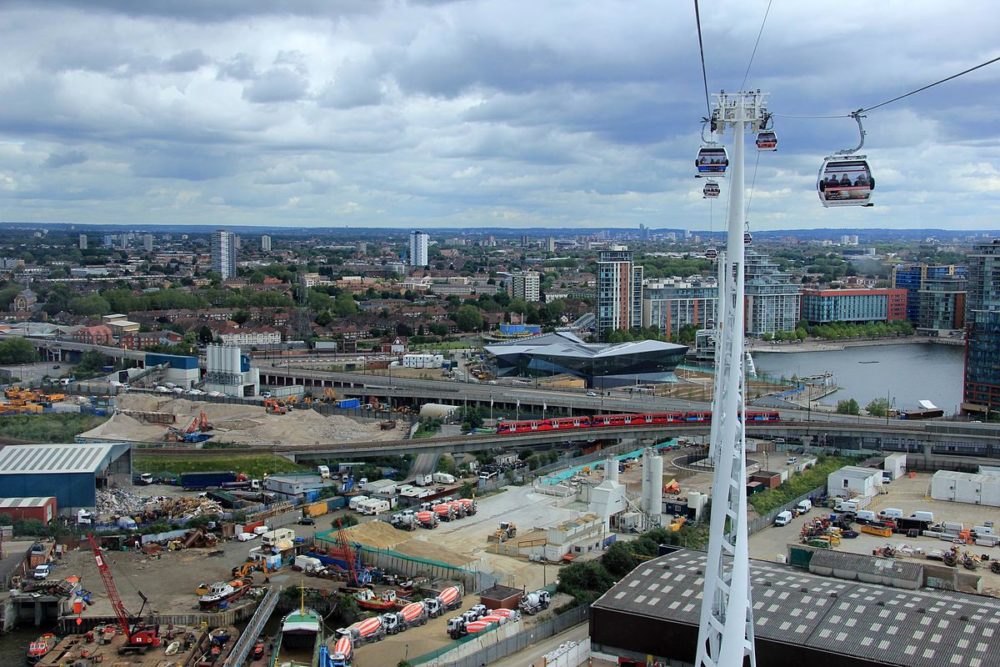 Are you an acrophile (one who loves heights)? Then I’m definitely sure that you’re going to enjoy this article. Aerial lift journeys are always amazing as the lifts at altitudes give us the spectacular views of the mountains, valleys, or rivers across which we pass. Skim off through the article to know about the top 10 aerial lifts of the world.

One of the stunning aerial lifts in the world, the Palm Springs Aerial Tramway is located in Palm Springs in California. It is the largest rotating aerial lift in the world. It was opened in 1963. It is a twelve and a half minute ride from the Valley Station at 806m to the Mountain Station at a height of 2,596m. The tram car is having a diameter of 5.5m and it rotates two times during its single journey(ascend and descend) so that passengers can have amazing views in all the directions without moving from their places. It has a maximum capacity of carrying 80 passengers. The rotating cars were added in 2000. 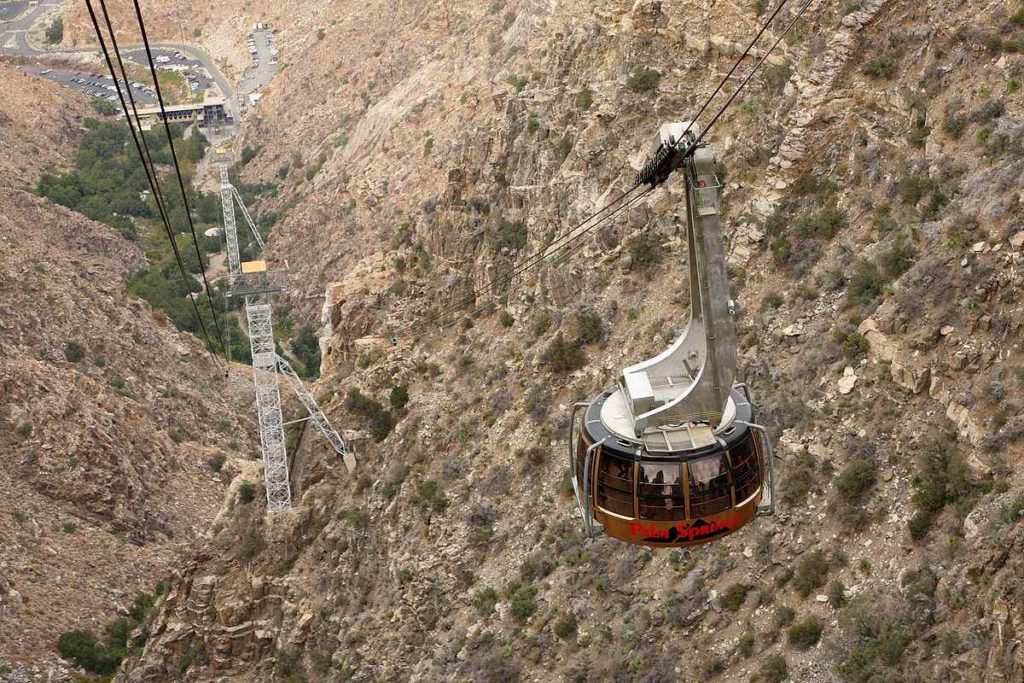 The Merida Cable Car is a cable car system in Venezuela. It is the highest and the second longest cable system in the world. It is located in a city of Venezuela – Merida which is at a height of 1,640m. It was opened to the public in 1960. A project for its modernization was commenced in 2011 and its new modern aerial lift was inaugurated in 2016. It is one of its kind as it covers a span of 12.5 kilometres and reaching an altitude of 4,765m. It travels back and forth between the Merida city and the Espejo Peak. There are total 4 cable cars that are connected serially and each of the cars is able to carry 36 passengers in it. It is one of the most amazing aerial lifts in the world. 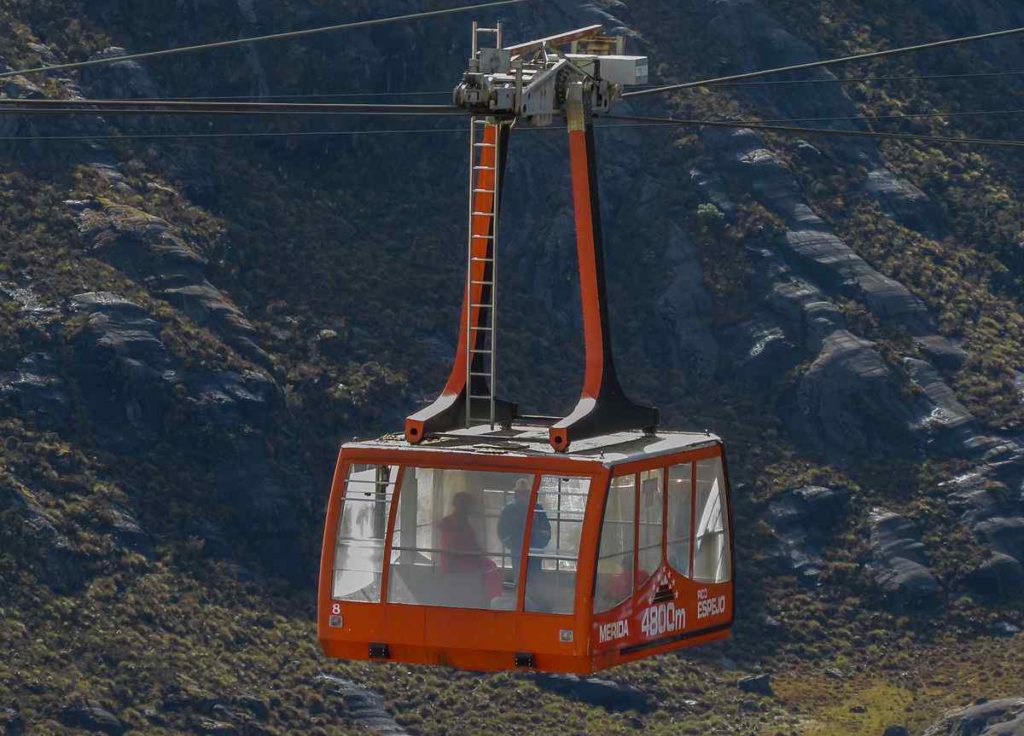 The Masada Aerial Lift is located at an ancient fortress of Israel- Masada. A cableway was built in 1971 by Karl Brandle company of Switzerland to carry people from down to the ruins of the top plateau. It had one cable car which travels 900m at an elevation change of 290metres. It was replaced in 1998 by an aerial tramway without any support pillar. Its bottom station is 257m below and its summit station is 33m above the sea level. It is owned by the Israel Nature and Parks Authority. The journey is 0.9 kilometres long. It’s operating speed is 28.8km/h. 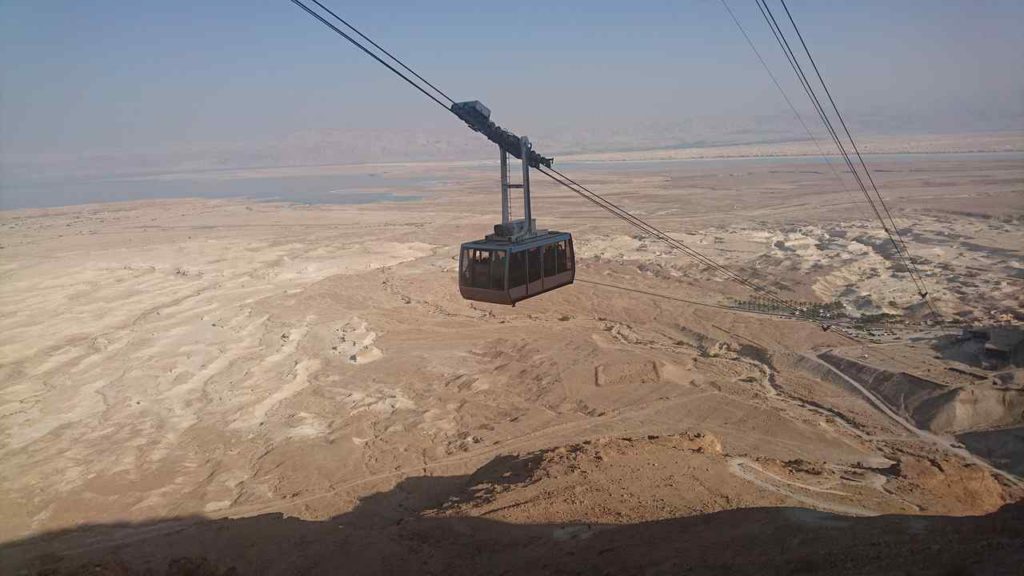 The Emirates Air Line Aerial Lift is located across River Thames in London, England. It was built by Doppelmayr with the sponsorship from the Emirates Airlines. It got opened on 28 July 2012. It is operated by Transport of London. It crosses the river Thames from Greenwich Peninsula to the Royal Victoria Dock. The line length is 1,100 metres having the highest elevation of 90 metres. Its operating speed is 6m/s. It operates every day from 7:00 to 23:00 on weekdays, 8:00 to 23:00 on Saturday and 9:00 to 23:00 on Sunday. As of April 2017, the fares were £4.50 for a single journey. It is one of the amazing aerial lifts in the world. 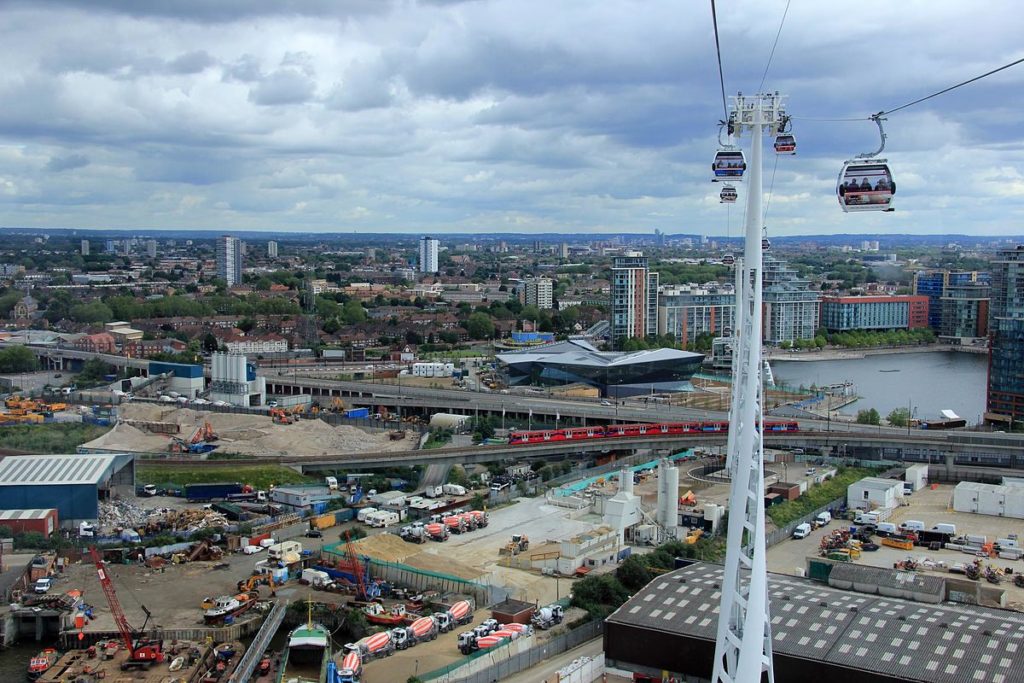 The Roosevelt island aerial lift is located in the most populous city of US – New York(NYC). This tramway is the first commuter aerial tramway in North America. Having opened in 1976, the lift has served to around 26 million passengers. The tramway runs across the East River connecting Roosevelt Island to the Upper Side of the Manhattan. It is one of the few forms of mass transit system which is not run by the Metropolitan Transportation Authority, though the Metro Cards are accepted and transfers are also available. It is operated by Roosevelt Island Operating Corporation. The length of the line is 940 metres. Its operating speed is 28.8km/h. It has the highest elevation of 78 metres. 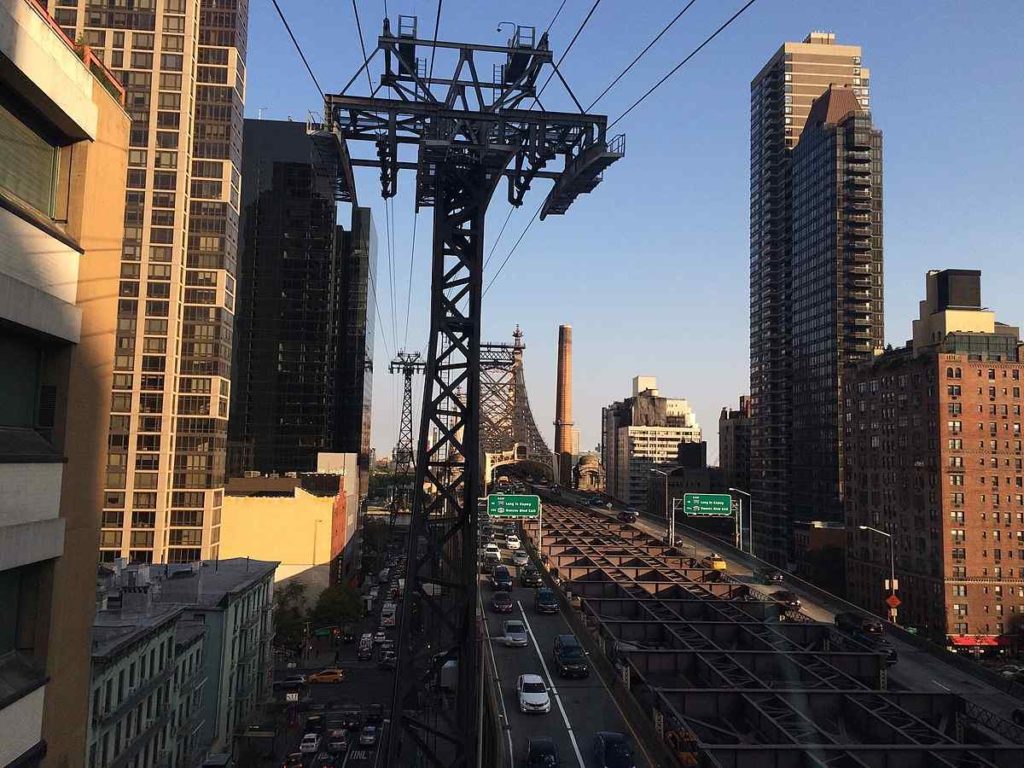 The Sugar Loaf Aerial Lift is located in the very well known city of Brazil- Rio de Janeiro (or simply Rio). It was opened on 27 October 1912. It was only the third cableway in the world. In 1972, the cars were modernised and the passenger carrying capacity was increased from 22 to 75. It is visited by almost 2,500 visitors a day. Its operating hours are from 8:00 to 22:00. The lift moves between Praia and Vermelha and the Sugarloaf Mountain. It stops at Morro da Urca ( at 220m) on its way up and down and reaches the summit of the mountain at an altitude of 396 metres. The first part of the line from Praia to the stop station Morro da Urca is having a length of 600 metres. The second part of the line from Morro da Urca to the Sugarloaf Mountain is a journey of 850 metres. The latter part of the trip is much steeper than the former one.

The Table Mountain Aerial Lift is an aerial lift in the legislative capital of South Africa- Cape Town. The cableway is used to carry passengers to the top of Table Mountain. It is one of Cape Town’s most popular attractions which is visited by around 900,000 visitors. There is a total of two cars each having a capacity of carrying 65 passengers. The maximum speed of the lift is 10m/s. It began its service on 4 October 1929. The vertical distance of the journey is 765 metres. The cableway is operated by the Table Mountain Aerial Cableway Company. The floors of the cars rotate during ascending and descend, thus giving passengers a panoramic view of the surroundings. 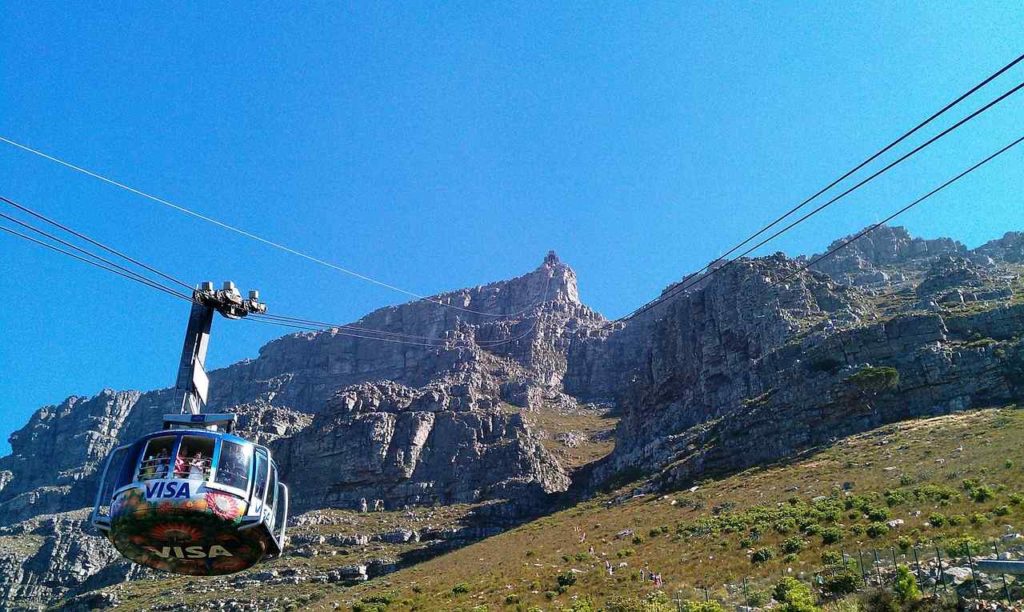 The Klein Matterhorn Aerial Lift is situated in Zermatt, Valais, Switzerland. It is the highest place in Europe that can be reached by an aerial lift. It is having an altitude of 3,883 metres above sea-level. The construction of this cable car was not easy because due to the high altitudes the worker’s productivity was decreased by 50%. The construction of this cableway started in 1976. The cable car offers a breathtaking view of the Theodul glacier below while it is also possible to have a view of the Ice cave from outside the tram station. 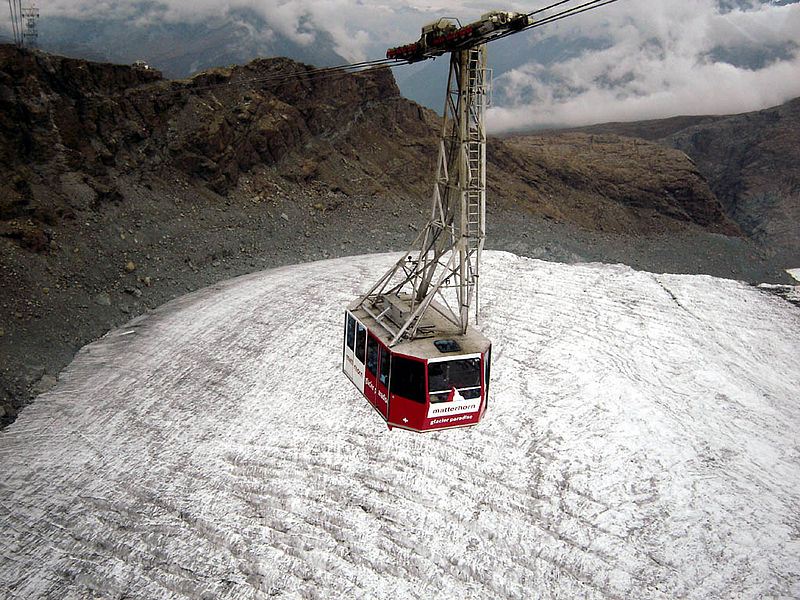 The Grouse Mountain Skyride is located in the District Municipality of North Vancouver, British Columbia, Canada. It journey’s from the Lower Terminal to the Peak Chalet – on the rooftop of the Grouse Mountain. The Skyride operated every day from 8:45 to 22:00 departing every 15 minutes. There are two skyrides: one is the Blue Skyride which is used for freight transportation and a Swiss-built Garaventa Red Skyride used for public transportation. The Skyride has a maximum capacity of carrying 101 passengers (96 passengers in summer). 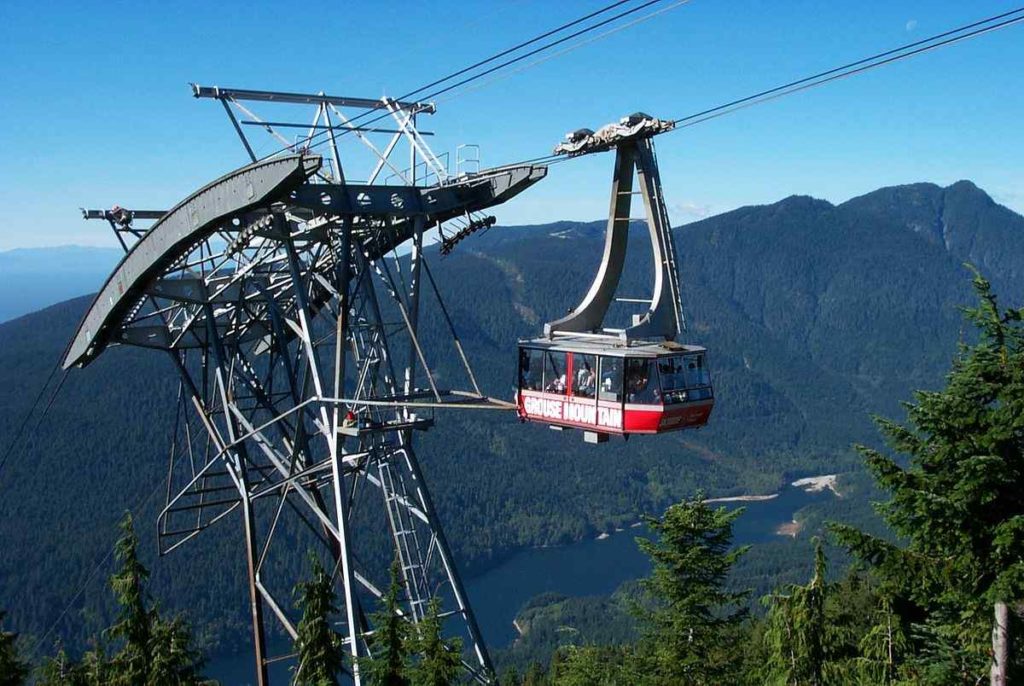 Shinhotaka Ropeway is an aerial lift system in Takayama, Japan. It is operated by Okuhi Sightseeing Development. It was opened in 1970. The cableway rides to the third tallest mountain of Japan – Hida Mountains’ Mount Hotaka. The Shinhotaka Ropeway consists of two cable lines – Ropeway No. 1 and Ropeway No. 2. Both the systems have two cable cars. The cable cars of Ropeway No.1 have passenger carrying capacity of 45 while that of Ropeway No.2’s cable car is 121. The former cable length is 573 metres and the latter’s cable length is 2.6 kilometres. 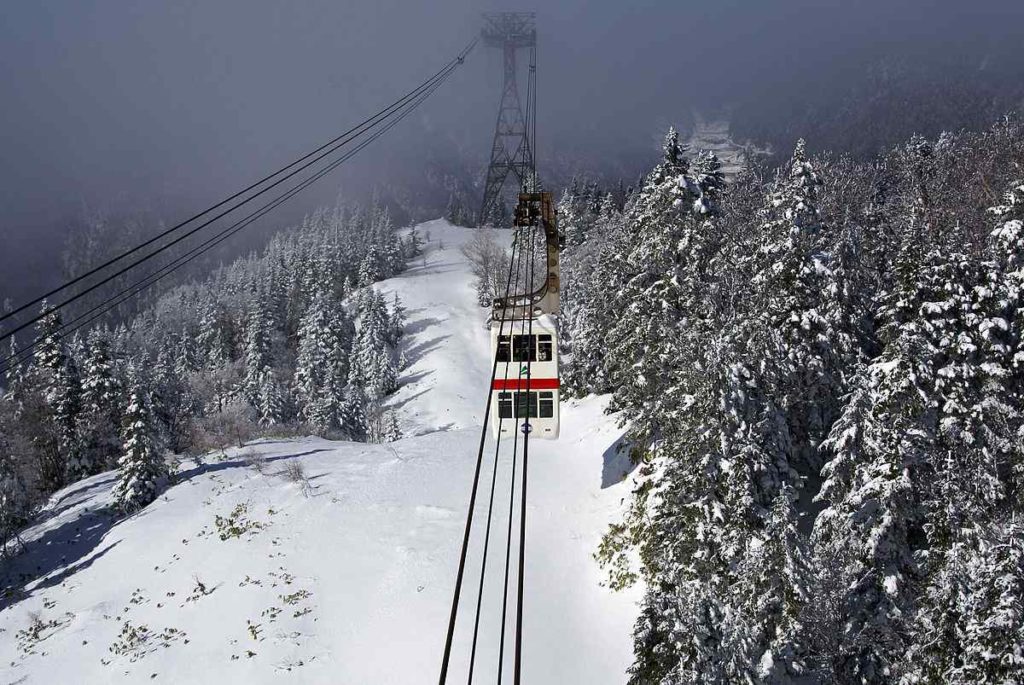 These are the 10 most thrilling aerial lifts in the world. Do post your comments.